SAN FRANCISCO — The Polestar 1 is a 619-horsepower grand touring coupe. It goes further on a charge than any other plug-in hybrid and got 45 mpg in not-exactly leisurely driving. It blitzes corners like a metaphor and is comfortable enough to drive your mother to Kohl's. It's meticulously crafted and looks like hot, sophisticated sex. It's basically everything one could ever hope for in an awesome car with an environmental conscience.

And too bad, you can't have one. Effectively. Only 500 per year will be sold globally with a price tag of $156,000, so although it's certainly possible, you'll need all that cash and a strong elbow to work past that guy from Oslo ahead of you in line. And judging by the reaction to the car during the press launch, the line might be long. Rarely has a car caused so many heads to swivel and bystanders stop to ask, "What kind of car is that?" It's understandable – it looks the way it does, but there's also an intrigue to the Polestar that goes beyond what you'd get driving an electric green Lamborghini through town. It's the unknown element that piques curiosity, and owning something that causes such a reaction is bound to swell that annual queue past 500.

Interestingly, though, no one seemed to clue into the fact that they were looking at a Volvo. Those who can I.D. an XC90 or S90 will likely spot the family resemblance, though, especially after taking a look inside the Polestar 1, where carbon fiber trim and yellow seatbelts can't hide that it's virtually the same design as an S90. Is that a problem? Well, the disparate price tags of the two cars would indicate it might be. Then again, is your husband looking like Chris Hemsworth a problem? Though not original, it's still handsome as ever, and the quality is there for the price tag. 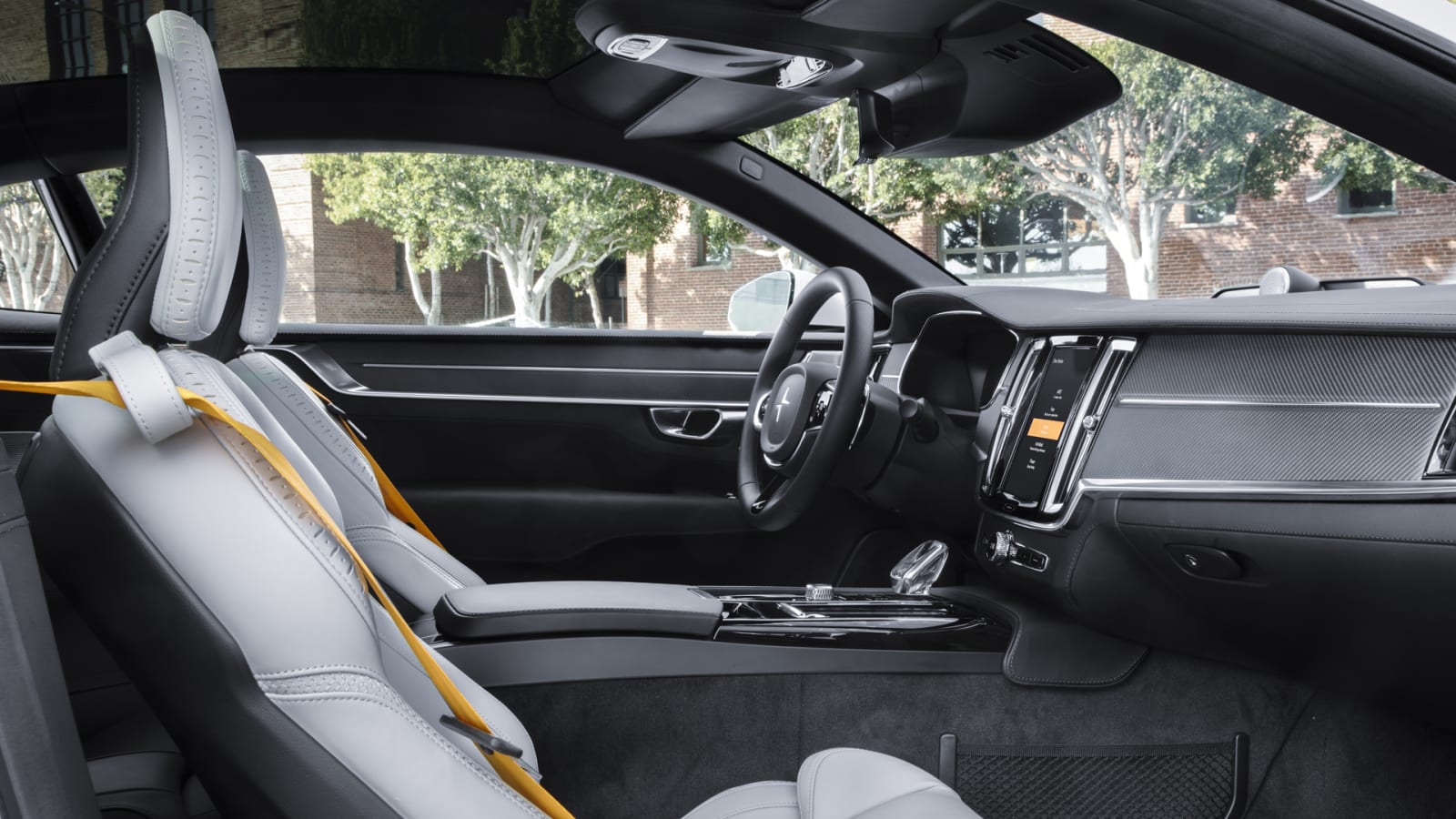 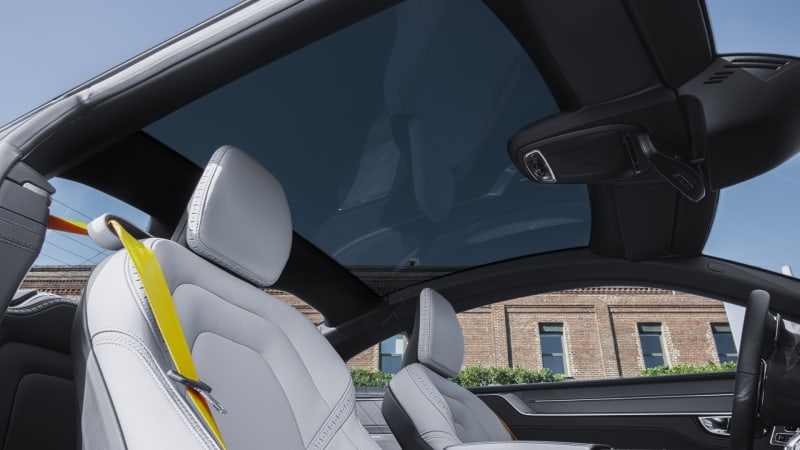 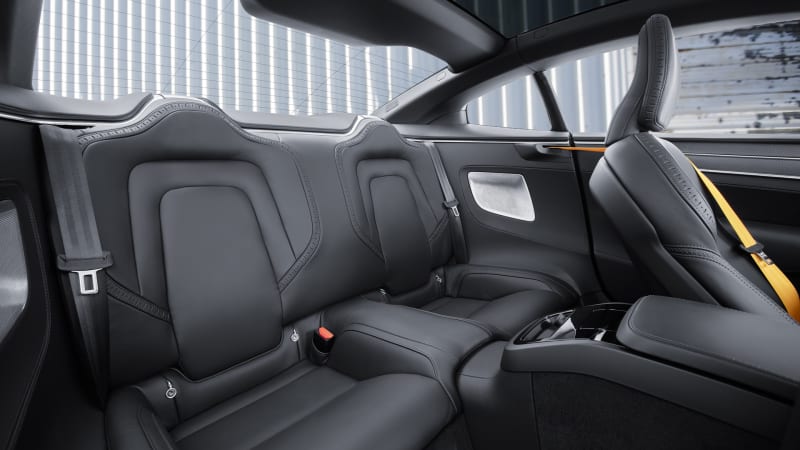 The same thing could be said of the exterior, which is derived from the Volvo Concept Coupe, the car from 2013 that showcased designer Thomas Ingenlath's vision of where the brand could go stylistically. It would inspire the 90 and 60 series Volvos, and now serves as the starting point and halo car for Polestar, the new high-performance, all-electrified offshoot brand from Volvo. That its CEO is Ingenlath himself is evident in the design-focused approach to creating the brand, from the cars to the look of Polestar stores and how they'll be clearly defined from Volvo.

For the Polestar 1, that means looking beyond the styling. The structure is derived from Volvo's SPA platform that underpins the 60 and 90 series cars, but it's effectively sliced, shortened and spliced back together with a carbon fiber cross member dubbed the "dragonfly" that increases structural rigidity by 60%. Then things really get exotic. Most of the outer and inner body panels are carbon-fiber-reinforced plastic, which increases total torsional stiffness by 45% and makes producing that concept car look possible in the first place. Ingenlath says the crisp lines and sharp creases, especially in the hood and fenders, would be impossible without carbon fiber. So would the ultra-low roof. Using steel, or worse, aluminum, would require thicker pillars or a taller, dome-like greenhouse. So, although it isn't obvious the Polestar's made of an exotic material, it just couldn't look as low, wide and damn sexy without it.

It would also weigh 506 pounds more, which is an especially big deal when you consider there are a pair of battery packs aboard – one under the center console, the other atop the rear axle for a total capacity of 34 kWh. Their weight is not only negated in part by the carbon fiber's savings (total curb weight is 5,170 pounds), but combines with it to dramatically lower the car's center of gravity and contributes to a rear-biased weight distribution of 48/52. Both are evident behind the wheel, contributing to a planted, balanced car that'll make you start hunting hairpin turns, eagerly seeing if you can go even faster next time. You probably can. The grip is astonishing. 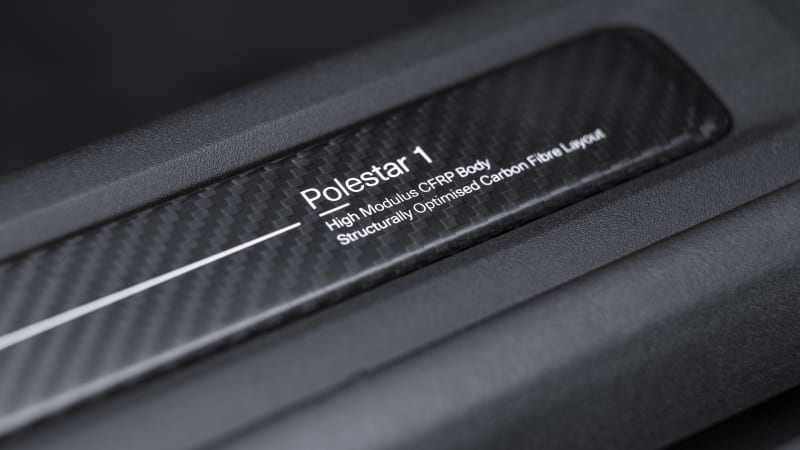 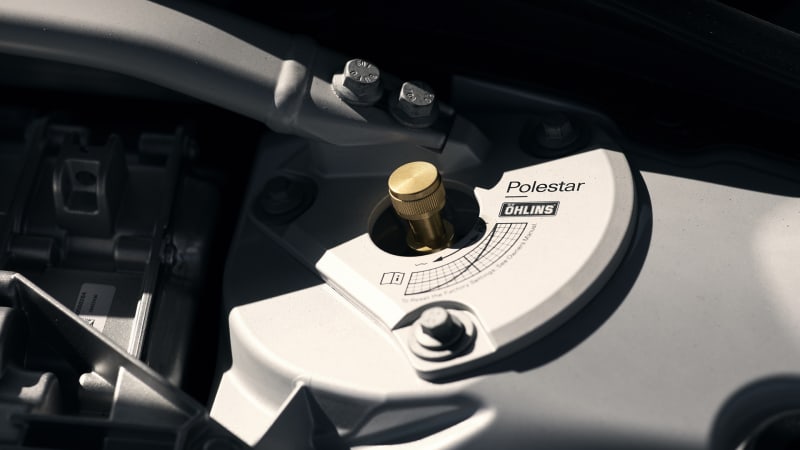 There's more than just weight distribution at work, though. Rather than follow the trend of electronically controlled adaptive dampers, Polestar utilizes Öhlins Dual Flow Valve manually adjustable dampers. There are literally little knobs adjacent to the shocks that can be turned to select among 22 settings. Polestar recommends three combinations, including the firmer "Performance+" set-up (2 front, 3 rear), softer "Dynamic" (15 front, 16 rear) and the Goldilocks factory setting dubbed "Performance" (9 for the front, 10 for the rear). We drove exclusively with that, and at high speeds, the suspension is astonishing, delivering on the Bay Area's garbled concrete highways a ride superior to a big-wheeled 90 Series Volvo, while also aiding the ongoing hairpin endeavor.

Ingenlath says the Öhlins dampers are "an example of us being dedicated to a very classic, beautiful piece of mechanical engineering" rather than relying on 1's and 0's. Fair enough, but at lower speeds, the "Performance" ride is prone to tiresomely firm reactions on the even-more-garbled pavement of the Bay Area's surrounding mountain roads. Perhaps turning the knobs to 15 and 16 would make a difference, or finding your own Goldilocks combo not possible in a car with electronically controlled dampers, but how many people will do the R&D to figure that out? Maybe it's just enough that they can, and maybe that's better than a suspension button on the dash few people will press any way. 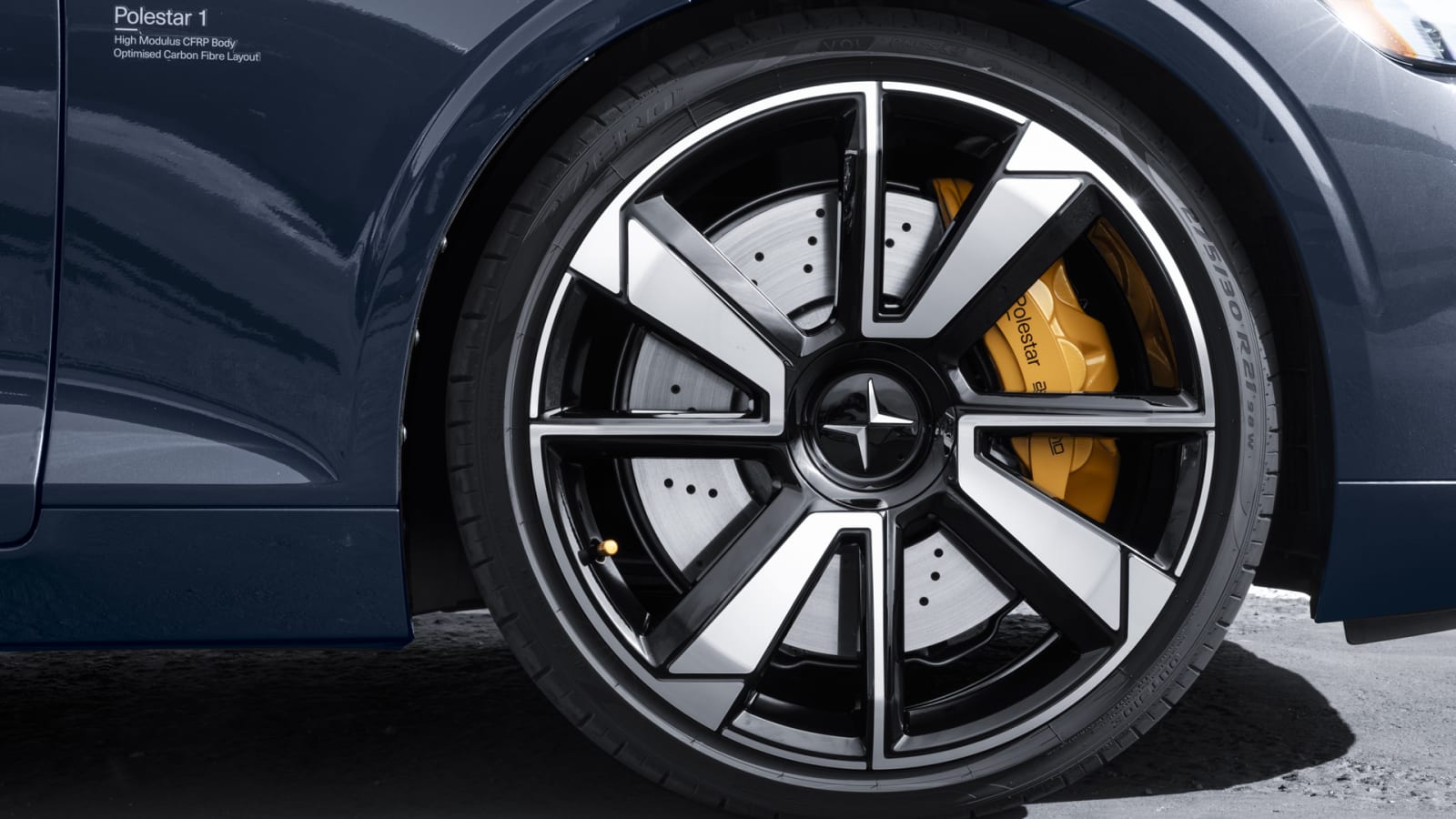 Sticky Pirelli P Zero tires wrapping standard 21-inch wheels do their fair share of keeping the Polestar cemented to the pavement, but there's also the torque-vectoring achieved by the pair of 85-kW electric motors and accompanying planetary gearsets at each rear wheel. Together they produce 232 horsepower, and with the ability to spin at different rates, the outside wheel can move faster to encourage rotation and discourage understeer.

Oversteer is then mitigated by the front axle, which draws its power from Volvo's turbo- and supercharged 2.0-liter inline-four that produces 326 horsepower and 384 pound-feet of torque.  Volvo's familiar eight-speed automatic is aboard, too, but there's an integrated electric starter-generator that adds a dollop of extra power itself. The Polestar's total system output is 619 horsepower and 738 pound-feet of torque. It'll hit 62 mph in 4.2 seconds, which is hardly eye-popping for a high-dollar electrified car, but it's Polestar's belief that "electric vehicle performance is not just about straight-line acceleration and speed." Take that, Ludicrous mode.

That's a fair enough take, and indeed, the Polestar 1 certainly achieves handling heights that Tesla doesn't reach. Still, its straight-line acceleration doesn't feel as quick as its huge power output would indicate. It's also unusual, not necessarily in a bad way, and very much depends on what powertrain mode is engaged. "Hybrid" mode runs the Polestar on its electrified rear as much as possible, but engages the gas front if necessary. "Power" mode keeps both on all the time. When you floor the throttle in either, you get the odd sensation of the car accelerating quicker than the engine noise would indicate. It's like getting hit with a Neptunian tailwind. 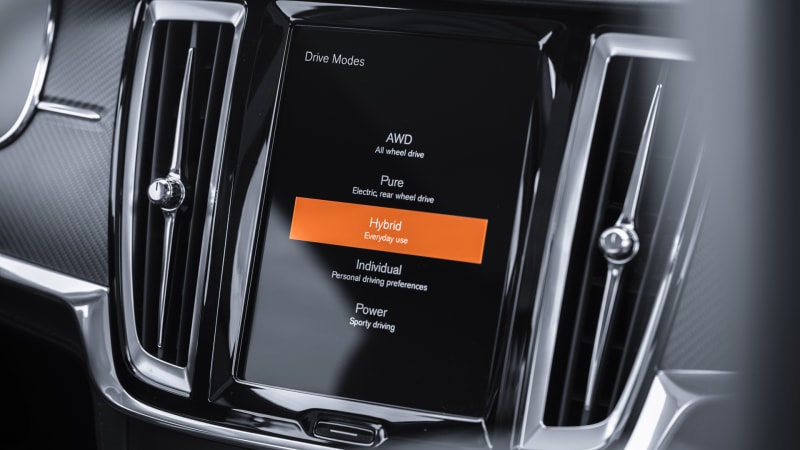 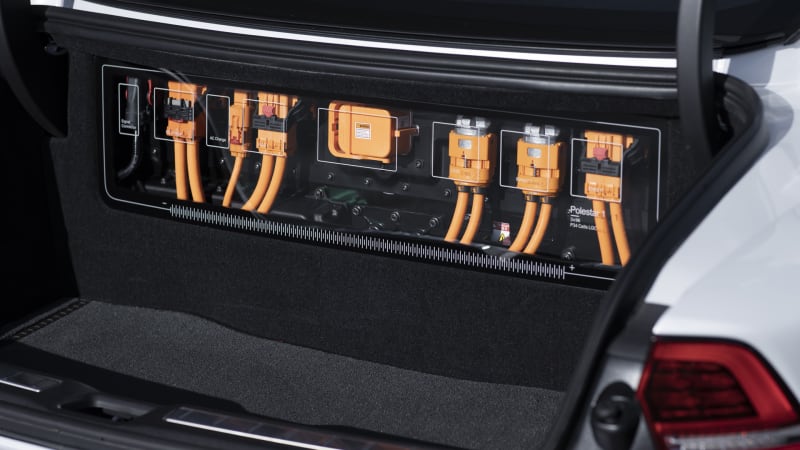 It definitely accelerates like an electric car in those modes, albeit with a subdued gas soundtrack, but operating in the all-electric "Pure" mode (the engine will not engage) shows just how much the burly inline-four is shouldering. While you get the same right-now, ultra-smooth torque hit of electric motors, acceleration is more like a Chevy Bolt than a Tesla Model S – impressively ample but not awe-inspiring. That's not really surprising as 232 horsepower isn't much. You start to lose steam as speeds rise, or basically right as the gas engine would fill in the missing horsepower and add an ample serving of extra torque for good measure.

Really, that it can perform so capably on electricity alone is commendable for a hybrid – the Lexus LC 500h certainly can't – and with 60 to 75 miles of all-electric range (official EPA estimates are still TBD), it goes further than any other PHEV. At the same time, given that gas engine, it can go an estimated 520 total miles and can be immediately refilled when empty. There's no need to sit at a Chili's for an hour while its 50-kW fast-charging capability does its thing. There's frankly merit to the plug-in hybrid concept even if it might come across as less-than, especially considering the price tag.

And alas, sticker shock really is the hangup with the Polestar 1. It's a phenomenal car and deeply desirable, but it also costs more than a loaded Tesla Model S and about the same as a Porsche Taycan Turbo. It's also a 2+2 coupe with Mustang-like back seat space and a trunk far less useful than even a Lexus LC's. Even if there are no options apart from $5,000 matte paint, even the well-heeled are bound to raise an eyebrow. Now, all that carbon fiber certainly goes into that cost and won't be found in those aforementioned all-electrics. Nor will the quality of materials and craftsmanship. Every 1 is hand-built in a new, dedicated Polestar facility in Chengdu, China, intended only for high-dollar halo cars like the current Polestar 1 and its all-electric successor the company has confirmed is eventually coming. That factory will only and can only produce 500 cars per year, and there's always a price to be paid for exclusivity.

In the end, though, the car itself matters less than what it represents and the direction it points toward. It's indeed a halo car, the aspirational model, the Beckhamian kick to get the ball rolling down the hill. Its goal is to make the name Polestar visible and desirable enough so that a great many more people will form a line for the Polestar 2 coming in July 2020 that'll eventually have a price range between $40,000 and $65,000. The Polestar 3 SUV-ish model is set to be shown next March in Geneva. Those and every other future Polestar will be 100% electric, making the Polestar 1 the brand's first and last plug-in hybrid. At least it's a great one.