Price changes throughout A7 and S7 lineup Back to the plug-in hybrid, its 2.0-liter turbocharged four-cylinder is bolstered by an electric motor tucked between the engine and seven-speed dual-clutch transmission. The electric motor is fueled by a 14.1-kWh lithium-ion battery pack under the rear load floor. Output comes to 362 horsepower and 369 pound-feet of torque, which is 27 horses more than the mild-hybrid A7, and an equal amount of torque. The A7 PHEV takes 0.5 seconds longer than the mild-hybrid to reach 60 miles per hour, reeling off the dash in 5.7 seconds instead of 5.2.

In return for more leisurely acceleration, the third PHEV in the Audi U.S. lineup offers three driving modes, including one offering pure electric motoring. And as an added bonus, it qualifies for HOV-lane access in some states. We don't have an electric range number for the A7 PHEV yet; Audi says it will release EV range and final fuel economy figures closer to the car's on-sale date in the fall. The A7 uses several methods to maximize battery and fuel efficiency such as setting EV mode as the default on startup, using a heat pump with the climate control system, and tying the powertrain into the navigation system to optimize electricity use while driving in Hybrid mode. Drivers also get visual and haptic feedback from the the MMI and accelerator to encourage efficient driving.

Outside, Premium Plus automatically dresses up the PHEV in S line garb including revised front and rear fascias, illuminated tread plates, LED headlights and a suspension lowered 20 millimeters. The Premium Plus also gets a number of choice Audi technology as standard such as Audi's virtual cockpit, a 360-degree overhead-view camera system, four-zone climate control, and Audi's Integrated Toll Module. The Executive Package adds ventilated front seats, heated rear seats, adaptive cruise control, and Audi active lane assist with emergency assist to the Premium Plus. The Prestige increases the haul of standard equipment with features from the Executive Package as well as a heads-up display, power soft-closing doors, and dual-pane acoustic glass. The cherry on the top trim is the Luxury Package with extended leather, and individual front contour seats in Valcona and Milano leather with massaging functions. 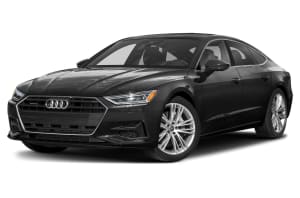 Compare the 2021 Audi A7 side-by-side against similar vehicles