More tech, more performance and more foot massagers can be found in this revised S trio I've been deposited in the dank, redwood-dominant Santa Cruz mountains in Northern California to sample a trio of vehicles occupying the coveted middle child/Goldilocks position in Audi's performance-oriented lineup. The 2020 Audi S6, Audi S7 and Audi S8 slot in-between hardcore, track-focused RS models and the sporty S-Line versions of the respective A6, 7 and 8 that are essentially appearance packages for those who want the show but are OK without the go.

In the S6 and S7 fraternal twins, driving enhancement is accomplished through the addition of clever, technological wizardry. First and foremost, this includes the marque’s first local application of its "electric powered compressor," a battery-actuated gewgaw that helps pack even more cool air into the cylinders of the twin-turbocharged 2.9 liter V6, yielding 444 hp and 443 lb-ft of torque. These results are down 6 hp but up 37 lb-ft from the blown V8 that reigned in the previous models and come with a slightly less menacing exhaust note. On the other hand, there's mid-4-second 0-to-60 performance, and fuel economy is improved by 20%. The S6 (pictured above) and S7 (pictured top) also include performance brakes, an upgraded air suspension, bolstered seats with available massaging, shiny silvery mirrors, double grille slats up front, and quad pipes out back. And they can be ordered with a sport handling package that includes all-wheel steering with a variable ratio in front, and a trick differential in the back that adds wheel-to-wheel torque vectoring to the Quattro all-wheel-drive system. For the truly bold, a steel sport suspension with adaptive dampers can be ordered.

This bagless setup isn't recommended, though, as the ride is a bit too harsh. It's too RS for the S. In fact, though I'm generally a full-tilt type, it's easy to be smitten with the performance of the “regular” S6 and S7. These cars both have an unexpectedly magical steering feel, one that is distinct from the befuddling intangibility of competitors in the BMW 5 Series range and the slightly more lugubrious tenacity of that in the Mercedes E-Class lineup. It is light and lithe, but perfectly on target, almost relaxing. 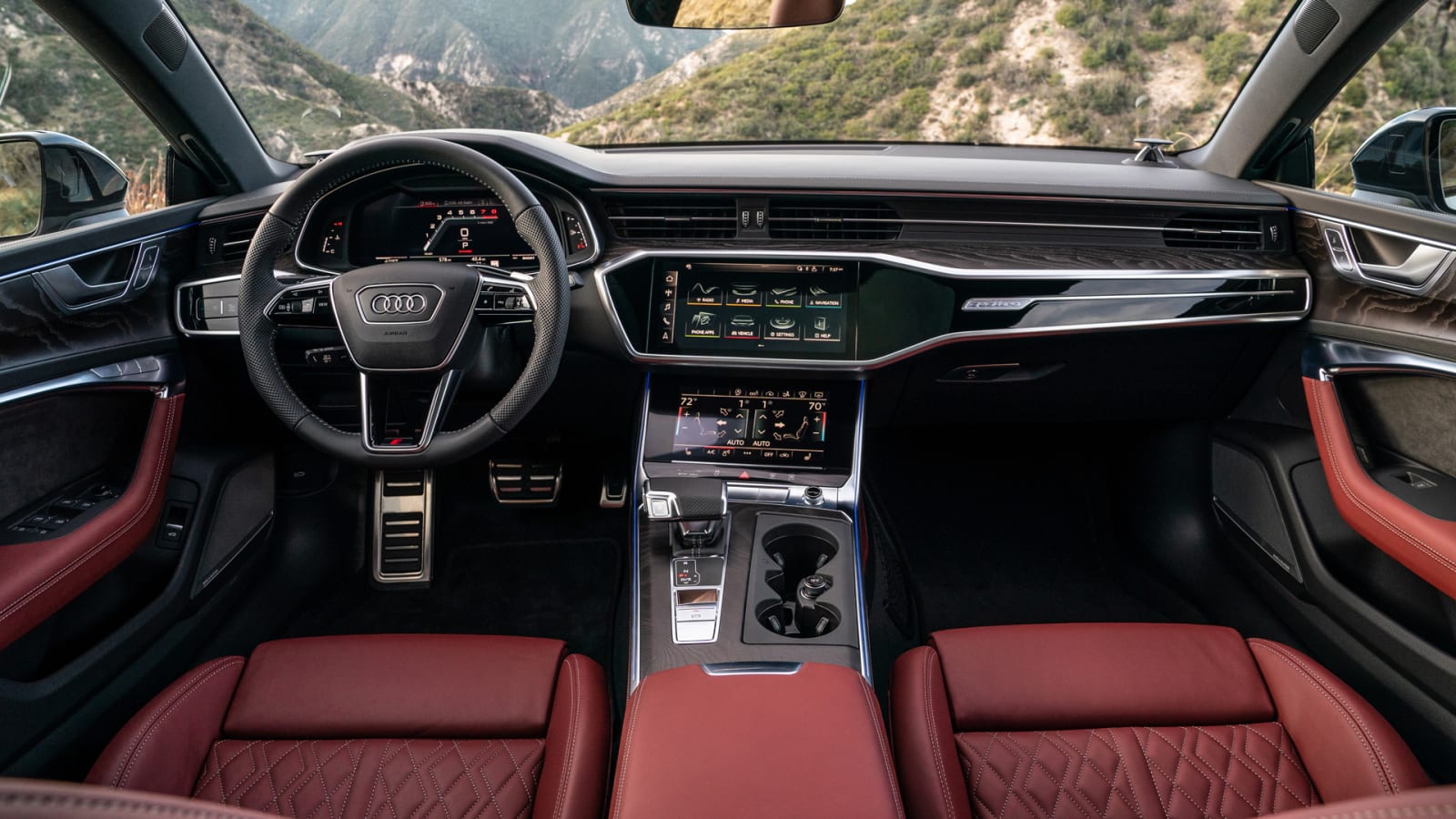 In fact, the harder these cars are driven, the easier they are to control. Not that we ever breeched 7/10s. We were on public roads, there had been heavy rainstorms the week before that downed trees and washed out culverts, and there were a multitude of road crews clearing the wreckage, not to mention paved surfaces that were still sweating mud. (Also, nannying locals attempting to demonstrate the proper way to not apex in their dawdling Priuses.) But there was a rewarding simplicity to driving these cars speedily at speeds that were only marginally extralegal, in part due to all of that usable lowdown torque. At one point, my driving companion sighed, but not because I was nauseating her with mountain bend carving. Rather, she said, “No, I was just enjoying the smooth rhythm.” Smooth Rhythm could be the name of the Yacht Rock band fronted by these two Audi S siblings.

I gravitated toward the better-looking S7 hatchback. This was entirely expected, as I tend to be significantly biased toward things that are more handsome, more expensive, and offer a tighter (reference redacted because children might be present. -Ed). It certainly does cost more at $84,895, versus the S6 at $74,895, and with its blunt-reared, 50-caliber shape, it attracts more attention. And I do like attention. The S6 is very good for those of you who aren't flashy. Which brings me to the S8 (pictured above). This $130,000 super-sedan has a job description that seems founded in the deepest reaches of late-stage post-industrial capitalism, taking on the responsibilities of a whole team of people while earning the title and salary of only one. Because Audi has discontinued the exclusive 12-cylinder A8L that used to reign regally over the lineup, and because there is no RS8 model above it in the performance ladder, the S8 has to be both the ultimate expression of luxury and the ultimate expression of speed, a kind of cashmere-sweatered lightning bolt.

With 563 hp and 590 lb-ft of torque from the 4.0-liter twin-turbo V8, it feels significantly faster than its smaller siblings. And it is, hitting 60 mph from a standstill in a whooshing 3.8 seconds – not bad for something that weighs as much as one of Saturn’s moons. Moreover, it executes these runs with improbably regal comportment, a result of its standard 48-volt "predictive active suspension," which is able to glance down the road with its more than two-dozen sensors, and tilt or untilt the car in advance of and response to bumps and curves. It can even lift the S8 a few inches when it senses an imminent crash to maximize crumpling impact absorption; also, to aid in ingress and egress so I don’t rumple my Billy Porter tuxedo gowns (Yep, I needed to Google that, too. -Ed). 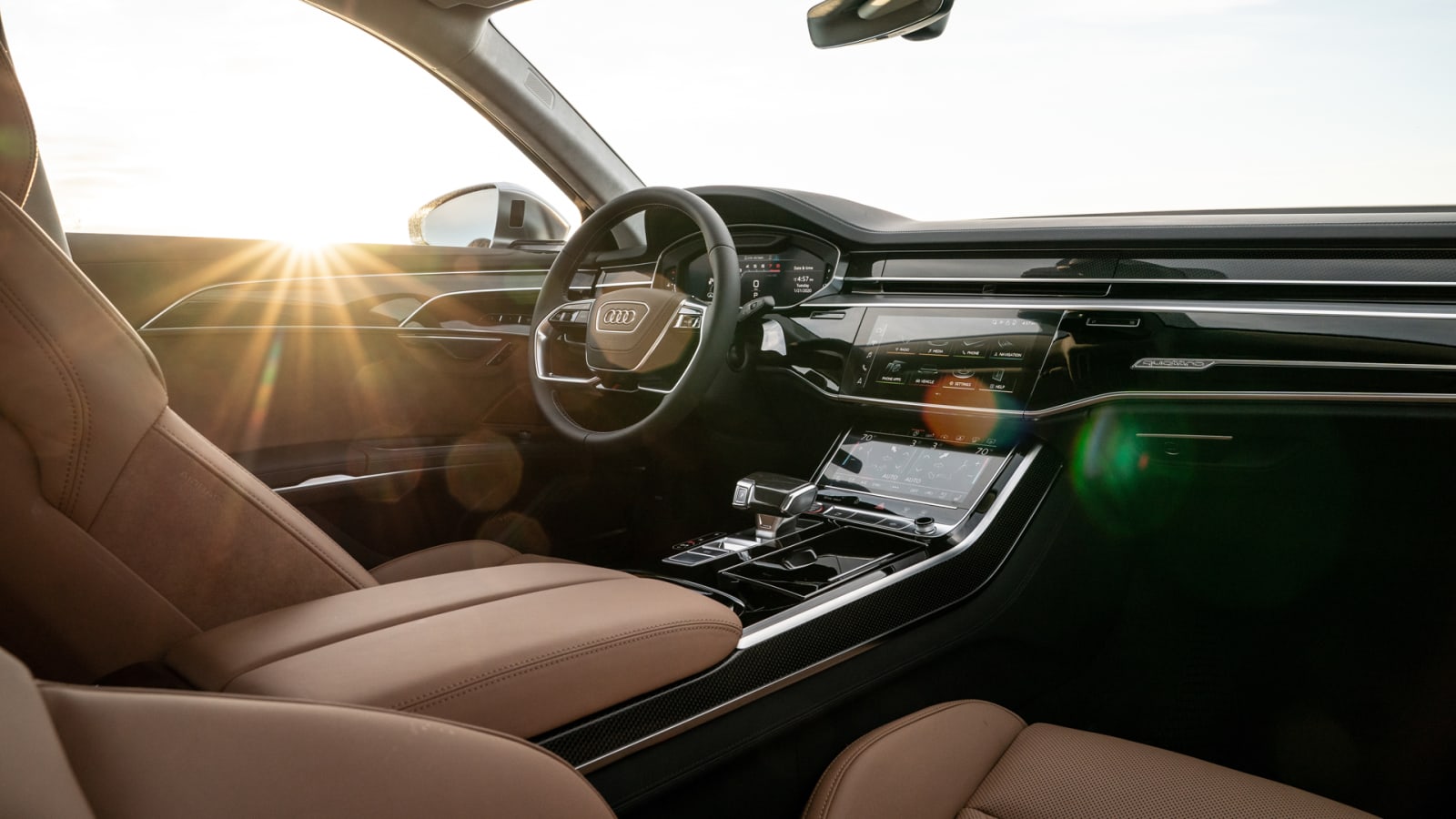 And was it mentioned that the S8 has laser headlights that can sear raccoons into jerky, the standard inclusion of all the sporty torque vectoring differential stuff from the S6/7, and available carbon ceramic brakes if you feel like ponying up thousands of dollars for something you’ll literally never need? Oh, and four-wheel steering.

This last feature is the one that was noticed most — but only because our test car lacked the Executive Seat Package that provides a heated foot massager for the right rear passenger, and my preference for shoeless exploits has already been documented. The S8 is available here in the States only in extended long-wheelbase iteration, which measures a grand 209 inches from tip to tuchus, just an inch shy of a Lincoln Navigator. In typical, or even spirited driving on bobbing weaves, one doesn’t exactly sense that length, because it’s muted by this technological four-wheel magic. But on tight 180-degree switchbacks through the glossy mountains, it makes itself known in uncanny ways, making it feel like the rear of the car is trying to pull up into the front seat. The lesson being, certain large items — bank vaults, saturnine moons, the Audi S8 — shouldn’t be hustled too quickly. It’s against their nature and disruptive, in a disconcerting way.

So will an S suffice? It'll be exciting to try out the next-generation RS6 and RS7 when they inevitably join the RS6 Avant wagon in its V8 goodness, plus a new, up-powered S8 Plus, which also seems inevitable. But as history has shown, those cars can be too much, wonderfully or punishingly so. As a middle child, I’ll take the middle of the middle: the S7.