Road tripping the most rugged RAV4 from Portland to Victoria and Vancouver, B.C. This 2020 Toyota RAV4 TRD Off-Road would spend more time on boats than off road. The Falken Wildpeak A/T Trail tires would be more noteworthy for their elevated road noise than their puncture resistant design or severe snow rating. My selection from the Multi-Terrain Select system among Mud & Sand, Rock & Trail and Snow was always "none of the above." Admittedly, then, driving from Portland, Ore., to Victoria and Vancouver, B.C. with a few ferry trips along the way is hardly a tall task for the RAV4's new, most-rugged trim level.

Part of me knows this is a bit lame (or a lot), but the rest knows that if you're really game for serious off-roading, no amount of upgrades to a RAV4 will make it a great choice. You'll find better approach/departure angles and a 4WD Low setting in a Jeep Cherokee Trailhawk, while a used 4Runner would be the obvious Toyota alternative for similar money. That said, the new-for-2020 RAV4 TRD Off-Road has plenty of appeal, especially for folks who like the idea of a rugged, off-road ready SUV but know that A) they're unlikely to take it off-road much and B) appreciate the RAV4's superior fuel economy and family-friendly space. Basically, folks like myself.

The looks at least make a strong impression, building upon an SUV that already saw a welcome injection of ruggedness for its most recent generation — most notably the RAV4 Adventure. That trim donates its high-rise roof rails, larger fenders, bumper/grille designs and 8.6-inch ground clearance, but the Falken tires and lighter, more rigid matte-black 18-inch wheels are exclusive to the TRD. So too is the color combo you see here: Magnetic Gray Metallic paired with an "Ice Edge" contrasting roof. The interior's red accents are unique to the TRD as well. It all looks the part, much like the Cherokee Trailhawk, which is a credit to the current RAV4's design. No Honda CR-V could pull off such a trim level. 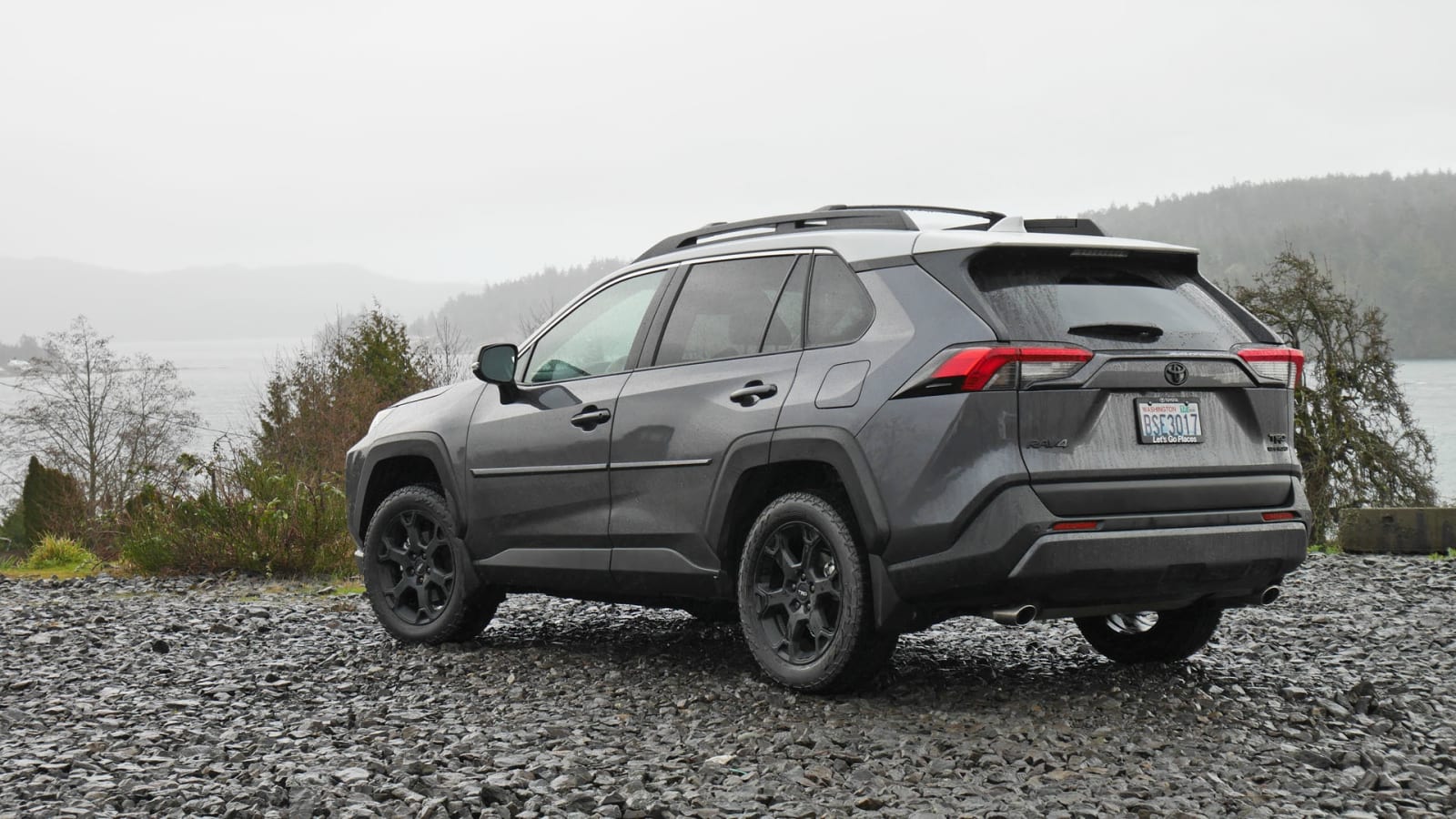 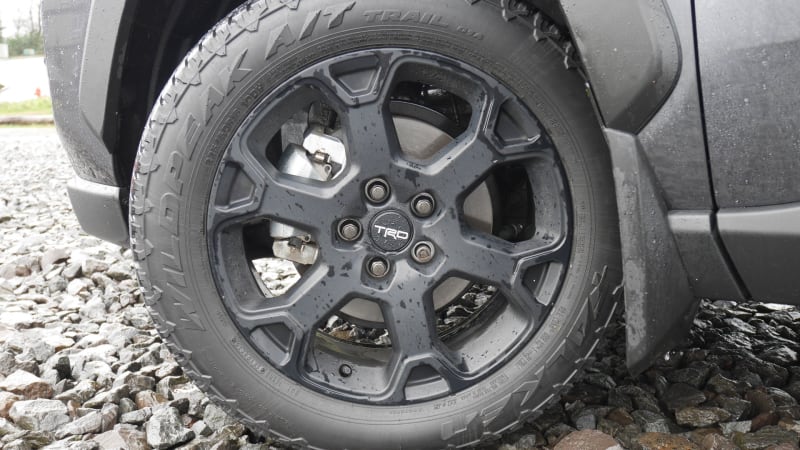 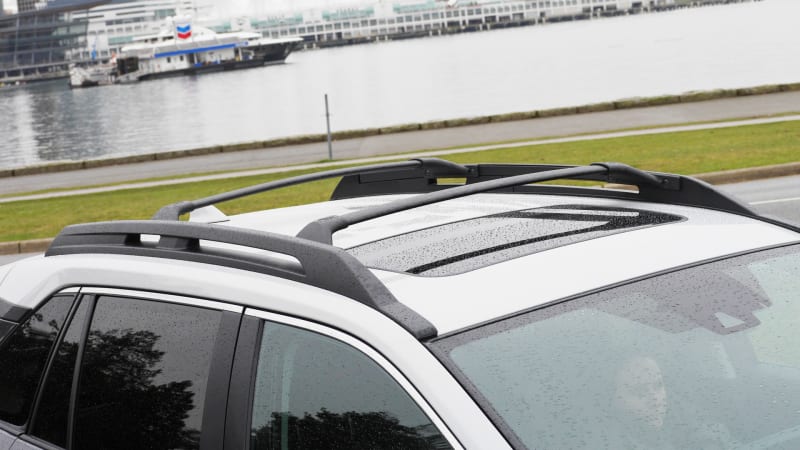 Driving north from Portland on Interstate 5, it's immediately apparent that noise is a major reason for thinking twice about the TRD Off-Road. The large roof rack creates more wind noise (you may want to take off the cross bars if not needed), especially with the sunroof shade open, and the 225/60R18 Falken tires' all-terrain tread and compound growl deeply over Washington state asphalt. It's not 4Runner TRD Pro noisy, but it's noticeably less serene than other RAV4s.

Not helping things is the 2.5-liter four-cylinder found in every RAV4. Though on paper its 203-horsepower is best-in-class for a base engine and likely boasts acceleration times to match, it doesn't sound or feel like it. It's course and a bit whizzy, while lacking the low-end punch of the Honda CR-V or other turbocharged competitors. It's without question the RAV4's sorest spot, but at least it's paired to a smart-shifting eight-speed automatic rather than the CVTs found in the CR-V and others.

The standard adaptive cruise control does a good job of braking and accelerating in a natural way, but the distance to the car ahead is too far on the interstate. The CR-V keeps things tighter and also provides steering assist, doing most of the steering for you with just a token finger on the wheel — the RAV4 just prevents you from leaving your lane and will ping pong between lines. The ACC is better on the winding, two-lane Highway 101 from Olympia, Wash., up to the ferry terminal in Port Angeles as the system tightened up distances considerably. Unfortunately, the engine is no less deserving of a sad trombone when making a pass on the two-lane road: the transmission downshifts as needed but when foot hits the floor, the RAV4 creates more noise than thrust. 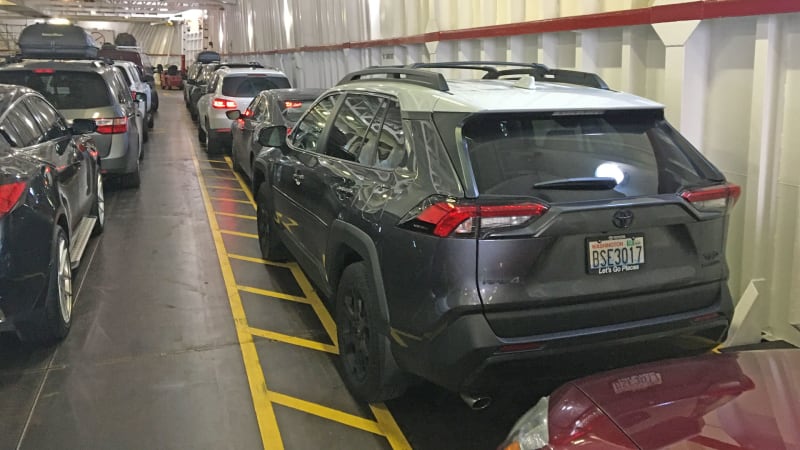 We eventually arrive in Port Angeles and wait to board the MV Coho, which has been plying the Strait of Juan de Fuca since 1959. Looking around the cabin, I once again appreciate the new RAV4's interior design: it's interesting to look at, doesn't resort to fake wood or metal trim, and is actually quite functional. The cupholders easily hold my Yeti water bottle, the smartphone bin is big enough to keep phone and wire secure (it doubles as a wireless charger), and the under-armrest bin is big enough to store my football-sized camera bag.

I'm also a fan of the infotainment system. The screen is big, it's mounted high and easy to reach. The radio controls show both presets and song info. The navigation system performs well with guidance superior to what is provided by Google Maps and software that's not dependent on an internet connection — a key attribute when traveling to Canada and when in places with limited coverage. There was a point later in Vancouver when Google Maps had utterly no clue where we were as its car icon floated aimlessly about the map. 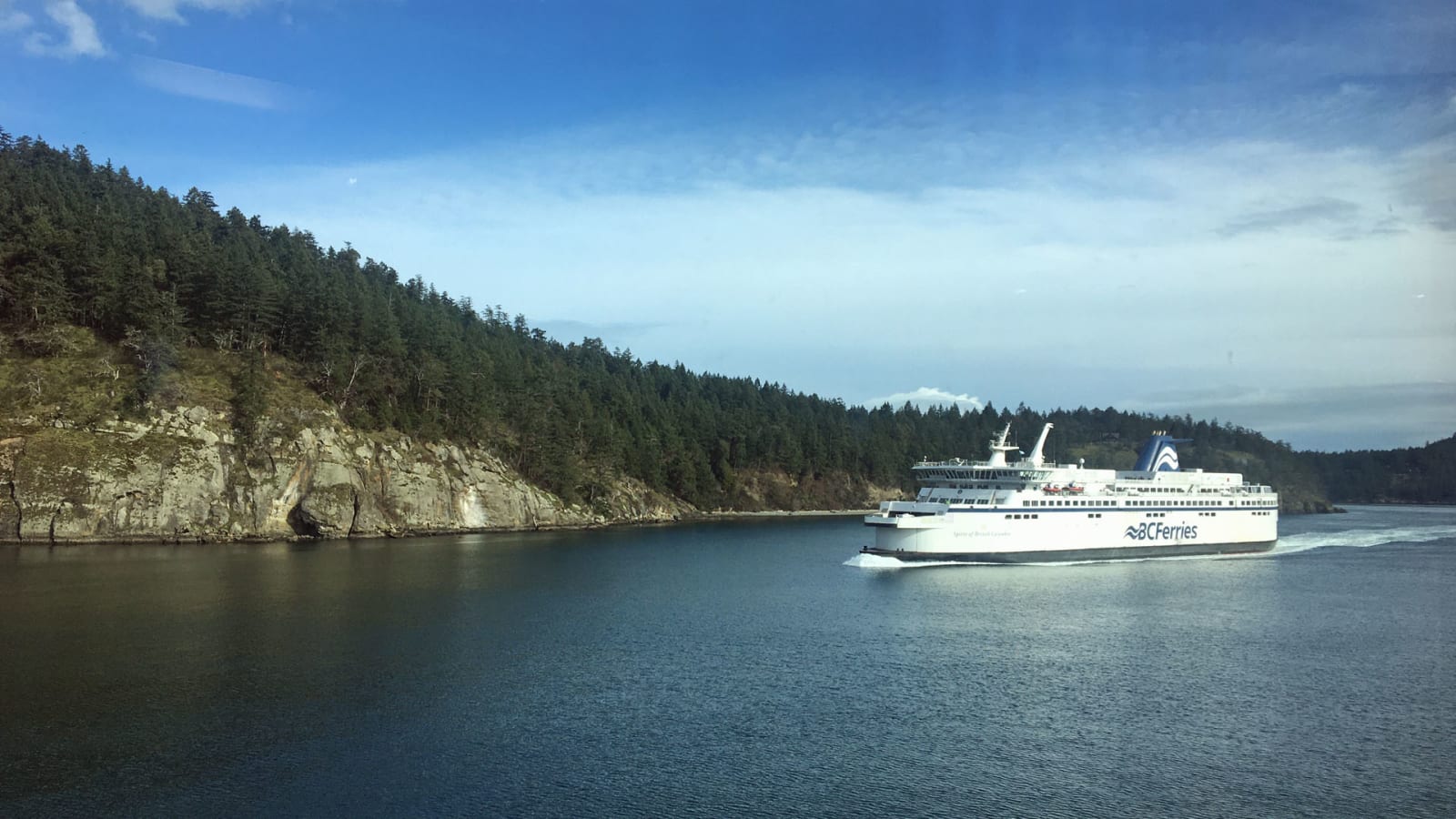 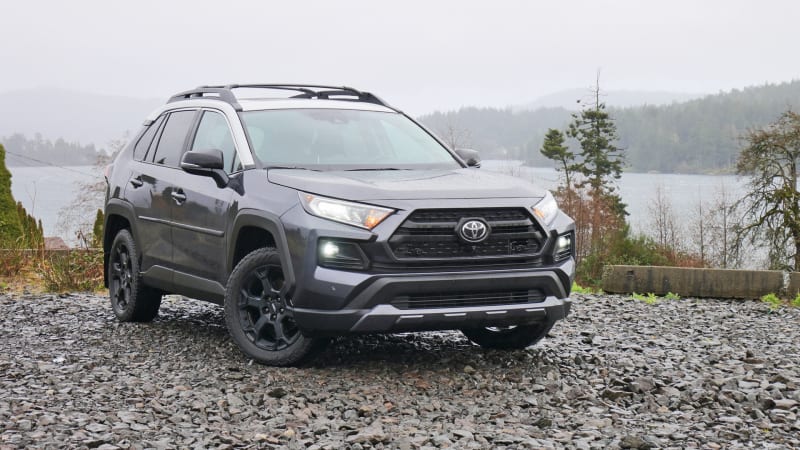 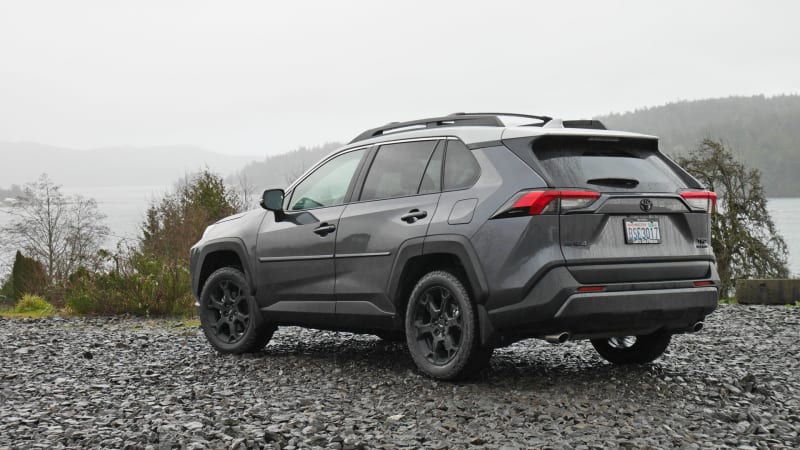 After a night in Victoria, we head north for a drive along Vancouver Island's western coast. The road winds and dips as the Strait's choppy waters peek through the road-lining trees. The TRD Off-Road features a unique suspension with special twin-tube shocks and different bump stops designed to better control body motions over big bumps and dips. Though designed for off-road purposes, there's no obvious degradation of on-road handling, as it maintains its composure and doesn't exhibit excessive body roll. The TRD Off-Road also features the Adventure's more advanced all-wheel-drive system with rear-wheel torque vectoring. Being able to move power front to rear as well as between left and right rear wheels is as much a benefit on road as it is off.

The steering is just as well-tuned as that of every RAV4, with agreeable precision and consistent effort. Selecting Sport mode nudges that effort up an appropriate amount, granting extra engagement and control when driving on a winding road. While the overall driving experience doesn't impress as in a Mazda, it also doesn't bore nor repel, and I ultimately enjoyed my time behind its wheel more than in a CR-V Touring a week later.

After another ferry ride through the beautiful Gulf Islands and across the Strait of Georgia, the RAV4 spends a few days parked in Vancouver while I attend the VW Atlas Cross Sport press launch. The drive back to Portland would be direct and boat-free: a 310-mile straight shot down BC-99 and Interstate 5 passing through Seattle and the rest of Washington. In total, I would travel 710 miles in the RAV4, and throughout that time the seats never faltered in their comfort or support for either myself (at 6-foot-3, the eight-way adjustable driver seat and steering wheel provided a suitable driving position) or my wife (at 5-foot-zip, the passenger seat is mounted high enough to provide a nice view out). I managed to get 31.3 mpg for the trip, which compares favorably to the official EPA ratings of 25 mpg city, 32 mpg highway and 27 mpg combined. I was actually doing better than 32 on the first day between Portland and Port Angeles where speeds were lower on the winding Highway 101.

So, although the TRD Off-Road gets the worst fuel economy of any RAV4, it's still awfully fuel efficient for an SUV, especially when viewed through the lens of off-road-ready vehicles. Just how off-road-ready it is will have to be answered another day and during another road trip, but on this one, it provided the comfort, features and cargo space that was needed. Admittedly, the RAV4 Adventure and its quieter tires would've been a better choice, but with either, you get a compact SUV that provides the expected functionality with more rugged and characterful style that's appreciated no matter where the journey takes you.