The five-seat Atlas is smaller, but still huge. It's more stylish, but still a bit cheap. VANCOUVER, B.C. – You can never have too many SUVs, right? Certainly seems that way considering that more than half of new vehicle sales are going to them, and it's a trend that Volkswagen is seeing in its own lineup, where take-rate percentages are basically mirroring those of the industry at large. Not bad when you consider that VW only offered two SUVs in the United States last year: the Tiguan and Atlas.

That changes with the 2020 Volkswagen Atlas Cross Sport, which despite the name, common architecture and obvious resemblance, is different enough to be considered a separate model from VW's existing three-row SUV. It seats only five in two rows, for starters, and adopts a lower and more rakish roofline that makes it look more muscular and less homely. Overall height is down 2.2 inches, while its length is reduced by 2.8 inches.

Remember, however, that the three-row Atlas is a thoroughly enormous thing born of Volkswagen's apparent ethos that American customers primarily want products that are huge and inexpensive. You know, like a Big Gulp. The Cross Sport is decidedly less adherent to this 7-Eleven philosophy, but is still very large, measuring a whopping 5 inches longer than a Honda Passport with a wheelbase that's 6.3 inches longer. 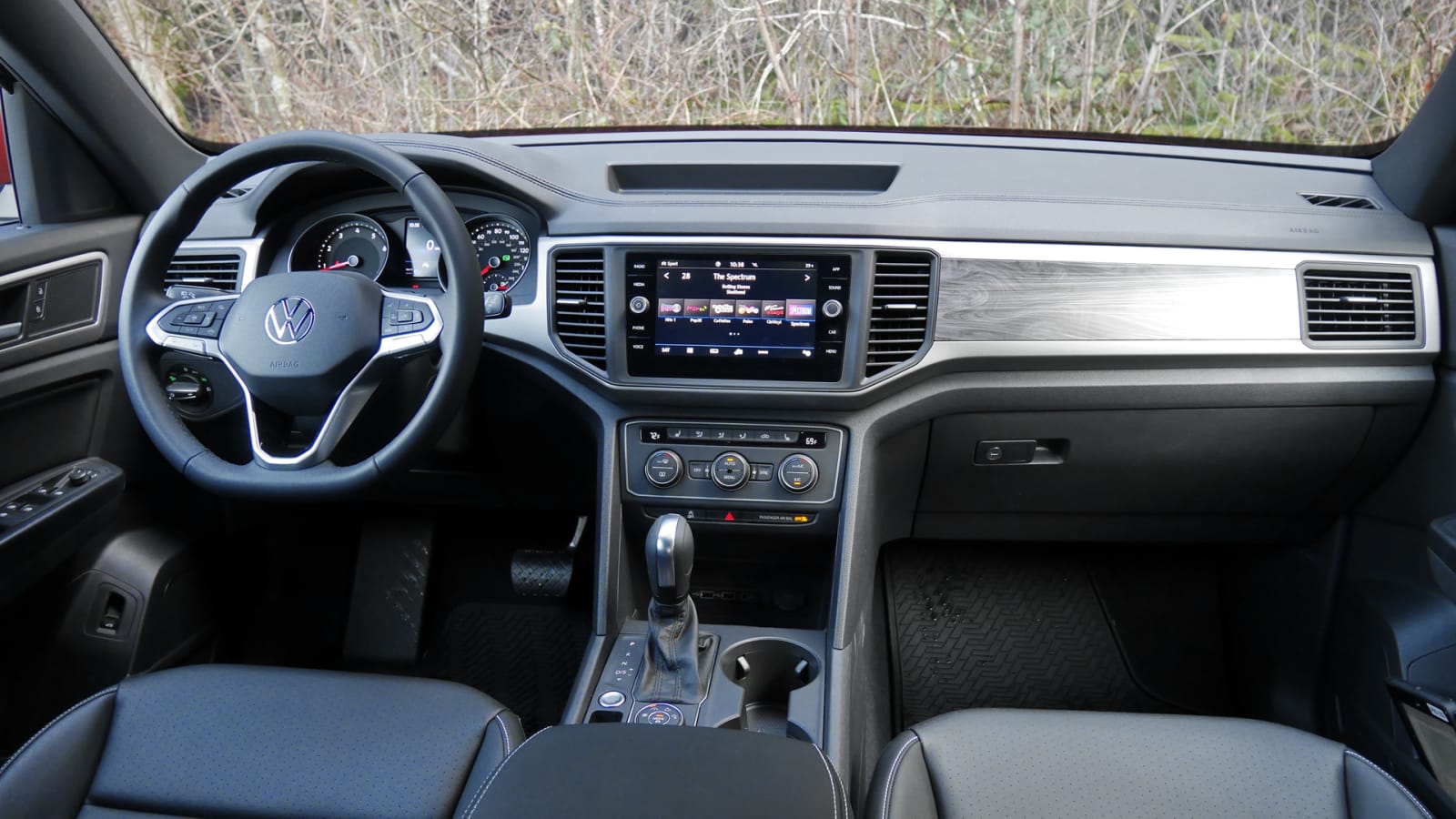 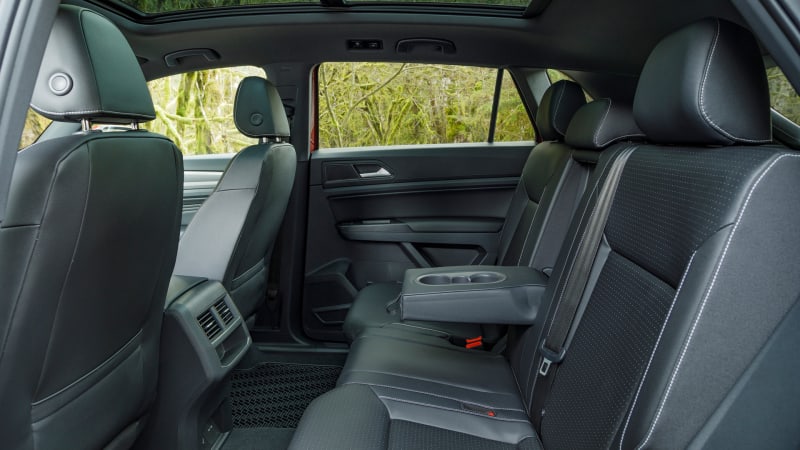 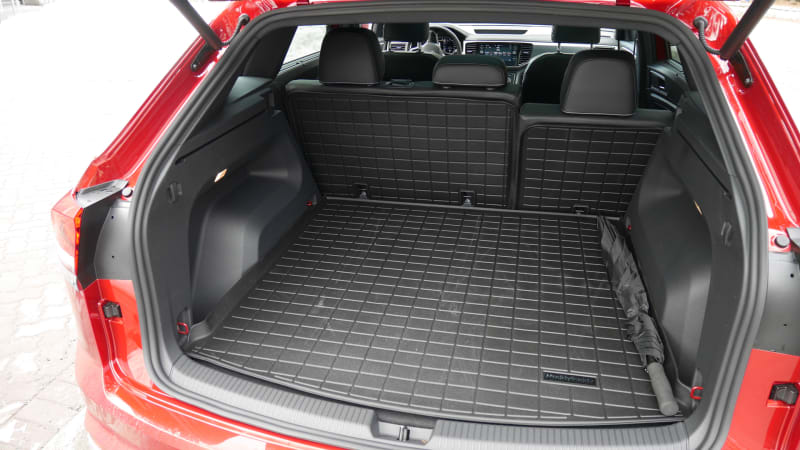 You're well aware of this size behind the wheel. You look through a narrow windshield across a broad, flat hood that stretches out like it's expecting to welcome a helicopter. The ride feels considerably solid and weighty (it weighs only about 100 pounds less than the regular Atlas), with a decidedly Germanic feel. However, there's also nothing remotely athletic about it and it possesses Volkswagen's numb and curiously elastic steering effort. Pressing the Sport button merely adds resistance to the wheel, as if swapping out bands on a SoloFlex.

However, it's inside where the Cross Sport puts its size to use. The back seat has 40.4 inches of legroom, which is actually 2.8 inches more than the regular Atlas thanks to room freed up by ditching the third row. That sounds impressive on paper, but it's even better in person. I positioned the front passenger seat as far back as it could go, and despite me being 6-foot-3, my feet weren't touching the firewall. Then, when seated in the back, my knees weren't touching the front seat back. That's crazy, and in person and on paper, it easily exceeds the Passport and Chevy Blazer (both 39.6 inches of rear legroom). This much space between rows is also a boon when fitting child seats.

There's less headroom than all of the above at 37.8 inches, however, and certain passengers may graze their heads, especially if a panoramic sunroof is fitted. It's a good thing, then, that the back seat also reclines to a luxuriant degree, which increases comfort and pretty much takes care of the headroom issue.

True, reclining the back seat reduces cargo space, but the Cross Sport has more than enough to spare. All that vehicle length is on display in the cargo area, which is noticeably deeper than normal for the segment. For proof of that, it has virtually the same cargo capacity numbers (40.3 cubic-feet with the seats up, 77.8 with them down) as the Honda Passport despite the significantly lower roof (3.8 inches) and a less boxy shape. This likely means the Cross Sport will be a Luggage Test champ, but may not be quite as useful when bringing home that 60-inch TV. 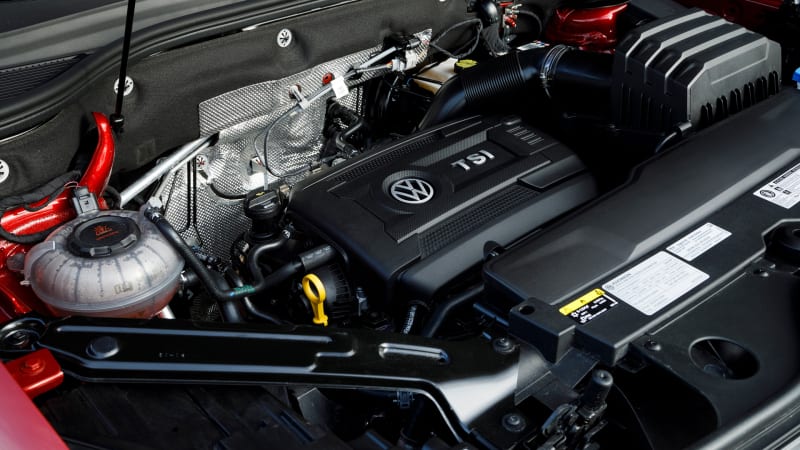 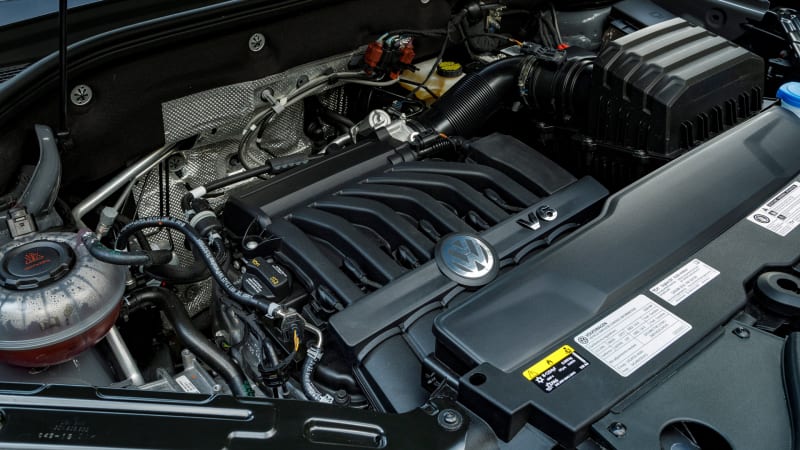 Admittedly, that's a lot of dimensions and space talk, but truth be told, it's really the primary differentiator between the Atlas Cross Sport and Atlas full stop. The engine choices are the same, with a standard 2.0-liter inline-four good for 235 horsepower and 258 pound-feet of torque, and an optional 3.6-liter narrow-angle "VR6" that produces 276 hp and 266 lb-ft. Just as we've discovered with the regular Atlas, neither really holds a performance advantage over the other and neither therefore is especially competitive for the segment. Those 100 fewer pounds should in theory give the Cross Sport an advantage, but we're talking varying degrees of underwhelming. Driving up into the Coastal Mountains from Vancouver to Whistler required a few foot-to-floor moments to pass, and there was never the sort of confidence you get from a Passport, Blazer or even the bigger Kia Telluride.

The V6 is at least smoother, quieter and more in keeping with the premium vibe VW is going for with the Cross Sport (more on that in a moment), but then, the 2.0-liter is more efficient, returning 22 mpg combined with front-wheel drive and 20 mpg combined with all-wheel drive (the V6 is 19 mpg regardless). Now, keen VW Atlas enthusiasts will have spotted another difference in that last sentence. That's right Atlasists, you can get the 2.0-liter with all-wheel drive in the Cross Sport. It remains exclusively paired to front-wheel drive in the three-row model. Extra choice is rarely a bad thing, so why not, but it's also not something that really moves the needle. 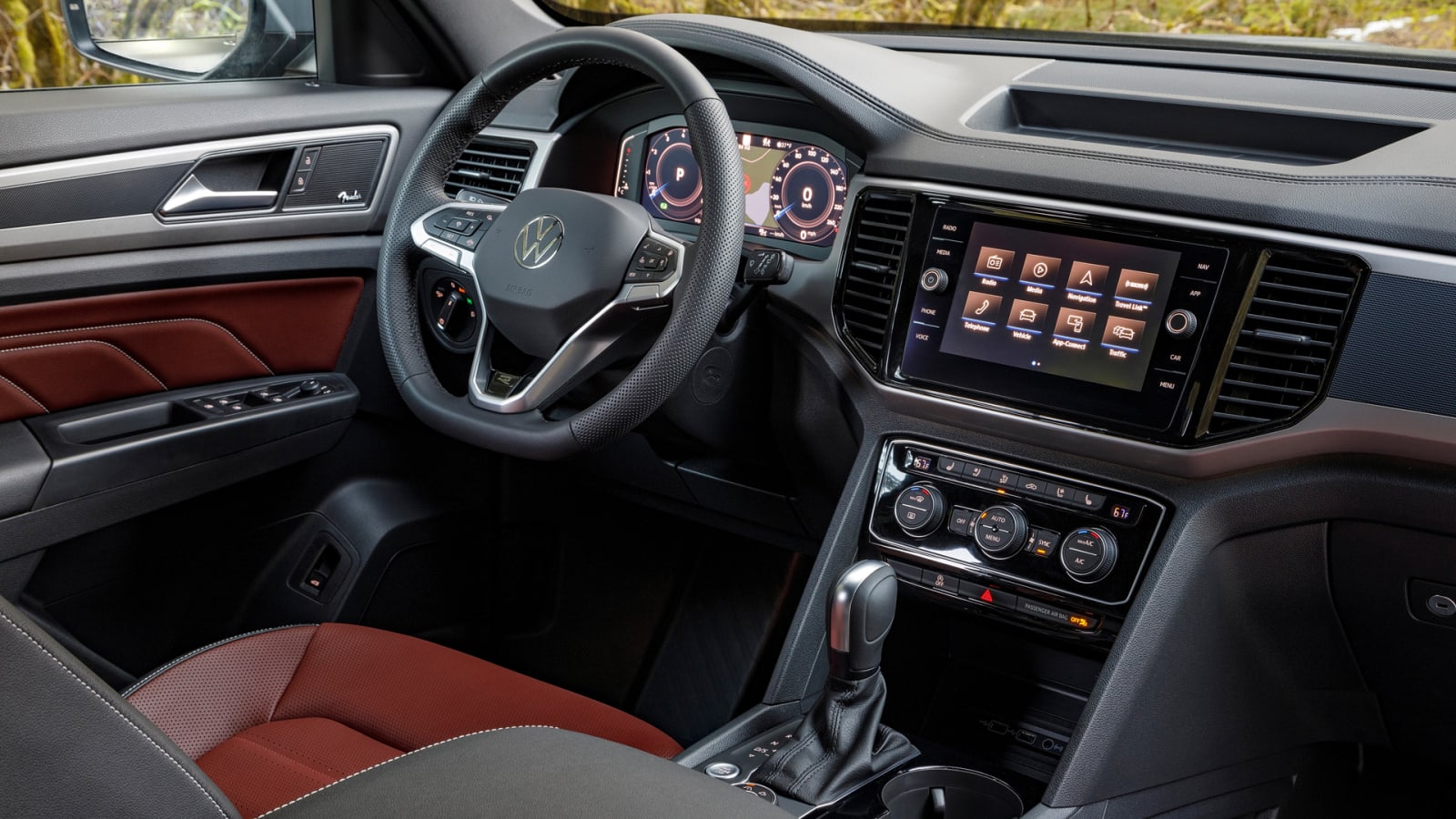 Inside, the Cross Sport has the same plain-jane cabin design as the regular Atlas, although VW at least spruces things up by offering bolder color combinations not available on the seven seater (most notably a two-tone combo of black and deep red with white contrast stitching). Nothing is done about materials quality in general, however. There's more hard, cheap plastic throughout than you'll find in rival models, especially in the back seat where rock-hard plastic door sills contrast sharply with soft-touch ones up front. That's an acceptable cost-saving trick for a $20,000 compact car, not a $40,000-$50,000 SUV with premium aspirations.

Indeed, there was scarcely an increase in "premium ambiance" between the lightly equipped Atlas Cross Sport SE and loaded SEL Premium we tested. The latter's metal-look plastic cabin trim was no fancier than the SE's wood-look plastic. Even the SE's leatherette upholstery looks and feels like leather, making the SEL's real stuff less of an advantage. The one appreciable visual upgrade is the all-digital instrument cluster standard on the SEL trims and up. 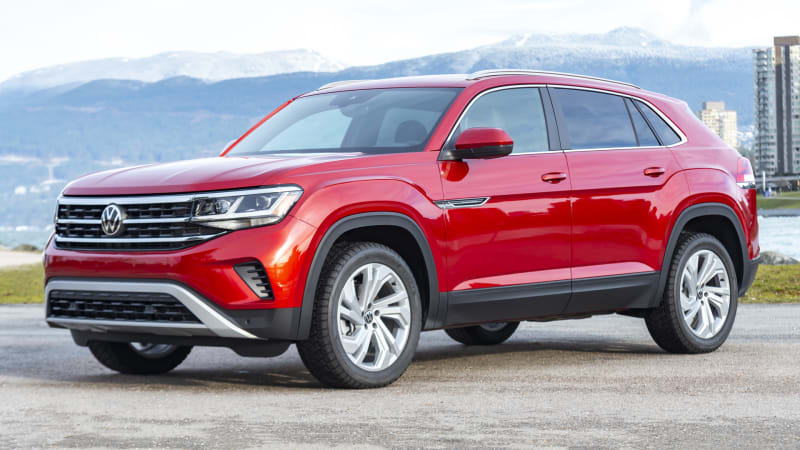 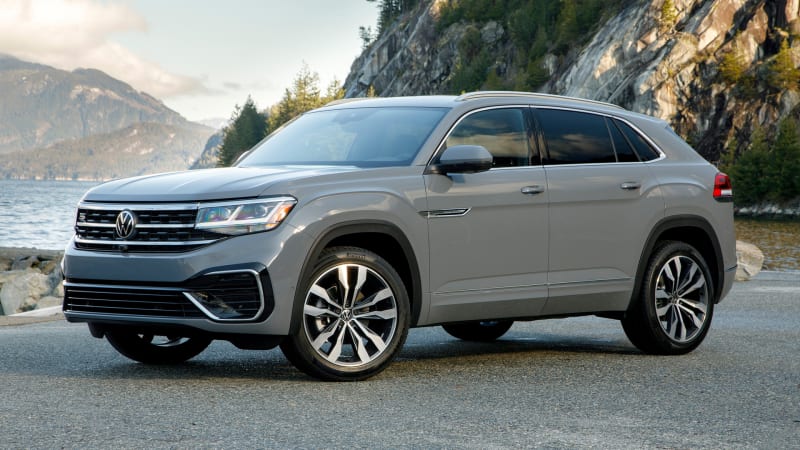 Outside, the Cross Sport gets the new VW emblem, standard LED headlights and a revised front end. The regular Atlas gets similar updates for 2021, but only the Cross Sport can be equipped with an exclusive R-Line package (above right) that adds body-colored sills, a unique rear bumper and a more aggressively designed front bumper that includes gloss black trim.

Thankfully, unlike the many other smaller, coupe-ish SUVs out there, Volkswagen isn't charging you more money for less vehicle. Pricing starts at $31,565 for a front-drive S that comes standard with the 2.0T engine – that's $1,000 cheaper than the three-row model. The V6 doesn't show up until the SE w/Tech trim level where it's an option, bringing the entry point to $37,345. As with every Cross Sport, add $2,000 for AWD. This is where the two Atlases diverge, though, as the three-row's required pairing of V6 and AWD mean the base S can get the six-cylinder starting at $35,765. Again, we're not sure how much that matters.

We're also a little weary of how much offering a two-row version of the Atlas will matter in general. On paper the Cross Sport makes sense, and in person it works, but then we said the exact same thing about the Honda Passport, and that's been selling in shockingly underwhelming numbers compared to the Pilot. Perhaps VW's more style-focused attempt will be more successful than Honda's more outdoorsy adventure one, but it does make us ponder whether offering more SUVs automatically is such a good thing. 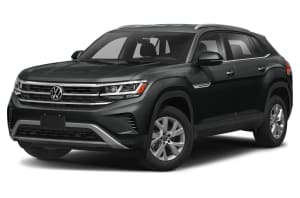