The Rio got a new engine and transmission for 2020, too

The 2020 Kia Rio received an updated engine and transmission for the new year, but it looks like there’s much more on the way for Kia’s subcompact in the near future. We got the all-new Rio in the 2018 model year, but this heavily covered prototype is suggesting significant design changes are on the way.

The new design will complement the updated 1.6-liter four-cylinder and CVT (replacing the six-speed auto) the Rio got this year — fuel economy jumps from 32 mpg combined to 36 mpg combined in both the sedan and hatchback as a result of the switch. The 2020 Hyundai Accent received the same changes. One of our spy shooters managed to catch a hatchback driving around. Unlike many mid-cycle refresh camo getups, this one is more than just a thin layer of swirly stickers. Instead, we get the full-on cladding and tenting job.

From what we can see of the headlights, they already look like a different design. Squared-off LED DRLs are hiding in there, and the element visible beside the LED is shaped differently than the current headlight unit. The fog light visible below the headlight looks to be in the same spot as before, but it’s impossible to tell the design of the surrounding area. With the amount of camouflage seen here, it’s possible that we see an entirely different front fascia design, and the same goes for around back.

Similar to crossovers and SUVs trying to hide their roof and hatch shapes, this one has a big tent over the rear window. We find it highly unlikely that Kia decides to change sheetmetal with this kind of an update, but an entirely new look from the bumper, taillights and garnishing seems possible. The Rio, despite being a solid car in many ways, is a bit boring to look at. Its taillights are barely visible through the black netting, but they look similar to the current car’s lights from what little we can see of them. Most of the car is covered up — even the doors have camouflage on them, though we don’t expect the doors to be going through any revolutionary changes at this point in the car’s life cycle.

We dig the wheels on this tester, and the Rio hatchback’s shape is an appealing one. Sportier styling could help it a bit on the dealer lot, but with the new Soul already out and the Seltos hot on its heels, the Rio is facing a lot of pressure from other Kias. We hope the little subcompact doesn’t go away as other tiny cars have, as our last stint in the driver’s seat was surprisingly charming for such a cheap car. 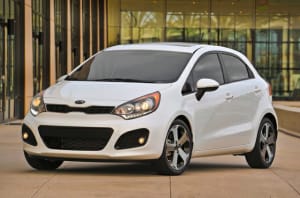