2020 Kia Soul Review | Everything you need to know

Add a Review
The 2020 Kia Soul finds itself at the heart of the growing subcompact crossover segment, offering a compelling blend of space, value and style. It wasn't always that way, however. Now in its third generation, the Soul was once a boxy oddball with few, if any, apples-to-apples competitors. Today, the subcompact crossover segment has effectively been built up around it, yet despite this competition, it remains one of the most characterful and well-rounded choices. A lack of all-wheel drive may be a detriment to some buyers, but it's also no longer alone in that regard.

The Soul is all-new and represents the third-generation model, but it follows the same successful formula as its predecessors. Its trademark proportions have been maintained, and apart from more cargo capacity and a few extra inches in overall length, its dimensions inside and out are consistent. However, its styling has been reworked (note the wraparound LED taillights, the Kia grille that's been grossly enlarged and moved to the lower bumper, and the thin slit of lighting above) and the cabin features a new, more cohesive design that seems to wrap behind the dashboard from door to door (it's very Jaguar).

The 2020 Soul also introduces two new models: the more rugged-ish, crossover-like Soul X-Line, and the sporty GT-Line, which is the only way to get the powerful turbocharged engine upgrade. Importantly, fuel economy has improved across the board, in part thanks to a new CVT transmission. 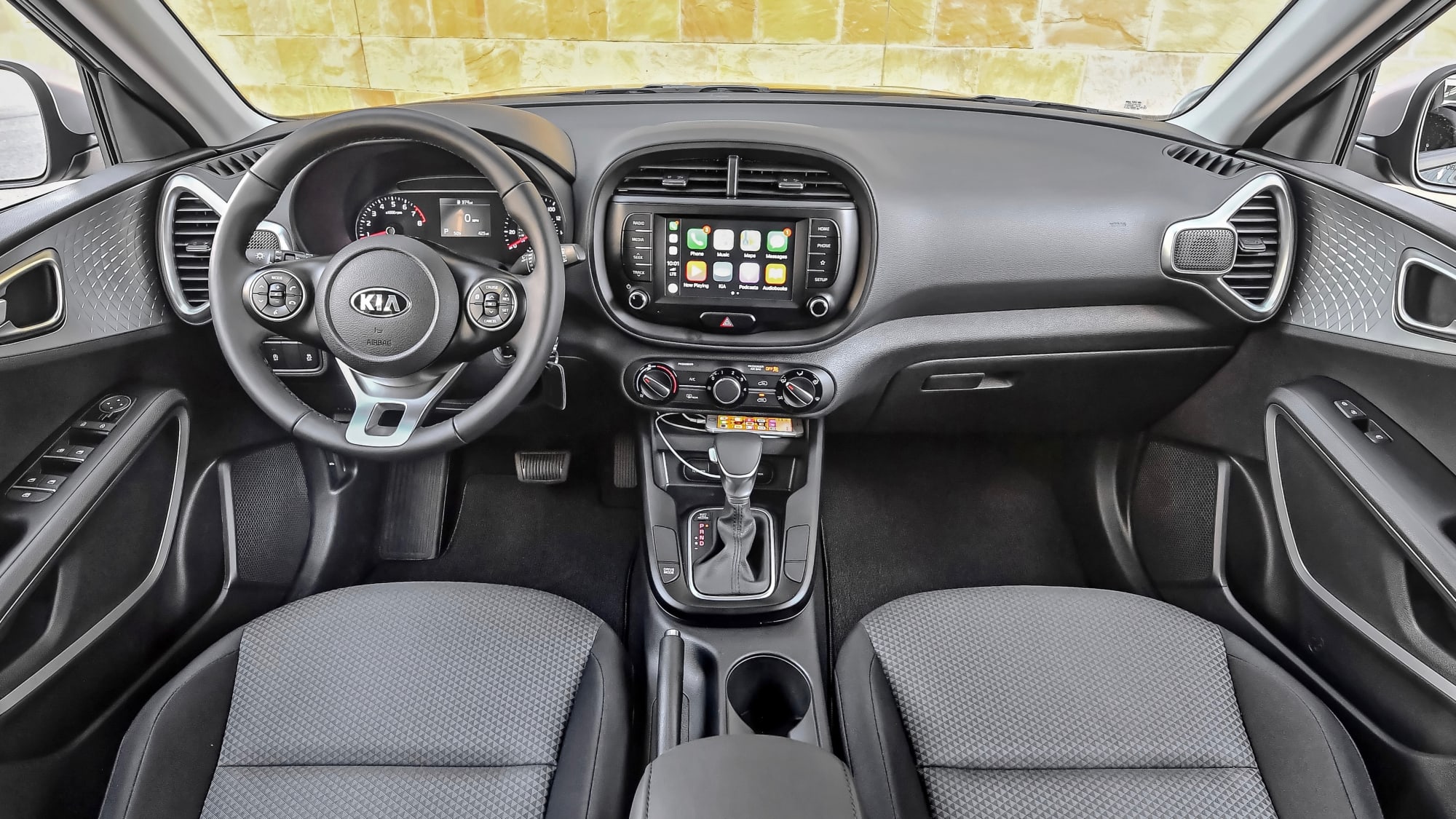 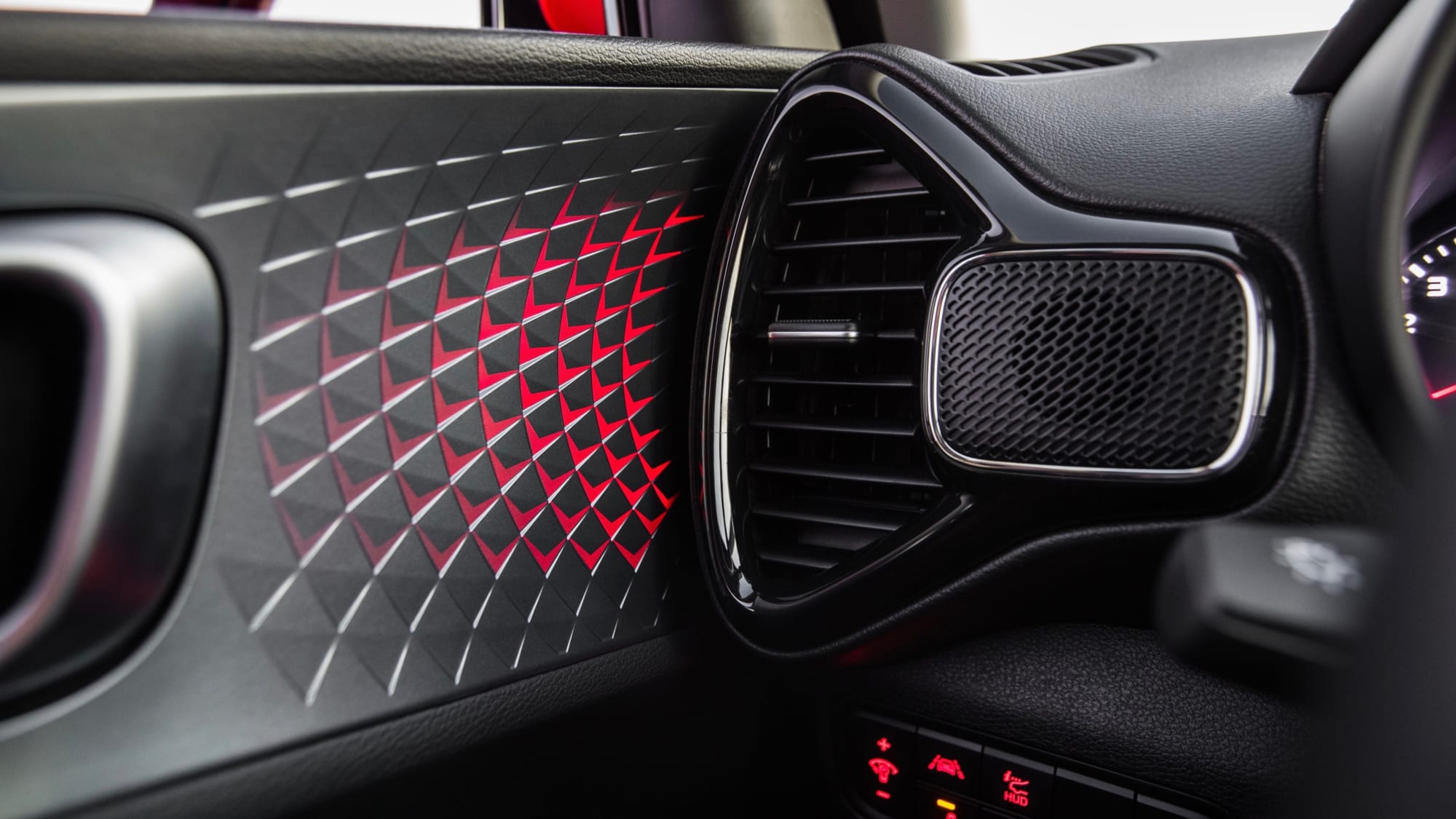 It's a shame that Kia didn't make the interior as fun and characterful as the exterior. It certainly funks things up a bit with triangular patterns in the doors, a squircle-shaped center infotainment pod and tweeters nestled into triangular air vents, but apart from the pricey GT-Line (see the red trim above), it's all rendered in various shades of black or dark grey, effectively hiding them in a colorless, drab interior.

On the other hand, characterful interiors can also be ergonomically challenging (see Mini), and like other Kias, the Soul impresses with simple and easily reached controls — including the standard seven-inch touchscreen. You don't need to be a member of this car's Millenial (or younger) audience to figure the thing out. Apple CarPlay and Android Auto are standard, along with a single USB port (and an extra two arrive along with wireless smartphone charging in the EX and GT-Line 1.6T trim levels). 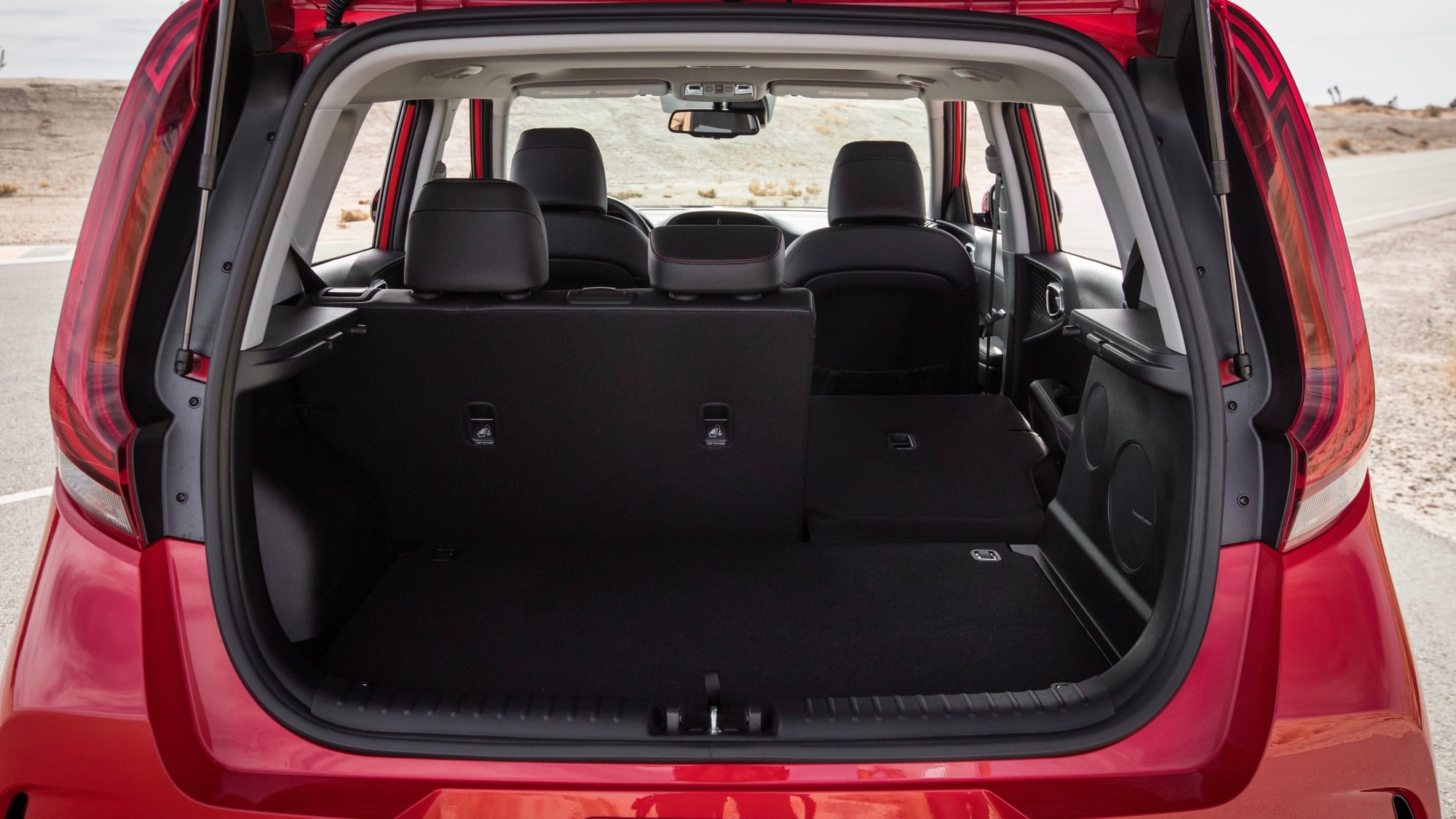 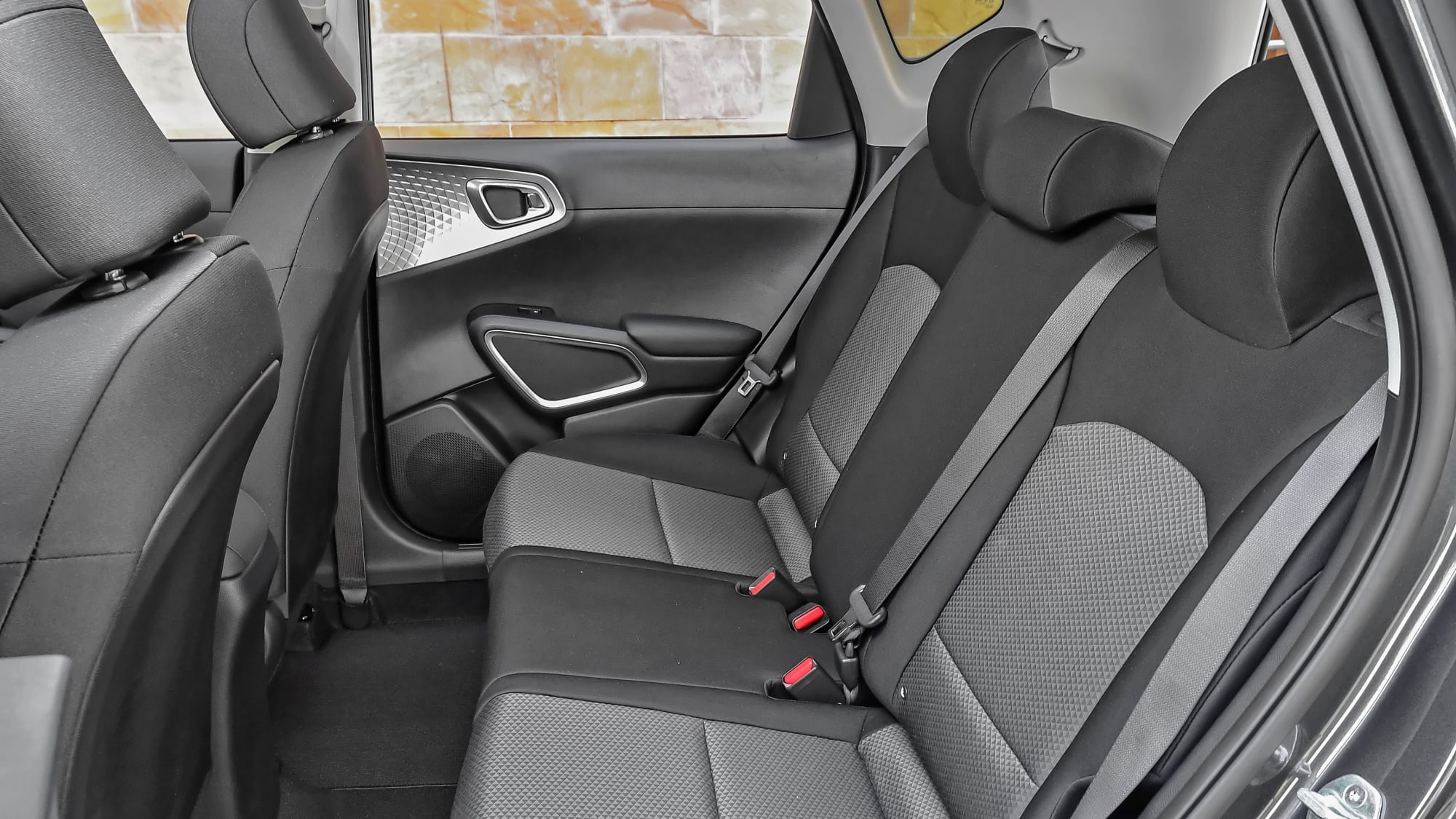 The 2020 Kia Soul has similar dimensions to subcompact crossovers like the Honda HR-V, Nissan Kicks, Jeep Renegade, and especially its mechanically related cousin, the Hyundai Kona. Its tall height and body shape lend it more passenger and cargo room than most, however. Rear seat legroom eclipses most competitors by a considerable margin, making it far more likely to carry four full-sized adults aboard (our 5-foot-10-inch test driver managed to fit behind his seating position).

Cargo volume behind the raised back seat can be among the class best, but achieving its quoted capacity of 24.2 cubic feet requires you to lower the floor panel to a point below the liftover height. You don't have to do that in the cargo-carrying champion Kicks and HR-V, which have comparable cargo capacity on paper. With the floor in its upper position, cargo capacity behind the back seats is a seemingly unremarkable 18.7 cubic feet, but the Soul's boxy shape makes it far more useful than a swoopier vehicle like the Toyota C-HR. With the floor in that upper position, you also get an almost-flat surface with the back seat lowered and one of the biggest maximum capacities in the segment.


All 2020 Soul trim levels come standard with the same 2.0-liter four-cylinder engine that produces 147 horsepower and 132 pound-feet of torque — a modest number but typical for the subcompact crossover segment. A six-speed manual is standard on the base LX, while a continuously variable automatic transmission (CVT) is optional on that trim and standard on all others. Every Soul is front-wheel-drive — all-wheel drive is not available.

Optional on the GT-Line is a 1.6-liter turbocharged four-cylinder that produces 201 hp and 195 lb-ft of torque. That's a whopping amount for this segment, besting even its 175-hp Hyundai Kona cousin. This engine is paired to a seven-speed dual-clutch automated manual.

Fuel economy is 27 mpg city, 33 mpg highway and 30 mpg combined for the base engine with the CVT. Sticking with the manual reduces fuel economy by three mpg combined. By contrast, the turbo engine is nearly as efficient at 27/32/29.

Note that there is also the 2020 Kia Soul Electric. It can travel an EPA-estimated 243 miles on a charge, while going through electricity at a rate of 30 kWh/100 miles. Its output is 201 horsepower and 291 pound-feet of torque, which is a massive improvement over its Soul EV predecessor. 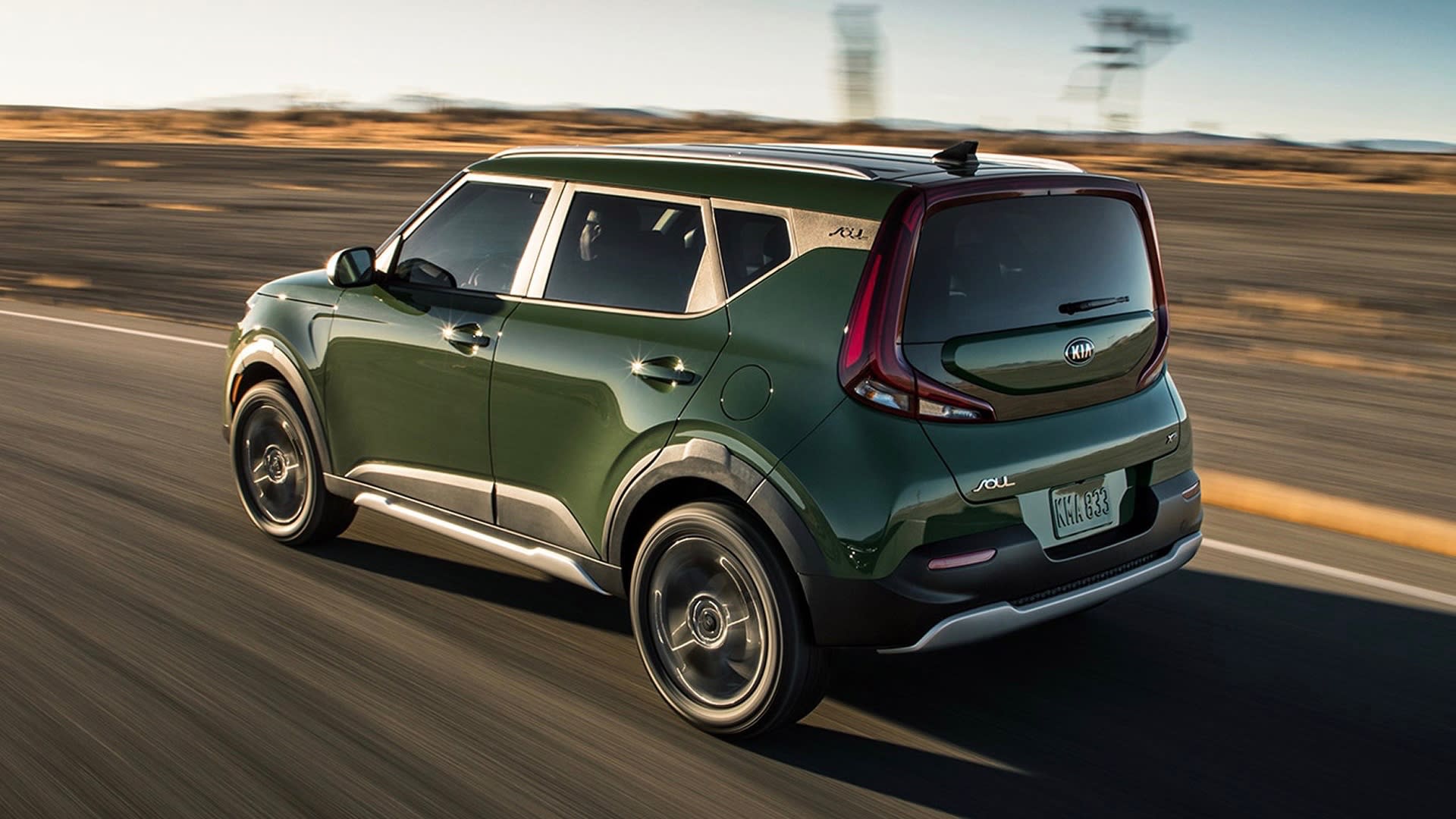 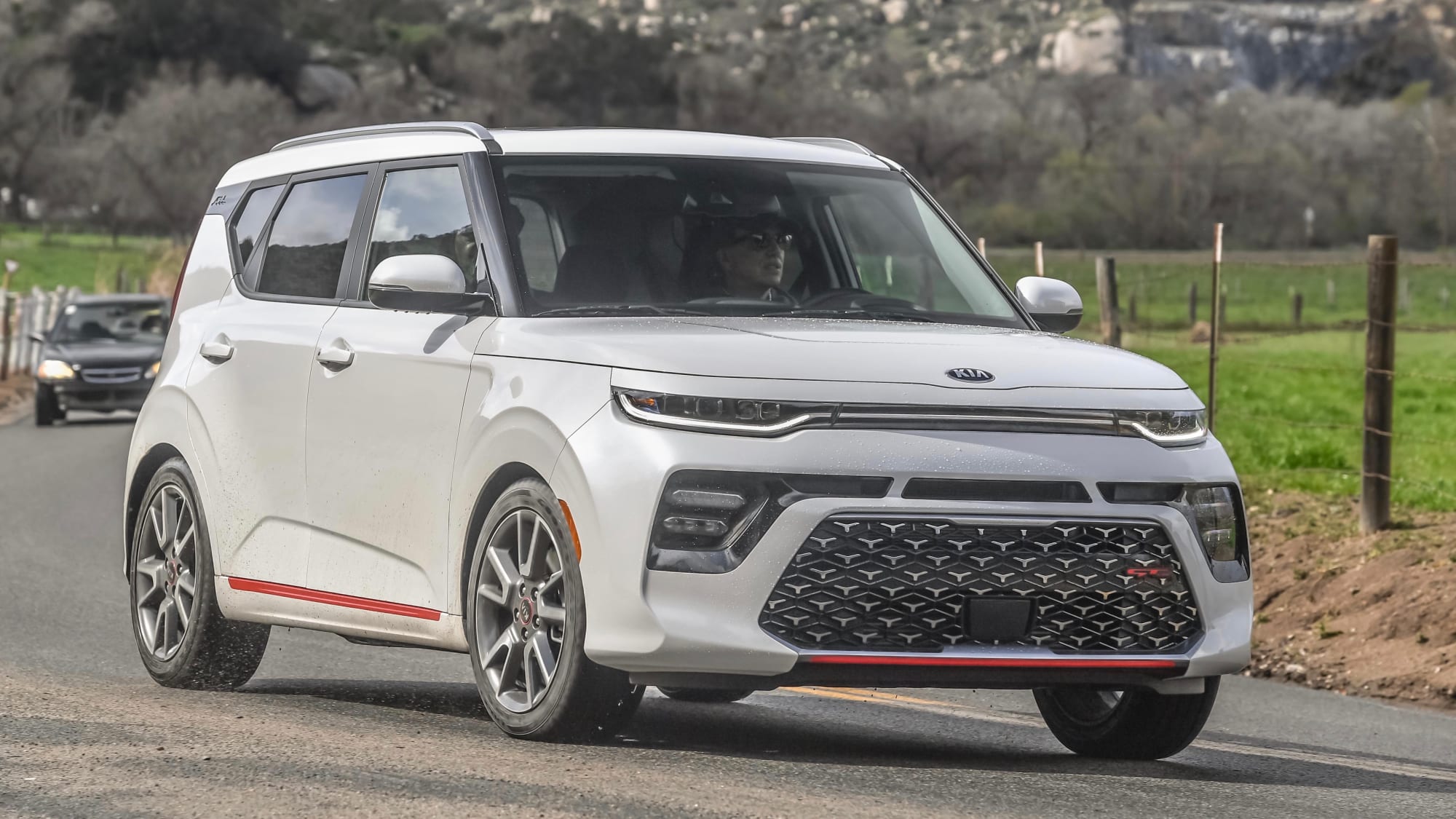 Acceleration with the standard engine is on-par for the segment, which is to say sluggish with plenty of noise. Throttle response is snappy, though, and the sounds it does emit is pleasantly growly. We also like its CVT, which is something we don't often say. It spends most of its time simulating the responses and behavior of a traditional automatic, simulating gears to create a more natural, familiar driving experience while still benefiting from a CVT's efficiency and performance benefits.

On winding roads, the Soul barely leans, and it changes direction quickly and smoothly. The ride, at least with 18-inch wheels, is on the firm side but ultimately well-damped. The main drawbacks are numb, imprecise steering, and a bit of busyness over choppy pavement.

As for the GT-Line, its turbocharged engine not only blows the doors off its competitors in terms of output, but the engine itself is smooth and demonstrates strong mid-range torque around town. There is a bit of torque steer, however, when mashing the throttle. As for its handling, Kia says the GT-Line gets a sport-tuned suspension, but we didn't notice much of a difference in the way it rode or handled. That's not necessarily as bad thing.

Our first drive impressions of the 2020 Soul, including the X-Line and GT-Line 1.6T trim levels. We discuss its interior and what it's like to drive. 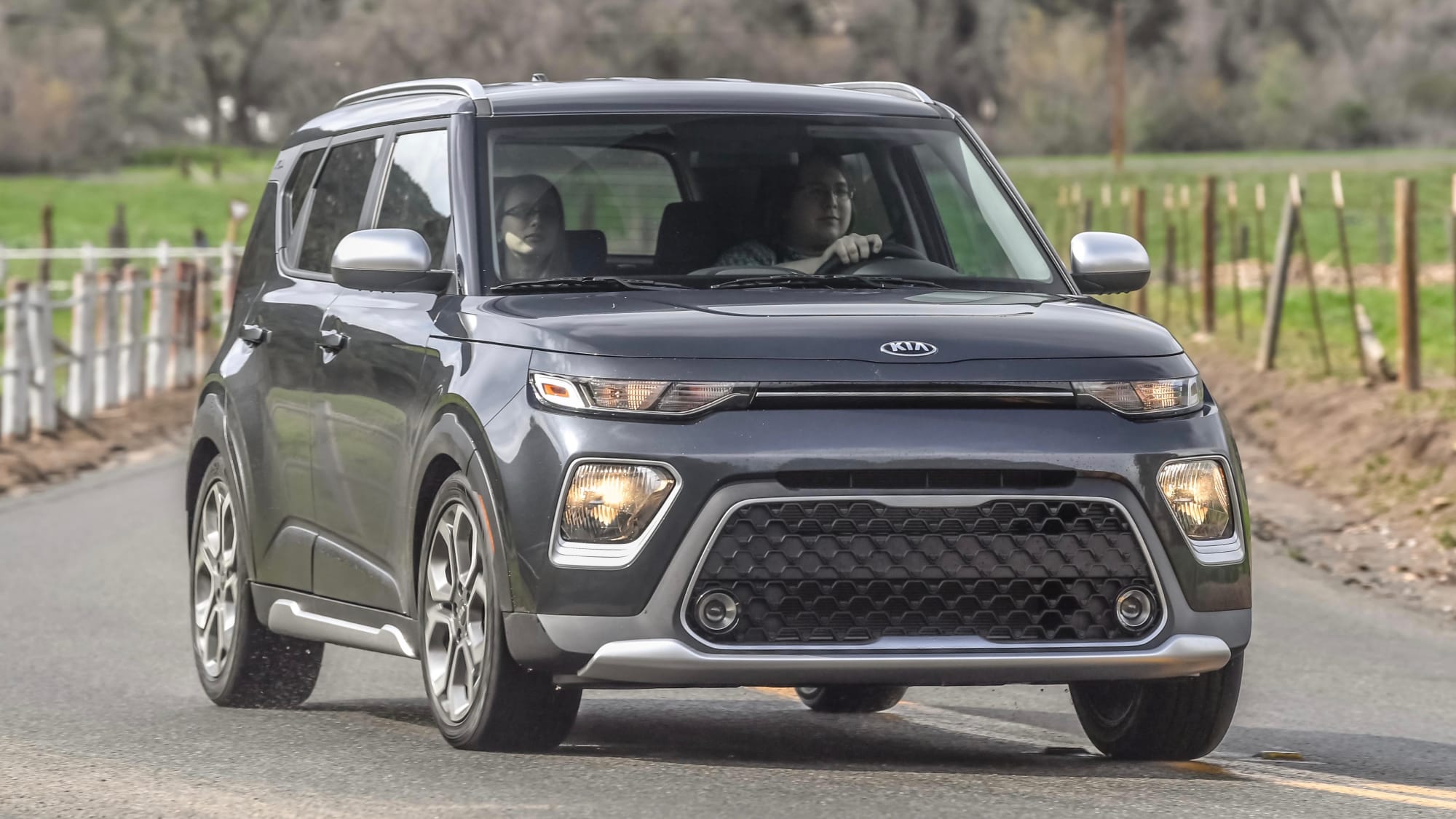 Kia Soul vs subcompact crossovers: How they compare on paper 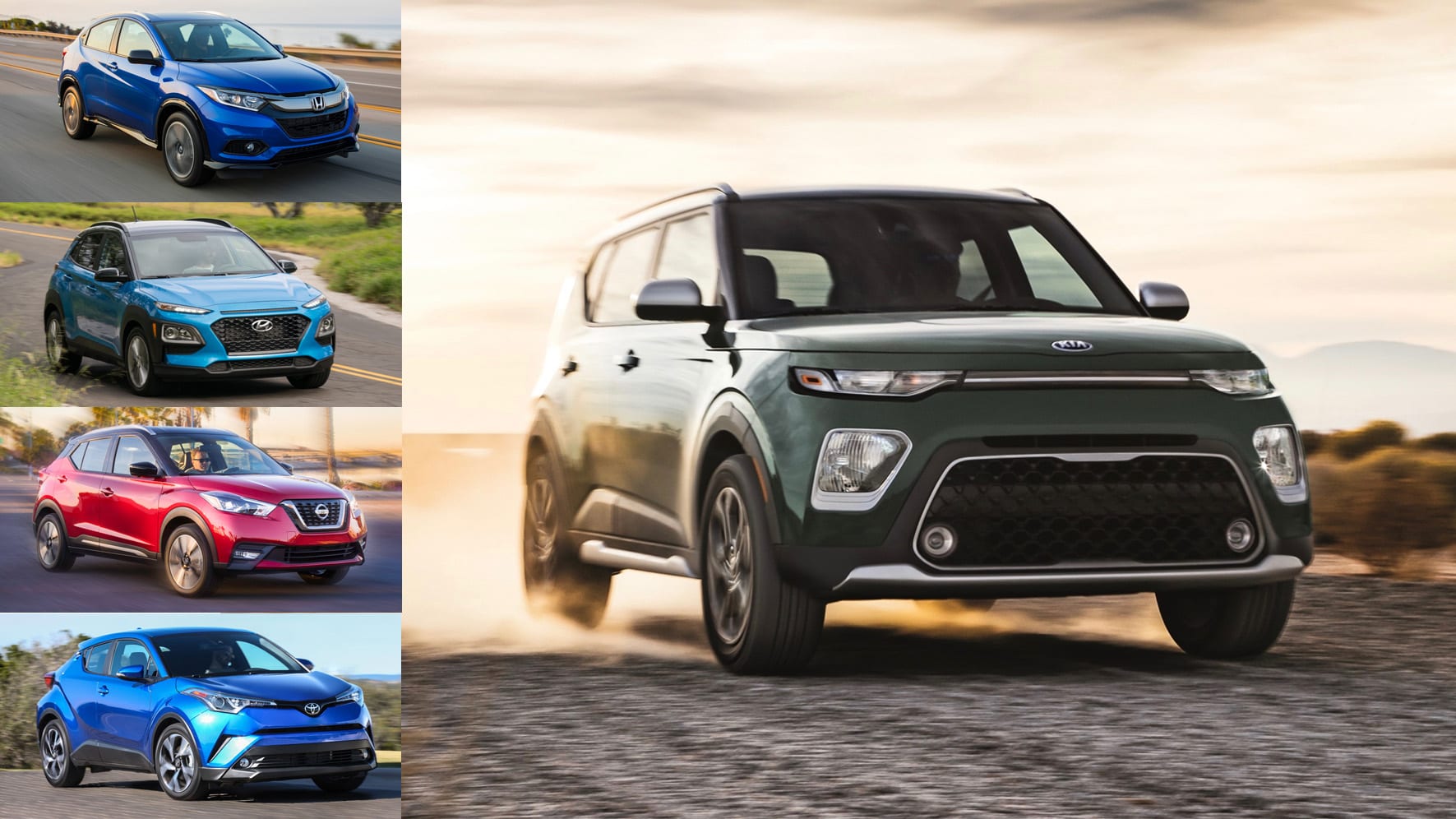 Details about its official electric range estimates, as well as how it compares to other EVs like the Kia Niro EV, Hyundai Kona Electric and Nissan Leaf E+. 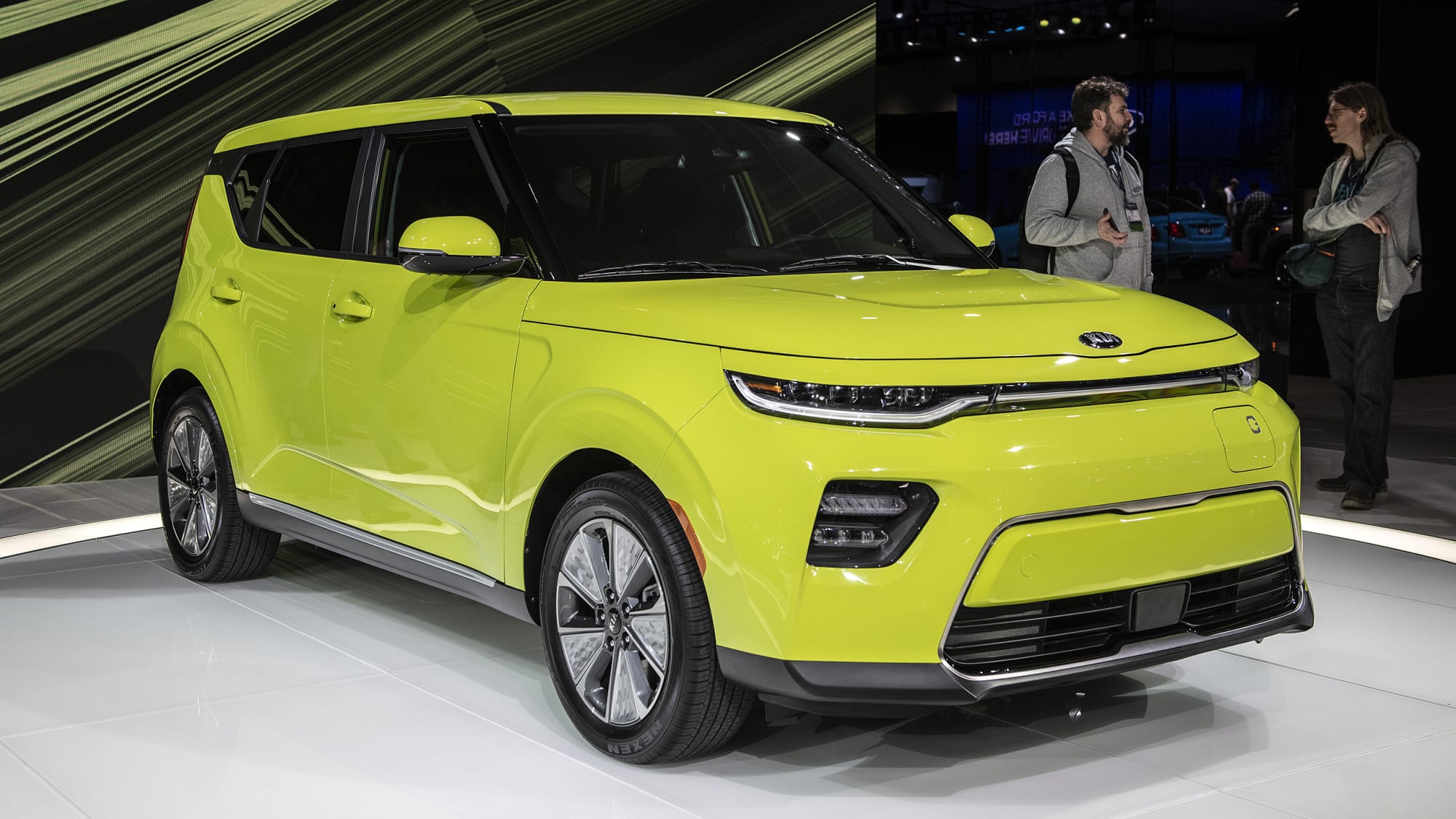 Pricing for the Soul Electric had not been announced at the time of this writing.

Besides the usual airbags and stability systems, the Soul comes standard with a comprehensive amount of accident avoidance tech starting with the S trim level. These include forward collision warning, automatic emergency braking, lane-keeping assist, blind-spot and rear cross-traffic warning, and driver inattention warning. Note that the X-Line only has the blind-spot systems, while the GT-Line 1.6T adds pedestrian detection for the forward collision warning system.

The Soul had not been crash tested by a third party at the time of this writing. 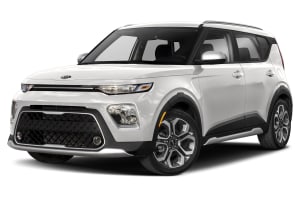 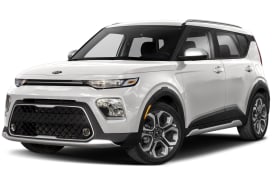 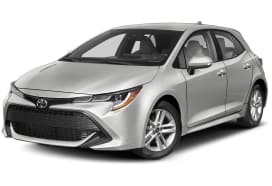 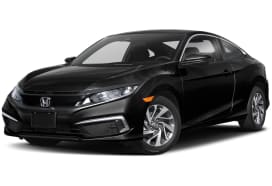 $1,640 - $2,063 Nat'l avg. savings off MSRP
See Local Pricing
I'm not in the market for a vehicle at this time. Please move this suggestion to the side for 30 days.
Huge Savings