Better fuel economy could also come from a reduction in horsepower Based on new fuel economy ratings on the EPA site, Hyundai will increase the spread of continuously variable transmissions in its 2020 lineup. The brand's entry-level Accent is listed at FuelEconomy.gov with either a six-speed manual as the standard choice or an optional CVT. The CVT appears to replace the traditional six-speed automatic available until last year. The Hyundai Elantra and Kia Forte also switched to the fuel-saving transmission for 2020, said chain-drive gearbox specifically developed for the South Korean automaker's Gamma and Nu four-cylinder engines.

Furthermore, based on updated fuel economy ratings for the Accent with the six-speed manual, Hyundai might have reduced the subcompact's horsepower. The current model produces 130 horsepower and 119 pound-feet of torque. The new Venue crossover, based on the Accent, gets 121 hp and 113 lb-ft — and also comes with a CVT. If the 2020 Accent adopts the Venue's numbers, this wouldn't be the first time the Accent slid down the power scale. Hyundai introduced the 2011 model with 138 hp and 123 lb-ft, switching to the current rating with new model in 2018.

The money-saving changes will create a little more time to smell the roses, though. We called the CVT "fairly good" in our first drive of the Forte, and said it has a setting that can minimize droning in the Venue. But the 1.6-liter remains "raucous" in the Venue, the engine-transmission combo in the Forte being hesitant, "weak," and "not pleasant" when on the power. 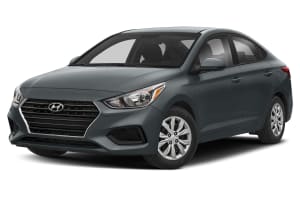