Rumors claim General Motors will resurrect the Hummer name on an electric pickup truck by 2022, and GM allegedly will preview the model with an ad starring basketball star LeBron James during the 2020 Super Bowl. If accurate, the move would represent a stunning 180-degree turn for a nameplate long associated with war-like gas-guzzlers. It wouldn't be the first time the automaker has tried to cast Hummer in a greener light, however.

In 2004, when mass electrification looked as realistic as George Jetson's flying car, Hummer collaborated with Quantum Technologies to build a one-off H2 SUT named H2H powered by hydrogen. Engineers modified the stock H2's 6.0-liter V8 to run on compressed hydrogen stored in three carbon fiber tanks, and added a supercharger to offset the loss of power. The eight-cylinder made 180 horsepower, compared to 325 horsepower in the gasoline-powered model, and the truck's 12-pound hydrogen storage capacity gave it a 60-mile range.

"The H2H was created for two purposes. It brings focus and attention to the journey to a hydrogen economy, and it will provide GM with key learnings on hydrogen storage, hydrogen delivery systems, and hydrogen refueling infrastructure development," explained Elizabeth Lowery, the company's then-vice president of environment and energy. She emphasized the H2H's experimental vocation and said there were no plans to bring it to production.

Actor, then-California governor, and devout Hummer fan Arnold Schwarzenegger celebrated the H2H as a vision of the future after taking it for a spin. It didn't have much of a future, as it turns out, and it remained a prototype.

Fast-forward to 2009, less than a year before Hummer shut down after the Chinese government vetoed a proposed sale to Sichuan Tengzhong Heavy Industrial Machinery Company. General Motors teetered on the brink of bankruptcy, it had much bigger worries than Hummer's fuel economy, so the task of making a greener truck fell into the lap of suppliers. FEV and Raser joined forces to build a plug-in hybrid prototype based on the H3. Its powertrain was built around a turbocharged, 2.0-liter EcoTec engine related to the unit found in the Chevrolet HHR SS and the Pontiac Solstice GXP, among other cars. In this application, it powered a 100-kilowatt generator that zapped a 268-horsepower electric motor into motion. Output traveled through the H3's stock four-speed automatic transmission and four-wheel-drive system, including the transfer case. 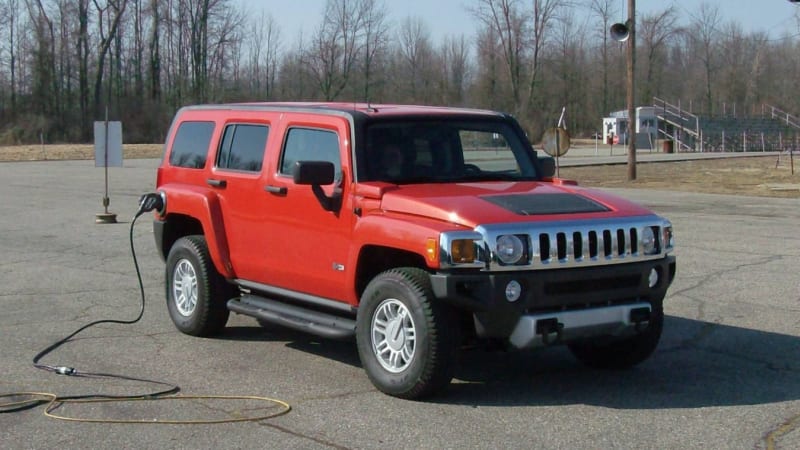 Its builders quoted a 40-mile electric range, over 100 mpg in mixed driving, and a hefty 5,720-pound weight. To add context, the Environmental Protection Agency (EPA) rated the standard H3 at 15 mpg in a combined cycle. FEV and Raser bragged the plug-in Hummer could double as a mobile power source, a feature most of the manufacturers racing to enter the electric off-roader segment in the early 2020s have talked about.

Here again, the eco-friendly H3 was a demonstrator, a rolling laboratory of what could be. There were no concrete plans to bring it to production, though the Chevrolet Volt and the Fisker Karma used similar technology. There is no evidence suggesting Hummer considered licensing the powertrain, but it tried boosting the SUV's green credentials by making the 5.3-liter V8 ethanol-compatible for the 2010 model year.

Other companies electrified the H1 for more specific use cases. In 2010, Nation-E made an electric H1 as a disaster-response vehicle, and Zero South rebuilt the model with snow tracks and a diesel-electric powertrain for an expedition to the South Pole. Schwarzenegger asked Germany-based Kreisel to build an electric H1 for his personal use in 2017, and he later commissioned a battery-powered Mercedes-Benz G-Class from the company. The irony of electrifying a Hummer has fueled more than a few one-off projects over time.

On a broader scale, Raser tried buying Hummer from General Motors in order to build it up as an eco-friendly off-road brand, a move that showed remarkable foresight, but executives shot down its repeated offers because they were running out of time to save the brand. Ultimately, looming competition from newcomers like Rivian was the catalyst General Motors needed to make a green Hummer a reality. We'll have a better idea of what's next -- assuming the reports are accurate -- during the Super Bowl, which is scheduled to air on February 2.