Someone managed to get the big blower engine into the car, but didn't quite finish the wiring. Like the Corvair, the Vega, and the Citation, the Pontiac Fiero was a very innovative machine that ended up causing General Motors more headaches than happiness, and Fiero aficionados and naysayers continue to beat each other with tire irons (figuratively speaking, I hope) to this day. The General has often proved willing to take the occasional big gamble and huge GM successes in engineering prowess (including the first overhead-valve V8 engine for the masses and the first real-world-usable true automatic transmission) and marketing brilliance (e.g., the Pontiac GTO and related John DeLorean home runs) meant that the idea of a mid-engined sporty economy car (or economical sports car) got a shot from the suits on the 14th floor. Sadly, the Fiero ended up being the marketplace victim of too many issues to get into here, and The General pulled the plug immediately after the 1988-model-year suspension redesign that made the Fiero the sports car it should have been all along.

But what if the plastic Pontiac had never suffered from the misery of the gnashy, pokey Iron Duke engine and had been built from the start with a screaming supercharged V6 making way better than 200 horsepower? The final owner of today's Junkyard Gem sought to make that very Fiero, by dropping in one of the many supercharged 3.8-liter V6s installed in 1990s and 2000s GM factory hot rods. 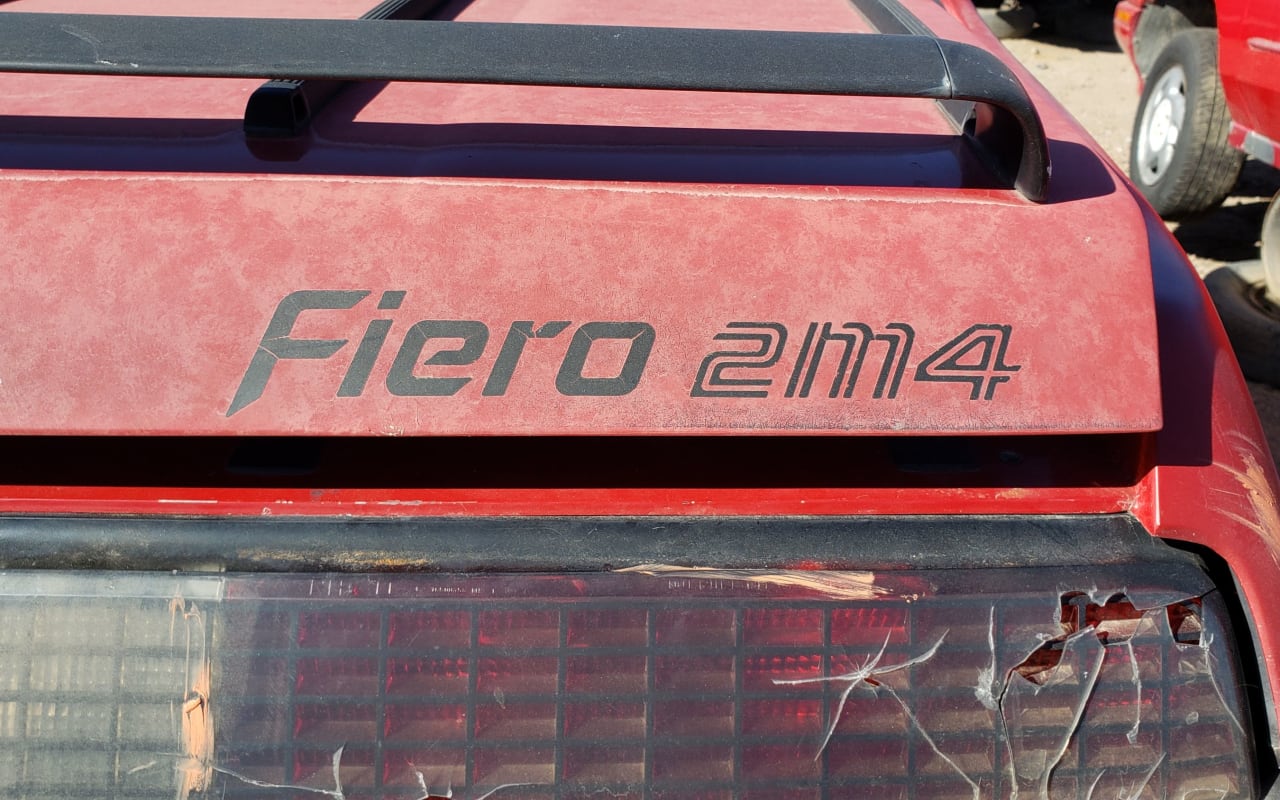 The first Fieros came out in 1983 for model year 1984, and the only engine available that year was the Iron Duke 2.5-liter four-cylinder, which generated its 92 horsepower with the full-throated song of a Soviet tractor stuck in the freezing mud of a Polish sugar-beet field. The 2M4 badging stood for "two seats, mid-engine, four cylinders," just as the numbers in the Oldsmobile 4-4-2 once represented "four carburetor barrels, four-speed manual transmission, dual exhaust." 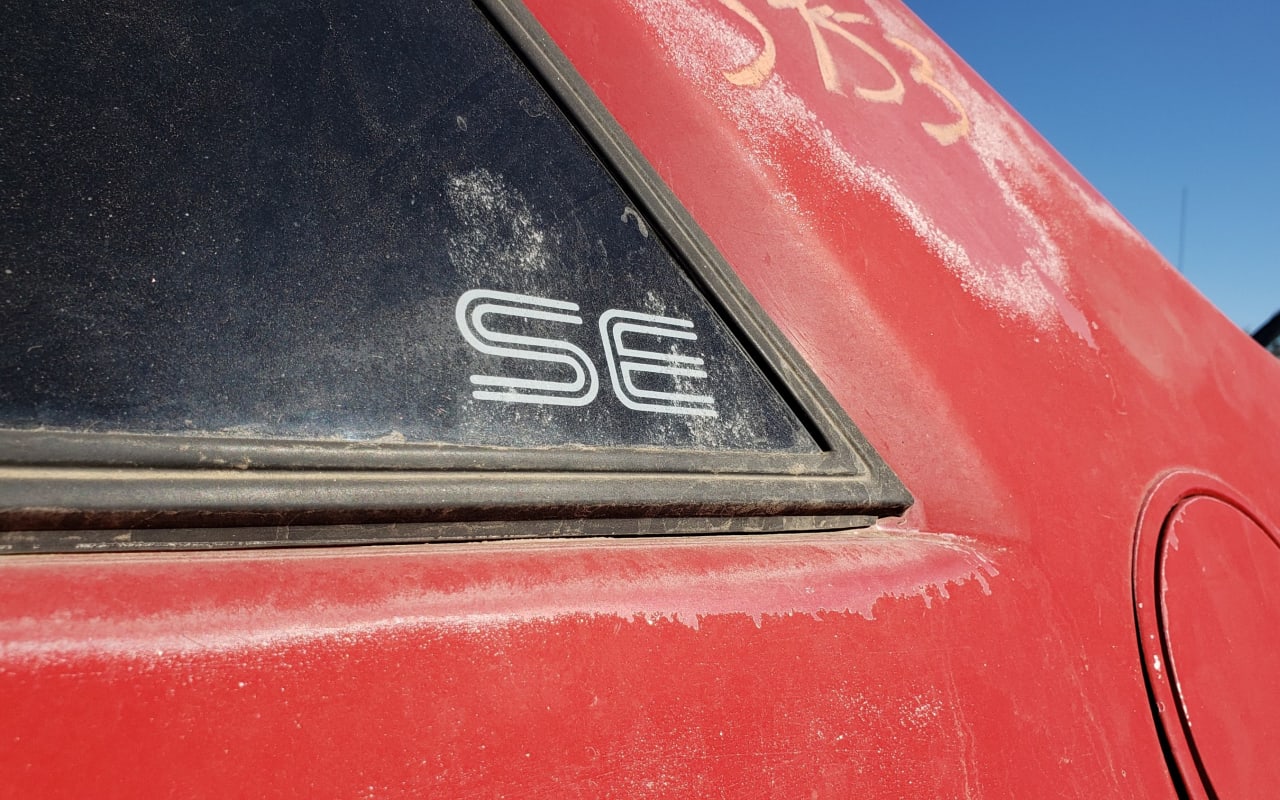 This car is a top-trim-level SE model, which listed for $9,599 (about $24,200 today). The no-frills Fiero cost just $7,999 that year, making these cars far cheaper than the only other reasonably affordable new mid-engined car Americans could buy at that time: the $13,990 Bertone (aka Fiat) X1/9. The Toyota MR2 appeared in North America as a 1985 model with a base price of $10,999 and promptly siphoned off the car-buying cash from a bunch of potential Fiero shoppers. (Competition from affordable front-wheel-drive two-seaters such as the Honda CRX and Ford EXP didn't help matters for Pontiac, despite the Fiero's prominent placement in the hugely successful "Big Bam Boom" tour of Hall & Oates.) 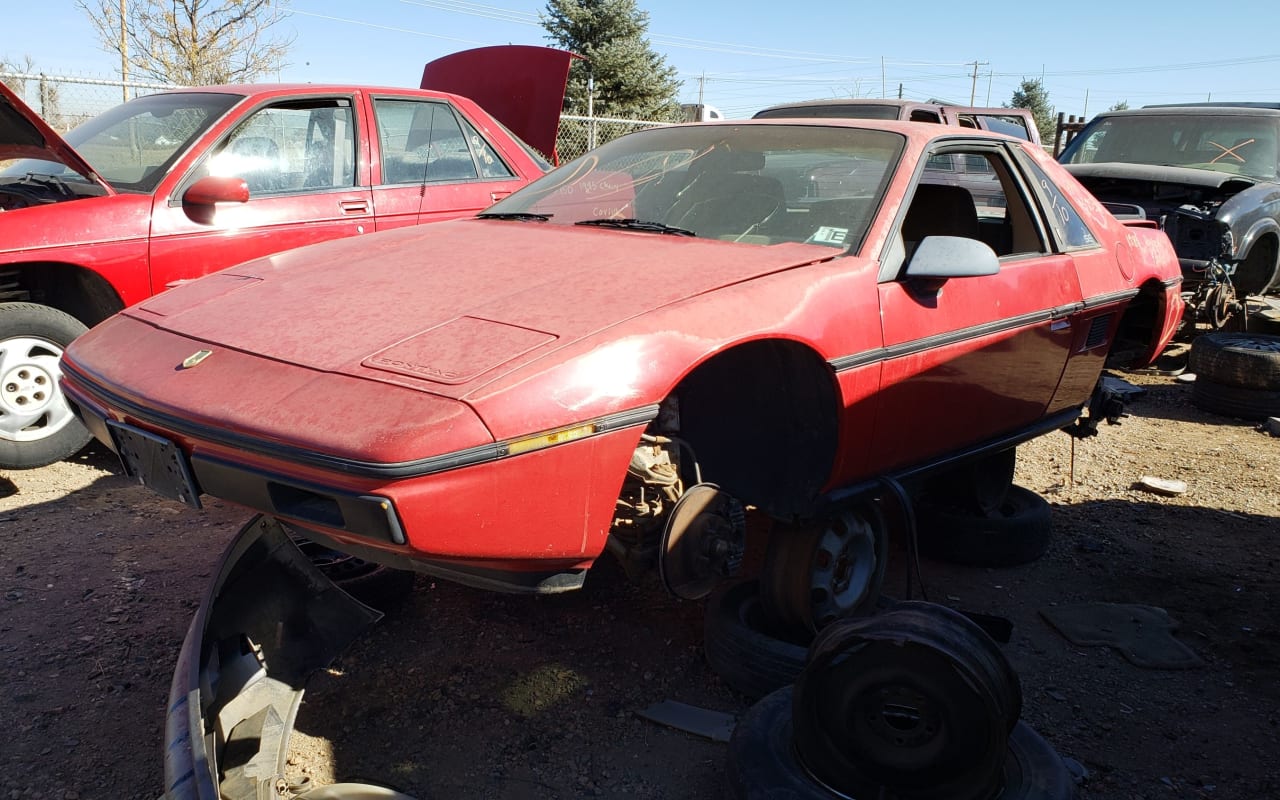 I was in my senior year of high school in 1983-1984 (driving the world's sketchiest '58 VW Beetle, a basket-case '67 Pontiac GTO, and a staggeringly frumpy Toyota Corona sedan, all of which were purchased for a combined $213, which comes to $538 after 35 years of inflation), and I recall having just about zero interest in the Fiero at the time. The combination of Chevette front suspension, Citation rear suspension, and Soviet tractor engine turned me off (what I really wanted around that time was a new Mitsubishi Starion, even after the Fiero got an optional 2.8-liter V6 and became— in the eyes of Pontiac's marketers— college-student cool). Anyway, the idea of any new car to take to college was as far out of my financial reach as a working ICBM-defense system was to Ronald Reagan that year, and I ended up ditching the three dangerous hoopties for a reasonably well-sorted Competition Orange '68 Mercury Cyclone with a 351 Windsor engine swap. 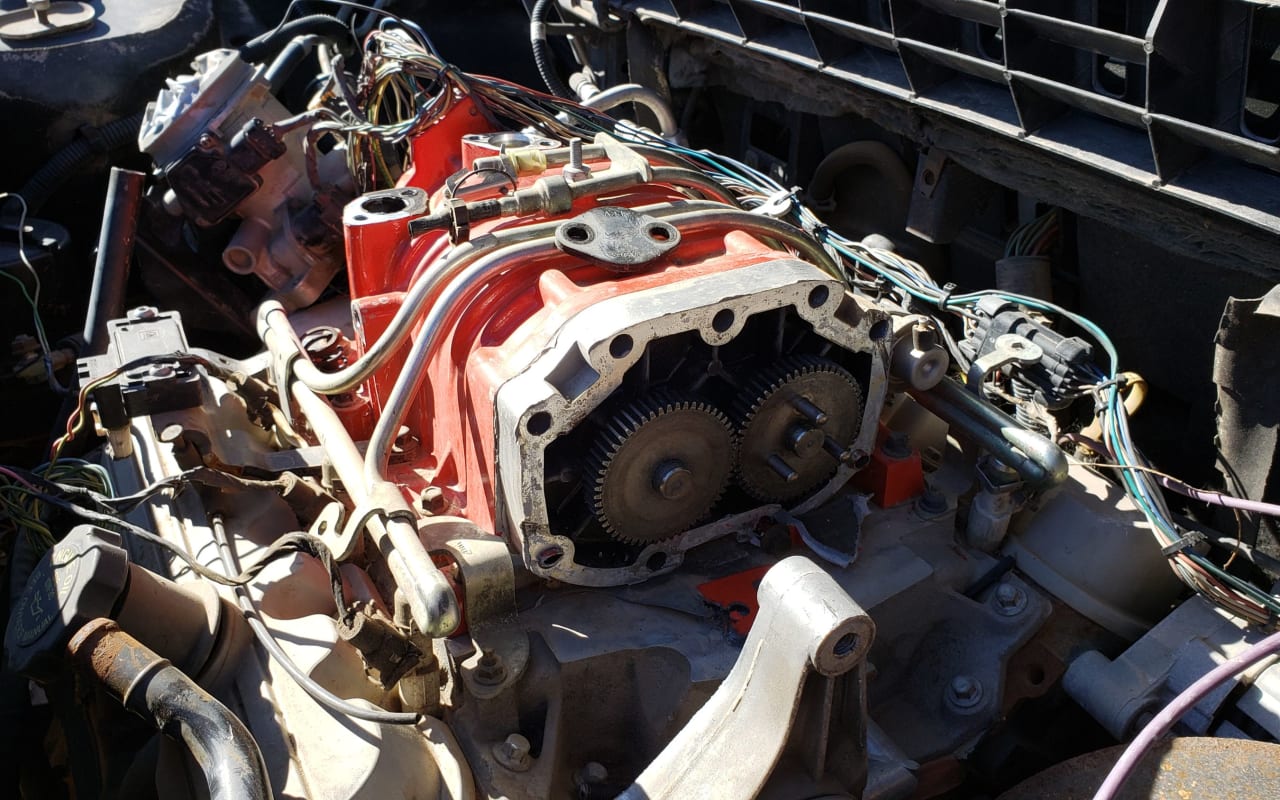 Still, and perhaps in part because I didn't destroy all of my early-1980s teenage car ideals by actually owning a real-world Starion, I retain a great deal of affection for the Fiero, so much so that I try to photograph discarded examples when I find them during my junkyard peregrinations. In fact, I used my influence as the wise and fair Chief Justice of the 24 Hours of Lemons Supreme Court to help get the much-sought-after 2019 Coppa di Bondo season-championship award into the hands of a team that runs two Fieros in the series. When I saw this fairly intact '84 in a Colorado yard a bit south of Cheyenne, I headed right to it with my camera ready. When I went to shoot the Iron Duke in the engine compartment, imagine my surprise when I saw this Eaton M62 blower, sitting atop a 3800 V6. 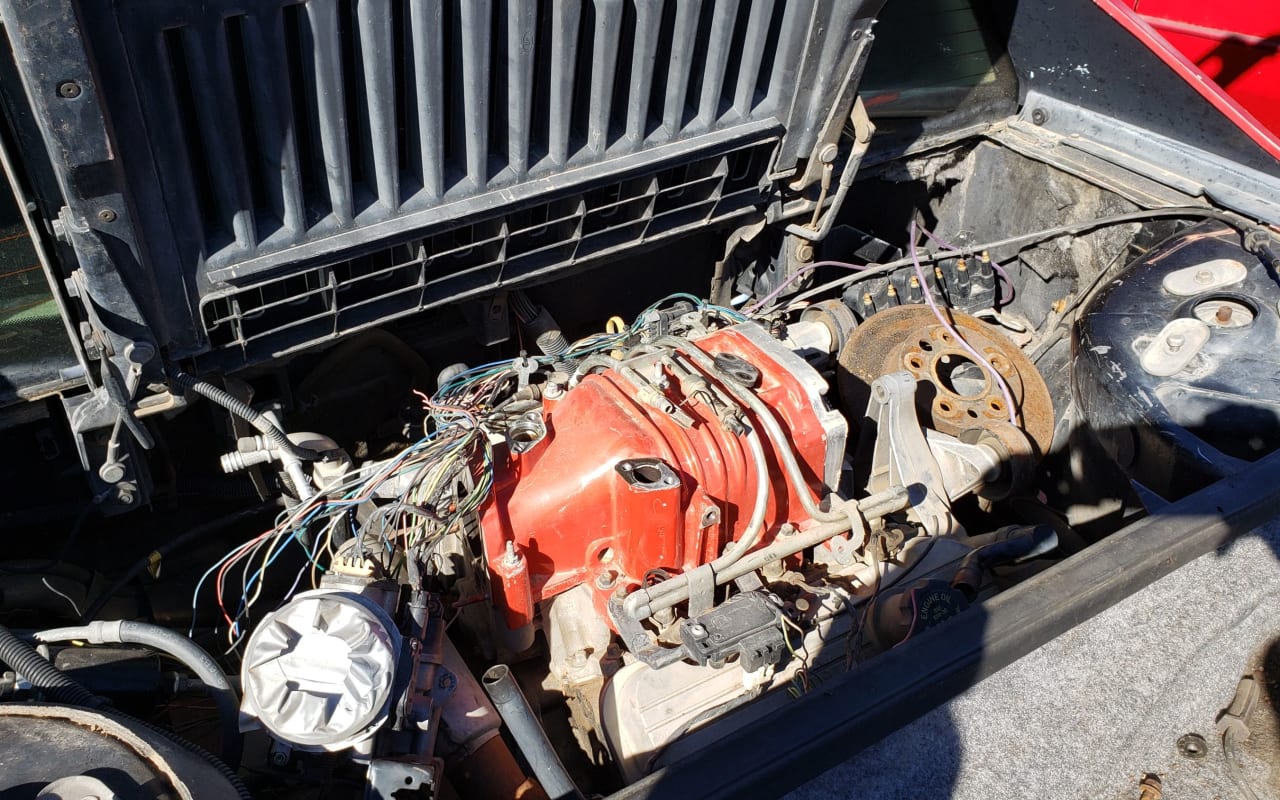 Even though GM never put any member of the 90-degree Buick V6 family (itself descended from the engine that evolved into the Rover V8) into a production Fiero, plenty of engine-swappers have taken advantage of the cheapness of both project-grade Fieros and junkyard supercharged Buick V6s to make this combination a reality. While the 3800 takes up more room than the 60° V6 that went into many 1985-1988 Fieros, it's still a pretty compact engine (and Fiero swappers manage to get V8s into these cars without too much difficulty, too). 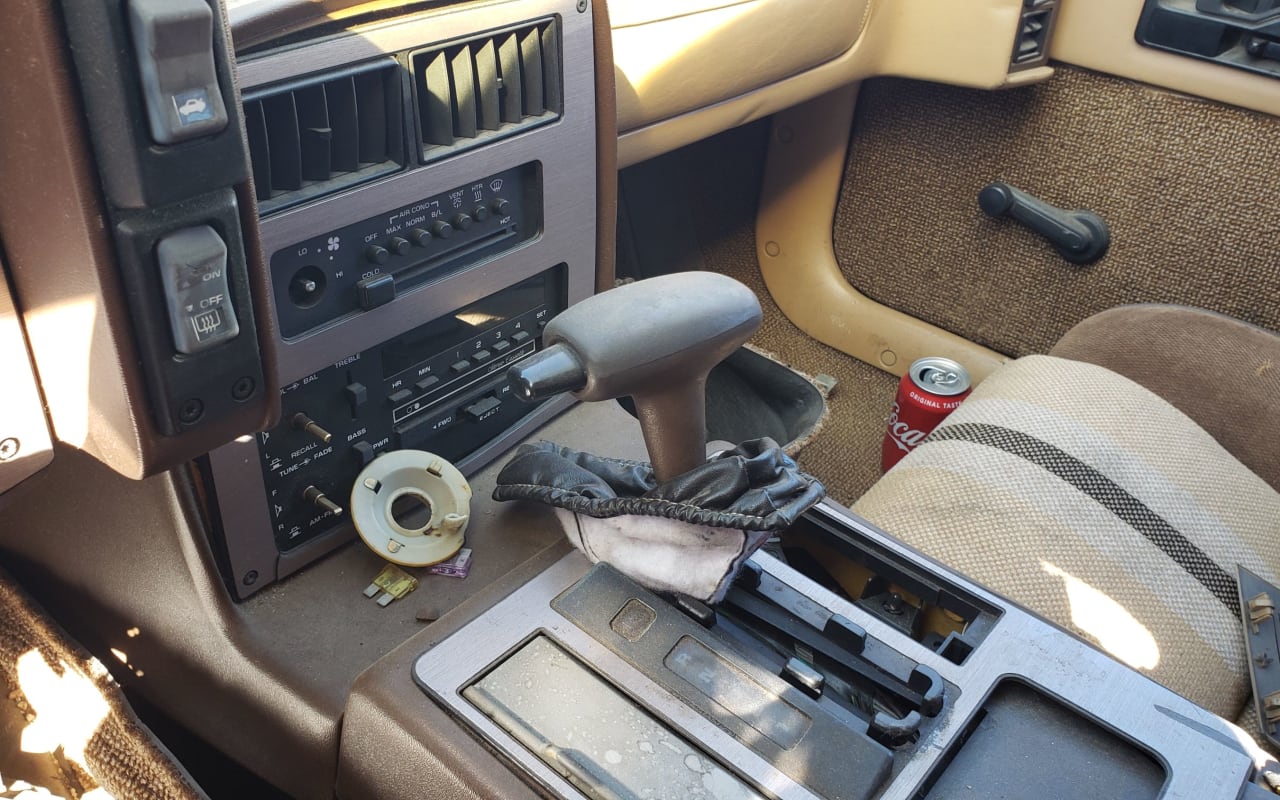 I'm not sure how far along this car's last owner got with the swap, but I must assume that a manual transmission was an important part of the long-term plan. Yes, the original purchaser of this car opted for a slushbox to manage all 92 of those Iron Duke horses. 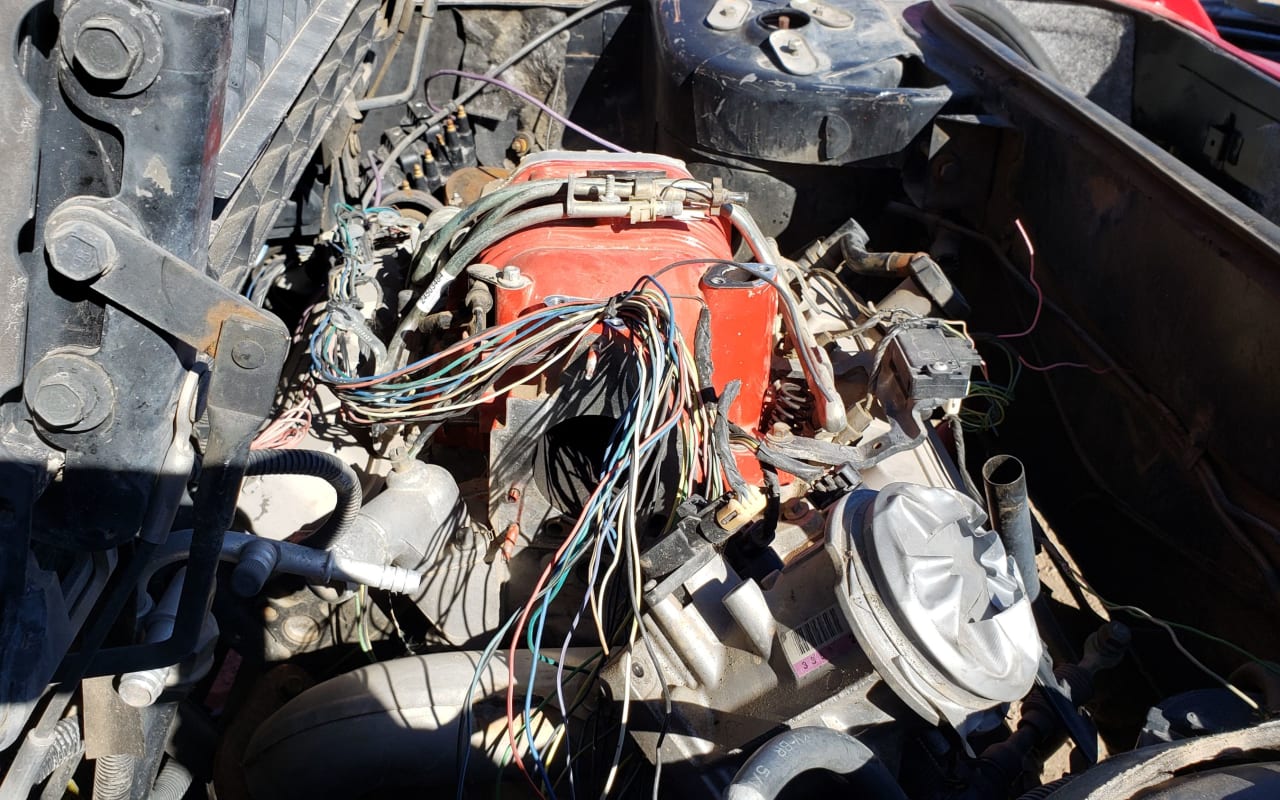 The blower has been partly disassembled, though I can't tell whether that happened before or after the engine went into the car. I can see from this cut-up wiring harness that the wiring ended up being the tallest stumbling block with this project. Wiring a car is tough, as I know all too well, and getting a modern computerized engine to work in a car that started life with a completely unrelated carbureted engine… well, we get in over our heads in a hurry with this stuff. Maybe an angry landlord or spouse demanded the removal of a non-running car, and that phone call to the local U-Wrench yard happened soon after.

You'll see so much optimism in the early Fiero advertising.