New models packed with cutting-edge tech are on the menu

MODENA, Italy – Driving Maserati's raucous GranTurismo MC and the effortlessly quick Levante SQ4 back to back feels like traveling through time. Horsepower doesn't go out of style, but a user interface quickly does, and the GranTurismo looks like it's from another era in that respect. Designers, engineers, and executives are busily orchestrating a transformation that will ensure the 105-year old firm's next leap forward is even more dramatic. Autoblog went behind the scenes in Maserati's Innovation Lab – which has never been opened to outsiders before – to find out how the looming metamorphosis will shape Fiat-Chrysler Automobiles' (FCA) flagship brand.

Maserati is on the brink of a ground-up redesign that will take it into new segments of the market, and diversify its powertrain palette. We heard the term electrification used on many occasions during our visit, though company officials resorted to automotive omertà when we asked for additional details. An earlier product plan reveals every upcoming addition to its line-up will be available with an electric powertrain, and there will be quite a few cars to electrify. Historically a small, almost niche automaker, Maserati is on track to release five new models between 2020 and 2023, including a second SUV positioned below the aforementioned Levante, plus replacements for most of its current cars.

Technology is playing a significant role in Maserati's renaissance. The company's four-year-old Innovation Lab is home to simulators capable of reproducing six months' worth of wear and tear in two weeks. Engineers can dial in a variety of situations, locations, and road conditions, ranging from a winding country road in France to a busy highway in southern California. They can digitally insert potholes, add rain or fog at the push of a button and remove either just as quickly, and put virtual prototypes on a long list of race tracks around the world, including the Nürburgring. Digital wind tunnels help the team test future cars well before they're built. This approach saves time and money, explained Luca Dusini, the man responsible for Maserati's vehicle dynamics testing and simulation.

Making every dollar and each minute count is key to pulling off such an ambitious overhaul. 90% of development work is carried out on the various simulators, according to Dusini. This is significant, because Maserati is developing most of the technology it will pack into its future models from scratch. It doesn't have a first-generation electric powertrain to build on, for example. 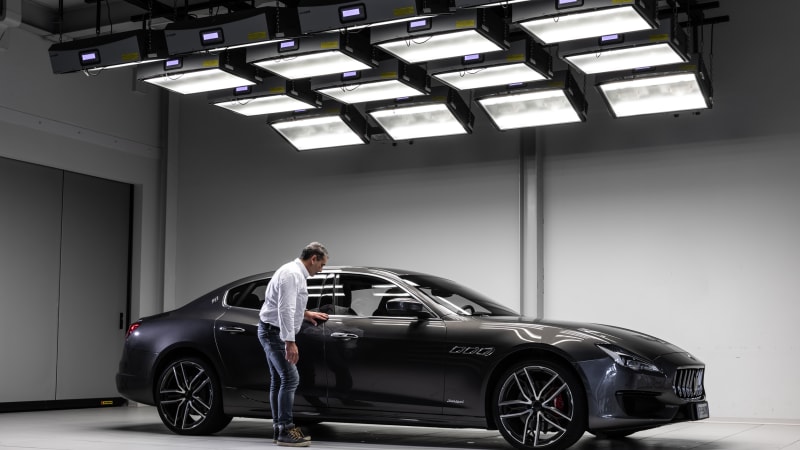 There's no replacement for real-world testing, however. Joe Grace, the head of Maserati's product development team, revealed the company normally puts about three million miles on test mules each year, and that's not about to change. They're driven north of the Arctic circle for testing in cold weather, in the Middle East to check how they withstand heat, and in more remote countries like New Zealand and Brazil to escape the prying eyes of spy photographers looking for the next big scoop.

This technology-first approach to design inevitably permeates the department developing interiors. Engineers create virtual mannequins to learn how humans of different shapes and sizes will interact with every part of a car's cabin, ranging from the power window switches to the touchscreen that displays the infotainment system. Maserati needs to embrace technology, Grace called an over-the-air updating system mandatory, but the firm is proud of its past, and it's not about to erase it. It will notably honor its heritage by carefully selecting the materials it uses to build its future interiors.

We'll need to wait until the next Geneva Auto Show in March of 2020 to get a clearer idea of how Maserati's revamped design process shapes a car. That's when the company's next new model, a mysterious sports car we've only seen spy shots of so far, is scheduled to break cover. It will be built in the Modena, Italy, factory that manufactured the GranTurismo and the GranCabrio until November 2019, but it won't be positioned as the duo's replacement. It will be a new addition to the range, one without a direct predecessor. While full details remain under wraps, Autoblog understands the yet-unnamed model will compete in the same arena as the Porsche 911, the Mercedes-AMG GT, and the Jaguar F-Type, among others. It will make its debut as a coupe, and it will spawn a convertible variant in 2021.

The GranTurismo and the GranCabrio aren't going away for very long. They will be replaced in 2021 and 2022, respectively, by models that will offer Maserati's first series-produced electric powertrain. When they arrive, Maserati's range of models will look strikingly different than it does in 2019.