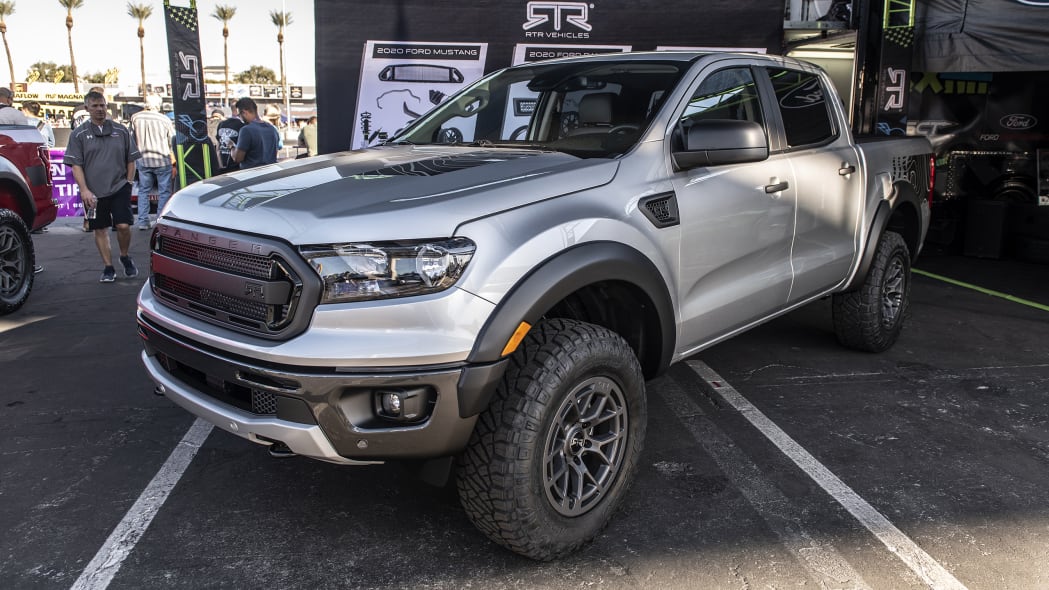 The Ford Ranger is one of the unexpected stars of this year's SEMA Show. Ford-affiliated tuner Ready to Rock (RTR) entered the Ranger parade with a subtly-modified four-door model.

RTR was founded by professional drifter Vaughn Gittin Jr., but its Ranger is happier crawling over boulders than going sideways around track. While it's not quite as macho as the F-150 Raptor, and far tamer than the Ranger Raptor-like rig built by PaxPower, it receives fender flares and Nitto Ridge Grappler tires that give it a buffer appearance. LEDs embedded in a custom-designed grille create a visual link between the Ranger and the RTR-tuned variants of the Mustang and the F-150.

We'd love to report the Ranger gains the Mustang's 5.0-liter V8, but the turbocharged, 2.3-liter four-cylinder engine remains tightly bolted to the frame. RTR did add a cat-back exhaust developed by Ford Performance, one of its partners, so the turbo four might deliver a little bit more than its stock, 270-horsepower output. Peeking under the truck also reveals Fox 2.0 performance coilovers.

The aforementioned RTR add-ons are bundled into a package priced at $9,800. It's available through select Ford dealerships, or directly from the tuner. The firm noted almost every Ranger trim level can receive the parts, though it didn't specify which one(s) aren't eligible. Buyers seeking more modifications can pay extra for a full leather interior, and a new-look grille with a light bar.

RTR's modifications are relatively mild; they only begin to explore the Ranger's potential as a blank canvas. Ford unveiled four design studies, including a yellow lowrider infused with 1990s style. California-based Hellwig Products transformed the Ranger into an overlanding rig decked out with over a dozen upgrades like 35-inch tires and a roof tent mounted on a Yakima bed rack. Finally, ARB displayed a handful of off-road parts tailor-made for Ford's smallest truck.