More than 1,000 pound-feet of torque and a whole lot of performance parts 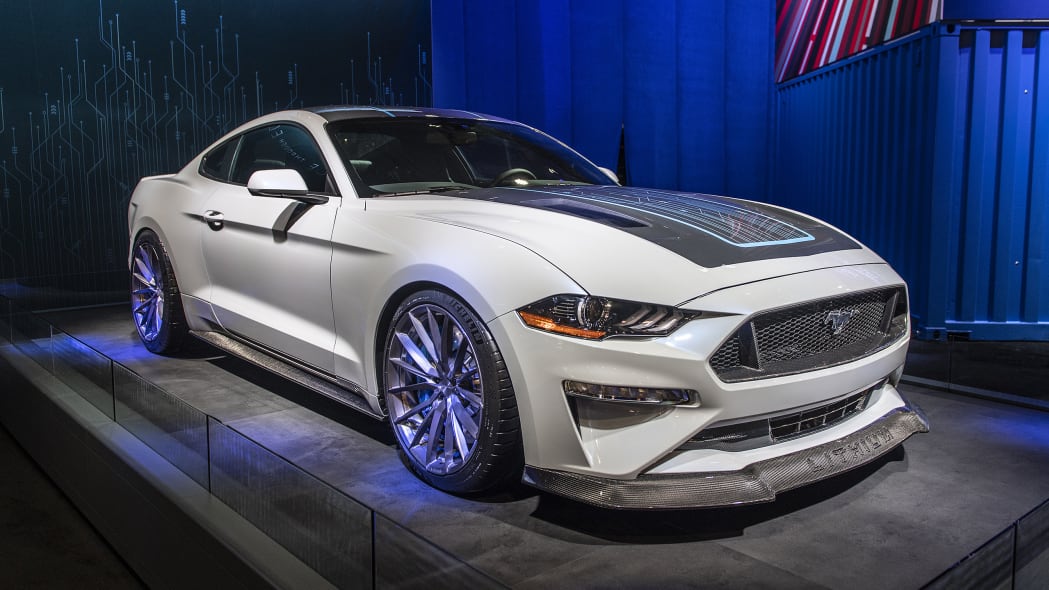 We all know quite well that the Ford Mustang-inspired Mach E electric crossover is ever so close to reality over at the Blue Oval. And we've seen some electric experimentation across the ponycar divide in the guise of the eCOPO Camaro from last year's SEMA show. Now, Ford and Webasto are replying to that Camaro with a well-and-true electric ponycar of their own for SEMA 2019, the Lithium Mustang.

The Lithium Mustang, Ford says, generates more than 1,000 pound-feet of torque and more than 900 horsepower, from an 800-volt Webasto battery system. A time was not quantified, but the word used for its quarter-mile performance was "stunning." The eCOPO Camaro, as you may recall, was billed at more than 700 horsepower and 600 pound-feet of torque, a wheelie-popping drag car capable of a 9-second quarter-mile.

Besides the electrified-output bragging rights and the splash factor for SEMA, the Lithium Mustang is serving a more practical purpose — as a testbed for battery and thermal management technologies that will go into future Ford EVs such as the aforementioned Mach E and the hybrid F-150 coming out in 2020 and all-electric F-150 that will follow. Ford says the 2020 Ford Explorer and Escape hybrids already use battery technology similar to the Mustang Lithium.

Ford, like virtually all other automakers, is throwing big money into electrification — in Ford's case, $11.5 billion. Some of that dough went into the prototype Mustang you're seeing here.

The Mustang has a six-speed manual, a drag-strip version of a Getrag MT82 with billet internals that can handle that half-ton of terrifying torque. It's equipped with Ford Performance half shafts and a Super 8.8 Torsen differential for the same reason. And though, yes, it promises a stunning quarter-mile time, Ford also says the Lithium Mustang can tackle track or street — your choice via drive modes dubbed Valet, Sport, Track and Beast — thanks to its Ford Performance Track Handling Pack. The car wears custom carbon fiber body panels, is lowered an inch from a stock Mustang, and is fitted with 20-inch staggered lightweight Forgeline wheels wrapped in Michelin Pilot Sport 4S tires. Brembo brakes off the Shelby GT350R are there to unwind all that power.

As for the electrical engineering, it has a "Phi-Power" dual-core electric motor and dual power inverters. The system's 800-volt architecture is double that of most EVs — notably, the Porsche Taycan has an 800-volt system. Webasto says this allows the hardware to be lighter, more powerful and generates less heat. Webasto says its EVDrive technology can discharge a megawatt of energy.

And you can marvel at all that science through Webasto's see-through hood panels.

“Ford has made no secret of the fact that we are electrifying our most popular nameplates,” said Hau Thai-Tang, Ford’s chief of product development. “This one-off Mustang prototype is a great opportunity for us, together with Webasto, to showcase to our customers what a new electrified powertrains can do for performance in a car they already know and love.”

The Lithium Mustang. said Mark Denny, Webasto North America president and CEO, shows "how cool the future of electric performance will be.”