It's more than 0-60 times, electric range and a high price. It's a real Porsche.

HAMBURG, Germany — Riding a burst of electrons, the 2020 Porsche Taycan Turbo S scorches the German Autobahn en route to Hamburg. Its projected range is becoming perilously low, which is to be expected considering I'm seeing 268 km/h on the dramatically curved digital instrument panel. That equates to 167 mph, and I haven’t dipped below 100 for the past half-hour. Pulling off the highway, another type of EV velocity is on display: inhaling DC at nearly 270 kilowatts, the Taycan replenishes its 93-kWh underfloor battery from 8-to-80 percent capacity in precisely 20 minutes. Based on my driving and calculations, it adds nearly 50 miles of range for every five minutes of max charging, resulting in the quickest “opportunity charging” of any EV. The expanding fast-charging network of VW Group's Electrify America is the other half of that equation, representing a key answer to Tesla's currently unmatched Supercharger network.

Yet, the prevailing, cage-match narrative that’s pitting Porsche's new EV against the Tesla Model S is largely irrelevant. To all but the wealthiest buyers, these electric sedans are too disparately priced to be considered direct competitors. The Taycan Turbo starts at $153,510; the Turbo S kicks things off at $187,610. Slap a few options on the Turbo S — a virtual certainty for any Porsche buyer — and you could be looking at a $210,000 electric sedan, easy. By contrast, the Tesla Model S starts at around $80,000 and tops out around $110,000.

Given that price and its much newer design, the Porsche damn well should be better than the Tesla, and it is, even if the electric range — likely a real-world 230 or 240 miles — falls disappointingly short of Tesla’s 300-mile heights. What you get for that lofty price is a four-door supercar GT, a technical and performance marvel that hints at the impending decline and obsolescence of Porsche’s traditional, gas-fueled cars.

Yes, this lovely, provocative, 911-esque sedan weighs more than 5,100 pounds, which is as much as a fully larded Cayenne SUV. Yet with as many as 750 all-wheel-drive horsepower available during automated launches or quick bursts of overboost power, the Taycan Turbo S bests the company's current top dog, the 911 Turbo S, in a 0-60-mph sprint – 2.6 seconds versus 2.8. In fact, it nearly matches the 2.5-second time of the company’s legendary, $845,000 918 Spyder Hybrid.

In normal driving, the Turbo S cranks out 616 horsepower and 774 pound-feet of torque, while the Turbo produces 616 hp and 626 lb-ft, good for a “mere” 3.0-second sprint to 60 mph with launch control. The lower output is due to a lesser-rated, 300-amp front axle inverter, versus 600 amps for the Turbo S. The rear axles of both cars have a separate electric motor and inverter, along with a unique two-speed transmission that shifts almost imperceptibly.

During an addictive series of launch-mode runs, we learned the importance of pressing skulls into the headrest before unleashing the NASA-style catapult, to avoid whiplash. Yet doing so also highlights a not-so-subtle point of comparison Porsche is trying to make in regards to Tesla: that the Taycan's systems and componentry are more reliable, and its resulting performance endlessly repeatable. Besides inherent differences in engineering and proving, Porsche's supposed advantage is due in part to a pioneering 800-volt electrical architecture (double that of the 400-volt Model S) that yields numerous benefits: dramatically reduced charging times, less strain on batteries and thermal management while charging, consistent high-performance output from electric motors, and sharply lowered weight and space requirements for high-voltage cables.

Yet I hesitate to even focus on stoplight parlor tricks, because 0-60 mph times have become the refuge of fools. A straight-line drag race does not tell the entire story: as enthusiasts and skilled drivers know, there’s more to performance than just stomping the accelerator and going “Wooo!” And that’s what separates the 2020 Porsche Taycan from every four-door EV – Tesla or otherwise. This car feels like a genuine technological descendant of supercars and racers like the 918 and 919, because it is. The electric steering could be more sensitive and the porky curb weight is noticeable in the sharpest turns, but this is a car that demands room to run, and when it gets it, look out. Turn-in and road-holding are breathtaking, and the Porsche suddenly feels more like a 4,100-pound super sedan. That serenity at boggling speeds will be familiar to any Porsche owner, and naturally it derives from Porsche's arsenal of chassis-enhancing technologies, including four-wheel steering and the Porsche Dynamic Chassis Control active roll stabilization system.

The brakes deserve their own chapter. Porsche is claiming class-leading levels of brake energy recuperation, and that 90 percent of stops in everyday driving can be achieved through regen alone, without activating friction brakes via a longer, firmer pedal stroke. But when you do, the mammoth brakes (including 10-piston caliper fronts as in the Porsche Cayenne and Lamborghini Urus) halt the Taycan with face-stretching force. Carbon-ceramic rotors are standard on the Turbo S and optional for the Turbo.

However, the brakes lack a selectable, strong-regen setting that would allow the one-pedal braking EV fans love. I certainly missed it during our first day driving. By the second day, however, I got it: Even an electric Porsche is supposed to drive like a Porsche, and that includes an uncanny mimicry of traditional coasting or engine braking when you step off the accelerator. Plus, there’s an excellently tuned Auto mode for regen, which uses a camera to monitor cars ahead and apply more regen when you’re rapidly closing the gap.

Furthermore, the Taycan sends most of its power to the front wheels when in "Range mode" to save energy, as the electronic clutch decouples the rear axles for free coasting. Pressing the accelerator harder, or changing modes, summons increasing bolts of power from the rear. Kicking things to Sport or Sport Plus mode turns the Porsche into an electric animal, a steely-eyed Terminator. It utterly changes one’s experience of passing slower cars, even compared with two-seat gasoline supercars, which still need a few beats to respond to throttle commands. In the Taycan, passing becomes more like teleporting: Other cars disappear, and you wake up in a new ZIP code, waiting for your physical molecules to pull themselves back together. 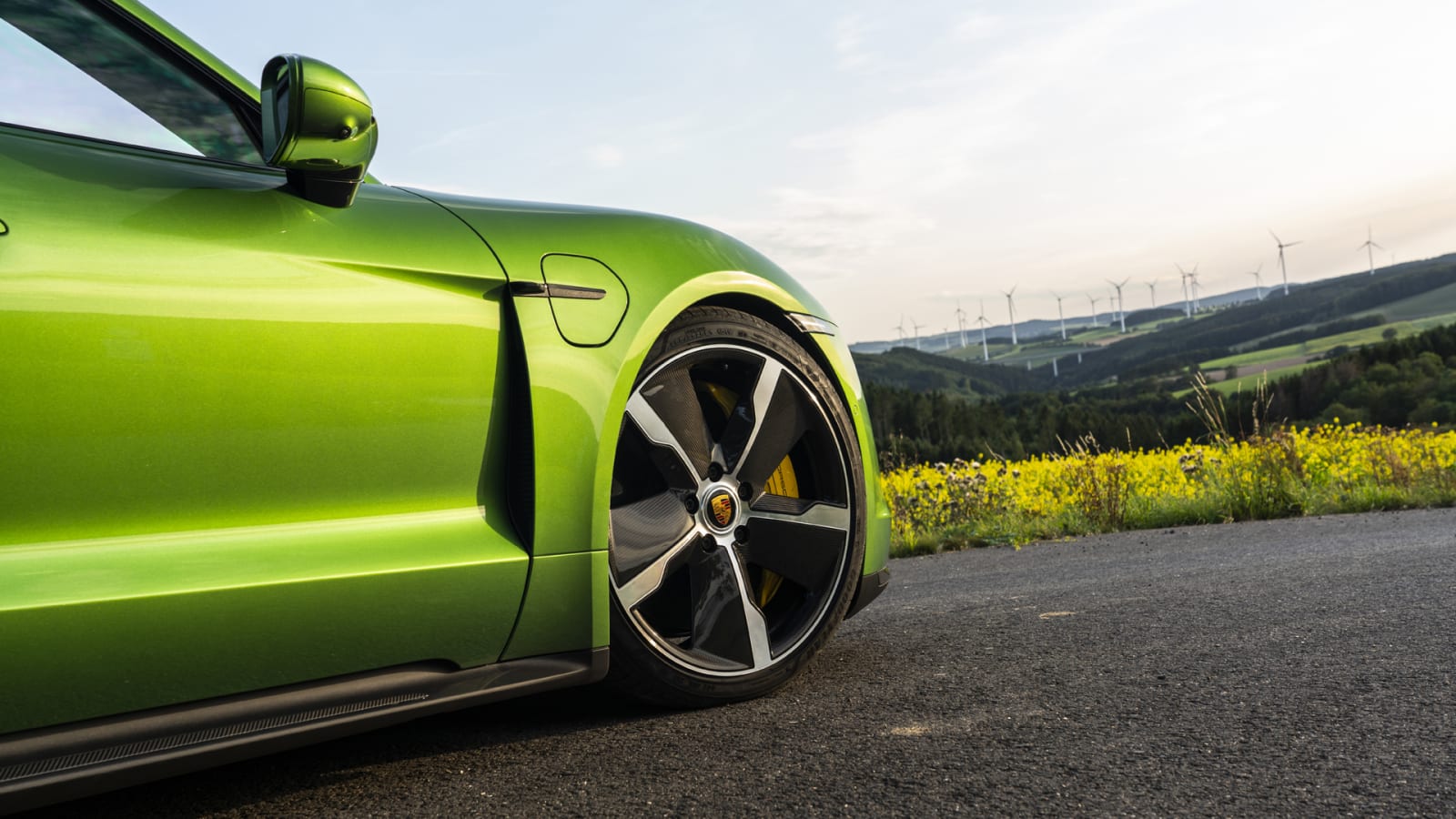 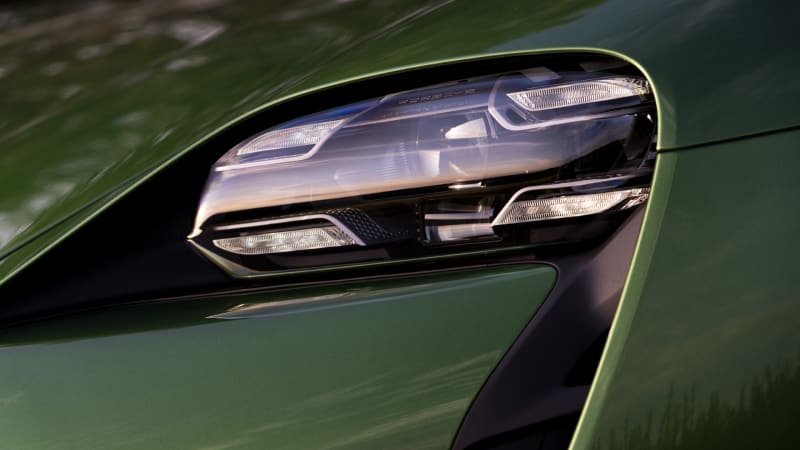 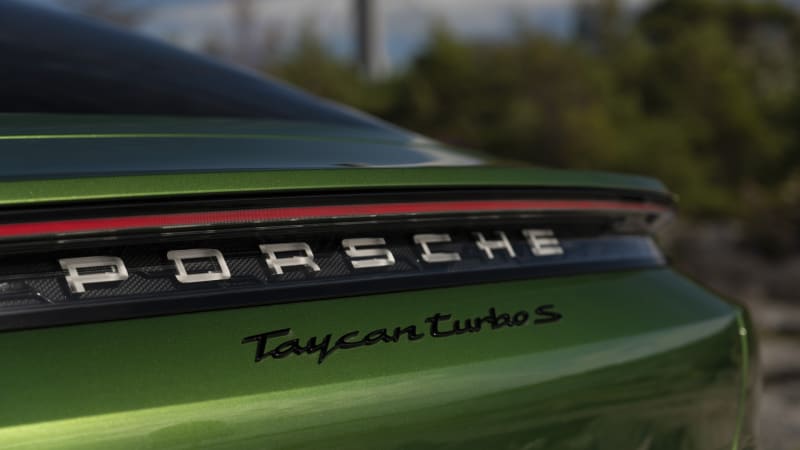 Visually, the Taycan is similarly exotic: the dramatic lighting and wheels; voluptuous only-a-Porsche rear end; the tumbling hood; the humped fenders and fast roofline. It's Porsche's most aerodynamic production model, checking in at a 0.22 drag coefficient, aided by an extended rear spoiler and teardrop-shaped air curtains below the headlamps that route air through the body and wheel arches. A supple, three-chamber air suspension lowers the car over two stages at high speeds to further reduce its aerodynamic profile.

High-tech minimalism rules the interior, including a dramatically curved instrument cluster and the two center touchscreens that are a modified version of Audi’s latest dual-screen MMI system (rather than the single widescreen found in other Porsches). Every hard key is effectively replaced by “touch response” screen controls with haptic fingertip feedback. It’s lovely to look at, but as in various Audis, there’s a steep learning curve, and I’ll cop to missing the trusty old MMI knob controller. The Taycan does share the Panamera's electrically powered climate control vents, which are high-tech cool, literally, but it’s also easier to reach out and twiddle a traditional vent.

Shoppers will definitely coo over the optional "Co-Driver" passenger display that’s more useful than the Ferrari Portofino's similarly placed but dumbed-down screen. Passengers get full control over functions such as audio, navigation or climate – or can keep an eye on their own personal speedometer and performance readouts.

The Taycan’s 12.9-cubic-foot trunk will swallow three big roller bags, with space left over for odds-and-ends. The Tesla’s is decisively larger, but its frunk is marginally smaller than the Taycan's 2.86-cu-ft space. Both can hold a small suitcase.

On paper, the Model S’ back seat offers more square footage, and allows three rear-seat riders in a pinch. The Porsche has a standard two-bucket arrangement (you can add a third seatbelt as an option, but the seat itself likely remains vestigial), and the narrow rear-door opening and tapered roofline demand a body-twisting entry and exit. But once ensconced, I actually found the Porsche’s rear seat to be more comfortable. It has more supportive, better-bolstered seats and a more natural position versus the annoyingly low seat cushions and knees-up stance of the Model S. The Porsche carves out just enough headroom for tall adults, and we discovered at the Taycan's reveal that two 6-plus-footers can sit front-and-back.

Yet, the Taycan isn't expected to challenge a Cayenne for comfort and practicality. Instead, the key question sought by Porsche cognoscenti is: Is the Taycan fun to drive? Hell yes. Both in the traditional sense and in the newfound entertainment value that can be ascribed to its technical novelty, physics-defying torque, giggly green vibes and otherworldly silence of an EV. Now, if you're addicted to the scale-chasing arias of a superstar engine or still fully wedded to shifting a car yourself – be it with three pedals or Porsche's PDK paddle shifters – another Porsche or high-powered luxury sedan may still seem more involving to drive.

Of course, that addiction to internal combustion also leaves you, and the world, hooked to a gas nozzle and all the nasty, pollution-belching business that entails. Finally arriving in Hamburg, our high-speed driving comes to an end as police barricades and sirens guide us, fittingly, around a climate-change protest. We found ourselves wondering: If we had been let through, would the masses of green-minded people who traditionally despise performance and luxury cars find themselves loving the all-electric Taycan, or at least cutting it some slack? Tesla has certainly earned such distinction. Perhaps we'll have an answer in time, but for now, we're confident that people who do in fact love performance and luxury cars will love the Taycan. The biggest bummer is that more of them won’t be able to afford one, even when Porsche manages to bring a more-affordable, lesser-powered version to market.

But for people who can foot the bill, the Taycan instantly becomes one of the world’s gotta-have automobiles.