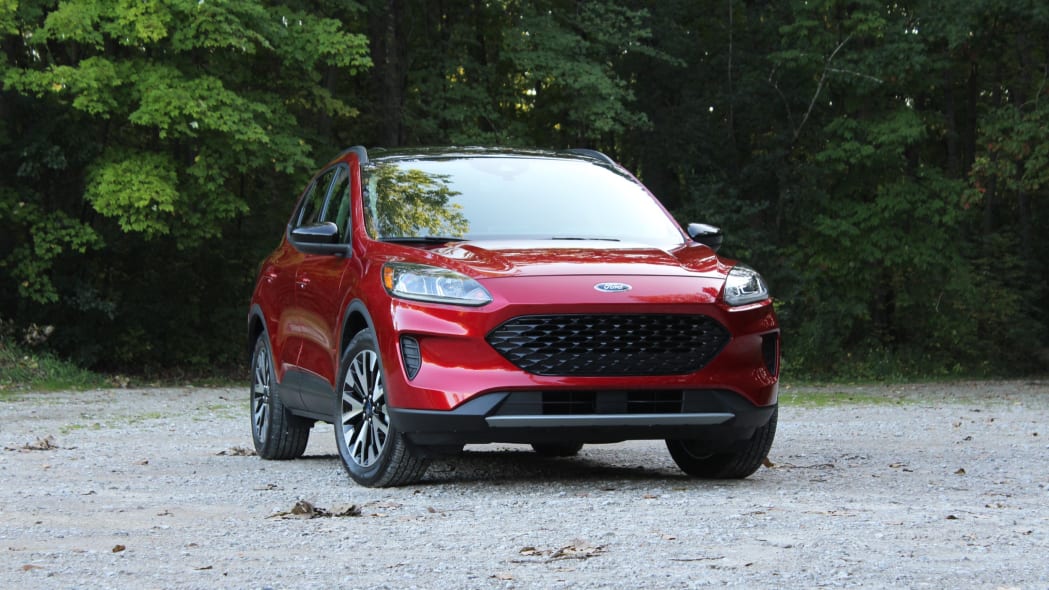 LOUISVILLE, Ky. — The 2020 Ford Escape hybrid drives a lot like its traditionally gas-powered siblings, and that’s a good thing. We've already told you about how the latest Escape is very car-like, with a playful chassis and a mildly sporty demeanor. The hybrid doesn’t change that character in any significant way – it’s no fun-sapping miserly version aimed solely at those trying to save a buck at the pump – and in fact it’s not even separated into its own model. The electrified powertrain first shows up in the lineup as part of the SE Sport package, which sits above the base S and SE trim levels. The hybrid powertrain is also available on the range-topping Titanium trim.

It seems a little strange to use the Sport designation, since the hybrid Escape isn’t sportier than any other 2020 Escape, not least of which being those powered by the 250-horsepower 2.0-liter EcoBoost. On the other hand, there isn’t any performance drawback, either.

So let’s focus on what’s different and interesting about the hybrid. Underhood is a 2.5-liter naturally aspirated four-cylinder engine running on the efficient Atkinson combustion cycle paired up with an 88-kilowatt electric motor. Combined, the hybridized powertrain sends 200 horsepower and 152 pound-feet of torque to either the front wheels, or optionally through the same all-wheel-drive system found in the regular Escape. 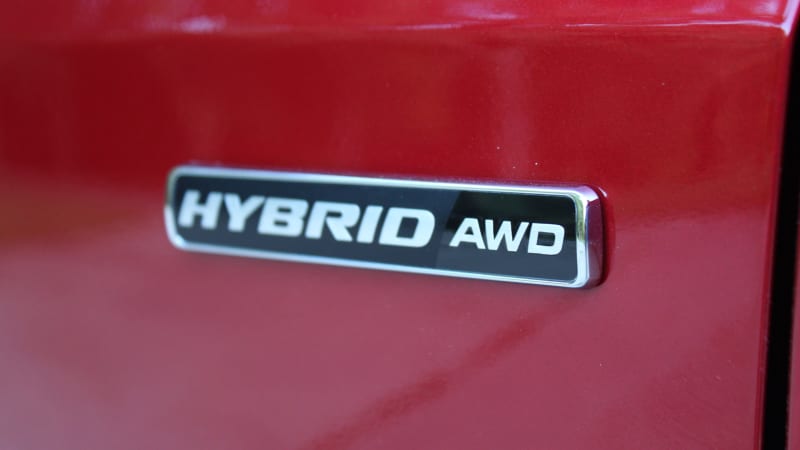 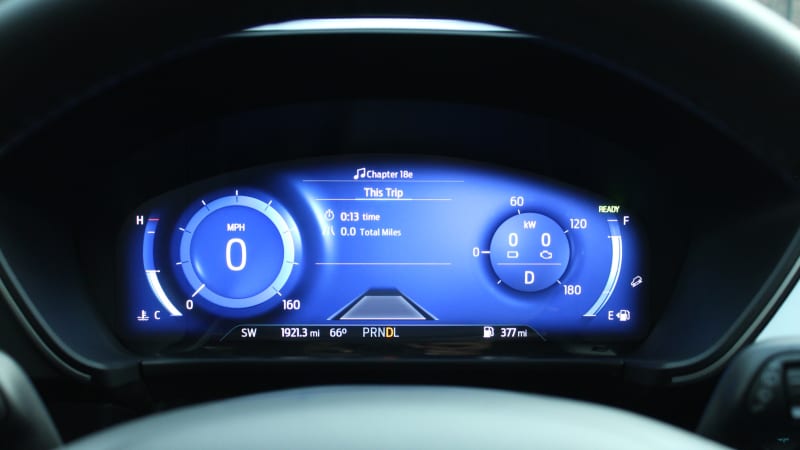 While the hybrid offers the lowest peak torque of the 2020 Escape’s three powertrain options, it doesn’t really feel that way from behind the wheel. The electric motor’s ample torque off idle helps the Escape SE Sport hybrid scoot off the line with reasonable oomph. Unlike EcoBoosted Escapes that use a conventional eight-speed automatic, the hybrid drivetrain features an electronically controlled continuously variable transmission that can drone at times, particularly during steady-state acceleration, as is the case with Toyota's hybrids.

Speak of the devil, the 2020 Escape hybrid's natural competitor is the 2019 Toyota RAV4 Hybrid, which produces 219 horsepower and 163 lb-ft while returning 41 mpg city and 38 highway. Normally, we’d compare that directly with the 2020 Escape hybrid’s economy numbers, but Ford hasn’t released their EPA estimates yet. We can glean some hints from other specs: Ford expects the Escape SE Sport to have a range of more than 550 miles from its 14.2-gallon gas tank. Some back-of-the-napkin math indicates the hybrid Escape should get something near 39 mpg on the highway, though that estimate probably applies specifically to the front-wheel-drive version.

If there’s an efficiency discrepancy between the hybrid drivetrains of the RAV4 and Escape — and again, we won’t know for sure until there are official EPA estimates — it may be due to the Ford’s smaller liquid-cooled lithium-ion battery pack, which at 1.1 kWh, is down half a kilowatt hour from the nickel-metal hydride Toyota.

The location of Ford’s battery pack under the car (as opposed to under the back seat as in the hybrid RAV4) means the floor under the rear seats is raised by about 1.6 inches, which reduces rear seat legroom from a maximum of 40.7 in the non-hybrid Escape to 38.9 in the hybrid. The cargo area is similarly reduced from 65.4 cubic feet to 60.8, well below the 69.8 offered by the RAV4 Hybrid. Ford says the Escape’s hybrid powertrain is rated to tow up to 1,500 pounds, which is less than the RAV4’s 1,750-pound rating and a lot less than the 3,500-pound max rating of an Escape with the 2.0-liter EcoBoost.

The Escape SE Sport hybrid starts at $29,450 (including a $1,195 destination charge). That’s $1,160 more than the SE with its standard 1.5-liter three-cylinder, but it also includes a 12.3-inch digital instrument cluster that adds a premium, techy feel to the cabin. That strikes us as a reasonable price increase for what we expect will be significantly improved fuel efficiency and mildly improved performance over the base 1.5-liter engine. The Hybrid Titanium costs $34,595 and includes a leather interior with heated and powered front seats, a 10-speaker Bang & Olufsen sound system, and Ford’s Co-Pilot360 Assist+ system.

Like other 2020 Escapes, the hybrid’s chassis feels stiff, which helps contribute to a comfortably firm ride and playful handling characteristics. The steering is reasonably quick though devoid of much feedback, which is pretty much par for the compact crossover course. We spent most of our time in the default Normal drive mode, figuring that’s where the majority of owners will keep their Escapes, and found that it offers good response and generally refined manners from the engine and transmission. There’s an Eco mode that makes the Escape feel a bit sluggish, but it ought to prove handy for owners who want to eke out max mileage from a tank of gas.

The hybrid is palpably slower than the optional 2.0-liter EcoBoost, but while we didn’t do any instrumented testing, it feels like it will dispatch the run to 60 with greater pace than the base three-cylinder. Ford targeted a 15% quicker 0-60 time for its new hybrid Escape compared to the previous generation’s base 1.5-liter turbocharged four-cylinder, and we’d wager they hit the mark. As you’d expect, the gas engine fires at anything more than gentle acceleration at low speed, and while the driver may sense a change in vibration, the transition from pure electric to internal combustion isn’t bothersome. 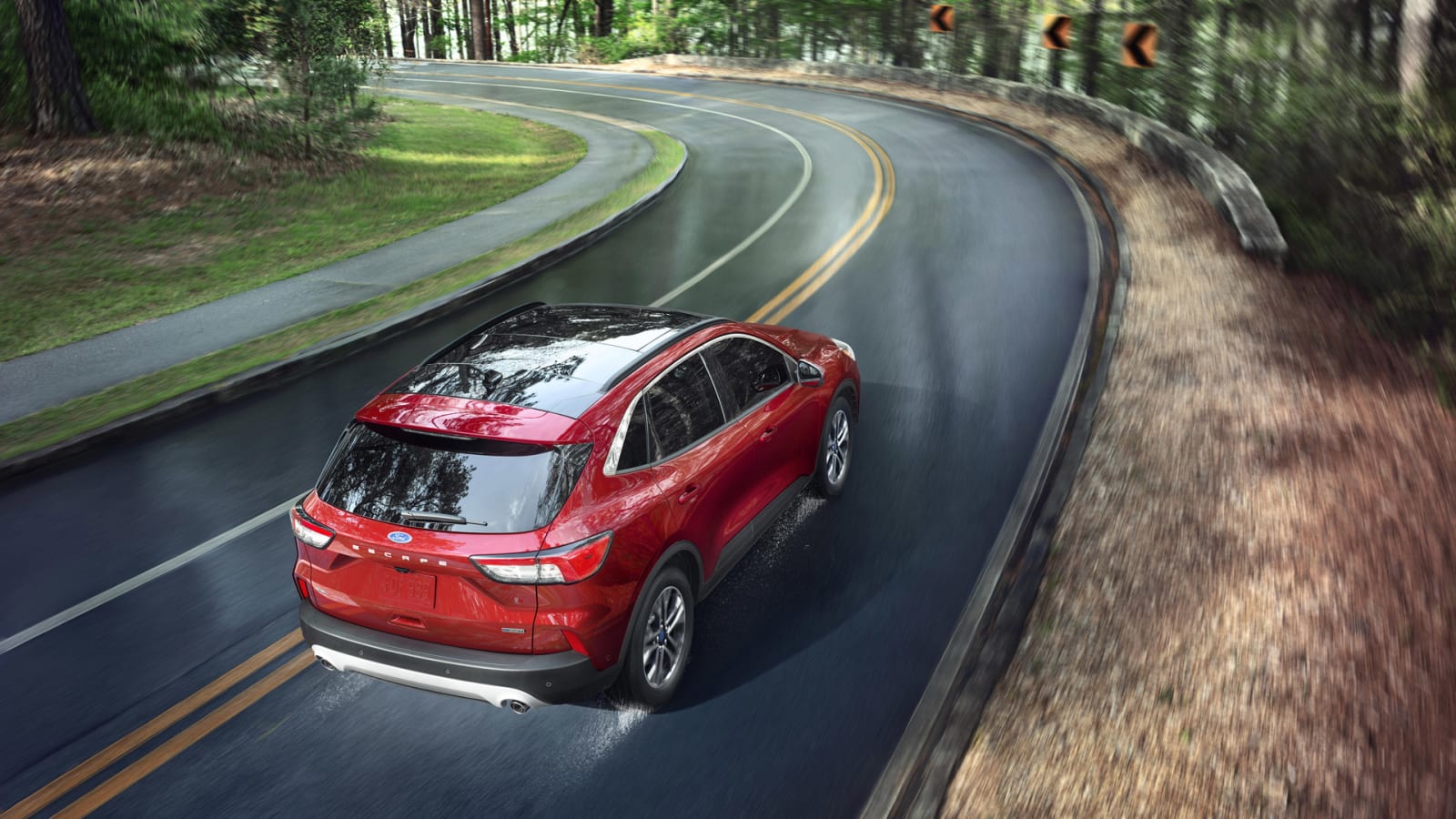 Ford says it can run solely on electricity up to 85 mph, and we found that speed to be sufficiently high that the hybrid Escape shuts off its gas-powered engine often and – as long as we were very easy on the throttle – for extended periods of time. The digital display shows how much of the current drive has been accomplished under electric power, and we were surprised to see that nearly half of the 100 or so miles we spent behind the wheel used no gasoline at all. When it comes time to stop, we didn’t notice any glaring issues with the transition from regenerative to friction braking, either.

Buyers looking for maximum fuel savings will be more interested in the upcoming Escape plug-in hybrid that’s projected to offer at least 30 miles of electric propulsion. Until that model comes sometime next year, we think most owners will happily drive the hybrid Escape without ever concerning themselves with the different powertrain. And that’s the point of this particular hybrid option. If you can live with the reduction in rear seat and cargo space, the regular non-plug hybrid-powered model offers the same car-like package, semi-sporty ride and handling, and attractive looks as any other 2020 Escape. What we’re not sure about, and won’t really know until official efficiency figures show up, is if it’s a better option than Toyota’s latest RAV4 Hybrid or the recently announced 2020 Honda CR-V Hybrid.