Electrification is shaping the leisure segment, too.

Car companies from all over the automotive spectrum will make international headlines next week by presenting hybrid and electric cars at the biennial Frankfurt auto show. Camper van and motorhome manufacturers got a head start on the rest of the industry by presenting their green solutions at the Dusseldorf Caravan Salon. The show confirms electrification is present in the leisure segment, too.

German camper experts Dethleffs introduced a plug-in hybrid, pop-top camper based on the full-size Ford Transit van. Called Globevan e.Hybrid, it relies on a 126-horsepower drivetrain built around a turbocharged, 1.0-liter EcoBoost three-cylinder engine. The system can power the camper on electricity alone for up to 31 miles.

Adventurers who leave with a full tank and a full charge enjoy 310 miles of driving range, which is an impressive figure for the camper van segment. Charging the battery pack takes 5.5 hours when using a regular household outlet, according to the manufacturer, or three hours when hooking it up to a quick-charging station. Globevan production is tentatively scheduled to begin in 2020, and pricing starts at 75,000 euros, a sum that represents approximately $83,000.

EFA-S took electrification a step further. Starting with a Fiat Ducato, a van known as the Ram Promaster in the United States, it yanked out the turbodiesel engine and replaced it with a 140-kilowatt electric motor fed by an 86-kilowatt-hour lithium-ion battery pack. The company pegs the camper's driving range at up to 186 miles, a relatively low figure which hardly reflects how most vacationers use their van. The pack takes four hours to charge, Auto Motor und Sport learned. 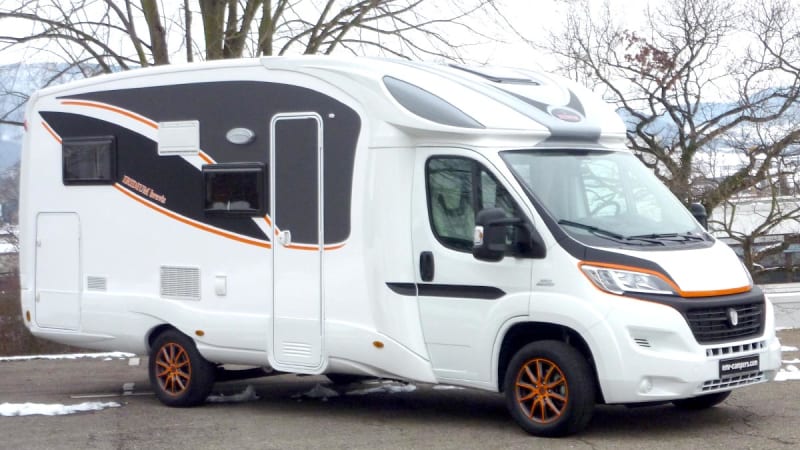 While sustainable, zero-emissions tourism is difficult to argue against, the Ducato-based camper suffers from two serious setbacks. First, the battery pack makes it so heavy that it can't be driven with a regular license. It's considered a heavy commercial vehicle. Second, its 160,000-euro (about $177,000) price tag makes it twice as expensive as a diesel-burning model, and puts it in the same price range as much bigger, more powerful, and more luxurious models. EFA-S will nonetheless move forward with production in 2020, though it plans to build no more than 30 units.

The caravan Salon is not only about hybrids and electric cars, however. Hymer presented a Sprinter-based concept car named VisionVenture that hints at what camper vans will look like in 2025, and Ford turned the Transit van into a spacious home on wheels named Big Nugget.