Porsche Taycan vs Tesla Model S | How they compare on paper

The Porsche Taycan is here, and it’s ready to upset the apple cart. Tesla has owned the performance side of the electric car segment for a long time now. Much of that can be attributed to there not being any competition, but with the Taycan’s reveal, things are changing quickly. Up until this point, nobody had an electric car that could go head-to-head with the Model S. We had to compare it with gasoline-powered cars or electric crossovers.

Now we can all feast our eyes on the first comparison chart that pits the best of the Taycan up against the best of the Model S. We chose to use the Taycan Turbo S and Model S Performance models for the comparison, just so we can see what peak performance looks like for both cars. Both have slightly less powerful variants (Turbo and Long Range respectively), and we’ll consider those models briefly in our text below the chart. 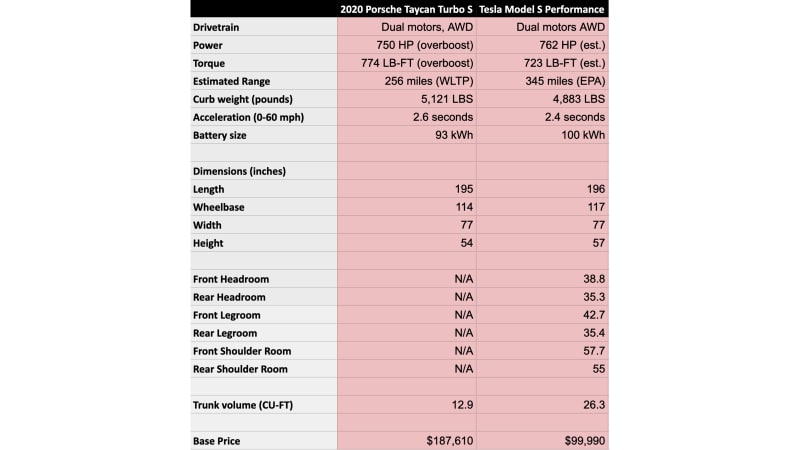 From a numbers standpoint, the Taycan Turbo S and Model S Performance are close. Since Tesla doesn’t post final, combined power and torque figures, we had to estimate. Still, the estimates beat the Taycan Turbo S, but only just. Porsche says that the figures we’re looking at here is the power it makes in “overboost” mode on the Turbo S. The Taycan Turbo and Turbo S both make 616 horsepower when you’re not using the overboost function. We imagine Tesla’s figures are also from some sort of “overboost” function, as the spec sheet says it’s the “maximum net power” and “maximum torque.” However, no other power specs are listed for the Model S Performance than those given here.

What really matters is how fast it goes. The 0-60 mph time on the Tesla is 0.2 second quicker than the time quoted for the Turbo S. Both use dual motors (one front and one in back) to put the power down, giving both vehicles all-wheel drive. It’s difficult to give one the nod over the other from a straight line speed perspective, but Porsche has stressed repeatability in its acceleration numbers. If the car is able to maintain these acceleration figures like Porsche says it can (we completely trust Porsche on performance claims) then the edge would swing way into Porsche’s favor. This “longevity” claim is something we’ll examine upon getting in the Taycan’s driver’s seat. Porsche also has a bunch of great performance add-ons like rear-wheel steering, PCCB (ceramic composite brakes), electronic limited-slip differential and a trick two-speed transmission for the rear axle. The Taycan and Model S are incredibly close in size. With the Taycan coming in at 195 inches in length and the Model S at 196 inches, these two are natural competitors. If anything, the Taycan is slightly smaller and sleeker than a Model S, as it comes in 3 inches shorter than the Tesla in overall height.

Unfortunately, we can’t compare interior specs for the time being. Porsche hasn’t released the all-important legroom, headroom and shoulder room numbers, so that will have to wait. We do know cargo capacity, though. It’s here that Tesla handily wins again, as the Model S has a hatch. It’s far more cavernous than the Taycan, more than doubling the total cargo capacity with the rear seats up at 26.3 cubic-feet. Porsche takes a small victory when it comes to the frunk, though. At 2.9 cubic-feet, it’s slightly larger than the 2.1-cubic-foot frunk in the Model S. 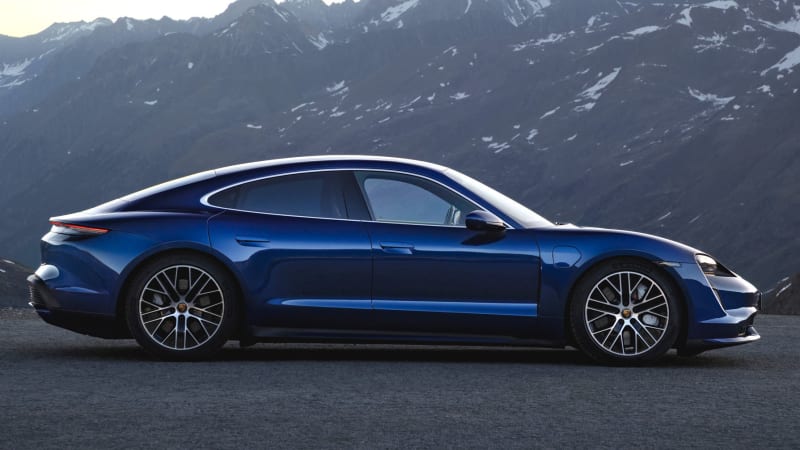 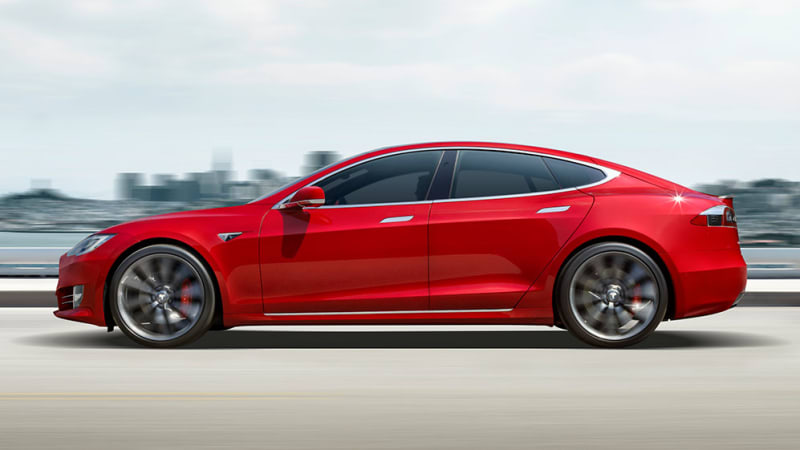 The range argument is hardly even necessary in this case. Tesla easily wins with the Model S, netting a 345-mile range with the Model S Performance. The Taycan Turbo S will only take you 256 miles on a full charge. Nothing gets better for the Porsche when you drop down to both cars’ cheaper and slightly slower variants. The Model S Long Range will take you 370 miles on a full charge, according to EPA estimates, where as the Taycan Turbo will go approximately 280 miles. Porsche’s figures are WLTP numbers, though, so we’ll circle back to this discussion when the final EPA numbers come out.

As for the battery packs, both cars use sizable lithium-ion packs mounted under the floor. The Tesla Model S has a 100 kWh battery pack, and the Taycan uses a 93 kWh pack. Charging times of that battery pack is where Porsche begins to make its heady claims. It’s able to go from 5 percent to 80 percent charge in 22.5 minutes in ideal charging conditions. If Tesla is able to get the Model S to charge at the rates it’s claiming for the Model 3 on new V3 Supercharger stations, the time to 80 percent will likely be around 20 minutes, give or take a few depending on conditions. If the promised Model S software update to V3 charging capability isn’t as potent as the Model 3, then expect it to be a fair bit longer than 20 minutes. We knew the Taycan was going to be expensive, and Porsche didn’t surprise us from that aspect. Still, there’s no way to get around the $187,610 starting price for the Turbo S. And that’s before options. The Model S Performance is relatively cheap at $99,990 before adding the only couple of options that are available. You’ll be able to get the Taycan Turbo for $153,510 at launch, but that’s still way more expensive than the Tesla.

We think the proof will be in the drive. Porsche never disappoints with the way its vehicles drive, and we don’t expect the Taycan to be an exception. Do note that you’ll get the full $7,500 tax credit on a Taycan in America. It’s hard to get too excited about that amount of money when a Taycan equipped with a few pricey options will skyrocket above $200,000 really quickly.