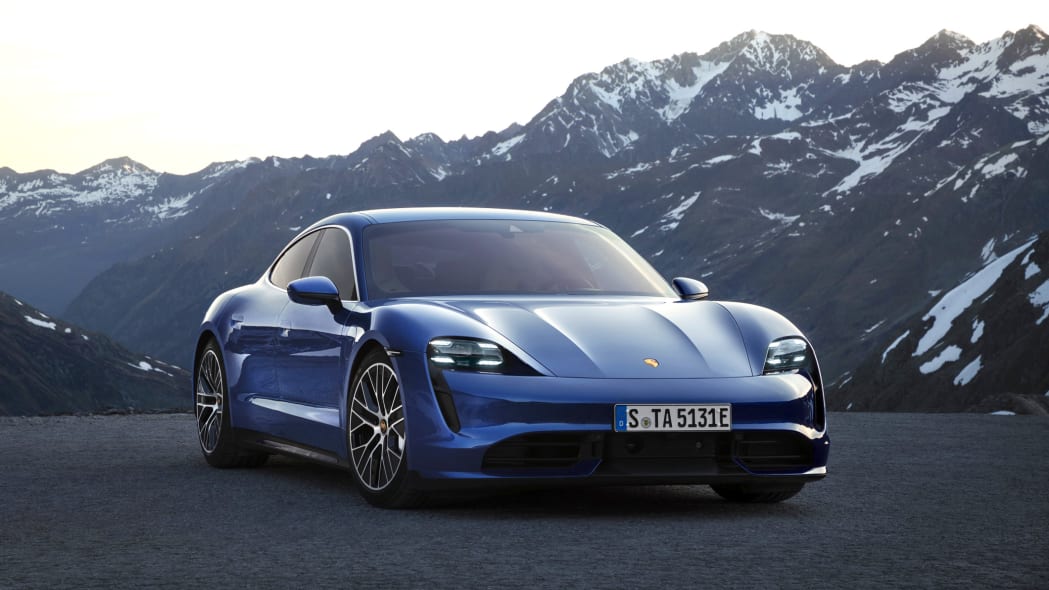 ATLANTA — After years of concepts, teasers, spy photos and rampant speculation, the 2020 Porsche Taycan is here. Although Porsche has been building hybrids for years now (including the 918 Spyder supercar), this is Porsche’s first foray into the world of EVs. It’s new and exciting ground for the German automaker, one many (including all of us here at Autoblog) are quite excited for. The Taycan Turbo and Turbo S will go on sale later this year, with other trims and a wagon variant based on the Mission E Cross Turismo concept following sometime in the next year.

Yes, despite containing no internal combustion engine to attach a turbocharger, Porsche is using the Turbo and Turbo S names for the Taycan. Porsche says it's using the name so customers can equate it to top-level trims on its other vehicles, but we still think it’s a little dumb. In terms of size, the Taycan slots below the Panamera and is roughly the same size as a BMW 5 Series, Mercedes-Benz E-Class or Tesla Model S. The design is nearly identical to the Mission E concept we saw a few years back. It’s handsome and purposeful and distinctly Porsche. Don’t worry: Those fake exhaust tips on all the prototypes were just there for show.

Both Taycan models are fully electric, sending power to both axles courtesy of a pair of permanently excited synchronous electric motors. These are expensive to use, but Porsche says the benefits — a compact design, good power density and good heat management — outweigh the increased cost. The front axle uses a single-speed gear set with an 8:1 ratio. The rear axle uses a two-speed transmission, an unusual trait for modern EVs. First gear is used for acceleration. The Taycan shifts around 62 mph, and top speed for both models is 162 mph.

The Turbo and Turbo S both make 616 horsepower. Using an “overboost” function, the Taycan can make up to 670 horsepower, while the Turbo S sends up to 750 horsepower to the wheels. Peak torque is 626 and 774 pound-feet respectively. The torque split is fully variable between the two axles. The Taycan hits 60 mph in 3.0 seconds in the Turbo and 2.6 in the Turbo S. Note that those are both slower than Tesla’s numbers for the Model S. The phrase Porsche kept repeating was “repeatable performance,” making the point that these cars focused on all-around performance rather than straight-line acceleration. That said, the Turbo does the quarter mile in 11.1 seconds. The Turbo S drops that to 10.8.

Porsche cites a range for the Taycan of 450 kilometers (280 miles), though no official EPA test number is available yet. Like most pure EVs, the Taycan’s lithium-ion battery pack is mounted on the floor in a “skateboard” setup. At the back, the battery forms a “T” shape with cutouts in the floor to increase backseat foot room. Total battery capacity is 93 kWh. The Taycan uses an 800-volt charging system as opposed to the 400-volt setup in most other EVs. This drastically reduces charging times, though the 270 kWh peak is still limited by the battery. Porsche expects that to improve to 400-500 kWh as technology improves. In optimal conditions, the Taycan can go from 5 percent to 80 percent in 22.5 minutes. That is limited by temperature and the charging infrastructure.

Porsche is working with Electrify America and Electrify Canada to increase the number of charging stations in North America. New Taycan owners get 30 minutes of free charging for the first 3 years of ownership. The limit was put in place to keep people from blocking chargers. Porsche Charging Service is a system that uses one account with one bill to access roughly 2,700 charging stations.

At 5,121 pounds, the Taycan is a bit of a pig, too. Still, the center of gravity is lower than that of a Porsche 911, and a brief ride-along showed the car moves and handles with grace. The Turbo and Turbo S both get three-chamber air suspension derived from the Panamera. Other Panamera parts include the control arms and bushings. Like many performance cars these days, the Taycan uses an electronic limited-slip differential instead of a mechanical unit. Porsche Dynamic Chassis Control is optional. The system helps reduce body roll, oversteer and understeer. Stability control has three settings: PSM On, PSM Sport and PSM Off, the latter fully disabling the system. The Turbo comes equipped with 20-inch wheels with 245/45R20 tires up front and 285/40R20s in the rear; the Turbo S increases that to 21 inches with 265/35R21 front tires and 305/30R21 section rears. 20-inch wheels will fit on both models, improving the variety of available winter rubber. 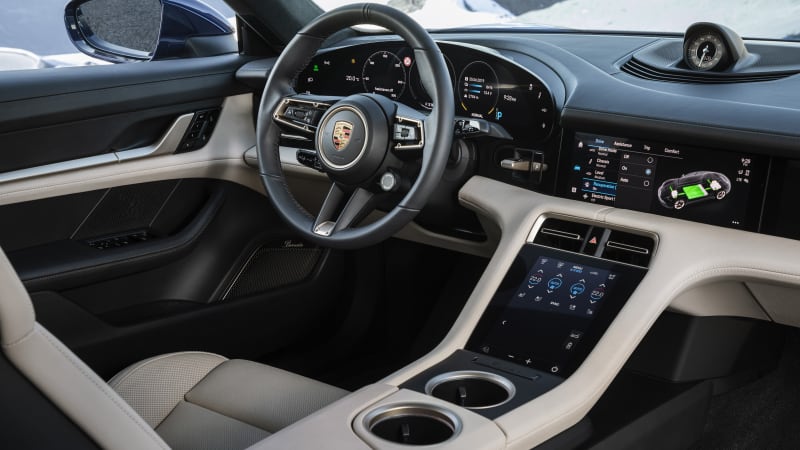 There are five drive modes: Normal, Sport, Sport Plus, Range and Individual. Normal mode offers a moderate amount of power, but it’s balanced more for efficency as opposed to out-and-out performance. Sport and Sport Plus keep the car in first gear longer, increase throttle response, open cooling flaps, raise the rear spoiler for improved aero and lower the suspension by up to 22 mm. The Taycan comes with rear-axle steering like the 911 GT3, helping improve the car’s handling by virtually shrinking the wheelbase. Range mode sets up the car for maximum efficiency and uses only second gear, while Individual mode allows for mixing and matching of various settings.

The interior is unlike anything else Porsche makes, though it still has a look and feel that ties it in with other vehicles in the lineup. Take a look at our post from last month for a full deep dive. Big things are four digital displays, electronically-controlled air vents and an optional leather-free interior. The Taycan uses a trunk instead of a hatch like the Panamera. There’s a frunk, though Porsche says it’s smaller than the one on the 911. The rear seats fold in either a 40/60 or 40/20/40 split depending on configuration.

Starting MSRP at launch for the Taycan Turbo is $153,510, though it will eventually drop back to $150,900. The Turbo S will sell for $187,610 at the outset, with the price eventually settling at $185,000. No destination fee has been listed yet. The first cars will get a glass roof and mid-level charger as "standard options” that were added automatically, hence the higher initial prices.

Porsche is ramping up production at its Zuffenhausen factory. Expect to see the Taycan Turbo and Turbo S on sale later this year.