We get our first real look at the Porsche Taycan interior

Here's what you can expect from its space, quality, features and technology

NIAGARA FALLS, Ontario — While Road Test Editor Reese Counts got all the mechanical details and specs for the Porsche Taycan last week in Atlanta, we got our first chance to get up close and personal with it today. The all-new, all-electric Taycan was simultaneously revealed in Niagara Falls, Ontario, home to one of the most famous hydro-electric generation stations in the world, as well as at a wind farm in China and a solar array in Germany. I'm guessing we had the best view, though, as the car rolled onto the stage just as a huge set of doors/video screens opened to reveal the American falls in the background. Pretty cool.

We've already answered most of your likely questions regarding power, range and price. We also broke down what we can expect from future Taycan models, as well as its available color palette. So let's discuss the interior, of which I was able to climb around and discover a few things that might not be evident by the photos and specs.

In terms of size, the Taycan is smaller than a Panamera, and you can tell inside. As is usual for Porsche, the driving position is sensational, with massive wheel telescoping and ample seat adjustment for someone 6-foot-3 like me. With that seat set as such, the seat back was touching the knees of a 6-foot-2 passenger in back. If set so that there was enough room for him, I'd still be perfectly comfortable. Headroom back there was just sufficient for both of us, and the seat itself is a comfortable distance from the floor. 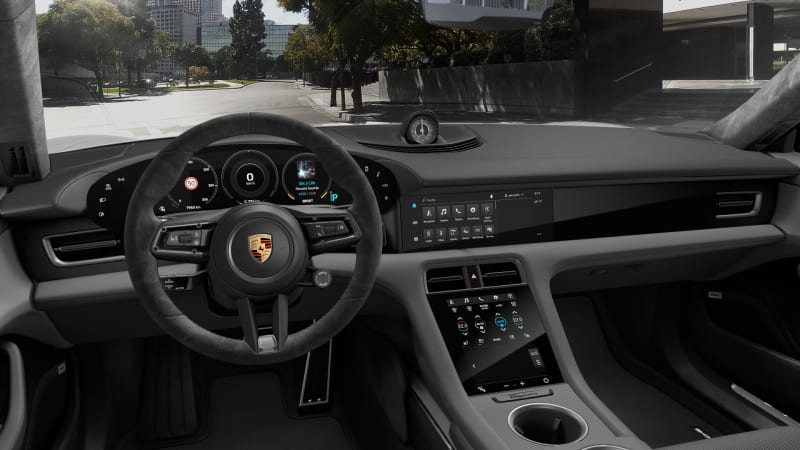 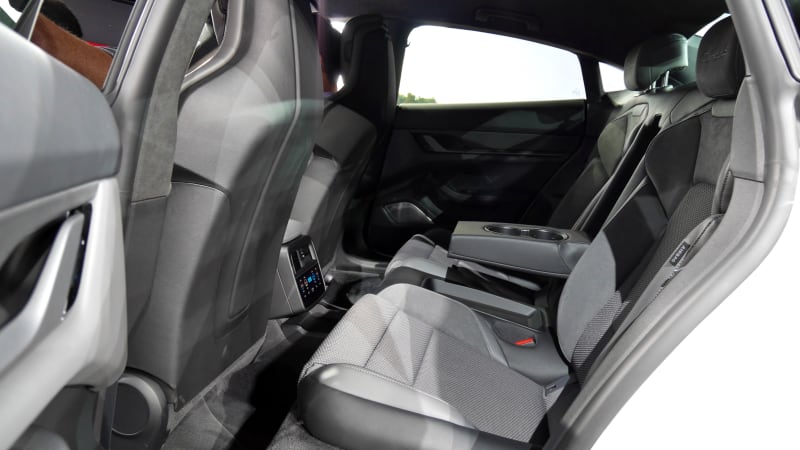 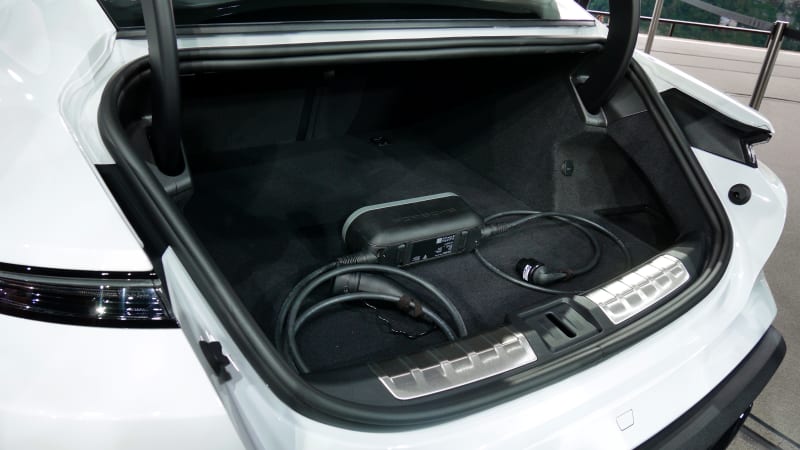 Ingress and egress are an issue, however. Besides the raked roofline, there's little space between the door, front seat and back seat. Just about everyone's shoes got caught in some way while exiting the Taycan's back seat. There's also the matter of passenger count – the Taycan only seats four standard, with a "2+1" rear seat arrangement available for $480 – which wasn't on hand, but it's safe to assume that no one over the age of 5 will fit in that "+1" middle rear seat.

The trunk provides 12.9 cubic feet, which is comparable to many coupes. It's quite wide, so golfers are in luck. There's a modest under-floor compartment – perhaps the depth of a pizza box – as well as deep bins on either side of the floor that should be big enough to house the charge chord. There is also a 2.86-cubic-foot frunk, which should probably hold a duffle bag or some groceries, but it is much smaller than a Porsche 911's. It's marginally bigger than that of the current all-wheel-drive-only Tesla Model S (the original rear-drive Model S frunk was bigger).

It's probably a good point to mention that car, because although the Taycan can't match the Tesla's cargo and passenger space, its interior quality is vastly superior. Everything you see and touch is up to Porsche's usual, impeccable standard. The cars on hand in Niagara featured the Race-Tex cloth interior in Black and Slate Gray. This is a no-cost option, as is leather. There is an upgrade "Olea Club" leather interior available in three color combos, but we didn't see that. Race-Tex consists of suedecloth bolsters and headrests with the inner portion in a textured tech fabric that distinctively allows for seat ventilation. It looks and feels expensive. The steering wheel and headliner are wrapped in suedecloth, while there's perfectly acceptable vinyl and rubbery stuff on the dash and doors. The latter can be wrapped in leather. 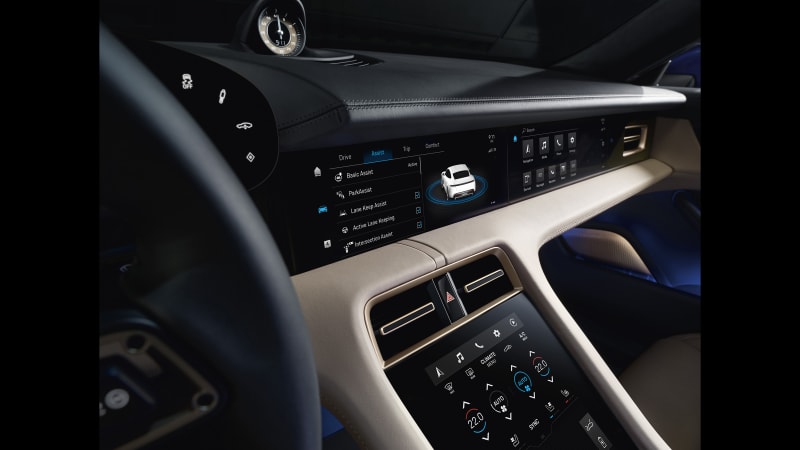 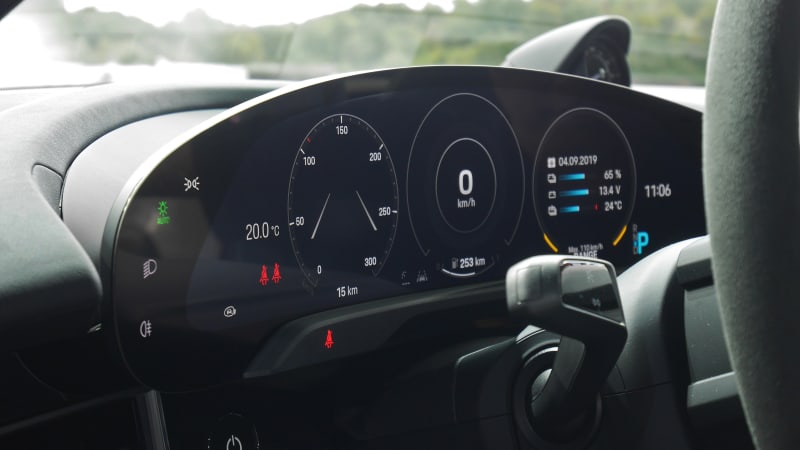 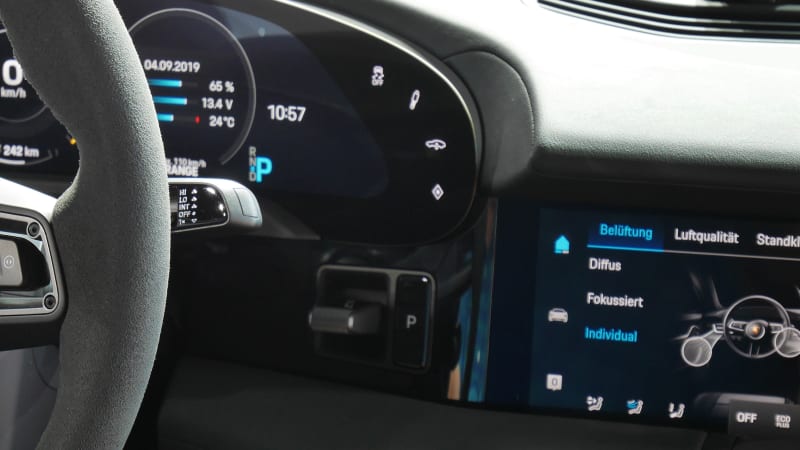 At first glance, the Taycan interior's design seems familiar. There's the rising center console, the big touchscreen, the round-dial instruments and even a dash shape that evokes the long-long-running original 911. However, look closer and you'll realize the Taycan is in fact revolutionarily different.

Those instruments are actually entirely digital, and reside in an industry first: a curved screen. It can mimic traditional dials, be replaced by the navigation map (like Audi's Virtual Cockpit) or black out basically everything but the speedometer a la Saab's old Night Panel. Integrated into the cowl-less panel are touch-sensitive buttons for the lights (left side), and suspension and stability control (right side). Below those is the electronic shifter, which doesn't look quite as goofy as the same piece does in the new 911. I'm not sure how flipping up for Reverse and down for Drive will work in practice, though.

On the opposite side of the steering wheel is a push-button start – another first for Porsche. You don't actually need it, however, as, like a Tesla, you can just walk up to the car, get in and put it into Drive if you'd like.

There are then three touchscreens in the dash. The main one is the same piece of hardware you'll find in the Cayenne, new 911 and others, but the user interface is unique to Taycan. It doesn't have the same permanent stack of menu buttons on the left side, for instance. Instead, they seem to be down on the climate control screen below, which doesn't make a ton of sense to me. That lower screen has haptic feedback when adjusting the climate control system, and the icons are pretty large. There's another climate touch panel for back seat passengers. Both feature electronically-controlled air vent direction.

Then there's the optional second touchscreen located in front of the passenger. It can basically do everything the driver's screen can except for change vehicle-related systems like the suspension. Honestly, it's a bit weird, but hey, why not? Instead of one gigantic (and arguably distracting) screen as in a Tesla Model S, Porsche gives you four pretty big ones.

Other tidbits: There's a Sport Chrono dash-top clock available, additional storage can be found under the "floating" center console, the under armrest bin is pretty small, and the center cupholders seem useful enough. Rear visibility looks to be atrocious, and although a backup camera is standard, parking sensors and a surround-view camera system are bundled together as an option.

So that's what you can expect from the Porsche Taycan interior. The only thing really left to do is drive the Taycan Turbo and Turbo S, which we'll be doing later this month. Judging by what I saw and heard in Niagara Falls, expectations should be sky-high.