Which is the better combination of style and performance?

The Kia Stinger GT is a sporty midsize sedan with a sleek hatchback roof and a luxurious interior, so it makes sense that it's frequently been compared to high-end German cars of a similar description. While it has generally faired quite well against the likes of the Audi A5 Sportback and BMW 4 Series Gran Coupe despite its commoner badge, it's unclear how many potential Audi and BMW buyers are going to also consider a Kia. So, what else can be thrown at it?

Well, the Stinger has a bold, brash exterior the Germans can’t match, while boasting loads of space, features and performance at a discount price. You know what that sounds like? The Dodge Charger, which we recently had in the Autoblog garage. It's not exactly an apples-to-apples choice – bigger, no hatch, a pair of extra cylinders – but the two sedans are close on price, especially the 2019 Dodge Charger R/T Scat Pack that arrived at our office with an MSRP of $46,075. That’s just a few hundred less than our long-term Stinger’s price of $46,620. So I decided to try them back-to-back to see which is the better bargain bruiser. The Charger takes an early lead with its 6.4-liter naturally aspirated V8, which generates 485 horsepower and 470 pound-feet of torque – a big advantage over the Stinger’s 365 horses and 376 pound-feet. But it’s not just the power that gives it the edge, it’s that it makes all the right sounds, and it’s so smooth and responsive. Any amount of throttle yields a charmingly round, mellow sound, with just a hint of grit. It’s vintage American rumble in a modern(ish) wrapper. Additionally, power is so smooth and progressive that it’s easy to dial in the right amount. There’s one minor exception in its controllability at launch, as it takes a moment for the torque converter to spin up, and a lazy foot can get the tires to yelp (yours truly and a couple other editors ran into this). The ZF eight-speed automatic shifts seamlessly, whether you’re in automatic or manual mode.

The Kia Stinger GT’s twin-turbo 3.3-liter V6 is also a great engine, but it lacks the character and the finesse of the Charger's V8. While that giant 6.4-liter lets out a hearty roar, the Stinger keeps its mouth tightly shut. Only a low, generic mumble from the intake comes from under the hood. And as we’ve talked about before, the throttle response is sluggish, and it takes a moment for boost to build. Once that boost is unleashed, though, the Stinger surges in a more aggressive way than the velvety Charger. The power hits hard, and throughout the rev range, so despite being down on the numbers front, the Stinger doesn’t really feel much slower than the Charger, in fact, it sometimes feels quicker from low rpm because of its strong turbo torque. Our feeling is born out in the claimed 0-60 mph times. Kia says the Stinger GT will hit 60 mph in 4.7 seconds, while Dodge says the Charger R/T Scat Pack will hit 60 in 4.5 seconds. The new Widebody version is even quicker with a time of 4.3 seconds, due mainly to its extra grip from wider tires.

Then there’s the Stinger’s transmission. It’s an in-house unit from Kia, and the company should be commended for developing a good rear-drive, high-horsepower transmission. As good as it is, it simply doesn’t shift as quickly or smoothly as the ubiquitous and highly-honed ZF gearbox. The Stinger does boast a fuel economy advantage of 19 mpg city, 25 mpg highway and 20 mpg combined versus the Charger’s respective 15/24/18 mpg. That works out to an annual fuel savings of $300, according to the EPA, which doesn't seem like enough to shift favor from the big Dodge.

While the Charger takes the powertrain win, the Stinger ties things up with ride and handling. Again, it’s a close call as Dodge has worked some magic to keep the Charger legitimately competitive, despite its extremely old bones. It corners fairly flat, it has a lot of grip, and the chassis is fairly communicative. But the Stinger feels sharper. Its nose is lighter than the front-heavy Charger, its steering is more precise, and its chassis is more composed on bumpy surfaces. The Stinger continues to shine in terms of ride comfort. The Charger isn’t uncomfortable by any means, but it's bumpier and busier. And the Stinger's smooth ride is accented by its quieter engine, making it my clear choice for long-distance drives. 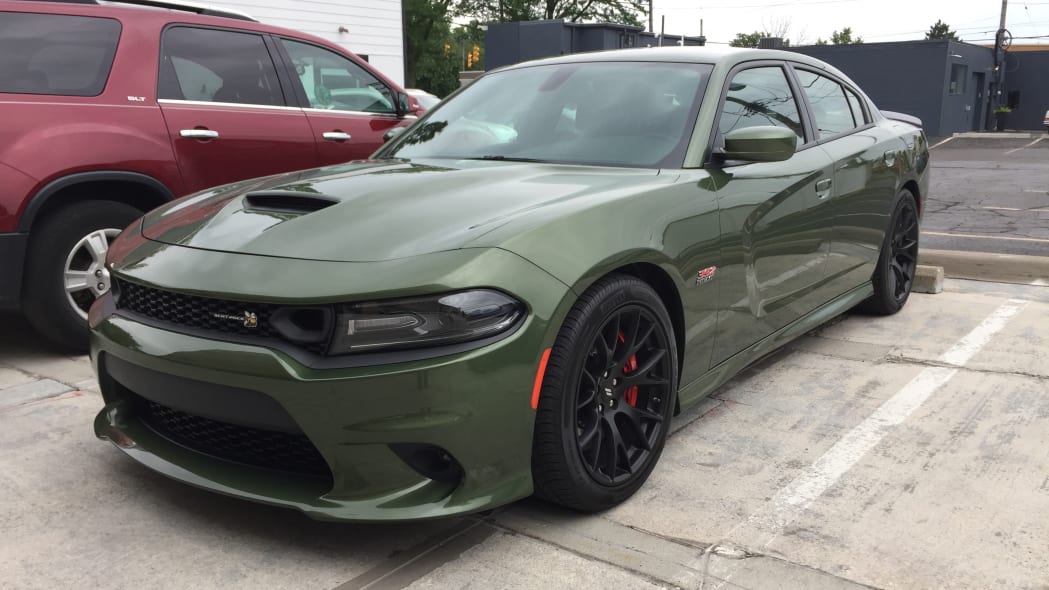 With both big sedans tied dynamically, time to move onto the other key reasons to buy one of the two: the exterior and the interior. From the outside, it's hard to say one is better than the other. I love the Charger’s bulging fenders, gaping grilles and angry scoops. It’s an imposing presence. The Stinger on the other hand is trim and athletic. Its sheetmetal fits close, and it leans into its length and low height. They’re both great in their own ways.

Inside, though, the Stinger is definitely better. Its interior isn’t quite as high-end as the Audis and BMWs it frequently gets compared to, but it’s still attractive with quality plastics, a mixture of colors and textures, and even some real brushed aluminum trim. Our long-termer’s red leather has been a bit divisive, but there’s no question that it stands out. The Charger on the other hand is a wall of awful black plastic. It’s relatively soft to the touch, but the texture is rough and ugly. And it’s everywhere. The dash is tall and thick, too, making it even worse. Add to that lower-quality buttons and knobs, and the Stinger takes a decisive victory. It’s a shame for the Charger, because aside from the low-quality materials, the interior is fairly pleasant. The gauges are attractive with interesting patterns and finishes, and the Uconnect infotainment is bright, sharp, responsive and easy to use. It’s arguably easier to use than Kia’s otherwise useful unit, and certainly more attractive. The R/T Scat Pack’s seats have excellent support from the big bolsters, but our tester was upholstered in cloth. It's nice cloth with houndstooth print and fun Scat Pack logos, but at this price point, it's safe to say most buyers are expecting something from a cow.

When it comes to space for extra passengers and space, the Dodge doesn’t have any real advantages either. It boasts 5 more inches of rear legroom, but it’s not especially noticeable as the Stinger’s rear bench seems plenty roomy. The Charger's high door sills and pitch black plastics make for a cave-like rear passenger experience, too. And its 16.5-cubic-foot trunk is smaller than the 23.3-cubic-foot area under the Kia’s hatch, which boasts extra versatility.

In the end, both these cars are closely matched, and it's hard to blame someone for picking the Charger on the engine alone. But powertrains are only part of the automotive package, and when you take your foot off the Charger's throttle, you start to see its compromises. Do the same in the Stinger, and you realize that Kia sweated the little details in addition to its punchy engine, and that's why it's the one to recommend. 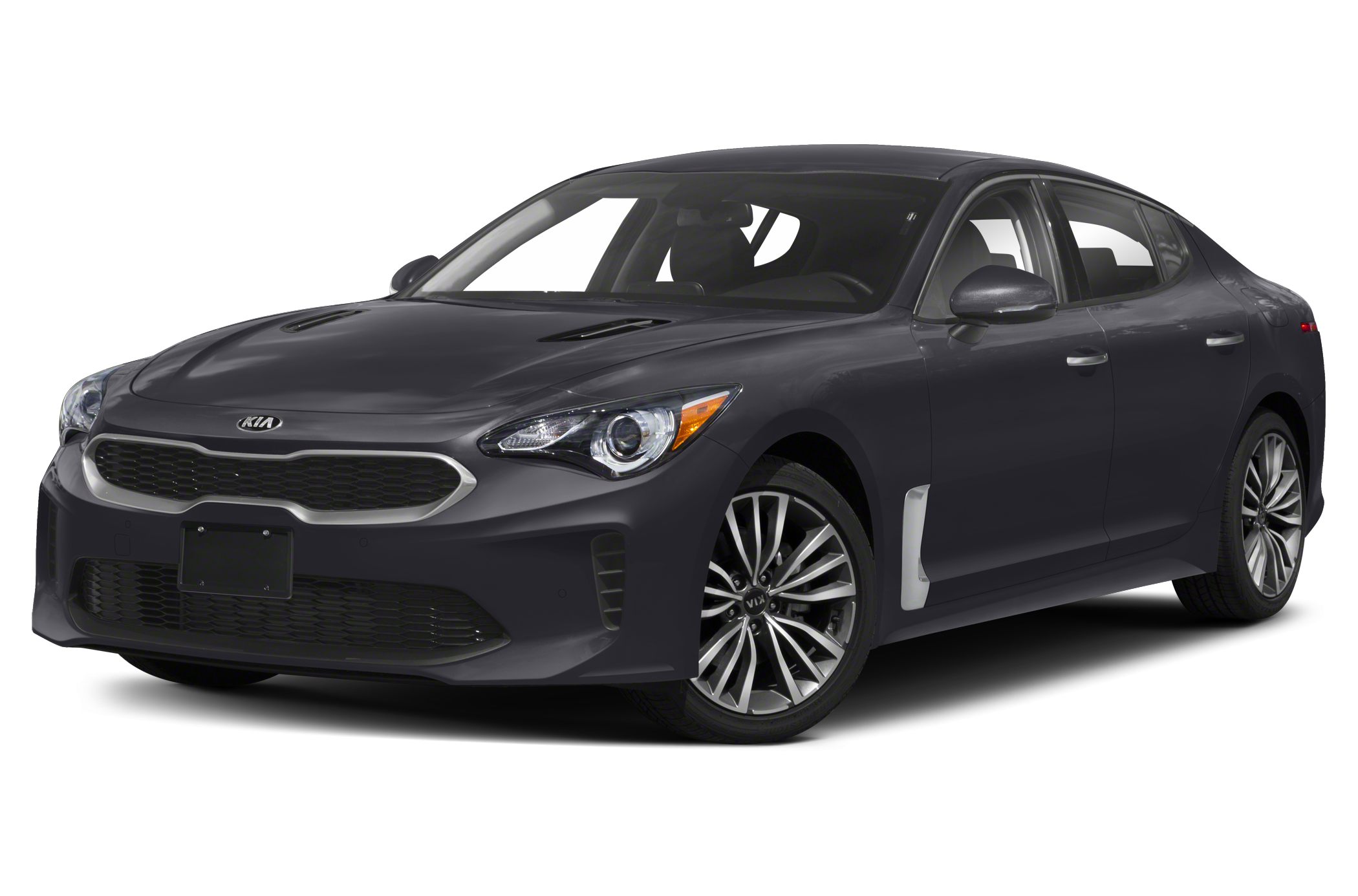