An R/T For The Loud Crowd

View All Specs
2 Reviews
"Scat Pack" is plucked from The Big Book of Dodge Nameplates to describe what is basically the average of the Charger R/T and Charger SRT 392. Unnecessary horsepower always seems to go down better with a dose of heritage.

If you think it's a silly name, just be thankful Dodge didn't call it an S/RT or an R/T-S. In previous years, a similar formulation was known as the SRT8 Super Bee. Going by another name, it's still as sweet and wears the same hurried-looking pollinator on the grille. We do wonder: What has displeased him so, and why does he have wings and wheels?

The packaging is at least fresh. All Chargers get updates for 2015, including improved interiors and a Dart-on-steroids exterior redo. The new lines work especially well on the more aggressive models, including this Scat Pack car. Like the Super Bee before it, the Scat Pack gets the 6.4-liter engine from SRT 392; for 2015 it gets a slight output boost to 485 horsepower and 475 pound-feet of torque, respective increases of 15 and 5. It does without the SRT three-mode suspension and comes with cloth seats (leather is an option) to keep the price down. The Scat Pack also has slightly smaller Brembo front brakes, narrower wheels, and different rubber.

It does, however, cost eight grand less and is just as quick in a straight line. Intriguing.


There is no stealth mode with the Scat Pack. You can't turn off its sound or tone down the ride. A lot of this package is just cost savings compared to the SRT 392, but the upshot is an always-on, entertaining personality. A Chevy SS is about the same money (and available with a manual), but that car looks, sounds, and feels tame by comparison. The thrill of the Scat Pack is that it's fun everywhere, with every prod of the gas, and doesn't need good roads or space to uncork its charms.

Again, this is not a new idea. A new level of polish and a coat of nostalgic details make the best argument yet for a big engine in a simple package. It's the kind of recycling even lovers of thumpy muscle sedans can get behind. 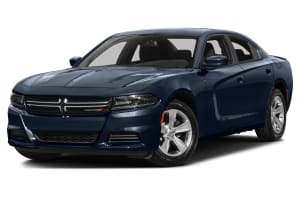