The original is a legend, and Honda's modern version is charming

Long before Honda Civics and CR-Vs dotted American roads, Soichiro Honda was hatching a plan to seduce U.S. consumers with a gotta-have-it ride. "Old man" Honda dreamed of an affordable two-wheeler that could meet a few simple but critical guidelines: produce at least 4 horsepower from a quiet, efficient motor, be rugged enough to handle almost any road, and welcome any and all riders with an ergonomically friendly package. After a research trip to Europe, Soichiro and his team rolled up their sleeves and developed the Honda C100 "Super Cub," which made its way to the United States in 1959.

The scooter launched with an attractive $215 price tag and a novel hook, but it wasn't the first motorized cycle to claim an approachable step-through design. That distinction goes to Vespa, which debuted its first product in 1946. But Honda's offering was uniquely styled and friendlier than the next, a point driven home by 1963's "You Meet the Nicest People on a Honda" ads. The cheery campaign challenged conventional bad boy motorcycle imagery and launched the CA100 Super Cub model in the U.S. as an affordable, approachable model. The rest, as they say, is history: The Super Cub became a massive hit, cementing Honda's presence in the U.S. and going on to become the best-selling vehicle on the planet, moving a staggering 100 million units by 2017.

The U.S. motorcycle market has shifted dramatically since those early days, seeing a resurgence of 600cc-plus bikes and intermittent flirtations with scooters and large displacement "maxi scooters.".The Super Cub, whose last derivative was seen Stateside in 1983, returns this year (on the 60th anniversary of the brand's U.S. presence) to the North American market as an all-new model. Priced at $3,599, the redesigned scooter serves up a few of the original model's features, including a clutchless shift mechanism. 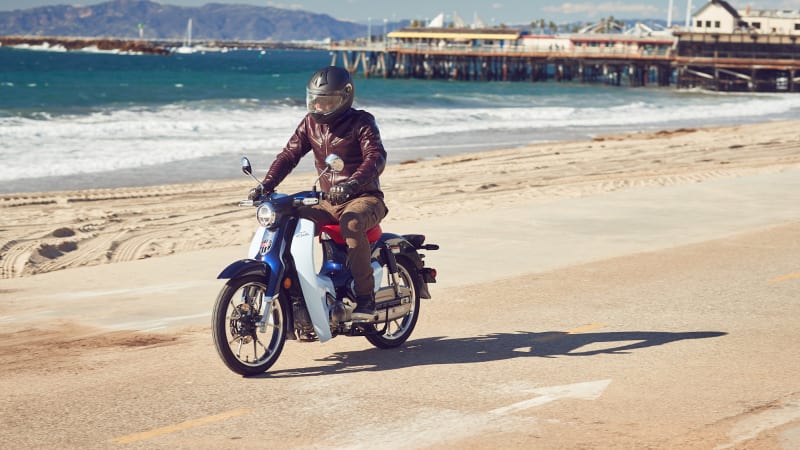 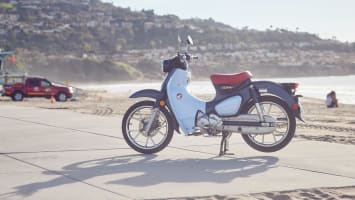 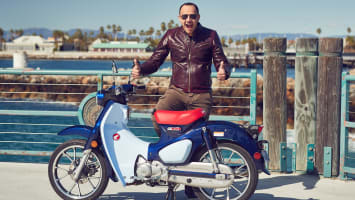 The choice is a deliberate one, as Honda could have just as easily incorporated a fully automatic, twist-and-go setup like those of rivals including the Yamaha Zuma 125 ($3,399), Suzuki Burgman 200 ($4,999), and Vespa Primavera 150 ABS ($5,099). Honda designates the Super Cub as a motorcycle because of its semi-manual gearbox, though most enthusiasts would agree it's more of a scooter than full-fledged motorcycle. The new bike also adheres to the original model's single-seat configuration, as the Super Cub's U.S. version had a two-seater configuration. While its competitors are equipped for double occupancy, the new Super Cub is a strictly solo affair.

Despite its retro looks, the new Super Cub presents a few pleasant technological surprises. For starters, it borrows from the automotive world with its keyless start system. Stash the fob in your jacket, and the Super Cub recognizes your presence, only requiring a turn of a knob and a press of the start button. Since there's no clutch, the tiny engine only needs a quick press of the ignition button on the handgrip to buzz to life. Unlike conventional transmissions, the clutchless design enables one-handed startup while it's in gear, which is handy if you're strapping on your helmet or throwing on a backpack before you ride. The compact instrument cluster offers a simple, legible display of key information, namely an LCD gear position indicator surrounded by an analog speedometer and other bits of key info.

The Super Cub pushes off its center stand easily and feels easy to maneuver at slow speeds. Steering is very light and responsive to inputs, thanks in part to the low claimed wet weight of 240 lbs (for reference, small motorcycles like the Honda CB300R, Kawasaki Ninja 300 ABS, and Yamaha R3 are between 70 lbs and 140 lbs heavier). The engine, which shares the same air-cooled, fuel-injected 125cc single-cylinder engine as found in the Grom, gets a bit buzzy as it revs through first gear. 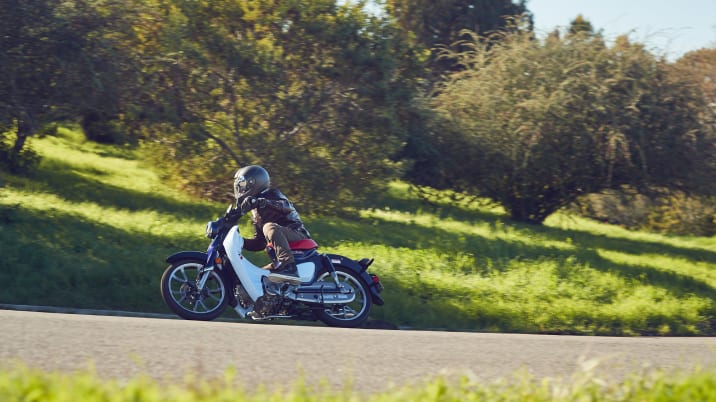 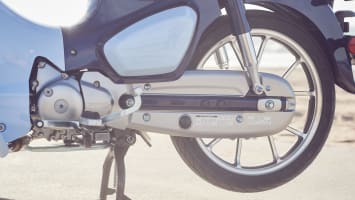 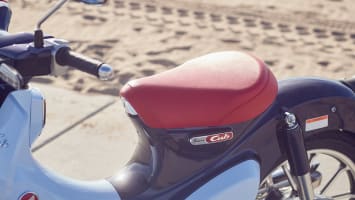 Though there's no tachometer to indicate engine speed, auditory and vibrational cues make it easy to figure out when you've squeezed out the usable power from each gear. Upshifts are triggered with a heel kick of the rear pedal, though experienced riders might need a moment to acclimate to the N-1-2-3-4 shift pattern since most motorcycles are configured with a 1-N-2-3-4-etc sequence. Once you get the hang of shifting straight through the gears, feathering the throttle will help deliver smoother power transfers, especially when downshifting to lower gears.

The Super Cub rolls on 17-inch cast aluminum wheels, a relatively large diameter that eases handling. They're larger than most scooters', and are manufactured using a special cutting technique that enables them to accommodate tubeless tires. While they roll over road imperfections easily, it takes some attention to guide the Super Cub into higher-speed corners because of its relative sensitivity to steering inputs, especially when leaned over.

Stopping power comes from a front ABS disc and rear drum setup. Though it's somewhat difficult to trigger the anti-lock pulse up front via the hand lever, a firm kick of the right foot pedal can instigate rear tire lockup. But that's mostly irrelevant considering the Super Cub's usage model, since most riders are unlikely to be riding it like a sportbike and states require a minimum of 150cc for highway use. But that doesn't mean the Super Cub couldn't handle a freeway jaunt if necessary. Though I don't recommend doing so, I did hop on Interstate 110 near Downtown LA during rush hour while traffic was nearly stopped. The Honda threaded its way deftly through the gridlock far more easily than neighboring motorcycles, and when the slowed cars started speeding up, I wound out the little motor until I saw an indicated 60 mph on the speedo. Don't try this at home, kids. 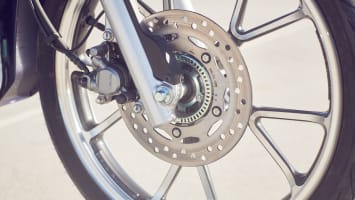 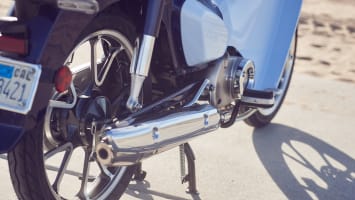 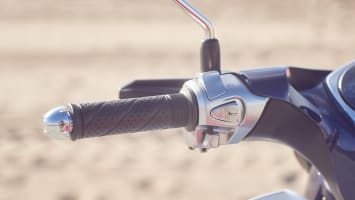 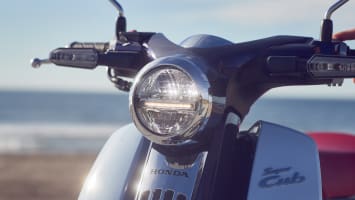 At the end of a long but fun day aboard the 2019 Honda Super Cub, I had covered nearly 70 miles of city riding and still had a quarter tank or so of fuel remaining. Lightweight construction coupled with a small, 100+ mpg engine can do that. But I also experienced unusually pleasant interactions with fellow motorists and passersby, who were going out of their way to flash a smile or wave, exuding so much positive energy you'd think they were conspiring as part of a 1960s-era ad campaign.

Funny thing about those smiles: they're contagious. As much as we try to put vehicles into boxes, poring over their spec sheets and crunching performance numbers, it's a rare but important machine that transcends those measures and goes straight to the heart. As an economical way to get around a city on two wheels, the Super Cub does a remarkable job of becoming more than simply a scooter. Breezy, compact, and easy to ride, its retro touches lend it an approachability that's rarely seen in the two-wheel realm, while its semi-auto gearbox adds a level of involvement that's unusual for the segment. Though it would be nice if it had a second seat for passengers and maybe a 150cc engine to make it freeway legal, the Honda Super Cub still manages to stand out as a singular design statement and an engineering achievement, one whose lovable personality justifies its unique place in the motorized world. 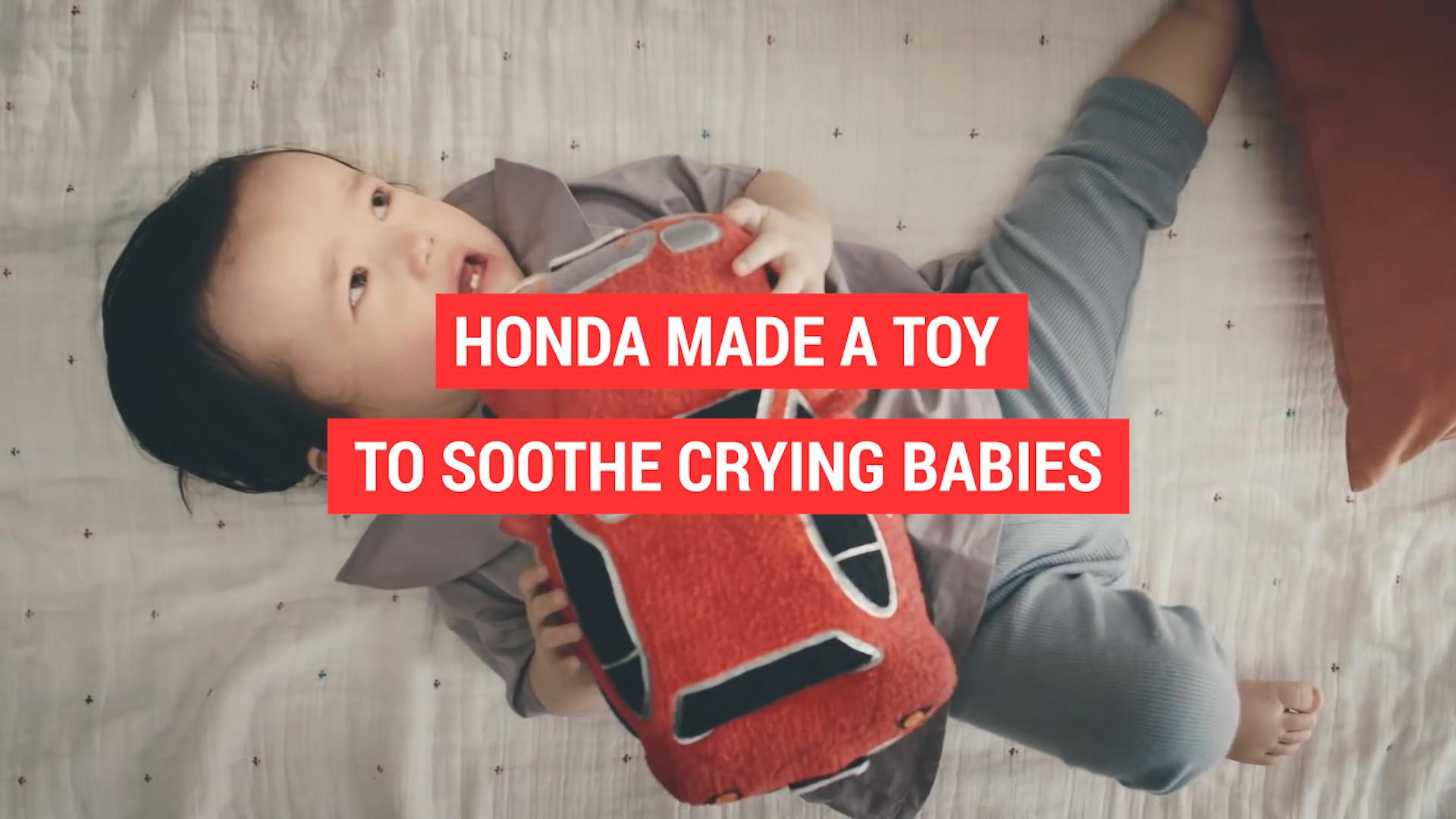