Amazing performance, but what about that styling?

9
View All Specs
Add a Review
The 2019 Honda Civic Type R is the high-performance version of Honda's compact. Based on the Civic hatch, the Type R ditches the turbo 1.5-liter inline-four for a 306 horsepower turbo 2.0-liter engine. Power is sent to the front wheels through a slick 6-speed manual. Standard equipment includes a limited-slip differential, Brembo brakes and adaptive dampers. Competitors include the Volkswagen Golf R and Ford Focus RS.

All that performance adds up, though it does include standard equipment like LED headlights, dual-zone automatic climate control, Apple CarPlay and Android Auto, keyless entry and an upgraded audio system. All in, this car stickered for $35,990.

Editor-in-Chief Greg Migliore: I like driving niche, halo cars. It's crystal clear what they are, what their purpose is and why they exist. There's no ambiguity. Their identity is without question. Such is the case with the Honda Civic Type R. You buy this car because you're an enthusiast and you love Honda Civics. It's that simple.

No one else would pay a starting sticker of nearly 35 grand for a Honda Civic. No one else would want to summon this much performance out of their humble hatch. For those who want these things, nothing else will do.

I'm not one of them. I wouldn't pay this much for a Civic, and I wouldn't enjoy driving it on a daily basis. But, I totally respect the Type R's performance chops. I would love to track it. It's precise and invigorating to drive. The chassis is tight, almost severe, and the steering has definition. I'm a big fan of the Type R's extreme, even polarizing looks. It's overdone, but in this segment, you're not looking for subtle. The pronounced wheel arches, the crazy wing, the black wheels with popping red calipers — all the details work to create the Type R's character. Even the grille is spot-on for this model. In a vacuum I think it's ridiculous, but on the Type R, yeah, you want to look like you're driving a Decepticon.

I had a fairly calm night in this hot Honda. I put a rear-facing car seat in the back, which fit surprisingly fine. The clutch is heavy, but it's not hard to find the right rhythm. The six-speed requires quick, spot-on shifts, but they're easy to execute after a few minutes behind the wheel. The 2.0-liter turbo sounds growls without being comical, and you can't argue with 306 horsepower. It outguns nearly everything in this segment, save the Subaru WRX STI. Nestled into the racing-style seats with a metal plaque to your right indicating the Type R's build number, it's impossible not to feel like you're driving something special. It's not my flavor of brandy exactly, but I enjoy a good drink of Type R as much as the next guy.

Associate Editor Reese Counts: I'm not exaggerating when I say this is the best front-wheel drive car I've ever driven. Honda has worked some magic, tuning out some of the biggest drawbacks to front-wheel drive cars — torque steer and understeer. Drop the clutch and lay on the gas and the car just goes, no pulling or yanking or anything of the like, a surprise given the turbo 2.0-liter's 295 pound-feet of torque. The steering is firm and talkative. The suspension is firm (partially the fault of the 20-inch wheels), but it's no worse than the competition. The shifter is short and precise. Insert chefskiss.gif.

I dig the interior, too. In terms of packaging, I think the Civic in general has the best interior in the class. There are tons of small cubbies and shelves. Everything looks and feels nice, too. The Type R adds some rad red seats and seatbelts. It's just a really pleasant place to be.

It's a shame it has to look like this. 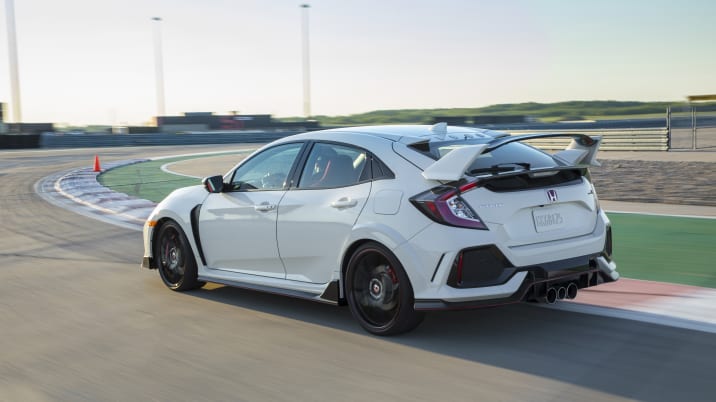 Associate Editor Joel Stocksdale: Yep, this thing is as good as I remember it being. The engine pulls so hard, all the way to redline. The clutch is easy to use and has good feel. The brakes are strong and firm.

Of all the great things about the Civic Type R, I find the handling, particularly the steering, to be the most impressive. It's so astonishingly precise and responsive when it comes to your inputs. I would compare it to driving a laser beam, but that would seem too clumsy. The chassis is light and neutral, making it the perfect complement to the amazing steering wheel. Shockingly, it even has a pretty comfortable ride for such a serious machine.

Unlike Greg, though, I don't think the price is that bad. Sure, it's a lot of money for a Civic, but it's also really competitive with the other hyper hatches. It's roughly $5,000 less than the Focus RS, and Golf R. Plus, you can see where the money went you take it for a drive, so if I had the money, I would seriously consider one.

Assistant Editor Zac Palmer: I drove this car in sub-30 degree weather with wet roads and summer tires. Yes, those are the opposite of ideal conditions when you're trying to put over 300 horsepower down to the front wheels, but the Type R was still a riot to drive.

Most of the time, commuting, accelerating from stop lights etc, the Type R feels like a front-wheel drive car. Wheel spin takes all the fun out of first and part of second gear in the cold and wet before third finally hooks. Start diving through corners and the Type R goes through a transformation. I didn't care that it was front-wheel drive anymore. This Civic accelerates through and out of corners without any of the traditional front-wheel drive nags. The limited-slip differential, torque vectoring and suspension geometry designed to mitigate torque steer (goal accomplished) all work harmoniously together to make the Type R drive like it's on rails. Feel like carrying more speed partway through a corner? Just apply more throttle and the Type R naturally tightens your line without upsetting any part of the car. It finds grip you didn't know was there, then shoots you onto the next challenge. Going around corners is addicting in this car — really, I didn't want to stop, even though snow was falling from the sky.

I love the power from this turbocharged VTEC engine, but it lacks soul and sound. You don't have to wait long for the turbo to spool up, and it pulls hard all the way to redline. There just isn't any drama. That's what we're dealing with in the turbo era. No hilarious VTEC crossovers or high rpm shenanigans are to be found here. It's saddening, but I'm also OK with it. The handling and downright joy of tossing this Honda around make it the best front-wheel drive car I've ever driven. 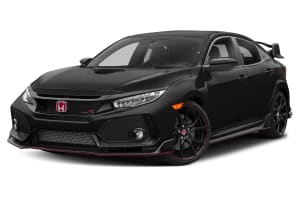