Our bet is the larger, next-gen CX-3 crossover

Jonathon Ramsey
Mazda waited until the lights were out to tease the tidy rear end of a brand new crossover. The Japanese automaker didn't say much about the model that will debut at the Geneva Motor Show next month, only calling it "a brand-new addition to the Mazda lineup," and "the second model in new-generation lineup." We're going to put our chips down on this being the next CX-3 crossover, which has been predicted to arrive by 2020. If that's so, we can expect a larger model than the one currently on sale. The present, first-gen CX-3 rides on the Mazda2 platform. The coming CX-3 will use the Skyactiv Vehicle Architecture supporting the new Mazda3, growing out of the subcompact class into the compact segment. According to one report last year, the extra girth is a play for better sales in the U.S. market. In 2017, Mazda sold more CX-3s in Australia than in the U.S.

The stronger, stiffer platform will introduce Mazda3's delights such as the human-centric interior ergonomics, and hopefully the same driving dynamics that we called "the life of the compact sedan party" in our Mazda3 First Drive. Yes, that's all but certain to mean a torsion beam rear suspension, which was said to have been done for NVH reasons after Mazda said it "got a lot of complaints from the media" over the multi-link rear. The engine lineup should mirror the Mazda3 in the U.S., being the naturally aspirated 2.5-liter four-cylinder at launch, followed by the Skyactiv-X.

We can probably expect more teasers before Geneva press days kick off on March 5. 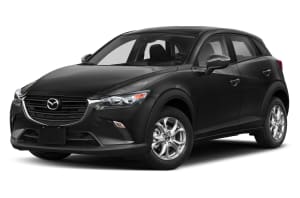