The life of the compact sedan party

Add a Review
Fun to drive. The phrase gets blasted from seemingly every car commercial, magazine ad, and influencer account – overused that it has lost all meaning. So when Mazda, a small firm that actually does make cars that are fun to drive, talks about their most compelling trait it gets lost in the cacophony of ad spends.

However, we're here to tell you that yes, while it's difficult to quantify, some cars are objectively more fun to drive than others, and the all-new 2019 Mazda3 is — and this is a very technical term — a freakin' blast. At Mazda's behest, we took a 2019 sedan up Angeles Crest Highway just outside of L.A. With plenty of yellow signs, tight sequences of banked curves and elevation changes, it's the platonic ideal of those serpentine mountain roads you see in car commercials.

The instant the Mazda3 reaches the windy roads, it glides in like an otter diving into the sea. Lively and graceful, it dances along a ribbon of asphalt more naturally than any compact sedan we've driven since the advent of drive-by-wire. The steering is not only direct and true, but possesses an extraordinary ability to maintain trajectory. From the moment you turn in, you never need to make adjustments to the steering wheel until the front tires are straight again. The car goes exactly where you intend, always. 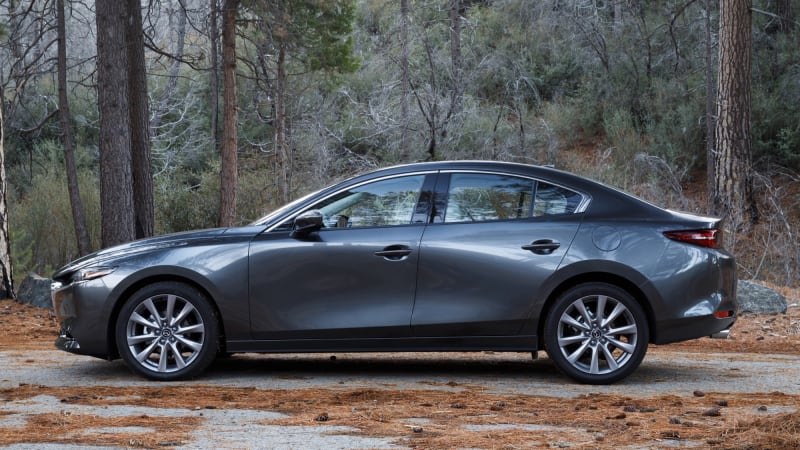 That's not hyperbole, but an amazing feat of engineering. In nearly every other vehicle, even those that purport to be sports cars, unless you're incredibly familiar with the machine and know the road like the back of your hand, minor mid-corner corrections are an inevitability. With the 3, you get it right on the first try. Now imagine you're on strip of canyon pavement with lots of short switchbacks in varying radii coming up fast, one right after another. The 3 links them all together with pure ease, and soon you're developing a rhythm through the curves. While other cars charge, the Mazda flows.

The car's poise is particularly evident as momentum shifts from one direction to another, what Mazda chassis engineer Dave Coleman termed "transience." In most cars passengers are tossed around the cabin like mannequins, but the 3 cuts out the turbulence, its body engineered to move in a smooth undulation. At the midpoint of the transition, there's even a moment of weightlessness before the car tucks into the next turn and the seat seems to scoop you up and carry you onward.

You don't have to be Yoshimi Katayama to finesse this Mazda, and some might think that means it's somehow lesser than a hardcore sports car. Quite the contrary. It's actually much more difficult to engineer a car that does what the Mazda3 does because they're not just throwing horsepower and grip at it to meet benchmarks. Perhaps the best example of this philosophy was illustrated by a piece of Japanese exercise equipment. 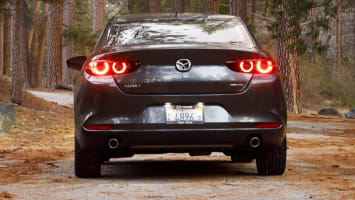 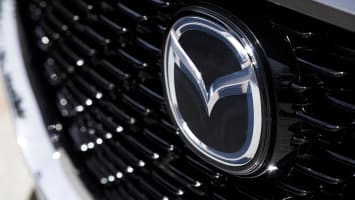 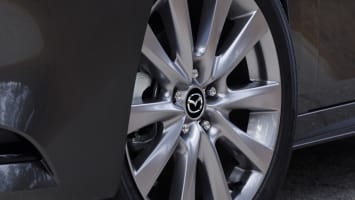 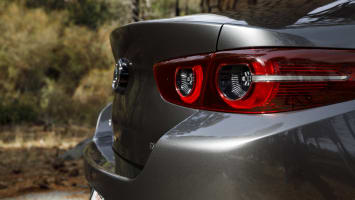 To demonstrate their human-centric doctrine, Mazda had us sit in two cars, a current-generation 3 and the 2019 edition. Both had their passenger seats removed, and in their place was bolted a flat seating cushion mounted atop a single spring. With no armrests or seatbacks to stabilize yourself with, simply sitting upright took substantial balance and constant working of your torso, thigh and back muscles. Then a Mazda engineer drove us around in each car at speeds of no more than 5 mph to demonstrate just how much smoother the new 3 was compared to the old one, how much harder you had to work to hold yourself up in the old car against each input of the driver.

"This was a conscious decision by Mazda," Director of R&D Engineering Kelvin Hiraishi told us. "Because if you can't enjoy the drive over the shouts of passengers to take it easy, what's the point of the car?"

Of course, there's also the matter of the 3's rear suspension, and the replacement of a multi-link with that of a torsion beam for 2019. On paper it looks like a regression, but in the real world, the handling doesn't seem to be affected one iota. "If you believe Mazda is truly committed to our philosophy of jinba ittai [horse and rider as one]," Hiraishi continued, "You know that we'd never sacrifice our dynamics. It's not who we are." 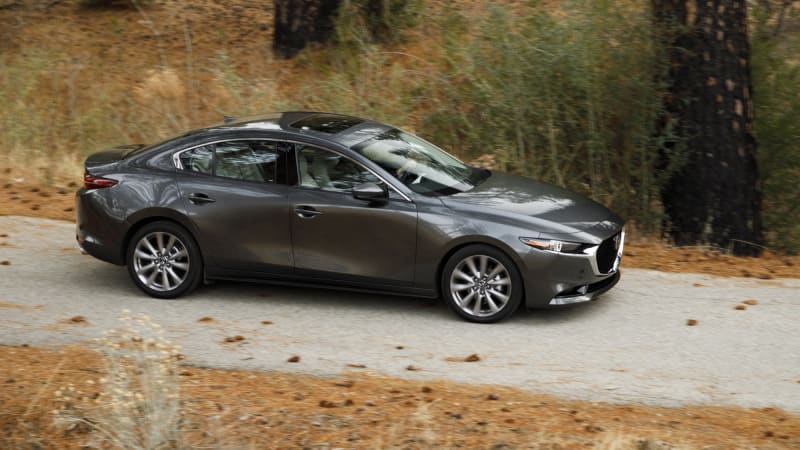 "With the torsion beam, we were able to increase lateral rigidity by a good margin," Hiraishi added, "There are fewer arms and bushings deflecting in various directions as the car turns." Indeed, if it works well, there's no reason to get hung up on what's underneath.

In fact, the handling almost overshadows the 3's other aspects, which are also very good. The sole powertrain is a naturally aspirated version of Mazda's 2.5-liter SkyActiv engine, the same one found in the CX-5, mated to a 6-speed automatic. That's for the sedan, which is the only version available to drive at this point (the hatchback will offer a manual option on its highest trim level).

We've found this engine, which produces 186-horsepower and 186 pound-foot of torque and features cylinder deactivation, impressive in other Mazdas, and it continues to serve as a superb powerplant in the 3. Mazda still stubbornly refuses to add more than 6 gears to the transmission, but as Coleman reasons, "the fewer the gears, the less it will hunt." Activating Sport Mode holds the gears longer for peppy acceleration — and it's smart enough that, in a rare turn of events, we didn't find ourselves aching for manual — but doesn't change the steering or throttle response, as it does in many cars. "That," Coleman explained with a wry grin, "is because we've already found the ideal setting." 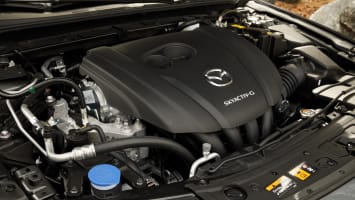 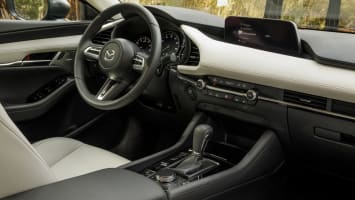 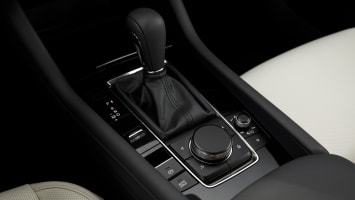 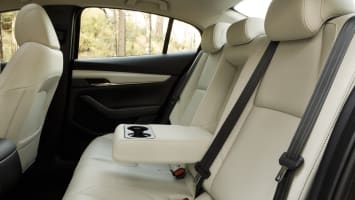 The theme of ideal settings continues in the Mazda's cabin. Completely redesigned, it's a big departure from previous Mazdas. And there's one detail that differs significantly from most other cars on the market for that matter: The 8.8-inch "infotainment" display is no longer a touchscreen.

Mazda engineers have acknowledged what many other companies don't: Hunting for virtual buttons is a dangerous and unnecessary distraction. Instead, a command dial on the center console navigates the menu, while the screen itself now angles toward the driver and moves closer to the base of the windshield.

That not only keeps the display closer to the driver's field of vision, but also requires less time to refocus the eyes when directing attention from something distant to something inside the cabin. Likewise, an available heads-up display is projected at a virtual distance of 2.3 meters ahead, which HMI engineer Matthew Valbuena says is the ideal span to minimize eyeball refocusing time.

We found the command dial extremely intuitive, operable by nothing but feel. The menus have helpfully been redesigned to include a visual shorthand as well — if you're trying to change a setting in the instrument cluster, for instance, an image of the speedometer appears next to the menu text for easy identification. The cupholders have been relocated to fore of the shifter so while operating the command dial your forearm has more support from a larger center armrest cushion, which doubles as the lid to a large storage compartment. Next to the command dial sits a smaller knob for volume control, which also moves like a joystick for track selection or scanning. The stereo sounds clear and crisp with no bass distortion on the 6-speaker base system, and even better with the optional Bose 10-speaker. 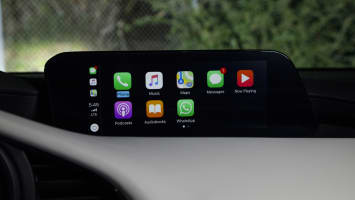 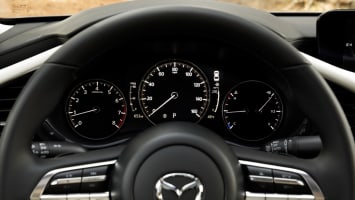 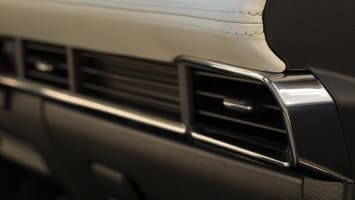 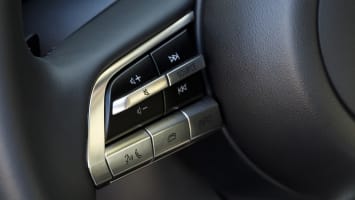 Furthermore, Mazda has worked hard to maintain a sense of consistency throughout the cabin. Every dial and knob turns with the same click. Every button, whether on the steering wheel, door armrest, or center console has an identical detent feel. All interior lighting emits the same hue of white.

It's all part of a grander mission to move upscale, and the rest of the cabin does not disappoint. Deluxe materials clothe most surfaces, save the hard plasticky-ness of the steering wheel. The seats provide excellent support without restrictive bolstering, keeping us in place on those twisty roads without restricting torso or arm movement, and add thigh support to the driver's side. Mazda doesn't skimp on the safety tech, either, adding front cross-traffic alerts for 2019. A traffic jam assist can either lane trace or follow the vehicle ahead below 40 mph. The cabin is supremely quiet for a C-segment offering as well.

The base 3 Sedan starts at $21,895, and the only thing that lands anywhere in the same zip code in terms of driving experience is the Honda Civic. However, the Civic Sport Sedan starts at $21,150 and comes with just 158 horsepower. The 3 is more closely aligned with the Civic Si, but then you're already spending $24,300 at a minimum and it looks like it was designed by a robot. 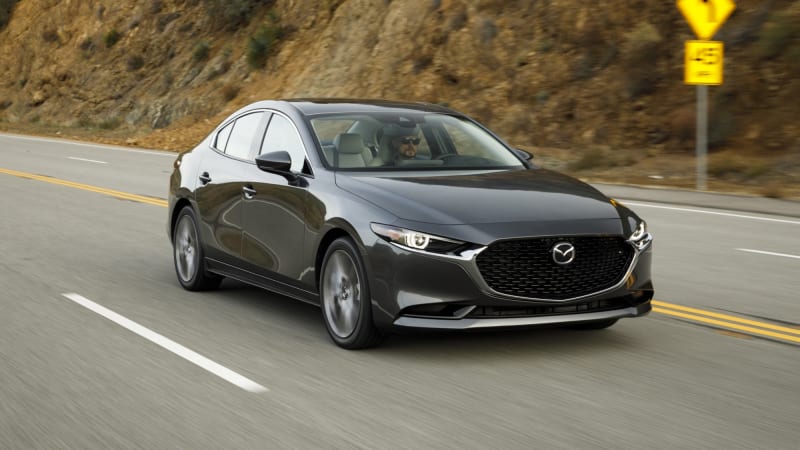 The Mazda, on the other hand, is stunning. If it wore a European badge, they could probably charge $10,000 more on each model. We say that because that's exactly what Audi does with the A3, and the Mazda is every bit its equal. But see, there we go comparing figures and specs again.

At the end of the day, the Mazda might not win on every metric, but it doesn't matter. As a driver, you owe it to yourself to put it on your list. Just make sure your salesperson lets you take it beyond a few city blocks (Mazda still has a ways to go in dealership training), and thoughts about cubic feet will melt away immediately.

We felt our mountain frolic too short and wanted more than anything to drive it more. Few cars in this class and price range can generate that kind of emotion – or any kind of emotion. If you're going to spend time in your car, why not make it a source of joy for both you and your passengers? It's the only way we'll truly understand the meaning of "fun to drive" again. 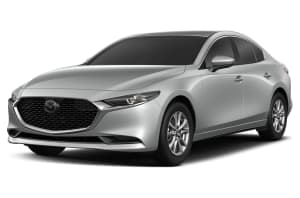 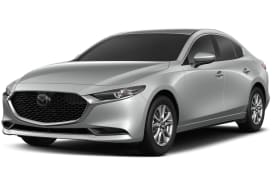 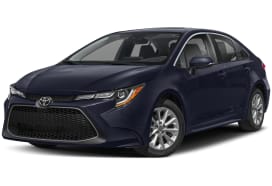