Tony Markovich
Any time there is a highly anticipated limited-edition performance car, a collectible is instantly born when the first example rolls of the assembly line. For fanatics and historians, it's not enough just to have one, it has to be the first one ever created. The two biggest stars of the recent 2019 North American International Auto Show once again proved the case at the auction house over the weekend. After the first 2020 Supra built brought in more than $2 million in cash, the first 2020 Ford Mustang Shelby GT500 earned $1.1 million, all of which goes to charity.

At the Barrett-Jackson Collector Car Auction in Scottsdale, Arizona, numerous lots were slated to give the proceeds of the sales to good causes. A Ford GT earned $2.5 million for the United Way for Southeastern Michigan. The aforementioned Supra is sending $2.1 million to the American Heart Association and the Bob Woodruff Foundation. And a brand-new Shelby GT500 hit $1.1 million on the auction block to aid in research for child diabetes. 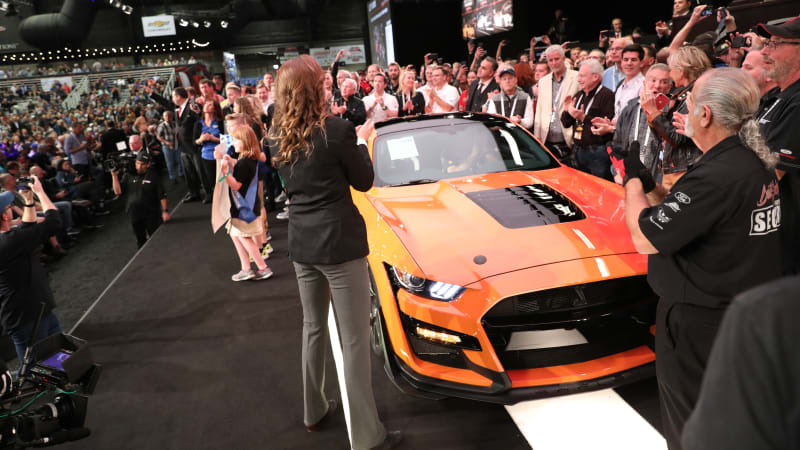 The GT500 VIN 001 caught the eye of chairman and CEO of Barrett-Jackson Craig Jackson. His bid will go to the Juvenile Diabetes Research Foundation. Although the car that drove across the stage was orange, Ford indicates Jackson will be able to choose the colors and options of his car.

The timing worked in favor of the Shelby, as the new GT500 was just announced at the Detroit Auto Show with a wave of hype backing it up. Although details were broad, the powerhouse muscle car will get more than 700 horsepower from a supercharged 5.2-liter V8 and has a 7,500 rpm redline. The Shelby GT500 will go on sale fall 2019 for a bit less money than $1.1 million.