Automotive News Canada pointed its divination stick at Chrysler as part of its Future Product Pipeline series. The publication dug up two revelations, one being that the Chrysler 300 has two more years to live, ending production come 2020. The article said nothing about the 300's platform twin, the Dodge Charger. The death of the 300 would leave the Pentastar brand with just one offering, the Pacifica minivan. AN Canada's other revelation was Chrysler would allay that fate by putting the "six-passenger multi-purpose" Portal concept into production for 2020.

The automaker that wants to be known for its people haulers introduced the Portal concept at the 2017 Consumer Electronics Show. The big bang at the time was the Portal having been designed by millennials in Chrysler's design department, specifically for millennial buyers. Feature bait for the confounding demographic included facial and voice recognition so the Portal knew who was in the car and could tailor the driving environment and cockpit to their tastes; a panoramic dashboard; a configurable interior so the owner can create space where needed, up front or in the cargo area; vehicle-to-vehicle and vehicle-to-infrastructure tech; upgradeable Level 3 autonomy; a retractable aviation-like steering wheel; and customizable light signatures.

We didn't get many specs on the show car, but the all-electric powertain employed a 100-kWh lithium-ion battery, had a range of at least 250 miles, and could restore 150 of those miles in 20 minutes hooked up to a DC fast charger. Reasonable specs for a real vehicle.

It wouldn't be an outrageous move for Chrysler to create a production version of the Portal. When the concept came to the 2018 Detroit Auto Show, former Fiat Chrysler CEO Sergio Marchionne told media he intended to roll out the "fifth generation" of family cars — the next evolution of the wagon-minivan-SUV-crossover progression — and he expected the Portal or something similar to make production at some point. The Detroit News predicted we'd get a Portal sometime after 2018. Tim Kuniskis, then head of FCA passenger cars in North America, said the company viewed the Portal as that fifth-gen product and "the future of family transportation."

On top of that, the designers based the front-wheel-drive Portal on the Pacifica's platform, and Marchionne was vocal in his desire for another retail product on that architecture. He had said, "I need another minivan. It's going to be in line with the Pacifica architecture," when talking about the demise of the Dodge Caravan. Also, he said, the Windsor, Ontario, plant that builds the Pacifica and Caravan was a "natural place" to assemble the Portal. One final, potential clue: The head of a Canadian union at the Brampton plant that builds the 300 said it's already understood that the 300 will be replaced by a minivan, but he didn't have any more info than that.

The Portal was apparently designed with an eye on showrooms, because Marchionne declared the automaker could build it in two years. That would be 2020, which is exactly when AN predicts the start of production, and would mean Chrysler had practically made up its mind about the Portal when the concept hit the stage.

Assuming all this transpires, we don't expect to see French sliding doors with integrated B-pillars, carbon fiber beams, a recessing yoke for the driver, and perhaps not even the EV powertrain. When the Portal debuted at CES, we wrote, "[Is] this a preview of a future production car? We think yes, but in very, very vague terms. As in, something with this basic shape and style could be in the pipeline." We'd love to get the seating design and dashboard in real life, though. 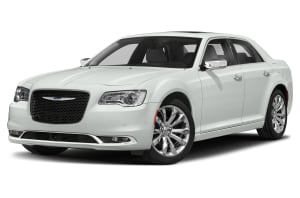