"Created by millennials for millennials." That's how Chrysler describes its new Portal Concept, a fully electric minivan that's set to debut later today at CES in Las Vegas. Reading between the lines, apparently that means millennials want a one-box van with lots of glass and LED lighting elements... and that FCA is talking to the same millennials as Mercedes did back in 2015.

From the few early images of the vehicle released ahead of its official debut, Chrysler's electric van looks like it could have come straight off a Syd Mead drawing. The Portal Concept rides on a 118.2-inch wheelbase, which makes it a little smaller than the Pacifica. There's just enough reality in its design that we can't completely dismiss its viability as an actual vehicle, but all of its disparate design ideas make the Portal look like an overwrought vision of a future that will probably never happen. That said, we'll reserve final judgment until we see it in person at CES. 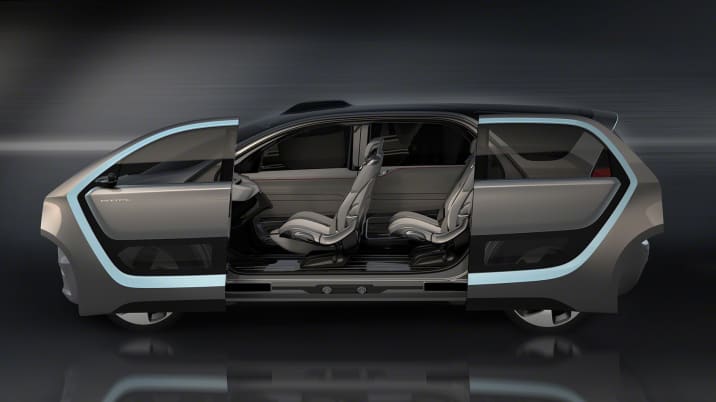 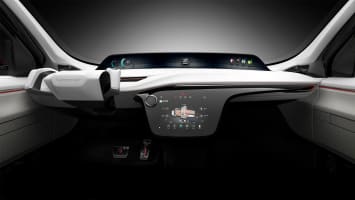 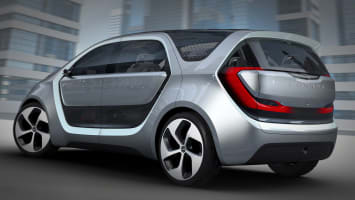 The Portal Concept gets intriguing once its massive double-sliding doors open up. There's a minimalist dash with a long, slender LCD at the top and another, more conventional touchscreen right in the center. Apparently, the screens can be repositioned as needed. There are 10 docking stations inside to charge and hold smartphones or tablets. FCA worked with Panasonic to develop the Portal's user experience, and the automaker hints that the supplier could become a long-term partner.

Chrysler calls the interior of its Portal Concept a "third space," the other two being home and work. All the seats mount to rails that allow them to move fore and aft, fold flat, or be removed completely. The flat floor sits above a lithium ion battery pack rated at 100 kWh. That's enough capacity to allow a driving range of more than 250 miles. A 350-kW fast charger can replenish the pack to allow a 150-mile range in less than 20 minutes. A single electric motor powers the front wheels.

As befitting a vehicle unveiled at CES, Chrysler says the Portal is capable of SAE Level Three autonomous driving, which means the occupants can turn driving duties over to the vehicle under certain conditions on the highway. As self-driving technology advances, Chrysler says the Portal could be upgraded. Facial recognition and voice biometric technologies allow the Portal to recognize individual users so it can tailor the driving environment to their needs and wishes. An internal wireless network allows interior occupants to share music, images, video, or whatever other bits of data with one another, 'turning road trips into social memories,' as Chrysler puts it.

We're sure there's a lot more about the Portal Concept worth talking about. Stay tuned for more as we descend upon Vegas for our live coverage of CES.