BMW re-applies for M7 trademark — does that mean one's in the works?

BMW re-applied to trademark "M7" this month, which might mean something, or might mean nothing. After many years of batting away requests for a BMW M7, the carmaker applied for the trademark in September 2011, getting approval from the U.S. Patent and Trademark Office in April 2012. Instead of renewing the trademark before it lapsed this April 28, BMW waited three days and re-filed for the name on May 1. Now the automaker will need to go through the approval process again.

The question is whether this is BMW simply trying to protect intellectual property a clerical error, which is possible since BMW applied for the M7 mark in 2016 and was refused. Or does this mean BMW has something in mind for retail? The first filing in 2011 included a host of other trademark requests for BMW and Rolls-Royce, including 2 Series, X2, i3, E8, Gran Coupe, M440, M10, Corniche, and Dawn. Some of those names, like Gran Coupe, E8, and M10 have expired. Others, like i7 and M7, have been kept current. Since that 2011 application, in 2013 former M boss Albert Biermann — now of the Hyundai N Performance division — said he wanted to do an M7, and in 2015 spy photographers snapped a 7 Series on M5 wheels with enormous cross-drilled brakes, testing alongside an M5 and an X6 M.

Officially, BMW continues to deny the need for an M7 when asked. In 2014, the head of product planning told Motor Trend, "We feel really good with what we've got with Alpina," referring to the Alpina B7 and its twin-turbo 4.4-liter V8 with 591 horsepower and 590 pound-feet of torque. In early 2017, M boss Frank van Meel told CarBuzz that the M760i, the M Performance model with a 6.6-liter V12 working up 601 hp and 590 lb-ft, filled the role of an ultimate 7 Series. Only those inside BMW know why the carmaker won't build an M7. But everyone outside BMW knows B7 and M Performance are not the same as M. Perhaps this latest trademark filing will — eventually — make something of that fact. 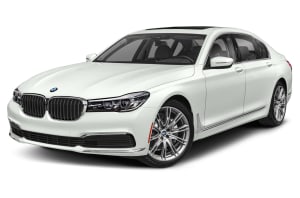