While its long-term future remains uncertain, Ford signaled that it isn't giving up yet on its best-selling car when it unveiled the 2019 Fusion on Tuesday. But the refreshed midsize sedan, along with the 2018 EcoSport compact crossover before it, also illustrate the first attempts by the company to limit complexity by drastically lowering the number of buildable configurations.

When it hits showrooms in late summer, the 2019 Fusion will be offered in 36 available configurations. That's down from nearly 2,000 for the 2018 model year and a number that once reached an astonishing 35,000 possible configurations. Likewise, the EcoSport debuted for 2018 in the United States with 46 configuration options. 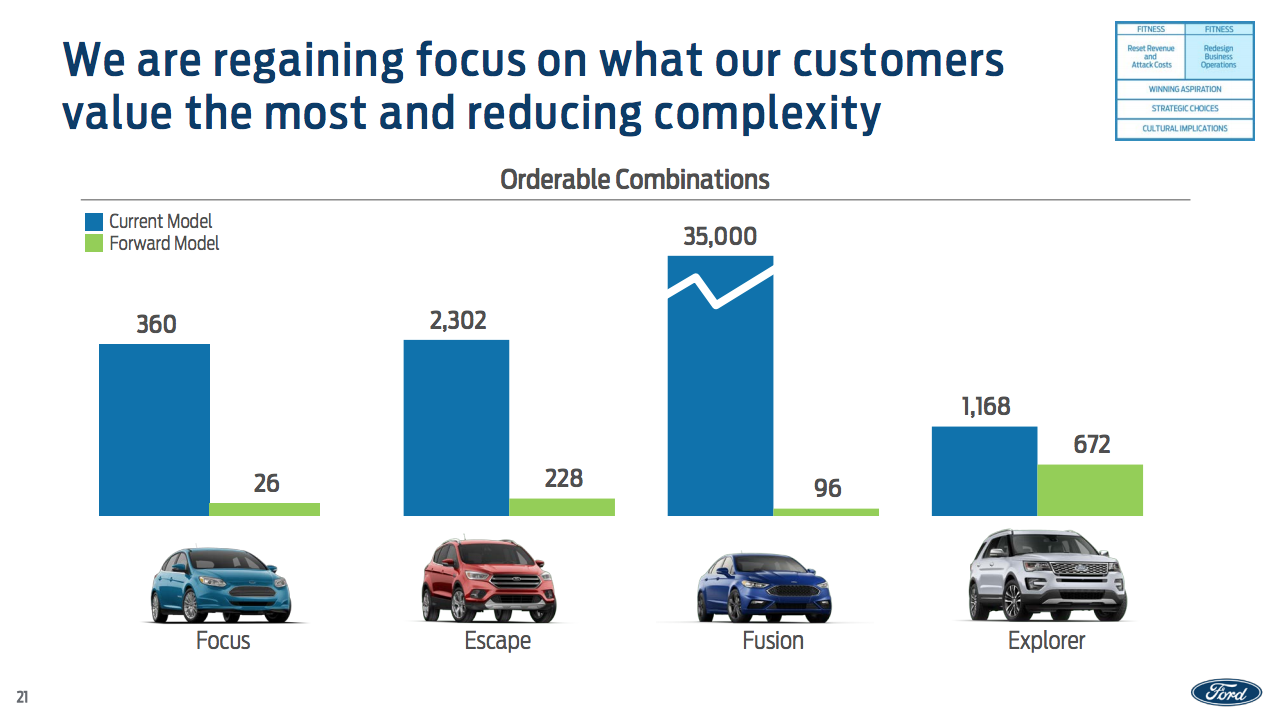 It's part of CEO Jim Hackett's emphasis on "operational fitness," which he outlined back in October alongside plans to streamline its overall lineup, cut costs and shift capital from cars to more profitable trucks and SUVs. Though it will technically limit choices, Ford figures the changes will result in improved customer experience, lower manufacturing costs and better build quality. Jason Mase, a car marketing manager for Ford, says the high number of available options is problematic for many dealers, especially in smaller markets. "The odds are pretty good you're not going to have the exact one somebody spec'ed out," he said.

Take the high-volume Fusion SE as an example. It previously was offered with three different gas engines, front- or all-wheel drive, with or without the Sync3 touchscreen, leather or cloth interior, and around 10 options. For 2019, the 1.5-liter EcoBoost four-cylinder is now standard with a 2.0-liter AWD option. Sync3 is now standard, whiles options have been reduced to four, including Ford Co-Pilot360 Assist, which adds to the standard safety-tech package integrated navigation, adaptive cruise control with stop and go, and SiriusXM Traffic and Travel Link.

Ford says it's mining various sources to decide which options to keep and which to jettison. It evaluates trends and take rates from its own retail website to see what customers are most interested in, and it looks at data showing how long certain models are sitting unsold on dealer lots and which models dealers are most commonly ordering.

There's also a business case to reducing complexity. "If you're building fewer versions of something ... there should be savings on the types of parts you're buying," Mase said. "You're building in scale. Build quality improves too."

Ford plans to continue following the data-driven strategy with all of its models, but Mase said the target number won't be the same for every vehicle. Its biggest challenge may well be in taming the number of options for its top-selling F-Series pickups, which come in different cabs, boxes, engines, drivelines, series levels and a multitude of options.