This week at CES in Las Vegas, international electronics and engineering company Bosch showed off a connectivity suite of technologies for motorcycles. It starts with the connectivity control unit, which links the motorcycle's onboard brain to the outside world, and finishes with the integrated connectivity cluster, which communicates with the rider via the bike's digital dashboard. In between is an interface called mySPIN that mirrors the user's smartphone – whether it runs iOS, Android, or Windows – and any other Bluetooth or wifi-enabled devices the rider wants to use.

In addition to mirroring applications like navigation and phone services, Bosch's connected motorcycle tech keeps track of performance metrics like lean angles and cornering speeds. Perhaps more important are the safety systems – eCall contacts emergency services in accident scenarios, bCall helps you get a broken bike repaired, and iCall connects the user with roadside assistance services. And, of course, Bosch is already a leading supplier of ABS, traction control, and stability control for motorcycles. 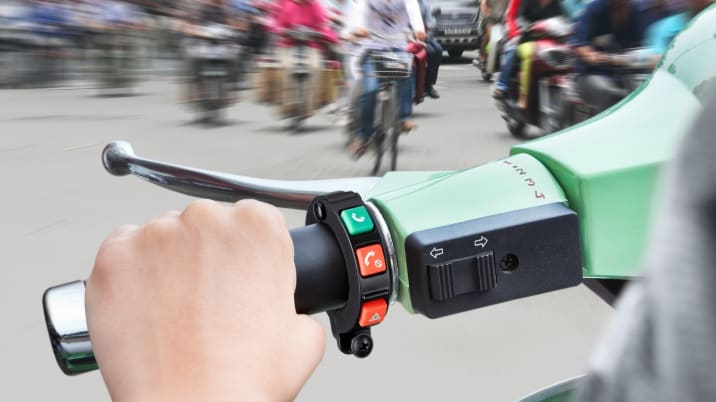 KTM will be the first manufacturer to use this connected motorcycle technology from Bosch, but some features will be headed to emerging markets, too. The image above shows dedicated buttons for phone use on what looks to be a Bajaj Vespa clone.

All of these two-wheeled technologies are impressive. But are they needed? Or, perhaps more appropriately, are they wanted? Two of Autoblog's motorcycle-riding staff members sat down for a debate on the merits of all this newfangled technology, and their thoughts have been distilled, point/counterpoint-style, below.

To Farkle or Not To Farkle

If you follow the adventure touring motorcycling segment, you've probably heard of the term "farkle." Basically, adventurists have found a need to add lots of bits, baubles, and gizmos to their two-wheeled mountain goats because manufacturers haven't yet offered them as factory options. Some of these add-ons are practical items, like additional lighting and luggage racks. Others are higher-tech, like navigation and on-bike video cameras.

Let's not pretend, though, that farkling is a completely new undertaking. Well before smartphones and navigation, I'd laminate directions and maps and tape them to the gas tank. I usually pulled over to consult my map – but not always – mostly because it's very distracting to look down at a piece of paper with a hundred little roads and names on it. It's not nearly as distracting to follow a line on an LCD screen that's directly in your line of sight.

I decided anti-lock brakes were a potential lifesaver on the road around the time that I locked up the front wheel after an inattentive minivan driver eased out into my path from a fast food drive-thru. I still love old, simple motorcycles. "Stone axe," as David Boldt puts it in his counterpoint below. But I recognize that modern bikes are safer and more reliable on a daily basis. And we have to remember that motorcycles aren't just an American thing – scooters and small-bore motorcycles are used all over the world as daily transportation, and those riders deserve to choose whether they want tech, too.

Will things like on-bike audio or simple turn-by-turn navigation systems make motorcycles less safe? No, I don't think so. And if you do, you're certainly free to ignore them. To farkle or not to farkle is no longer the question, it's the reality. But, like so many technologies that infiltrate into our daily routines, connected motorcycles like those pioneered by Bosch and KTM as defined above, still have an 'off' switch. And if all else fails, you're still free to ignore that phone call from your spouse while out riding.

Riding Into the Future – Bit by Bit?

It was while reading an article by Cycle magazine's Phil Schilling that I first came across the term "stone axe" as a descriptive. The subject matter is long forgotten and apparently not retrievable, but it referenced those bikes that, some forty years ago, still touched on the roots of motorcycling in their design and construction. The bikes (and era) Schilling referenced distilled the essence of the motorcycle: a motor attached to what is essentially a bike. That's how it began, and for a great many, that is what a motorcycle should remain.

Of course, that was then, and while Schilling might have envisioned the advent of antilock braking on bikes, it's fair to assume he didn't see throttle mapping, traction control, or, as Bosch is now offering, "vehicle intelligence" or in-vehicle audio/video. Schilling, now deceased, will be doing stoppies in his grave if and when he learns of in-vehicle audio/video. His audio came out of Conti pipes, and video was what you saw and assimilated, and not what you recorded.

Given that my tirekicking began in a department store, where Honda bikes were just a few steps from the cookware, my motorcycle aspirations are firmly rooted in a place and time where bikes were, well, bikes. With many Hondas of that era employing overhead cams and – a few years later but before the end of the decade – a front disc brake, I certainly understood the benefits of tech, but those technologies didn't override the basic functions of a motorcycle. Even with overhead cams, better braking, and improved throttle response thanks to the introduction of fuel injection, the importance of the rider – specifically a skilled rider – remained paramount.

Forty years later there exists on the motorcycle showroom a genuine divide in motorcycle design. Small-displacement motorcycles selling at lower price points necessarily eschew technology, largely because the customer base won't pay for it. Here, at or near $6,000, even ABS is optional, and while throttles may be electronically controlled, there's not the option of altering that mapping. At the other end of the showroom, where performance bikes are designed to thrill and performance touring bikes are equipped to dampen or diminish those thrills, technology is running almost unchecked. Enhancing safety with throttle mapping, better braking and "vehicle intelligence" is worthwhile, but in at least some of those instances the product team assumes the rider is less skilled or distracted. And nothing could be worse for the industry, or that particular rider, than to be distracted while riding a bike – even when the industry has essentially endorsed and/or augmented that distraction.

I have a four-year-old Triumph Bonneville in the garage and I'm in no hurry to replace it with something new. But when I do pull the trigger on a new or newer bike, I would much prefer relying on my own skill set and leave nanny tech to the automakers. The auto industry is into mobility, while I prefer remaining faithful to the more elementary aspect of motorcycles and riding. In short, stone axe motorcycles.