This is it, the headliner, the main event. After years of Lexus promising to make less-boring cars and instead giving us countless spindle-grille facelifts, the 2018 LC 500 is here as the brand's new North Star. It's the official halo to mark where Toyota's luxury brand is headed. This is the car that we hope can bring an end to the relentless mentions of boring cars - which are themselves needlessly boring.

And besides, "not boring" is a terrible metric for evaluation. What Lexus is really trying to do is give its cars some spirit, to transcend the paint-by-numbers stereotype that made this brand the luxury juggernaut it is today. By that yardstick, the LC 500 is a success simply based on how it looks.

It's beautiful in a way that we couldn't predict from the 2012 LF-LC concept that foreshadowed it. The kind of beauty where instead of reflexively grabbing your phone to take a picture, you just stand there and keep looking. And pictures don't do this car justice, anyway. They soften the edges and reduce the massive draw of the wide shoulders. In person, looking straight at the LC, the car looks like it's 80 percent hood. In the rest of the lineup, the trademark Lexus grille's execution ranges from caricature (RC) to botched nose job (LX). Here it pulls everything together. From every other angle, the LC has some feature that seems excessive – in the best way possible. 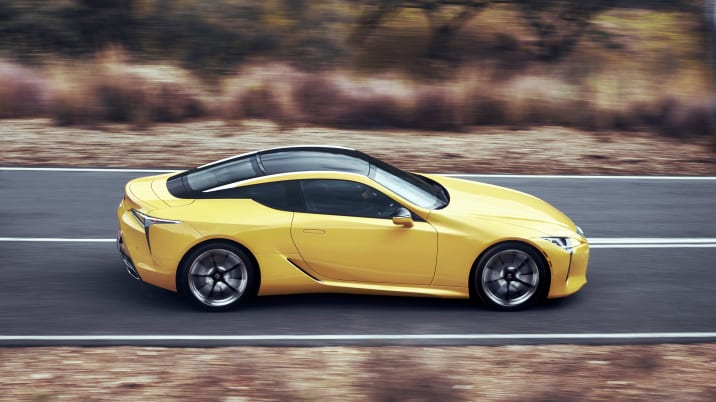 The proportions of the LC give off a distinctively functional vibe, and it's genuine. That hood is so long because the 5.0-liter V8's center of mass sits three and a half inches behind the front axle. The extra space up front is mostly empty - Lexus uses high-strength steel cross-braces to shore up torsional rigidity instead of adding structure ahead of the front wheels, and the battery sits under the trunk floor.

For all the visual excitement, the LC is still a conventional vehicle. Aside from some advancements in the LC 500h's hybrid powertain, the innovation here is of the iterative type. It's interesting, in that Lexus is betting on emotional appeal and driving character at a time when the future relevance of both is up for debate. If anything, the LC is a car for the current automotive world, not the one to come.

And despite extensive use of aluminum and sheet-molded carbon, the LC 500 weighs in at a hefty 4,280 pounds. That's right in line with the BMW 6 Series and a good deal below the Batali-esque Mercedes-Benz S-Class Coupe's 4,700 pounds. But the Benz is all-wheel drive, and the Porsche Carrera by comparison weighs 1,000 pounds less.

But did we mention the LC 500 is beautiful? Yes, this car looks so good it can get away with some extra weight. It can get away with a lot of things, actually. There is raw emotional appeal to the LC, and that's what Lexus - and Toyota - has been missing. 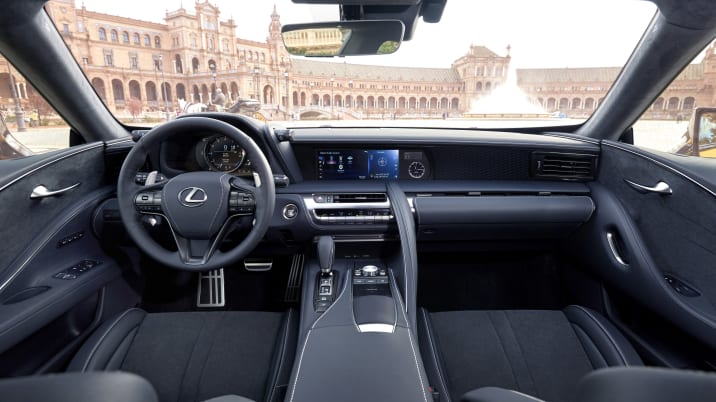 So we give the LC 500 a pass on the wide door sill and low seating position that make ingress and egress slightly challenging. Ditto for the shift lever, which mimics the pattern of the Prius and takes some learning. At least you'll be comfortable while you fuss with putting the car into drive. Lexus went through more than 50 seat designs to arrive at the two available bucket versions. Adjustment is limited to six directions plus four-way lumbar support. That's all you need here, just a few simple movements for maximum comfort. We prefer the extra bolster of the optional sport seats, but both are as close to perfect as you can find today. Lexus went so far as to vary the density of the foam at different points in the side bolster, with resin inserts that add stiffness right where you need extra bracing.

It's those kinds of details that make the interior equally as lovely as the outside. Take the door pulls as another example. In most cars, there is some kind of housing around the handle, hiding the way the mechanism slots in through the trim panel. In the LC that handle sits naked, like a lone tree in a field of Alcantara. All of the trim is stitched by hand, all of the leather is soft, and none of the joints or mating surfaces inside the LC reveal the method of assembly. It's the kind of fine tuning that sets apart established luxury brands and calls out the aspiring ones. With the LC interior, Lexus is showing craftsmanship that belongs in the upper tier.

Lexus wants the LC to be a driver's car, and so the cockpit is focused on the instrument cluster. Which is just as well, because that allows you to ignore the fussy touchpad interface for the infotainment system. Seriously, we barely used it on our test drive; the essential functions - radio and climate control – are operated by hard buttons. Adaptive cruise control and collision mitigation are standard, so there's a safety net should you attempt operating a force-feedback touchpad while trying to do anything else, such as driving. 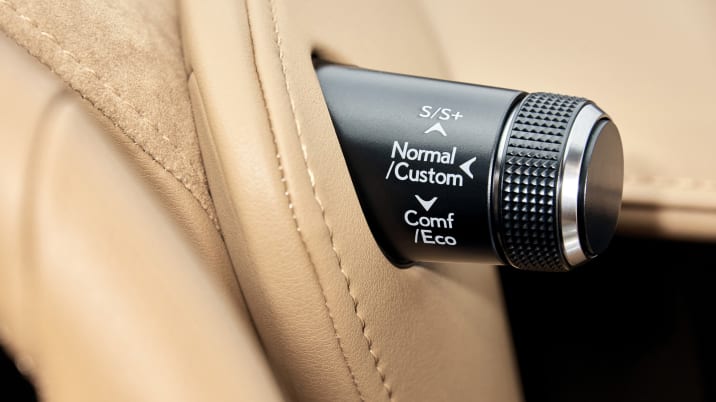 In front of the steering wheel sits a single digital dial flanked by temperature and fuel displays. Like in other Lexus models, the color and design changes with the driving mode. But going back to the driver-centric theme, the drive modes are selected by a knob that juts out of the right side of the gauge cluster housing, right at hand level. Twist toward you to toggle between comfort and eco, twist away for Sport S and Sport S+, or push the button on the end for normal and custom settings. An identical knob on the left adjusts the stability control, but has so few options it seems like a wasted opportunity. The headlight switch could have gone there and allowed for a skinnier turn-signal stalk. As things are, Lexus moved the headlight/turn-signal stalk higher on the steering column for easier use.

At some point we have to mention that the LC 500 has two rear seats. They look comfortable but are not. Our 5-foot, 9-inch frame won't fit under the low roof without serious contortions. The back, then, is best left for the unlikely child seat or extra storage. Reporting duty fulfilled, we'd rather tell you what the LC 500 is like to drive.

First, the good, which centers around the V8. It's largely the same unit found in the GS F and RC F, but some specific tweaks result in 471 horsepower and 398 pound-feet of torque. This engine is why we question turbocharging and downsizing – because horsepower and low-rpm torque don't give you goosebumps, big displacements roaring towards redline do. The LC has a resonator tube that transmits the intake sound straight into the cabin to make sure you can hear that roar, plus electric exhaust flaps to help anyone outside the car. It's loud, but in a polite, Lexus-like way rather than the borderline antisocial howl of a Jaguar F-Type. 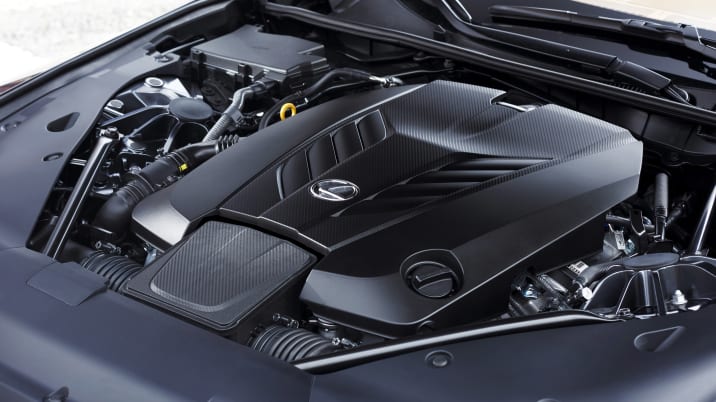 If only the throttle and transmission had the same balance of aggressiveness and manners. Here, Lexus went a step too far in an effort to be sporty. The 10-speed automatic moves the lockup clutch inside the transmission housing instead of packaging it in the torque converter, which allows for a stronger multi-plate design and faster shifts. But they're a little too fast and hard in the sportier drive modes. Then there's the lack of smoothness in the throttle, which comes on with a suddenness that makes the car lurch. It was less of a problem during our laps at Circuito Monteblanco than on the roads surrounding nearby Seville, Spain. The safety margin of driving fast on the street often means you enter a corner slower and dial in throttle as you go. But even on the track the abrupt nature of the gas pedal upsets an otherwise balanced and smooth car.

Our time on the circuit was a great way to explore the LC 500's limits, but this is not really a car for the track, any more than the other members of the large-coupe fraternity are. The LC is more of a gentleman's sports car; a vehicle best suited to speeding along a favorite road. That said, the brakes hold up to track abuse, and the balanced chassis lets you control the back end with the throttle. The steering is linear and accurate but in line with the modern paradigm for feedback: very little.

Don't mistake gentlemanly for slow. The LC 500 gets to 60 mph from a standstill in 4.4 seconds, and it has a linear acceleration feel well into triple-digit speeds. Gears two through nine are almost evenly spaced, which means you never get stuck at a bad point in the rev range. 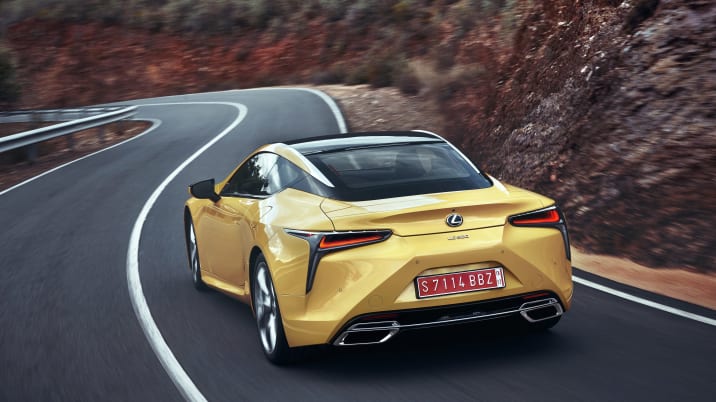 None of the performance-related options on the LC 500 change the suspension setup or the engine power. Available stuff includes a limited-slip differential, 21-inch wheels with aggressive summer tires, variable-ratio steering with rear-wheel steering, a carbon-fiber roof, and a spoiler that extends from the trunk lid. Lexus is still working on the specific packages and options ahead of the May 2017 on-sale date. The test car we drove had the variable steering, which we can praise for the fact that we didn't notice it was there. Still, we doubt much is lost in the experience without this feature.

The rest of the purchase specifics are just as murky. Lexus will only commit to a starting price under a hundred grand, and we believe a fully loaded LC 500 will top out around $120,000. Only about 400 units are expected to come to the United States a month, or an annual rate of 4,800 cars. Lexus says about 85 percent of those will be V8s, the rest will be LC 500h hybrids.

At such low volume, the LC isn't going to redefine Lexus the way the original LS shocked the automotive world. But this car is hugely significant for another reason: It shows that Lexus can create an object of irrational desire. To put it another way, this is a car you want, not a car you need. And we lust after the LC 500. Not because it checks all the boxes, but because it's more than the sum of its specifications. It does most everything well, it has some flaws, but more than anything it has character. Welcome to the new Lexus.