Opting Out Of The Horsepower War Performance cars used to be about horsepower and chassis tuning. Lately the question isn't so much what's under the hood, but how many buttons are on the console. We're overwhelmed with individual settings for engine response, transmission, exhaust, steering, and ride. When did these cars turn into a choose your own tuning adventure?

The Lexus GS F represents an attempt to step back from this over-adjustable madness and return to more bygone sports car values. It has a special engine, unique bodywork, and a chassis tuned for high performance. There are only two settings you need to play with.

The first setting is the Drive Mode Select dial on the center console, which mainly controls the response of 5.0-liter V8 engine and the shift behavior of the eight-speed automatic. The engine is the same V8 found in the RC F, making the same 467 horsepower and 389 pound-feet of torque. New this year are small balancing weights on the crankshaft pulley that cut down on internal vibration. Drive Mode Select also changes the electronic power steering, air conditioning, and stability control (you can also turn it all the way off via a separate button).


The engine is the same V8 found in the RC F, making the same 467 horsepower and 389 pound-feet of torque.

You will use two settings in the GS F: Eco when you want to get somewhere, Sport S+ when you want to get somewhere fast. Normal and Sport S modes offer intermediate steps you don't really need. Eco mode softens the throttle and reduces the use of air conditioning for slightly better fuel economy. It also makes the center-mounted tachometer switch into an eco-driving gauge.

S+ puts everything into sport mode, including a heavier steering weight and a higher stability control threshold. While Sport S mode shifts the noon position of the tachometer to just below the horsepower peak of 7,000 rpm, S+ goes a step further and turns the rev indicator into a solid bar that grows around the edge of the display. It also adds oil and coolant temperature to the readout. And how could we fail to mention G-Force Artificial Intelligence (or grin at such an overwrought name)? That's the shift logic the transmission uses in Sport S+. It's designed to hold revs in corners and downshift during hard braking. 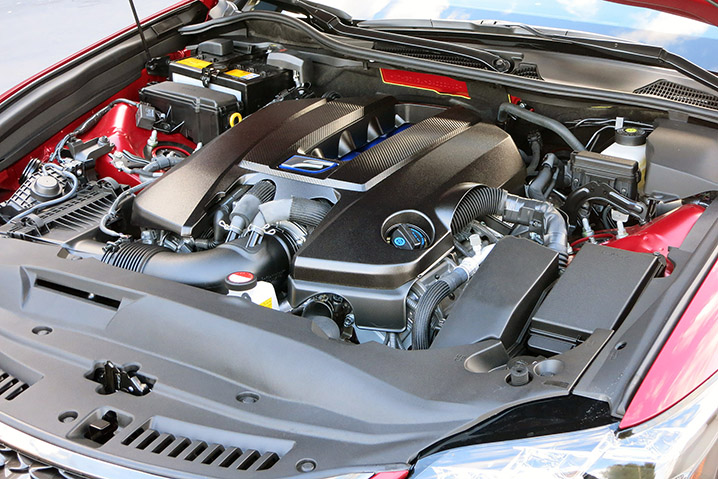 "Our goal with F is to make a driver's car, not a drag race winner."

The other button in the Lexus GS F that you need to pay attention to is next to the Drive Mode Select knob, labeled TVD for Torque Vectoring Differential. It's the same unit that is optional on the RC F, but it comes standard on the GS F. The center of the TVD is an open differential. On each side is a clutch pack operated by an electric motor. This allows the GS F to control the engine torque side to side without using the brakes. Going into a corner, the TVD can put all the engine drag on the inside wheel to improve turn-in. On the power, it can shift engine thrust to the outside tire and prevent oversteer. There are three settings: Normal, Slalom, and Track. In keeping with our theme, that's probably two settings too many.

Rounding out the F treatment is a custom suspension devoid of any active or progammable damping, anchored to a more solid body. The GS F derives its extra rigidity from structural adhesive, more welds in key areas, and underbody bracing. Brakes are by Brembo, with 15-inch discs clamped by six-piston calipers in front and 13.6-inch disc, four-piston calipers in back.

The GS F is not Lexus' answer to BMW M, Mercedes-AMG, or Cadillac V. If it were, this car would be woefully outgunned. The competition offers 83 to 173 more horsepower, all with vastly superior torque. To its credit, Lexus knows this. One spokesperson even spelled it out, saying, "Our goal with F is to make a driver's car, not a drag race winner." It's a rationalization or an excuse, depending on your personal level of cynicism. Being eternal optimists, we'll give the GS F the benefit of the doubt. 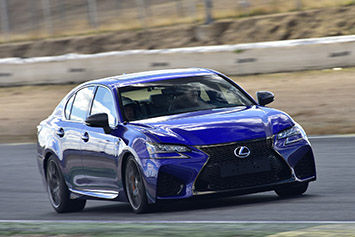 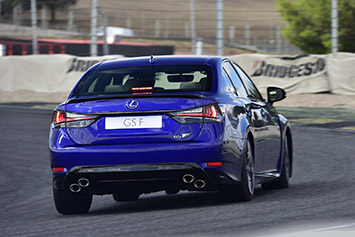 The GS F lacks the brash styling or incredible power figures of its competitors. But it's also a great deal less expensive.

Where the Lexus does match the competition is in how the GS F is set apart from its ordinary brethren. Like the other elite models, the GS F looks and feels special. All the bodywork in front of the A-pillars is unique to the F, including the massive openings on the edges of the lower grill that house oil and transmission coolers. Inside, F badges on the perforated leather steering wheel and embossed into the rear seat headrests give the interior a subtle flair. The generous use of Alcantara and no-cost optional carbon-fiber trim elevates the cabin above everyday GS models. Inside and out, the GS F is handsome, if anonymous. It's the kind of car that stands out at a golf club, not a gentleman's club.

So the GS F lacks the brash styling or incredible power figures of similiar efforts from other automakers. But it's also a great deal less expensive. The base price of $85,380 includes everything but two options: a Mark Levinson stereo system and orange-painted calipers. Only the CTS-V is close, at $85,990, but that can be optioned up near the $100,000 stratosphere occupied by the Audi RS 7, BMW M5, and Mercedes-AMG E63. The GS F occupies a middle space, just above cars like the Audi S6 and Cadillac CTS Vsport. And the Lexus comes loaded with adaptive cruise, automatic high beams, lane keeping assist, blind-spot warning, navigation, and head-up display. 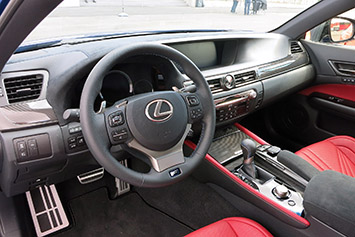 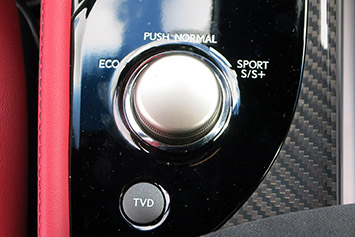 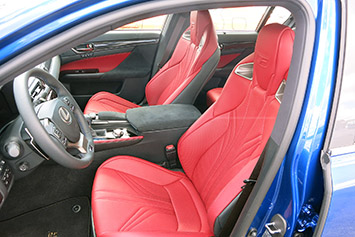 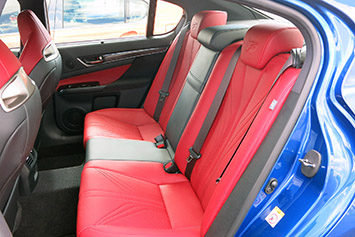 While other manufacturers make their cars racier and racier, Lexus has found a sweet spot between performance and comfort that suits them.

Expectations thus hedged, the GS F is almost a great driver's car. In a painful irony, the last of the naturally-aspirated V8s is almost silent. Oh sure, you can hear induciton noise, but it's synthesized through a speaker in the dashboard. Sport S+ mode adds fake exhaust noise from the rear. Open the windows, and there's hardly any natural sound to be heard. A shame given that the authentic noise from the original IS F, with an earlier version of the same engine, was one of that car's best traits.

The other knock against the GS F is lifeless steering. It's precise and direct, but doesn't build weight with cornering load. The only way to increase feedback to the driver is to pick up the speed through corners and judge the car's behavior from the seat of your pants.

But dang it if the GS F isn't comfortable. The front seats are perfect, adjustable in eight directions plus lumbar. The ride is similarly supple. Perhaps the best part about the GS F is that it retains some inherent Lexus-ness. While other manufacturers make their cars racier and racier, Lexus has found a sweet spot between performance and comfort that suits them. 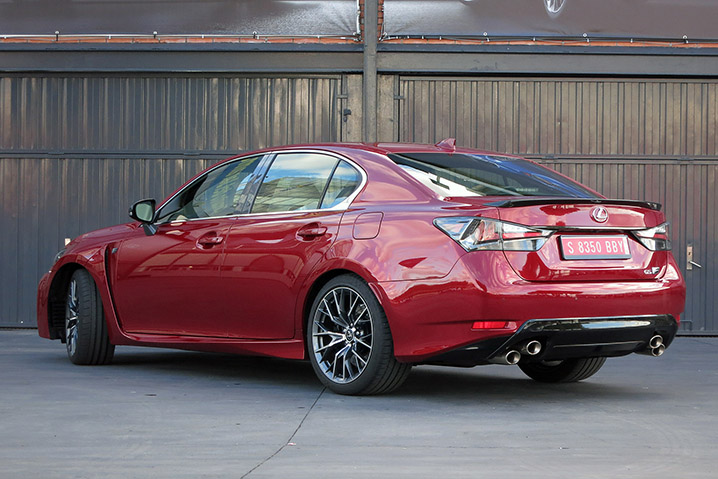 It's a try at making an analog, balanced sports car when digital trickery and overwhelming power are the norm.

And no, that's not to say the GS F can't handle the curves. After a couple of hours driving mountain roads outside of Madrid, Spain, we took to the Circuito del Jarama for a few laps. Lexus had the RC F on hand for comparisons as well. Despite the similar powertrain, the GS F has a totally different feel than its coupe counterpart. The RC F is quicker, in part due to a 100-pound weight advantage, but the sedan is easier to drive fast and more neutral through corners. Credit that compliant suspension, which handles weight transfer more smoothly than the stiff RC F. The coolest trick up the GS F's sleeve is the TVD, which wipes out understeer in Slalom and Track modes. With the push of a button the car feels like inches have been cut from the wheelbase. We're still not sure what purpose the Normal setting in the TVD is for, but as we mentioned, such over-adjustability is in fashion.

On paper the GS F is underwhelming. Even in the lower drive mode settings this cars feels tepid. Change to Sport S+ and the GS F all of sudden fulfills the promise of that F badges on the front fenders. It's not a car that will win drag races, and the CTS-V is an unbeatable counterargument. In some ways the GS F is out of place in the modern world. It's a try at making an analog, balanced sports car when digital trickery and overwhelming power are the norm. And the electronic pieces of the GS F – steering and engine noise – are its weakest traits. But the rest of the car's charms increase with every mile behind the wheel. For those interested in one of the 2,000 units Lexus is bringing to the US, that's just fine.