Joel Stocksdale
The biggest issue facing alternative-fuel vehicles is finding somewhere to fill up when traveling long distances. The Federal Highway Administration ( FHWA) hopes to change that with a series of alternative-fuel networks covering well-traveled corridors across the country. These routes will stretch across 35 states, offering charging points for electric vehicles and filling stations for hydrogen, propane, and natural gas cars.

While there will be routes for all of the listed energy types, they do vary in coverage. Looking at the maps created by the FHWA, electric charging stations (pictured above) will cover the largest portion of highways, closely followed by compressed natural gas (CNG). Hydrogen will have a much smaller network (pictured below), and will be limited to places such as California, Colorado, and a large section through Missouri, Illinois, and Wisconsin. Liquified natural gas (LNG) and propane also have less reach than electric and CNG routes. You can check out all the maps at the FHWA's website. 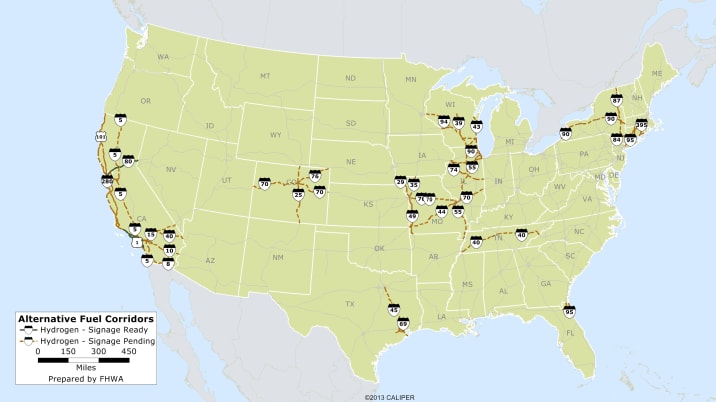 These networks also break down into sections that are "signage-ready" and "signage-pending." What this refers to is whether there are stations already in place and usable on a portion of a route. If there are active stations on a route, it is considered signage-ready, and signs will be placed to indicate the locations of filling stations. If there aren't stations yet on proposed routes, those sections are "signage-pending," and won't get signs until facilities are installed. Which makes sense.

The routes were also determined using recommendations from individual states on where stations would be useful, while the selected fuels were chosen by Congress. More routes will be added in the future, and states will give further recommendations next year. With these routes, living with alternative fuels should become much easier.