What the Volkswagen I.D. concept tells us about the post-TDI future

Maybe the best thing to come out of the diesel scandal. If you've been paying attention, 2016 hasn't been a great year for Volkswagen. The TDI scandal removed VW's last crutch between our internal combustion present and the electric future, and so the company found itself scrambling to shift resources to show what's next right now. It's naive to assume that this is truly the sort of fairytale comeback story that VW's spin doctors would have us all believe, but it's notable that instead of flinching or pointing fingers, the engineers got to work.

What they've produced is the I.D. concept, the third wave in VW's volume car history after the Beetle and Golf. The transaxle Golf was more than simply an updated Beetle, and likewise the I.D. is more than an electrified Golf. VW says the I.D. won't replace the Golf, but they said the same thing about that car replacing the Beetle. It's only a matter of time.

VW says the I.D. won't replace the Golf, but they said the same thing about that car replacing the Beetle. It's only a matter of time.

The I.D. approach is refreshingly simple: no carbon fiber chassis, no exotic battery chemistry, no outrageous concept car styling. The MEB chassis (the German acronym for modular electric platform) is made out of a traditional mix of high-strength steel grades to save costs and utilize existing factories. The battery is integral, not swappable, to reduce complexity and increase structural rigidity. It's also uses lithium-ion chemistry because of a proven track record and an existing (albeit deficient) supply chain. Contrast that with the e-Golf, which shares its chassis with the conventional internal-combustion cars. Fitting the battery and its ancillary systems became complicated and expensive. The skateboard installation in the I.D. will allow the pack to be optimized for the space available, reducing costs. 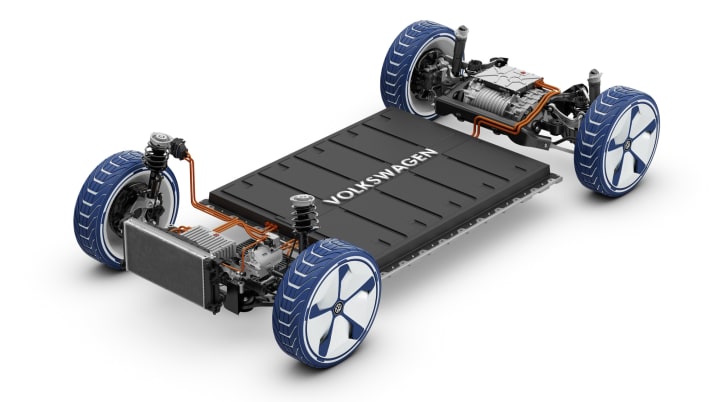 As we've already reported, MEB will be shared across all VW Group brands to achieve an economy of scale, and the modular platform can be stretched to the size of roughly a Passat and down to a car slightly smaller than the I.D. It can be given all-wheel drive, although VW's e-mobility chief Christian Senger is quick to point out that the standard rear-drive configuration provides plenty of traction because of optimal weight distribution achieved with battery in the middle of the chassis. It makes all-wheel drive more of a bonus rather than a necessity in bad weather.

This all sounds like a common-sense approach, but the more we heard about VW's MEB plans the more it became obvious that this is a long play rather than a bandaid. The overarching goal is to minimize variability between MEB variants. VW is already one of the most efficient automakers in terms of manufacturing, using several modular chassis architectures to build a vast majority of its vehicles. In the future VW may only have two related architectures: MEB and something larger, for commercial vehicles and large SUVs. They will all share a basic suite of autonomous sensors (and the capability for fully-autonomous operation by 2025). And to run them all the I.D. and its ilk will turn to a more robust computer system requiring a full-blown operating system. All that extra processing power should make the vehicle a little more intuitive, like iOS, claims VW.

The potential to build a portfolio around as little as two architectures, with shared sensors and computer systems, sounds like great news for Volkswagen. In Paris, the company also took pains to assure us that the customer experience of I.D.-like vehicles will be positive, based on two major points. The first is perhaps the easiest to understand: simplicity. VW imagines the I.D. won't require more than a couple minutes of orientation at a dealer for the customer to be able to operate all the car's major functions – infotainment and otherwise. This contrasts starkly with the current feature bloat, rampant in German cars in particular, in which ever-increasing complexity is held out as a sign of progress and sophistication – and requires hours of training to fully utilize. 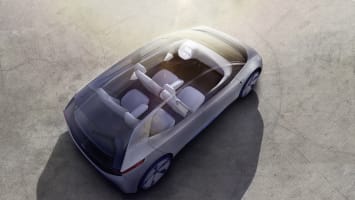 The second is a bit harder to grok, especially if you lean to the enthusiast side of the spectrum. Because the I.D. is primarily intended to be autonomous, the appeal won't be how it drives but rather its design. VW hopes you'll think of the I.D. as something approaching a living room full of designer furniture, with a high-end TV and an audiophile-approved sound system. Think about the appeal of trendy, tech-savvy minimalism rather than romantic notions of string-backed gloves and twisty B-roads. It'll be an adjustment.

But let's also not forget about the exterior styling, which owners will still take some pride in. Despite appreciating its overarching simplicity, a conservative but logical approach, the I.D.'s sheetmetal might be too safe. The profile is handsome enough, Golf-like with a modernist twist. It's obvious that the powertrain packaging opened up more living space within a similar footprint. It's hard to imagine anyone who drools over the latest tech gadgets to lose sleep about the I.D.

What it's lacking is the charisma or radicalness of its spiritual predecessors: the Beetle and the Golf, both of which had shapes that bridged the gap between city car utility and industrial design magnificence. No counterculture will adopt the I.D. as its icon, like the Beetle, nor will its sharply-creased shape almost singlehandedly create a massively popular genre, like the Golf did for hatchbacks. Nor is the form factor terribly novel; it's a conventional shape, made somewhat sleeker to optimize it for the smaller and relocated powertrain. This is refinement of an existing idea rather than a new one entirely.

What we don't see in the I.D. we'll probably see in future MEB variants. VW's new US chief, Hinrich J. Woebcken, has ambition for the company here. Currently, VW has vehicles in roughly 40 percent of available segments (with the mid-size SUV being a massive hole in the lineup, which we briefly drove and will see in LA). Woebcken wants to hit 70 percent. They can do this with an accelerated rollout of vehicles in the pipeline. The 2017 Golf Alltrack will help until the new, long-wheelbase Tiguan arrives next summer. Then the Golf gets a mid-cycle refresh, and after that the Jetta and eventually the Passat will return to the more refined MQB platform. A sub-Tiguan sized SUV is a possibility.

It's going to take some time and effort to rationalize VW's lineup to fit all the required niches in the US market. You can imagine how much easier it'd be to deal with a single, flexible platform like MEB. Select a wheelbase and battery capacity, and all you'll need to do is style a body and interior to bolt up. Vehicles too niche to justify now, like a VW Bus revival, become significantly more plausible in the MEB universe. When asked, Woebcken refused to rule out a MEB-platform Bus, perhaps along the lines of the Budd-E concept we saw at CES earlier this year.

To fully realize the MEB dream, VW will need to move the charging infrastructure forward. Interestingly, China might be in the lead here and the strongest candidate country for an MEB breakout. China has announced a goal of building 4.8 million charging stations scattered around the country by 2020, and considering the production version of I.D. is due that same year, VW has taken a strong interest in the Chinese market for EVs. And the I.D.'s projected price point, which is right at the level of the European Golf's volume trim (without subsidies factored in), won't hurt. If incentives in Europe stay at current levels, the I.D. will end up being so cheap you'd have to be nuts to buy a Golf instead.

That's the promise of MEB, despite the relatively conservative I.D. approach. Extreme simplification will paradoxically allow for almost endless variation in form and function, at greater profitability. The form we saw here at the Paris Auto Show is only the beginning.