Sebastian Blanco
Finally, we have all of the details of Volkswagen's new all-electric I.D. concept. The diesel-scandal tainted company is making a big push for the new EV, so let's see what all the hype is about. In a nutshell: up to 373 miles an arriving in 2020. That range, by the way, is measured using the European NEDC test, which results in bigger numbers than the EPA test used in the US. More importantly, VW is promising the car will get a fully autonomous driving mode in 2025. Oh, and it shouldn't cost an arm and a leg, either. VW says the I.D. will cost about the same as a, :comparably powerful and well-equipped Golf." Since VW is saying it wants to sell a million EVs a year by 2025, it can't price them too high.

Thanks to a slew of new pictures, we can now see that the I.D. continues the industry trend of making its electric powertrain obvious from the vehicle design. VW says the I.D. has a "newly developed design DNA for electric cars." There are hints of the BMW i3 here, but smoothed out and made more cohesive. There's no standard grille, but there is an apparent airflow opening all along the bottom of the front fascia.

Beyond the futuristic look, the I.D. has a 168-horsepower electric motor, which should give way it better acceleration than the company's current EV offerings. Today's e-Golf, for example, uses a 114-hp motor, while the smaller e-Up! has a motor that offers just 80 horsepower. The motor is good for a zero-to-62-miles-per-hour time of under eight seconds and a top speed of 99 mph. The battery will hold enough energy to move the I.D. between 249 and 373 miles, with the caveat mentioned above. There are both wired and wireless fast charging options, naturally. 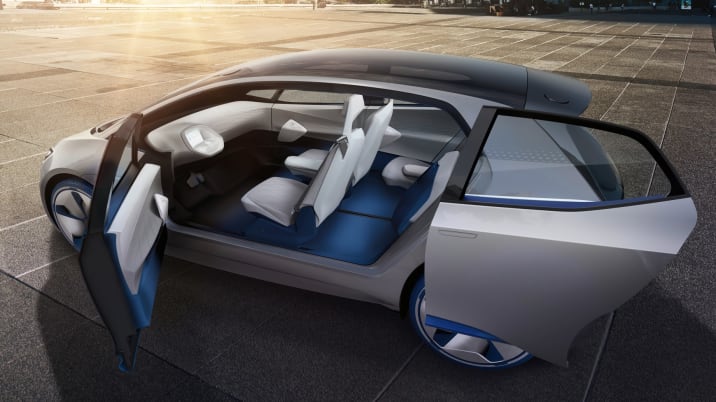 Inside, the I.D. offers VW's new Open Space design, which for now looks just as spaceship-y as you'd expect. Since the lithium-ion battery pack is a flat rectangle on the floor and rear-mounted electric motors can be smaller than comparable ICE engines, there's a lot of interior design room to work with. Thanks to sliding rear doors and thin seats, there should be a lot of room in the I.D. Almost 34 cubic feet of luggage space, to be exact. If the steering wheel is taking up too much room, you'll be impressed to know that, once the AI driver – called I.D. Pilot – arrives in 2025, it will telescope into the dashboard when you don't need it. Oh, and side mirrors are for pikers. Cameras and screens are all you need, apparently.

There's another hint about VW's future plans in the name. VW wants every one of its drivers to get a "Volkswagen ID," that will contain your personal information and settings like seat position, favorite radio stations, and contact details (among other things). The VW ID will be kept in the cloud and allow your smartphone to access the vehicle. The high-tech wizardry continues in the AR-Head-Up Display, which projects arrows and other virtual images on the windshield to help the driver where and when to turn.

As we learned a few weeks ago, the I.D. will be the first VW that will use the company's new Modular Electric Drive (MEB) platform. It won't be the last, though, since VW is saying that is, "The first Volkswagen in a completely new fleet of highly innovative electric vehicles" that will use the MEB.