The Volkswagen of tall wagons View All Specs
Funnily enough, in light of dieselgate, Volkswagen is one of the few brands (along with Volvo and Subaru) to preserve the notion that you don't need a fuel-sucking SUV to meet your life-carrying needs. And, yes, VW's history of addressing off-road desires with all-wheel-drive dates to the mid-1980s with the Quantum Syncro (a.k.a. Passat) and Golf Country – the latter, sadly, never came stateside.

The latest offering toward this effort is the 2017 Volkswagen Alltrack. What's an Alltrack? It's a slightly lifted, cladded, and butched-out version of the Golf Sportwagen (yes, formerly known as a Jetta). Not to steal Alltrack's thunder, but starting in 2017 you can also get the standard Sportwagen with 4Motion AWD, which is basically the same running gear for less money. The Alltrack starts at $26,950; the 4Motion Sportwagen starts at $24,930, both with the dual-clutch automatic available at launch.

Any discussion of tall wagons brings Subaru immediately to mind, both with the Outback and the Impreza-based Crosstrek. The Volkswagen Alltrack sits between the two in size at 180.2 inches long – 5 more than the Crosstrek and 9.4 inches shorter than the Outback. The 2017 Subaru Outback starts at $25,645, and VW's comparisons focus on the Outback, which is understandable given the similar starting price. A bare-bones Crosstrek starts at $22,245, but quickly gets into Golf price overlap. 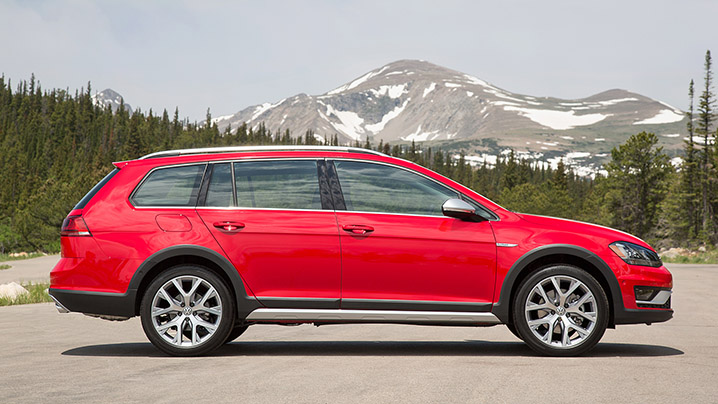 The Alltrack and the 4Motion Golf Sportwagen are superior daily drivers to the Subaru, whether you're doing an emergency lane change or just trying to merge onto the interstate. Meanwhile, the Crosstrek doesn't have the refinement of the VW. Can we fault Subaru though? It's set a sales record every year in a row since 2010 and is looking at about triple the sales volume of VW's Golf for 2016.

So we'll stick to telling you what we think of the Alltrack and let the dealers fight for your dollars. First thing's first. Yes, you can have the Golf Sportwagen and even the Alltrack with a manual six-speed gearbox. The seven-speed DSG automatic is very good, but it's worth noting that any manual gearbox is a rarity these days, especially when we're not talking about a two-seat sports car. You will have to wait until early 2017 for that option, but it also saves you $1,100 off both models.

Second, the Alltrack and 4Motion Sportwagens get identical engines. Whether manual or DSG, VW's EA888 turbocharged 1.8-liter four-cylinder is under the hood. Horsepower is a decent 170 at 4,500 rpm, but VW officials want you to eyeball the torque: 199 pound-feet at just 1,600 rpm. The Subie needs to wind the engine out to hit its torque peak: 174 lb-ft at 4,000 rpm. Plus the Alltrack is about 200 pounds lighter than the Outback. What they didn't say is that the Alltrack's 22 mpg city/30 highway fuel economy is bested by the Subaru's 25 city/32 highway, and that even the more potent, optional 3.6-liter for the Outback isn't terrible, at 20/27 mpg - and more muscular with 256 hp and 247 lb ft. You do have to bring $34,995 to the party if you want that bigger Subaru engine, while the fully loaded Alltrack SEL stickers for $32,890. 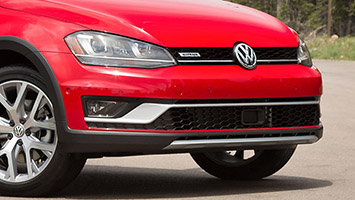 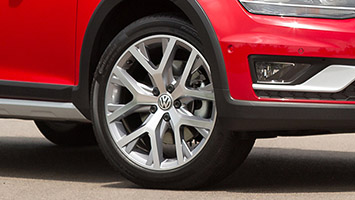 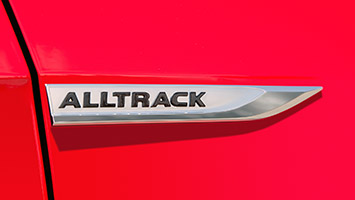 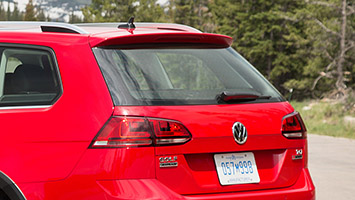 The Alltrack is peppy enough, in part due to the quick-shifting DSG (VW didn't have a manual for us to test at the press launch). The VW never felt overtaxed on the highway or when climbing gravel-strewn mountain two-tracks, and it's an engaging powertrain that also sounds good, but only at full stomp. At partial throttle you hear the a muted engine note, which is likely preferable for anyone shopping for a wagon of this ilk.

A key to the "Volkswagen-ness" of the Alltrack experience that makes it more fun than the Subarus is the suspension and steering feel. VW lifted the Alltrack 0.6 inches, to offer 6.9 inches of ground clearance. This is nowhere near the 8.7 inches of the Outback, although nearly identical to the 7 inches of a Nissan Pathfinder. With the modest lift the Volkswagen retains on-center steering feel and excellent cornering. Although it's not a GTI (obviously), the Alltrack's on-pavement behavior is more planted and quick in turn-to-turn transitions than any SUV remotely within this price realm. And although not as fast as the new Volvo V60 Cross Country, it's equally refined in ride quality and handling poise – and considerably more affordable.

Mechanically the Alltrack and 4Motion Sportwagen are almost identical. The only slight difference is 10.7-inch solid rear discs, vs. the 10-inch rears on the 4Motion model. But the Alltrack also gets both a Sport setting to the transmission (which holds gear changes longer but doesn't seem to affect the aggressiveness of throttle tip-in) and an off-road mode that automates hill-descent control at under five mph, loosens ABS interference to allow more wheel spin, and slightly deadens the throttle to allow easier modulation of gas and brake when you're tiptoeing over rough terrain. 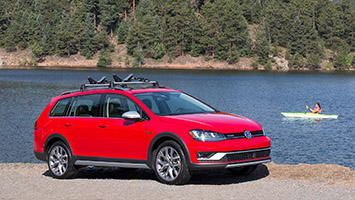 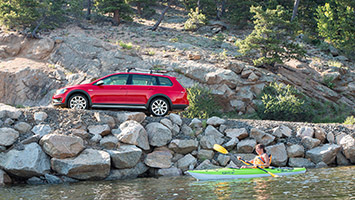 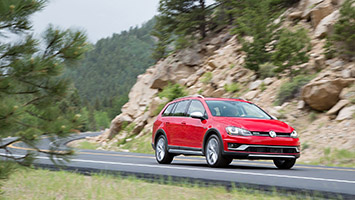 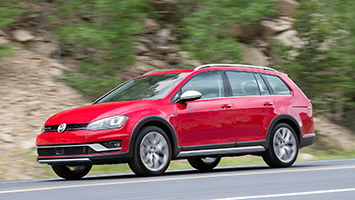 Much to the horror of Subaru fanboys, the Alltrack doesn't have constant all-wheel drive, but instead 4Motion is a Haldex system that works via an electro-hydraulic center-diff clutch pack to send up to 50 percent of power to the rear wheels. Instead of merely working when the system detects slip, the Haldex unit also monitors steering angle, lateral acceleration, and the rotation of the vehicle to send power reward in minute doses. Side-to-side power is managed via cross-differential lock (XDS), which brakes the inside wheel during cornering to prevent understeer. There's also an electronic differential lock (EDS), that brakes any wheel that's slipping, regardless of whether or not it's being driven. These last two items aren't the mechanical traction solutions that, say, Jeep aficionados require, but it's enough for most drivers in most scenarios.

Testing the Alltrack on fire roads outside Seattle we were able to get both left and right wheels lifted off the turf and they continued to turn at the same speed as the grounded, driven wheel. Yet we saw no loss of power through the rear drivetrain. Nope, we didn't get to push the Alltrack through the muddiest, most treacherous terrain in the forest, either. It was more than capable on roads that any RAV4 or CR-V could tackle, however, and that's fine, because that's just the kind of customer VW is hoping for.

Speaking of which, the Alltrack is beefier than the stock 4Motion Sportwagen both cosmetically and functionally. There's significant plastic or metal cladding surrounding the entire lower edge of the vehicle, as well as light underbody protection to key components, such as the oil pan. It's not a Jeep Wrangler, but it's legitimately more rough and tumble than the stock 4Motion. 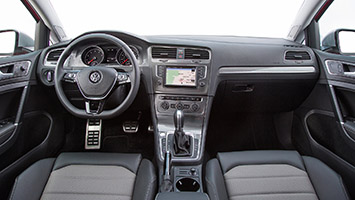 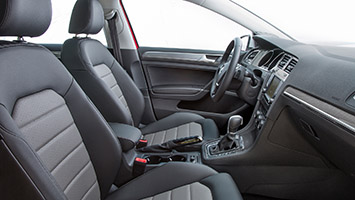 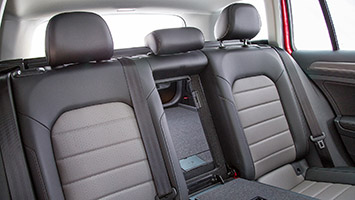 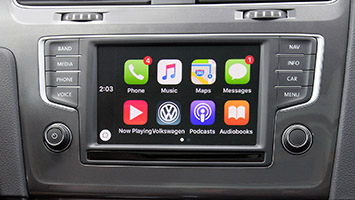 Inside the seats are easily best-in-class. Volkswagen already does this very well, and all its cars default with ample side support during sportier driving, which is atypical for a midsize $25- to $30,000 crossover. Fog lights and VW's Car Net App Connect come standard on the lowest spec, and that includes both Apple CarPlay and Android Auto, as well as a color touchscreen display that's fairly logical to use with tablet-like swipe functionality. A backup camera is also standard and is hidden beneath the rear hatch VW logo, pivoting the badge out of the way when you put the car in reverse, and then disappearing like a scared groundhog into its cubby when you switch to a forward gear. This may seem overly complex but it's a good thing, since it prevents the camera lens from getting covered with grime.

Probably the best deal as far as options go is the $845 Driver Assistance Package that gets you adaptive cruise control (ACC), forward collision warning, and autonomous emergency braking that can slow the car to almost a complete stop. This package also includes front and rear park distance control, and parking steering assistant that automatically parallel parks the car.

You get yet more if you step up to the SE or SEL versions of the Alltrack, including a panoramic glass roof that comes standard with both of these models. We stuffed ourselves in the second row and he found plenty of knee room, and even a six footer seated behind a driver of the same height fits in the second row comfortably. That's because there's a great deal of second row headroom, and when equipped with that glass roof the rear quarters feel airy rather than claustrophobic. 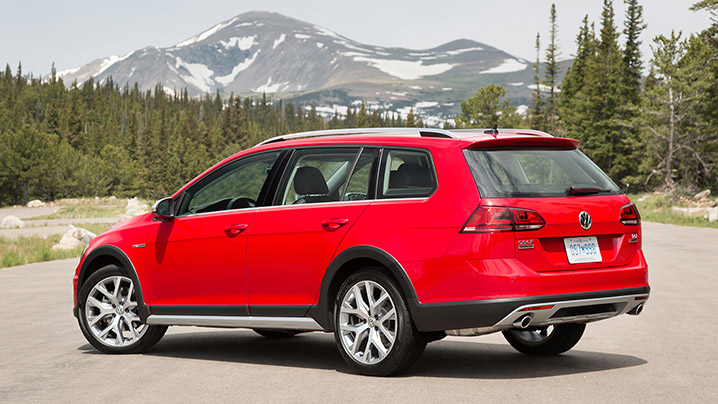 Gripes? Here's the primary one. If you are indeed cross-shopping the Outback, that wagon's 35.5 cubic feet of stowage aft of the rear seats and 73.3 cu. ft. with them folded smokes the VW's 30.4/66.5 cubic feet. The Alltrack looks yet worse against true crossovers like the Honda CR-V (37.2/70.9 cubic feet). Chalk up a win against the Subaru Crosstrek, though, which only has 22.3 and 51.9 cubic feet. "Only" being relative here, as 20 cubic feet is huge for a sedan trunk.

This likely isn't a deal breaker. Hendrik Muth, Volkswagen of America's vice of president of product marketing and strategy, says the Alltrack is targeted at a younger buyer who wants a car that's more nimble than the Outback. He also cites the lower roofline that enables loading bikes, kayaks, and other outdoor sports equipment more easily than rival off-road-focused SUVs.

Still, probably the biggest edge for the Alltrack against the Outback is really aggressive pricing. It also looks great, comes in sharp colors, and of course presents an alternative to would-be Subaru buyers who don't have either Audi or Volvo money. Look for VW to keep up that kind of bargain strategy going well into the future, because one way to help shorten the memory of a wary consumer is to offer them a great deal on a car that does a lot of things better than more expensive alternatives. 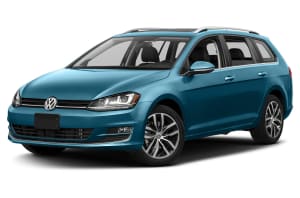