The Singapore Grand Prix always features a safety car. This year the nation-state got caution out of the way early: seconds after the lights went out, Toro Rosso's Carlos Sainz collided with Force India's Nico Hülkenberg, sending Hulk into the wall minus a wheel and some bodywork. The safety car led the field for three laps, then ducked into the pits so abruptly that a track marshal was still retrieving debris as race leader Nico Rosberg hit the throttle down the front straight. 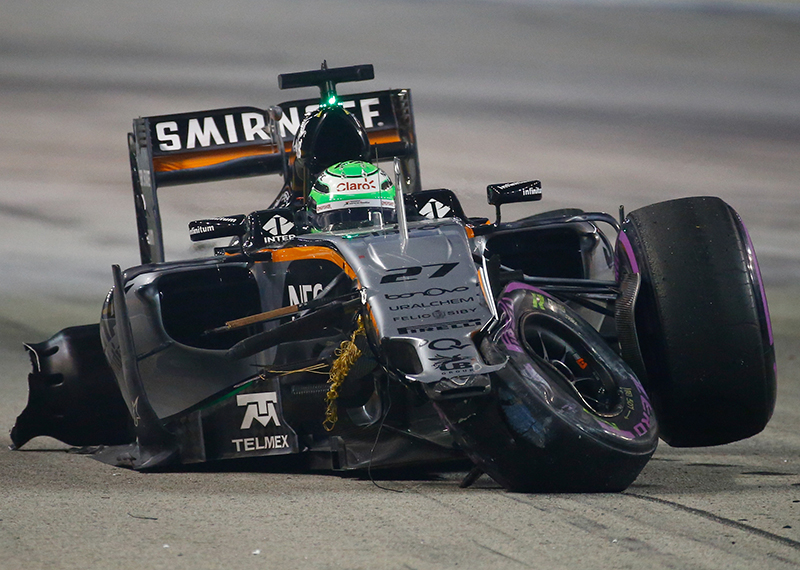 Rosberg avoided the pedestrian on his way to a two-second lead over Daniel Ricciardo in the Red Bull, Lewis Hamilton in the second Mercedes-AMG Petronas, and Ferrari driver Kimi Räikkönen. On Lap 8 of the 61-lap race Mercedes engineers warned Rosberg and Hamilton about brake management. Rosberg had no trouble until the waning laps of the race, his teammate inadvertently the cause.

Räikkönen got ahead of Hamilton on Lap 33 while Hamilton nursed his car. Trying to get Hamilton back in front of the Ferrari, Mercedes pitted Hamilton on Lap 46 and also ordered him to turn his engine up. Ferrari debated for a lap about whether to bring Räikkönen in, finally issuing a last-second order to pit.

The Finn emerged behind Hamilton, but executing the trick to get Hamilton back into third gave Ricciardo breathing room in second place. Red Bull brought Ricciardo in on Lap 48 for a set of super soft Pirellis. Returning to the track 25 seconds behind Rosberg, Ricciardo cut from one to four seconds out of that gap on every lap. By Lap 59 the Aussie was little more than a second behind the German. 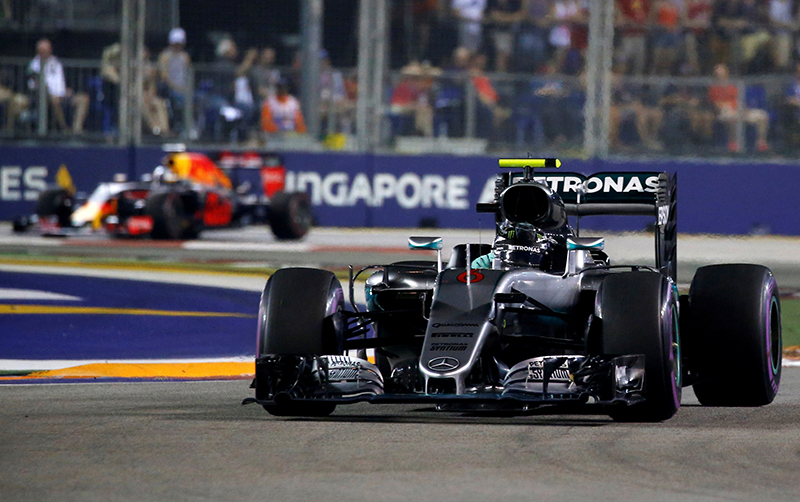 Had the race gone three more laps, Ricciardo might have pulled off the upset. This time Rosberg stayed in front to win his third race in a row and his first victory in Singapore, all in his 200th grand prix. Ricciardo and Hamilton completed the podium; Räikkönen claimed fourth.

Sebastian Vettel wrangled an incredible fifth place after starting last; the German set the worst time on the grid when his suspension broke in Q1. Max Verstappen, having lost places at the start due to wheelspin again, recovered for sixth. Fernando Alonso made the most of his McLaren with seventh, ahead of Sergio Perez in the lone remaining Force India, a resurgent Daniil Kvyat in the Toro Rosso, and Kevin Magnussen scoring Renault's second points finish of the season.

Hamilton has not had a good time of it since the end of the summer break – engine troubles in Belgium, a botched start in Italy, and zero rhythm in Singapore. Seemingly back to his dominating ways after winning four races in a row, the Briton's nine-point Driver's Championship lead at the end of July is now an eight-point deficit to new Championship leader Rosberg. It's impossible to know which side of the Mercedes garage will conquer on Sunday for the six remaining races. 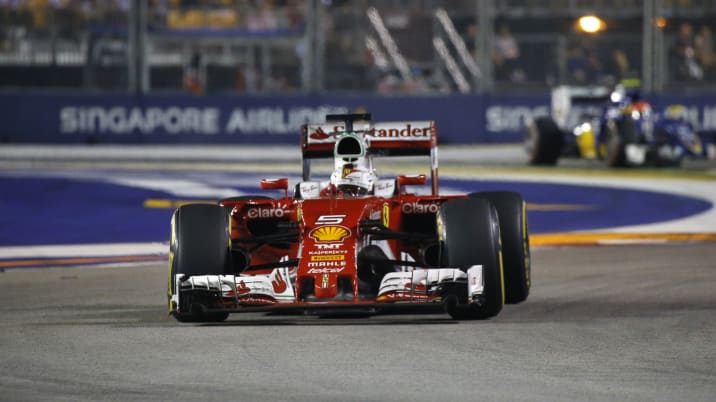 Nevertheless, safe bets have Mercedes winning out the season. Plenty of observers questioned whether Räikkönen should have made a third stop in Singapore or stayed out and made Hamilton catch and pass. Judging by the pace Hamilton and Ricciardo had after their pit stops, it's conceivable that Hamilton would have gotten around a Ferrari on comparatively ancient tires. Ferrari strategy is a minor issue, though, the real problem being that the SF16-H isn't good enough. Last year Vettel triumphed in Malaysia – the next race on the calendar – but Ferrari appears too far behind the Silver Arrows to put up a fight at a power track. For all we know, Ferrari might be too far behind Red Bull, too.

Fortunes behind the leading teams were mixed. Alonso put on a good show for McLaren, and teammate Jenson Button retired with collateral damage from the start-line accident. Kvyat made his best case for keeping his seat at Toro Rosso next year, as did Magnussen at Renault. Esteban Gutíerrez scored his fifth 11th-place finish for Haas F1, while teammate Romain Grosjean suffered one of the worst weekends of his career, retiring before the race began. Williams' Valtteri Bottas got knocked out by seat belts; somehow his straps came loose, and his engine overheated while his pit crew re-secured them. 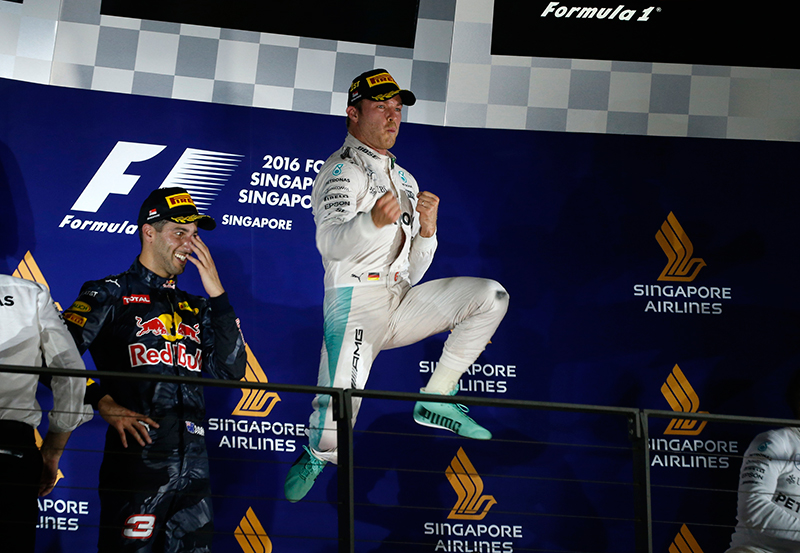 Rosberg's eighth victory this season makes him the first non-World Champion to win at Singapore, and puts him at 273 points compared to Hamilton's 265. No one else is in the running, but third-placed Ricciardo gave himself more room ahead of fourth-placed Vettel.

Mercedes can claim the Constructor's Championship in two weeks in Malaysia with a one-two finish. Second-place Red Bull would need one-two finishes at the final six races and for Mercedes to score less than 36 points over the same span to win the Championship. So... those are the stakes. We'll see you then.