I rode in the Tesla Model 3 tonight

By tomorrow, there will be 850 stories just like this one on the Internet. I don't care. I got to ride in the Tesla Model 3 tonight, and that's worth sharing.

The opportunity presented itself at the unveiling of the $35,000 Model 3 at the SpaceX facility in Hawthorne, California. There were about 850 people invited, including our friends Gisli Gislason and Who Killed The Electric Car? director Chris Paine. Everyone there, it seemed, wanted to hop into the Model 3 for a ride, so everything was kept short and on some sort of schedule. Tesla wasn't letting anyone but the paid drivers behind the wheel, so we all made due with our three minutes as passengers in the world's current It car.


We said interest in this car was high. I think we underestimated.

How hot is the Model 3 right now? Well, initial response to the design has been overwhelmingly positive and Tesla CEO Elon Musk announced from the stage at the end of his 25-minute presentation that there had already been 115,000 pre-orders. An hour later, after my test ride, there were over 133,000 and new ones were coming in at roughly one per second. That means that, as of this writing, Tesla made $133 million in $1,000 pre-orders in one day. As we said before the unveiling, interest in this car was high. I think we underestimated. 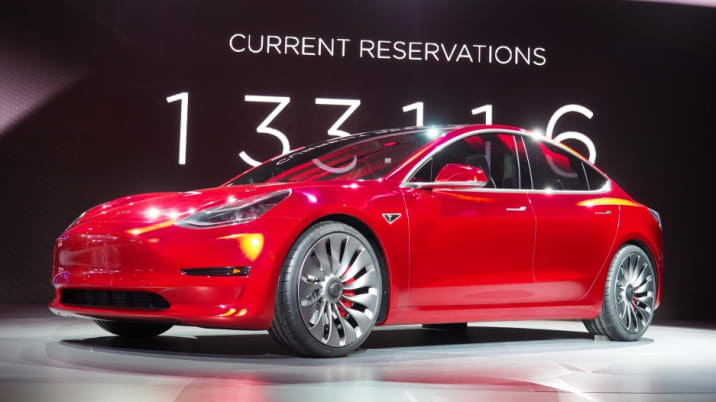 But back to our review of our 180 seconds in the car. This was not a base model, so the one quick burst of speed that I got to experience is not going to be the norm for buyers who fork over $35,000 for the base model. Details about which options will be available and how much they'll cost were all absent from the night's proceedings. As you can hear in the video above, the driver said we were in a dual-motor prototype, so we were treated to a bit higher performance than the 0-60 in less than six seconds that Musk quoted for the base model. The driver also said that the 3 will be available as AWD, but when it's not operating in AWD mode, the 3 is RWD.

Tesla's impressive vertical touchscreen from the Model S and X has been transformed into a horizontal screen that dominates the dashboard in the 3. I only saw the navigation map screen with some music details on the right side. It looked impressive and functional, just like the screens in Tesla's other models, but I didn't get to interact with it at all.


I want to experience the 3 in daylight.

I want to experience the 3 in daylight, to see if the giant glass top is a good idea. When I drove the Model X recently, I was glad that it had an aftermarket tint on the giant glass canopy above the front seats, because sometimes you just want a bit of protection from the sun. To have basically the entire roof be made of glass, well, I'm not sure that's ideal. Maybe this is a way for Tesla to sell more branded hats. At night, though, and on cloudy days, glass this big just screams spaciousness, and it's amazing. Luckily, the 3's all-glass top is an option, and not one I'd choose.

Of course, since all of the cars on hand tonight were early prototypes, who knows what details will change by the time the Model 3 goes on sale at the end of 2017. But, well, this is what it was like to ride in a Model 3 tonight. Get ready for 850 more versions of this story tomorrow and, soon, at least 133,000 more. And then even more. Tesla wants to bring electric drive to the masses. Tonight was a big step in that direction.