And Tesla claims there are 115,000 preorders, which is madness. After a long wait, Tesla has finally unveiled the Model 3. It's what we were expecting (and hoping for) – a less-expensive, versatile, attractive five-seater with decent range and a low price. It rounds out Tesla's revised Secret Master Plan, as Elon Musk cheekily called it, that started with the Roadster, progressed to the Model S, and grew to encompass the Model X.

That's all fine, but did you catch how many preorders Musk said the company had received for the Model 3 by this evening? 115,000 – a staggering number. If you'll remember, each reservation to purchase a Model 3 requires a $1,000 (refundable) deposit.

Here's the other stuff you should really know about Tesla's entry-level electric vehicle. For one, Musk promises it'll ace every safety test category. All will be standard with Autopilot hardware (autonomous driving functionality) and Supercharging (very fast recharging) capability.

It'll also seat five real adults in comfort, as Tesla has squashed the instrument panel a bit and moved the front seats forward to clear rear legroom. To give a sense of airiness to the cabin, and also to gain some extra headroom, it'll have a roof made of two large panes of glass, with the windshield meeting the backlight just above the A-pillar. Neat. In case you surf, it'll swallow a 7-foot surfboard, apparently. 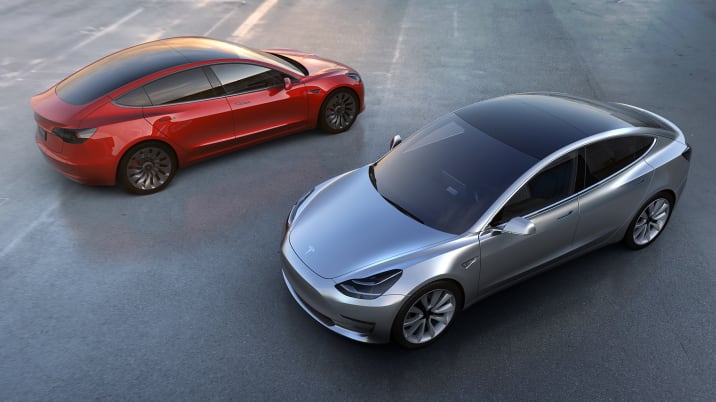 When Musk went over range and acceleration, he made it clear he was talking about the bottom-tier Model 3. Other models, he promised, would go faster and further. As it sits, the "base" Model 3 will get at least 215 miles on a charge and hit 60 mph in less than 6 seconds. "We don't make slow cars," Musk quipped. Musk is fairly confident the Model 3 can be delivered by the end of next year at the $35,000 price point. You are probably aware that new Teslas don't always arrive on schedule, so take the timing with a grain of salt.

How many Model 3s does the company want to sell? Musk seemed confident that he could ramp up both the Californian vehicle assembly plant and the new Gigafactory lithium ion battery facility to produce a total of 500,000 vehicles a year, including the Model 3. That's a very ambitious figure, but considering the number of deposits placed before the car was even revealed, maybe you shouldn't bet against the man.

Update: You can watch the full reveal video here: