View All Specs
Ventriloquism on the radio, a Donald Trump charm school, or binoculars for bears are things so pointless and irrelevant they almost defy you not to like them. Range Rover's Evoque cabriolet is another. A ragtop sport utility vehicle? Oh boy, who thought that one up? And at this point, I'm really still trying to forget Nissan's unlamented Murano CrossCabriolet.

"Oh ja, the car we all really need," joked one German PR representative when the Evoque cabrio broke cover last year, though the joke was on the other foot at the Geneva Show in March, when VW debuted the T-Cross Breeze concept, a design so astonishingly similar to the Evoque's, you wonder why Land Rover hasn't taken legal counsel.

The Evoque is, of course, Land Rover's surprise hit of the 21st century. It all started in the Motor City in 2008, the year of Land Rover's 60th anniversary. In celebration, the company produced the Land Rover LRX, a wedge-shaped SUV hybrid designed by Julian Thompson, with a sumptuous cabin by Mark Butler. It was this car that became the 2011 Evoque, based on the Freelander 4x4 chassis, with new independent suspension, Ford four-cylinder engines, and "RANGE ROVER" spelt across the bonnet. This was a kind-of boutique, concept car for the road. Its flaws were manifest: cramped rear seats, high curb weight despite lots of aluminum coachwork, a really high sticker price, and a lot less technology than the LRX had initially promised. But East and West Coast urbanites tore each others' eyes out for it. And like the first Renault Scenic, or the Mazda MX-5 when they were new, the Evoque had no competitors; if you wanted an Evoque, you had to go to Land Rover. 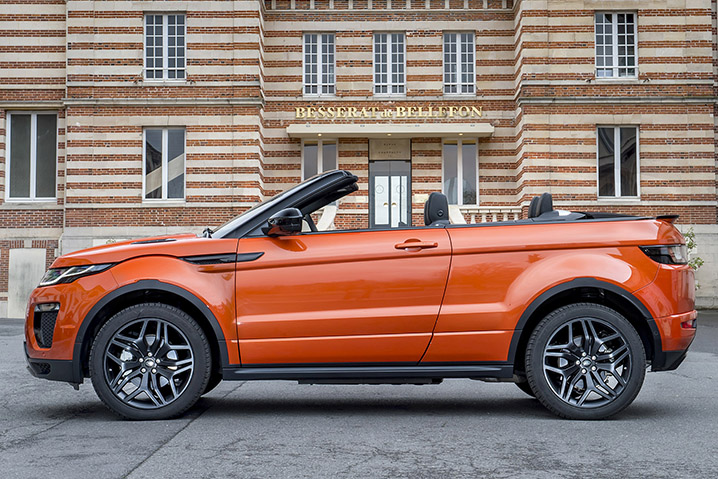 Remove the roof, add strengthening, and the Convertible weighs 615 pounds more that the standard three-door Evoque.

Land Rover has struggled to meet demand for its baby Rangey ever since. Currently its Halewood plant near Liverpool works a three-shift, 24-hour-a-day operation to slake the world's thirst for the Evoque and the new Discovery Sport. In February, the half millionth Evoque rolled out of end-of-line inspection and like any other premium manufacturer, Land Rover needs to keep the public interest boiling with new models, colors and, um, this two-door cabriolet.

Clearly, cutting the aluminum roof off a car never designed initially as a cabriolet demands some planning and substantial chassis reinforcement. So while the Evoque Convertible goes on sale in the States this summer (prices start at $50,475) it is currently in what is known as "ramp up" at Halewood, where a new car pops off the line every 80 seconds. To cope with the additional assembly required, the cabrio spends an additional 26 minutes on a circular siding off the main production line, while a specially trained team of six fit the Webasto-made folding top assembly and 441 pounds of underbody strengthening including reinforcement for the A and B pillars, diamond braces under the body, and an all-steel sump guard. Remove the roof, add strengthening, and the Convertible weighs 615 pounds more that the standard three-door Evoque. Fitting complex electric soft tops is a complex and difficult process, especially when they are as big as the Evoque's. "One of us has to sit in the car for 20 minutes tightening the back of the hood bolts in order and then the seat fixings," team member Les Woods told me.

The canvas roof furls behind the rear seats in 18 seconds and will deploy at speeds up to 30 miles per hour. Body changes (aside from cutting off the roof) are minimal – there's a rear trunk spoiler and a slightly deeper front fender assembly with larger cooling ducts. Standard halogen headlamps can be replaced with LED options. To protect passengers in the event of a rollover, twin aluminum roll bars behind the rear seats will deploy in 90 milliseconds. The trunk has just 8.86 cubic feet of cargo space, about big enough for a couple of airline carry-ons, and there's a ski hatch in the rear seats, though you have to bend down to load through the mailbox-type trunk lid. 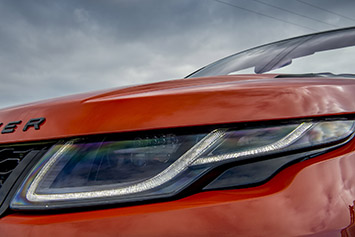 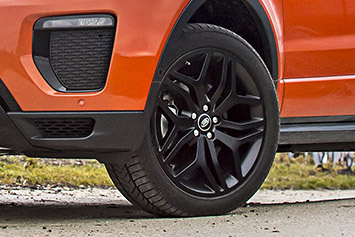 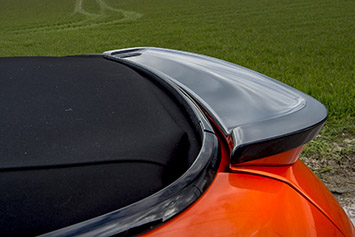 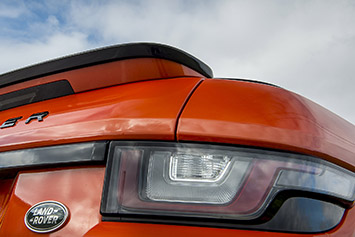 US customers get the same 2.0-liter turbocharged four-cylinder petrol engine from the standard Evoque, with 240 horsepower and 250 pound-feet of torque.

Evoque carryovers include the driver assistance packages, including the 360-degree parking control which virtually monitors all round the car, autonomous emergency braking, lane-keeping assistant, and driver alert warning. There's also the updated Jaguar Land Rover InControl 10.2-inch color touchscreen display in the center console, and the system provides a wifi hot spot and the ability to download apps from your smartphone.

Although a turbodiesel option is available in Europe, US customers get the same 2.0-liter turbocharged four-cylinder petrol engine from the standard Evoque, with 240 horsepower and 250 pound-feet of torque. It's an all-aluminium unit with twin balancer shafts for smoothness, although performance in the 4,268-pound cabrio is well down on that of the standard three-door tin-top. Top speed is quoted at 130 mph (135 for the standard Evoque), with 0-62-mph acceleration coming in at 8.6 seconds (one second slower than the normal car).

The engine is mated to a ZF nine-speed automatic transmission, which the Evoque has used since 2014. Power goes to all four wheels and US models get the GKN rear axle with two additional clutches on either side of the differential unit, which can disengage to give two-wheel drive for economy, or actively overdrive each rear wheel to push the Evoque through turns. It's similar to the system fitted to the Ford Focus RS, but without the hot Ford's drift mode (now that would be something). 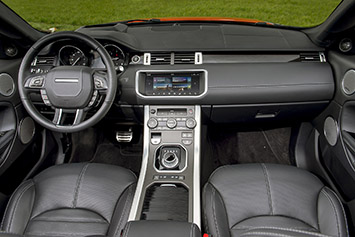 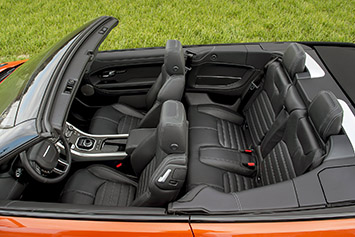 The Evoque Convertible can tackle 45-degree gradients head-on and 35-degree slopes sideways, and will happily splash around in up to 19.5 inches of water.

Unlikely as it might seem, Land Rover seems to think some owners might take their Evoque Cabriolets off the beaten track and have tested it to the same standards as all Range Rover models. While it might be of little interest to the average big-city attorney owner, the Cabriolet gets all of the go-anywhere electronic paraphernalia such as switchable Terrain Response, and it has approach, breakover, and departure angles of 19, 18.9, and 31 degrees, respectively. The Evoque Convertible can tackle 45-degree gradients head-on and 35-degree slopes sideways, and will happily splash around in up to 19.5 inches of water. Hill descent control and gradient release control are also standard fitment, just in case you find yourself stranded at the top of the Rockies.

What's it like? Well, you feel pretty exposed with everyone looking at you in this extraordinary car. The choreographed whirring of the folding hood will draw a crowd even in the middle of a field. But dropping the top removes the massive blind spot the erect roof makes over the rear three quarters. Start her up and it's pretty clear that adding effectively four passengers to the curb weight hasn't done much for the performance or the handing, although overall refinement is really pretty good, and even at interstate speeds, you aren't forced to raise your voice in conversation. The engine gives brisk rather than speedy performance and the gearbox, while not the best nine-speeder in the business, isn't as clunky as it is in the Discovery Sport. 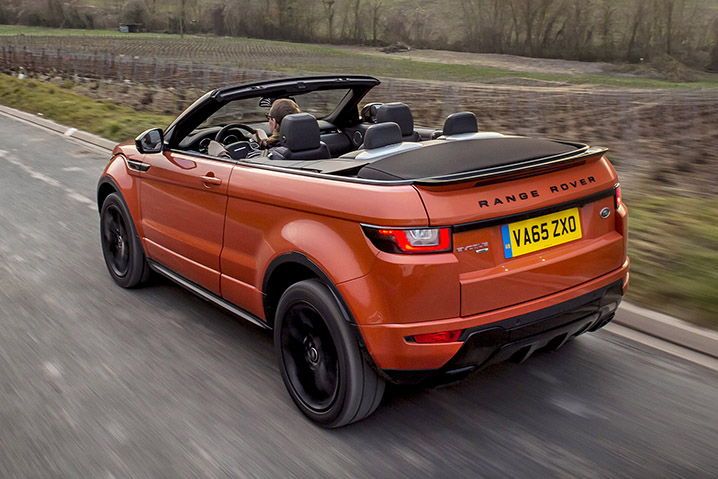 While the Evoque Convertible isn't nearly as dynamic as its tin-top sister, it's a pretty respectable four-seat convertible.

The Evoque's shell is fairly rigid, but these is a slight shake and vibration from the bodyshell, especially on concrete surfaces where the top's glass rear window shimmers gently. Our test car was shod with Pirelli winter tires that tackled most surfaces quietly, but the suspension is a bit one-dimensional with tendency to crash over bumps and through potholes. Body roll is well controlled, though. We drove it 1,000 miles across the UK and France through terrible weather and along some dreadful roads, and all the way, the roof remained tight against rain, sleet, and snow, and commendably flap free. The heated leather seats were comfy and warm, and the heater mercifully powerful. We rather enjoyed it, actually, and while the Evoque Convertible isn't nearly as dynamic as its tin-top sister, it's a pretty respectable four-seat convertible.

And as for the charge that it's a useless white elephant, that depends where you start from. No one really needs a cabriolet SUV, just as no one needs most of the stuff with which we pack our lives. But the Evoque Cabriolet also does the job of being an automobile sufficiently well to make you think (just a bit), that you'd actually rather like one of these. So don't think "why" – think, "why not?"