With Spectre On The Horizon, We Drive One Of 007's Past Rides View All Specs
Spectre is nearly upon us, the next episode in the James Bond series bringing with it a conceptual peek at the future of Aston Martin courtesy of the DB10. As for how much Bond's new ride predicts the DB11 that will be offered to civilians, "elements" is the most concrete word we've heard to describe the bridge from one to the other, and that doesn't tell us much.

Still in the dark about where Aston Martin is going, we recently got the opportunity to remember where it's been. Some friends of Autoblog at Regency Car Rental in LA told us we could borrow their 2005 Aston Martin Vanquish S, so we spent the day hunting nefarious types on twisty Malibu roads, then cruising the Valley looking for a tuner shop that could install a minigun.

The Vanquish played a role in the 2002 film Die Another Day, back when Pierce Brosnan made a living as the roguish, rakish MI6 asset. The film rekindled the union between the agent and Aston Martin after a three-movie interlude in which Bond drove BMWs, including, oh-so-briefly, a Z3. Returning with a bang – make that thousands of large- and small-caliber bangs – Q Branch fitted the hero car with rockets, guns that could shoot incoming projectiles, machine guns, an ejector seat, and invisibility camouflage. 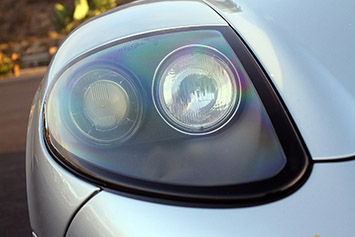 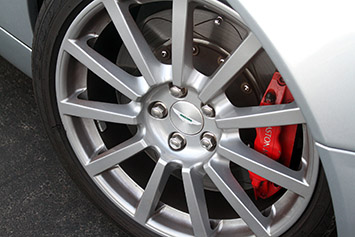 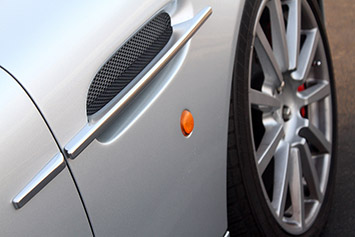 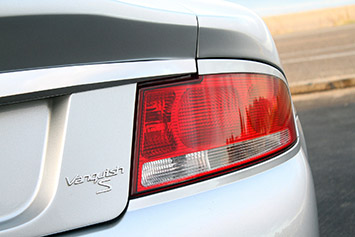 On the chicest streets in the sleekest LA neighborhoods the Vanquish S still passes the look-at-me test.

The Vanquish S we picked up from Regency didn't have any of that, but as indicated by that S at the end it did have more power and performance than the standard Vanquish in the movie. Horsepower from the 5.9-liter V12 went from 460 to 520 in the S, and this model also got stiffer springs, new suspension geometry, quicker steering, and 19-inch lightweight wheels. Exterior modifications were a wider, more curved grille, a front splitter (not present on this car), and a larger rear spoiler.

On the most chic streets in the sleekest LA neighborhoods the Vanquish S still passes the look-at-me test – everywhere we went, men and women paid attention to our arrival. As for us, we're split on its looks right down the middle of the car. We've been fans of the front since the day of the reveal, especially the front fascia and headlights, but we're still not sold on the rear, starting from where the vertical line in the door where the sheetmetal expands into those trademark haunches. We didn't encounter anyone else with such reservations. We answered questions about it all day, the admiration this ten-year-old coupe elicits best exemplified by the guy in a Fiat 500 who stopped his car in traffic to make inquiries. Another note of respect: we found that slower traffic in the left lane will always get out of your way.

It's hard not to notice the Vanquish S for another reason: its volume. Before the days of the crystal Emotion Control Unit, the fire-up sequence began with a traditional key inserted into a traditional ignition and turned to the 'On' position. Pull both shift paddles to engage neutral, place your foot on the brake, push the Start button atop the center console. That naughty sounding V12 emits explosions lined in velvet, revving to life in the way of old, as if you'd thrown your leg over it and kick-started it. 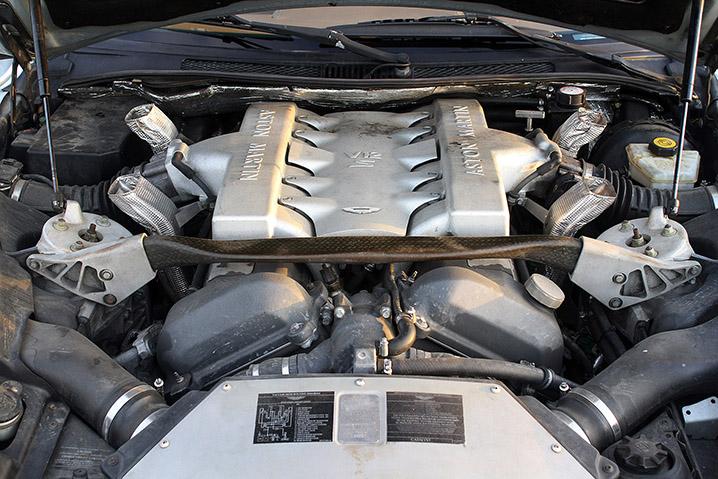 The gearbox transmits muted sound of its chores from the rear transaxle into the cabin.

In contrast to modern hi-po GT cars including the current Vanquish, it is not much quieter on the go, outside or inside the cabin. However, a few minutes of settling is all it takes to realize that the 2005 version is a capital balance between superfine luxury and beastly sports car engagement – something that's missing from a lot of modern metal.

The Vanquish S has two weak spots, the first being the transmission. Understand that it is from the early days of consumer-facing electrohydraulic-shifting automated manual transmissions, and they were universally bad. The sample in the Vanquish S is a touch industrial – noted all the more so because the coupe is so polished nearly everywhere else. Shifts are quick and downshifts are subtle, but upshifting is slow to happen in automatic mode, it is challenging to do smoothly no matter how you toy with the throttle or the paddles, and the rear-mounted transaxle transmits muted sound of its chores into the cabin. We were pleasantly surprised to find that the car always starts in manual mode, though; you must press the "ASW" button above the center console to have it shift for you.

Ford owned Aston Martin when this Vanquish was developed, and that's how you get the second weakness: the center console. It is unbecoming of a $255,000 coupe. Credit to Fordthat it gave us the rest of the car around that console and all the enjoyment within, so in spite of appearances, we really aren't complaining too much. 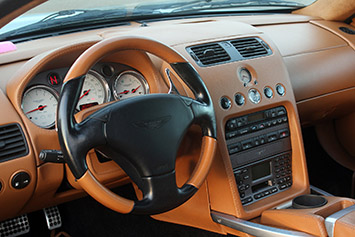 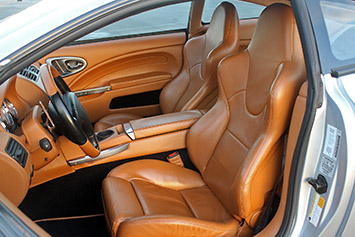 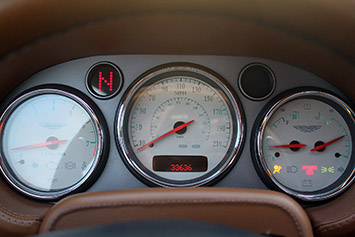 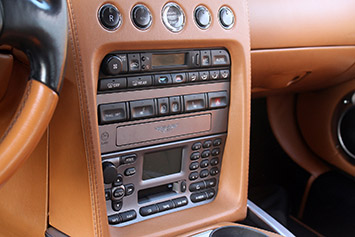 The sound it produces when you lay on the throttle is narcotic, such that even a hard charge to a 45-mph speed limit will overload every nerve.

The brakes, grown to six-pot calipers up front on the S instead of the four-piston units on the standard Vanquish did not enjoy the workout they got when run hard up a couple of canyons, emitting the pungent odor of brake pad every time we gave them a rest, then shuddering while hot. It's unlikely they'd be put off that badly by the 4,125-pound curb weight, it's more likely that because this is a private-owner car with 33,500 miles on it being loaned to a rental car company. This car has never spent a full day pretending to chase the supervillain Zao from Die Another Day.

But it would take more than those three ruffled feathers to interfere with the impressiveness of this English raptor. The Vanquish S is unquestionably good, even by today's standards. Excluding that console the interior is gorgeous, seemingly the result of a contest to see how many surfaces they could cover with hand-stitched leather. The instruments are beautiful, and we prefer them to the chronograph-inspired gauges in today's Aston Martins. The elegant seats are slightly narrower than modern thrones, but comfortable and supportive, and we wanted to run our hands over the leather every time we got in the car.

With 80 percent of its 425 pound-feet of torque ready at 1,000 rpm and 520 hp on slow release up to its 7,000-rpm redline, the Vanquish S is eager on the gas. The sound it produces when you lay on the throttle is narcotic, such that even a hard charge to a 45-mph speed limit will overload every nerve. It will also notify every officer within a mile to rush to the scene. 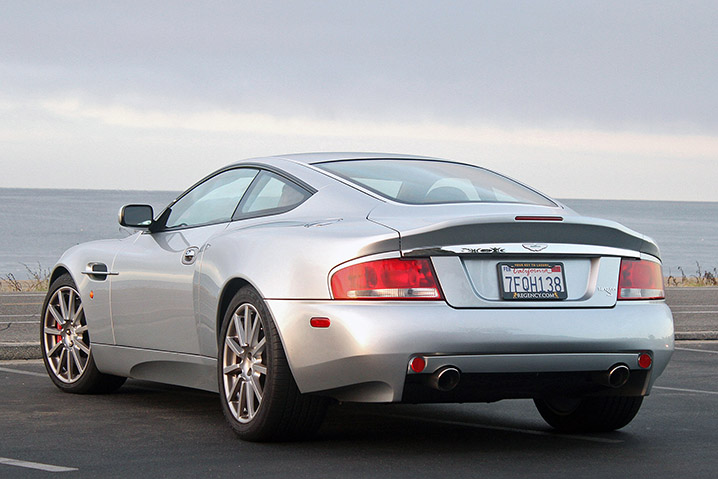 We didn't expect to like the Vanquish S as much as we did, nor did we expect to find it so up-to-date.

The suspension is ace. The revised damping and stiffer springs hold the body in check and soak up harsh bumps surprisingly well. Up those canyons, the Vanquish S keeps its two-plus-tons out of the way. The steering is heavy at all speeds, but turn-in is balanced. Leave the suspension to its work while you focus on getting that long nose and 255/45 front tires pointed where you want. You can steer with the throttle, too; the 285/40 rear rubber provides huge grip, yet the back end will slide around gracefully just beyond the adhesion limit.

Honestly, we didn't expect to like the Vanquish S as much as we did, nor did we expect to find it so up-to-date. This coupe established the baseline for the DBS and Vanquish to come after it, and those two successors haven't strayed far. The current Vanquish has finer detailing, but still uses a 5.9-liter V12, now with 569 hp and 465 lb-ft, weighs 3,833 pounds, and gets from 0-60 mph in 3.6 seconds. Based on those stats, the easy accusation is that the 2005 Vanquish S is unkind evidence of Aston Martin's progress in the last decade. There is truth to that, and there are reasons for it. On the other hand, since the Vanquish S is still an unquestionably good car, it could be fairer to say that we wish Aston Martin had had the resources to do more with it and its successors.

What can't be argued is that we're glad we got to drive it, and when it comes to his Aston Martin vehicles, James Bond has always had it good. So bring on Spectre and the DB10. And for us, the DB11. And if you end up in Los Angeles and want to channel Bond yourself, well, you know who to call. 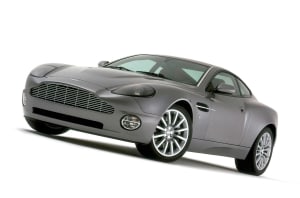