It's called the Red Bull Ring, guests are welcomed by a statue of a leaping bull, and dominating its layout demands powerful cars that can run it hard. Perhaps all that aggression is what led both Mercedes-AMG Petronas cars to run off the track in the final qualifying session on their final hot laps, a little too aggressive on the charge. Lewis Hamilton was first into the gravel at Turn 1 when he lost his car under braking, but he was still fast enough to get pole ahead of teammate Nico Rosberg, who spun at Turn 8. Rosberg started second.

Or perhaps it wasn't the red bull but the scarlet horse that caused The Silver Arrows to muck it up: Ferrari driver Sebastian Vettel had Mercedes' attention all weekend, and he'd line up in third just 0.355 off Hamilton's time. Williams truly rediscovered its power, Felipe Massa going fourth fastest, teammate Valtteri Bottas in sixth. Between them was newly-minted Le Mans winner Nico Hülkenberg, yet again – can we say that enough? – pulling the still-not-updated Force India to fifth place on the grid.

Max Verstappen led the Renault-powered top-ten duo in his Toro Rosso in seventh, Infiniti Red Bull Racing driver Daniil Kvyat behind him in eighth. Kvyat, however, would start down the order because of a ten-place grid penalty for needing a fifth Renault engine. After that it's back to Mercedes Ferrari power, Felipe Nasr in the Sauber in ninth, Romain Grosjean in with Mercedes power in the Lotus in tenth – but fellow Lotus driver Pastor Maldonado actually started in tenth because of Kvyat's demotion. 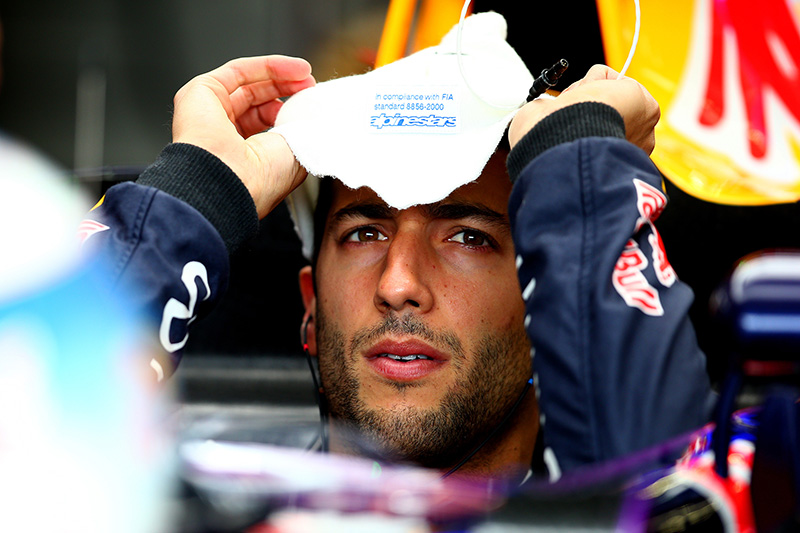 Before we get to the race, can we take a moment to talk about the shenanigans and gaudy penalties? Kimi Räikkönen waved the Ferrari flag in Canada after a season that's been full of "We didn't get it right this time," and we thought he was back. But no. In Austria the refrain returned, the Finn kicked out of Q1 after another miscommunication with the team – he qualified 18th. If the scenario plays to form, we'll now wait for team boss Mauricio Arrivabene to issue a clarification that suggests Räikkönen missed a step.

Daniel Ricciardo parachutes ten spots back for the same reason as his teammate Kvyat, needing a fifth Renault power unit, dropping him to 18th on the grid and forcing him into a five-second time penalty when he comes in to pit.

McLaren will one day laugh at its wretched start to the season, and right now they'll hope Austria was the low point: 25-spot grid penalties for both Jenson Button and Fernando Alonso because of multiple power unit and gearbox changes. As F1.com put it, that's "an all-world champion back row." Then Alonso had to serve a drive-through penalty in the first three laps, and Button had to serve a ten-second stop-go penalty.

Räikkönen came out the big winner, moving four spots up the order after the penalties were factored in. Yet he was one of the biggest losers when the race began: the Finn got loose in Turn 3 on the first lap then speared to the left as he was trying to recover and drove into Fernando Alonso in the McLaren, who had juked to the left while trying to avoid the Ferrari. Wheel-to-wheel contact yanked the McLaren up onto the Ferrari and both cars slid down the guardrail locked together. The drivers, thankfully, were both fine. And Alonso didn't have to serve his drive-through penalty.

After a six-lap Safety Car period and 64 laps of racing we found out who the other big winner was: Nico Rosberg. In the 11 years the German has been part of the F1 troupe, we still haven't got a bead on him. His talent and work ethic are beyond question, but we never know which mental state he's going to bring to a race weekend. He decided to bring his champion's psychology to Austria, capitalizing on Lewis Hamilton's clutch issue at the start to take the lead into Turn 1 and keep it to the end of the race. His only misstep was an overly hot pit entrance for his one stop, which he made up for with a fastest lap upon emerging with new tires to keep his race lead safe. Crossing the line nearly nine seconds ahead of Hamilton was the kind of performance we expect to see from the Brit, but which we hope to see from Rosberg more often.

As for Hamilton, he couldn't get closer than 3.5 seconds to Rosberg on track, then squashed any chance of victory when he crossed the white line out of the pits and got hit with a five-second penalty added to his final time. 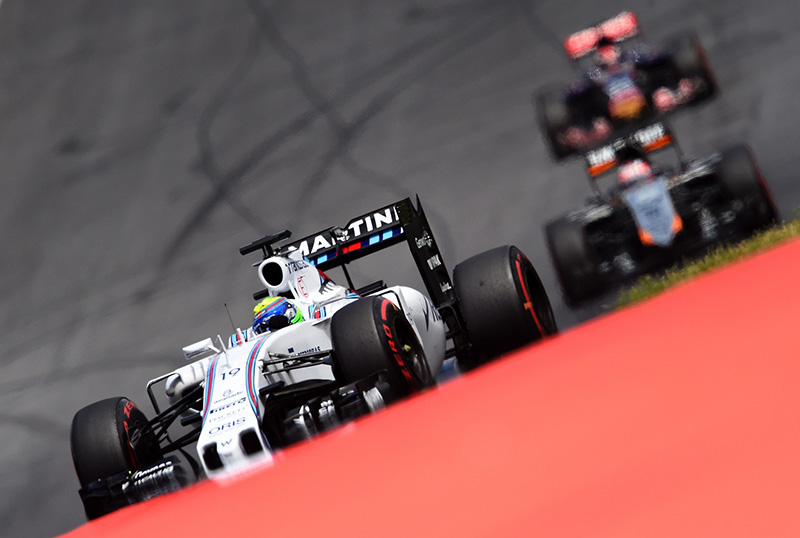 Both Williams drivers graduated one position from the grid to the checkered flag, Massa taking advantage of a poor Ferrari pit stop to leapfrog Vettel and claim third place. Vettel was hard on the Brazilian's gearbox for the final five laps but couldn't get by under braking and couldn't force the skillfully defensive Massa into a mistake. Behind them came Bottas, going from sixth to fifth after having to pass Nico Hülkenberg in the Force India twice – once in the first stint and once after his pit stop. Hülkenberg, in sixth, still put in a strong showing in a car lagging behind its rivals and secured vital points for Force India.

By bringing his Lotus home in seventh, Pastor Maldonado scored a points finish in two consecutive races for the first time since November 2012. Having spent a few years earning several nicknames involving the word "crash," and narrowly avoiding a couple of those in his late-race battles with Max Verstasppen, this could just maybe be the return of dormant form for the Venezuelan. 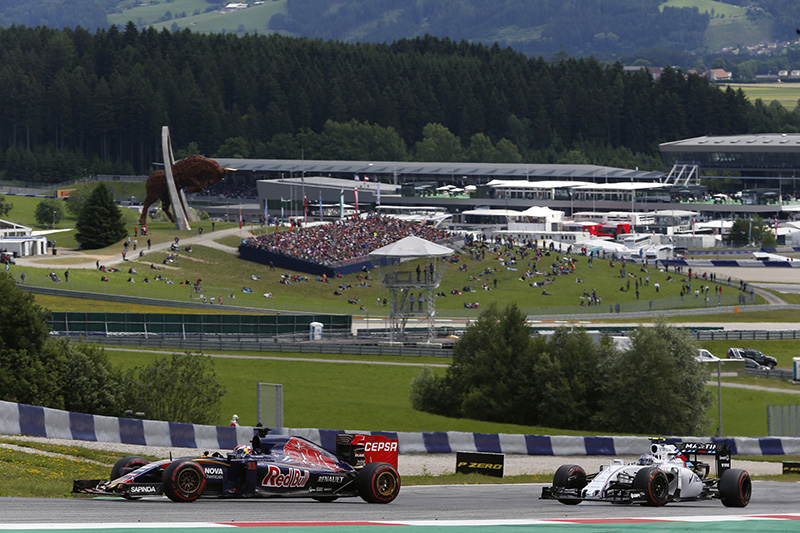 Verstappen finally overcame a long run of poor reliability and one rookie mistake to earn his second points finish of the season with an eighth-place finish. Although less consistent than teammate Carlos Sainz, Jr., the Dutchman has more points – ten for him, nine for the Spaniard.

Sergio Perez got the second Force India to the finish in ninth, ahead of Daniel Ricciardo dragging his Red Bull home in tenth. Want to know how bad things are for Red Bull this year? Force India has outscored the formerly all-conquering team in the last two races, and the much smaller team is now just 24 points behind the well-funded outfit. Red Bull is doing battle with the midfielders in the Constructor's Championship right now, since Williams in third place is 74 points ahead of it. 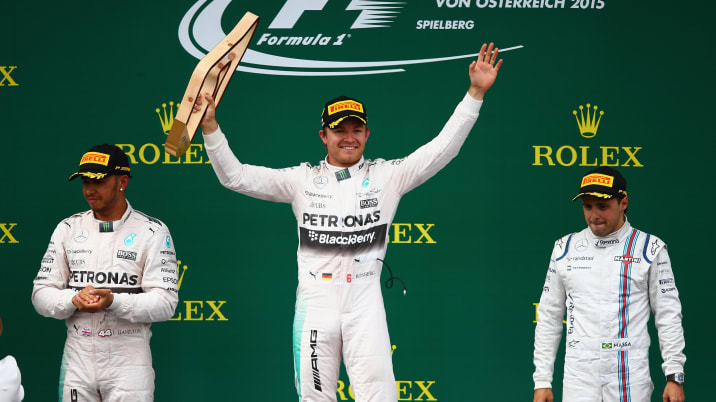 Rosberg's victory gets him to within ten points of Hamilton in the Driver's Championship, 159 points for the German, 169 points for the Brit. Vettel is in third place with 120 points. In the teams' race, Mercedes scored its fifth one-two out of eight races, stretching its lead out to 328 points, Ferrari in second with 192 points, Williams with 129 points.

Most of the teams will hang around in Austria for an in-season test, and then pack up for the British Grand Prix in two weeks, where Hamilton will be hoping to re-establish his previous form in front of his home crowd. We'll see you then.