How and why automakers work hard to camouflage their cars

Carmakers assign engineers to be in charge of developing bespoke camouflage for each new model.

We've all see those photos of hotly anticipated upcoming models wrapped in black padding and crazy checkerboard and swirl patterns, and maybe wondered if all that is really necessary.

It is no off-the-cuff exercise; carmakers assign engineers to be in charge of developing bespoke camouflage for each new model. They work in conjunction with the vehicle's designers to erase character lines almost as soon as they are drawn. It is important to keep future products secret, to avoid undercutting the sales of current products and to build anticipation of the new product.

"We like to save the big splash for when things come out looking beautiful and pretty," noted Chevrolet Volt chief engineer Andrew Farah, pictured above. Indeed, the hazard of premature release of not-quite-done prototypes was illustrated by the online backlash that erupted against the Jeep Cherokee when unflattering photos of unfinished prototypes leaked in advance of that vehicle's debut.

Stopping that is hard to do when your product is 15 feet long and needs to be extensively tested outdoors and in public during its development. That need, combined with carmakers' tendency to rely on the same testing venues time after time create the environment for automotive paparazzi photographers who rival celebrity shooters for their ingenuity and persistence. 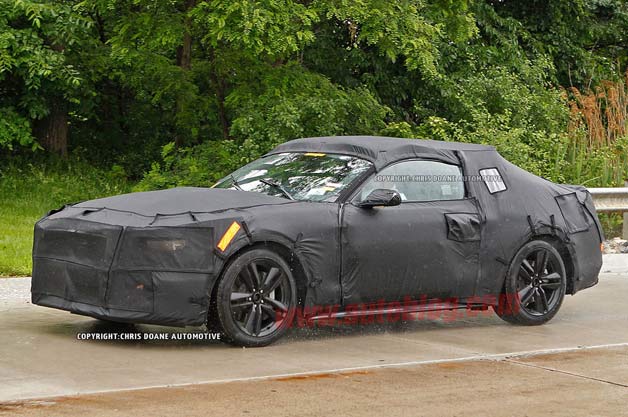 An employee at one of Ford's suppliers with knowledge of the Mustang test leaked it to a dedicated spy photographer.

The 2015 Ford Mustang was caught in the wild by one such photographer when it rolled off the truck with its front end undisguised for track testing prior to launch, recalled chief engineer Dave Pericak. Ford rents racetracks, often under false names and pretense, to minimize the risk of being caught, but in this instance, an employee at one of Ford's suppliers with knowledge of the test leaked it to a dedicated spy photographer, he said.

That spy shooter arrived at the track a day early and hid in the bushes at the end of the day, waiting overnight for the Mustang's arrival. Before unloading the car, Ford security detail checked the track's perimeter for watching eyes, but didn't beat the bushes of the interior.

"Sure enough, photos showed up on the internet a few days after that," Pericak winced. Result? "I got called in to the VP's office to explain how that happened," he said.

Such leaks are the exception, rather than the rule, however, because of relentless attention by new cars' engineering teams. 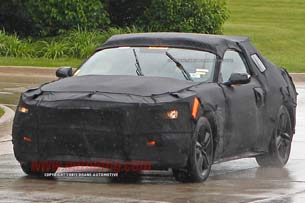 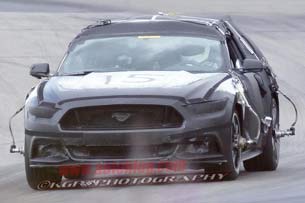 Carmakers apply checkerboard-patterned adhesive vinyl to try to "fool the eye into not seeing what is there."

Those engineers work with cars' designers from the beginning to identify key attributes the company wants to hide, said Farah. "We agree there are certain aspects of the vehicles we want to work hardest to camouflage and we will develop a package to address those areas," he explained. In the earliest testing, new hardware might run beneath an existing car's bodywork – known as a mule – just to sort out fundamentals. But as the car progresses toward production, it is important to test it in increasingly complete form, Farah said.

When the new bodywork is fitted, at first engineers cover it with hard plastic and soft foam, to bury it out of sight. Later, that has to be peeled off for more realistic testing of things like aerodynamics and wind noise, so carmakers apply checkerboard-patterned adhesive vinyl to try to "fool the eye into not seeing what is there," said Pericak.

That early bulkier padding hides the car effectively, but it also interferes with testing, especially for a fast car like the Mustang. "I can't drive 155 miles per hour with the camouflage on the car," he noted.
But even cars wrapped in padded cladding can reveal useful information about upcoming models, according to veteran lenswoman Brenda Priddy. "Window glass and rooflines are often telltale signs of things to come," she tells Autoblog.

Once all the testing can be done with the padding attached is complete, that means stripping down to just patterned vinyl wraps. This is where new car development meets the body paint section of Sports Illustrated's annual swimsuit issue, with readers poring intently over photos, trying furiously to discern what lies beneath. 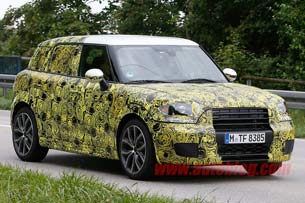 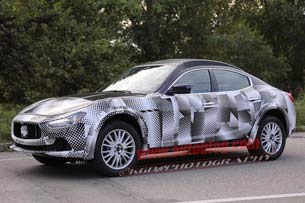 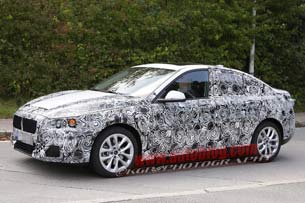 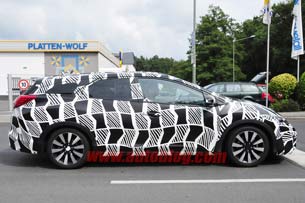 "You've gotta fool the eye, the camera and the software." – Dave Pericak

"The patterns we use have evolved over the years, just like the camouflage the military has used has evolved," Farah said. "As the years have gone by, the pattern has changed at least three times."
Effectively hiding character lines in bodywork is the opposite of the process of creating them in the first place, he said. "When you think about solid [computer] modeling, the trick is, 'Where are the feature lines?' It is hard to model them well, so you can put the shadows in the right places and get a non-flat image."

The object of camouflage is to re-flatten that image so that character lines disappear. If engineers can hide those lines from the human eye, computer software will also be fooled, making it harder for spies to erase camouflage in software.

"You've gotta fool the eye, the camera and the software," Pericak said. It takes multiple iterations to achieve that while leaving the bodywork in a useable configuration.

But that same camouflage also draws attention to cars that could otherwise be overlooked. "Basically, those wraps yell out, "Here I am!," Priddy observed. "Contrary to what some of the camouflage designers believe, the contrast [patterns], usually black and white designs, are easy for cameras to focus on, and very simple contrast adjustments in Photoshop-type programs to bring out the car's 'hidden' contours." 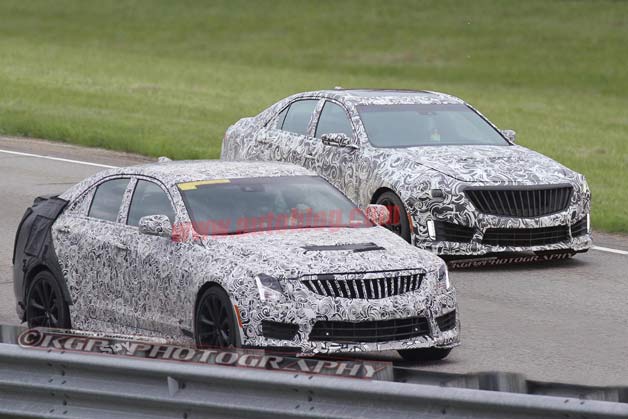 "The contrast [patterns], usually black and white designs, are easy for cameras to focus on." – Brenda Priddy

Priddy says that she doesn't generally engage in trying to produce computer-generated guesses of the underlying car's appearance, because with a bit of contrast applied, readers can usually see enough in her photos of camouflaged cars.

Which is why engineers work double time on improving their deception. "We must have gone at that camouflage a dozen times or more," Pericak said. Early versions didn't intrude excessively on what was being tested, but they failed to hide the new styling sufficiently, as Priddy described. "Great, but they can still see half the car!" Pericak told his team. Finally they achieved the necessary balance. "It's an art and a science," said Pericak.

Fans and spies are especially keen to see new cars' front ends, as illustrated by the Mustang spy shots from the racetrack.

"It is all about the eyes, the face of the car," Farah stated. "You want to put some kind of mask on the front end so it is difficult to tell what is going on." 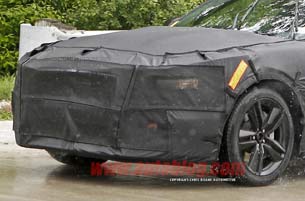 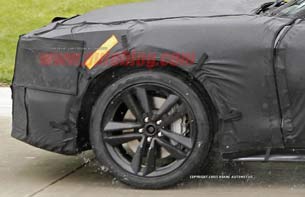 Cars are being developed with forward cameras and radars, so the camouflage can't interfere with those systems.

That would be easier to do if not for the matter of cooling the engine and testing climate control systems. "You don't want to screw up the airflow because then the powertrain team can't do what they need to do and the HVAC team can't test their systems," he said.

And now cars are being developed with forward cameras and radars for adaptive cruise control, collision warning and lane keeping, so the camouflage can't interfere with those systems when they are being tested.

In an age of omnipresent cameras, all this secrecy doesn't start when cars roll out onto public roads for testing, according to Farah. The cars are even disguised when safely ensconced inside the companies' development facilities. "As the car is being built, the camouflage is being put on in our prototype shop," said Farah. "We have it camo'd from the day it leaves the build building. Every day it is not camo'd is another day of risk." 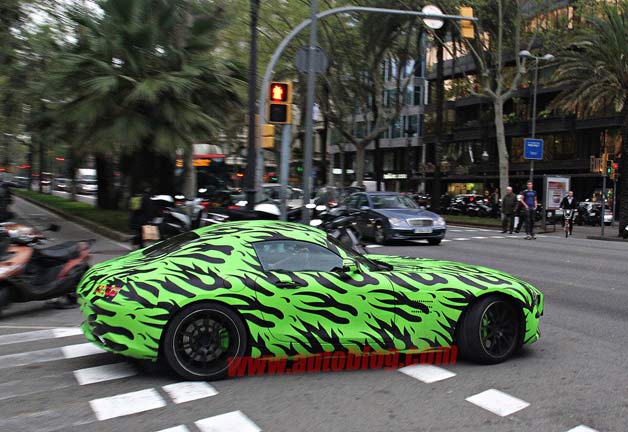 "We have people who literally hide out in trees to get the first shot." – Dave Pericak

Think that sounds paranoid? "Everyone wants to know what you are doing," said Pericak. "You can't imagine how insane it was to keep it quiet. We have people who literally hide out in trees to get the first shot."

And even if no cameras do see the cars and their components, plenty of eyeballs do, which contributes to the problem. "You've got attacks coming from all angles," he said. That's because while photographers are stripping away camouflage using software, those people who have seen the car or its parts can anonymously coach them through the editing process only. "I saw the taillights, and you are a little off," they might say, Pericak reported. "Then they might say, 'That looks more like what I saw.'"

"The minute you give them something to cue off in the photo the rendering software can get really close," he said. "In our case they got really close."