Thankfully, the weekend's Formula One dramas all concerned events that happened off the track, with both Caterham and Marussia going into administration, after which a rumored boycott by the small teams was avoided. That gave the 18 drivers left on the grid freedom to focus on making the most of the Texas sunshine for Sunday's US Grand Prix.

Having finished two Free Practices behind teammate Mercedes AMG Petronas teammate Lewis Hamilton, the second one just .003 behind, Nico Rosberg said he had speed in hand and proved it during qualifying, beating Hamilton to the top spot by four-tenths of a second. Williams drivers Valtteri Bottas and Felipe Massa came behind, followed by Daniel Ricciardo in the Infiniti Red Bull Racing, Fernando Alonso in the Ferrari, the McLaren duo of Jenson Button and Kevin Magnussen, Kimi Räikkönen in the second Ferrari, and little-team Sauber bursting out of the storm clouds into tenth, Adrian Sutil making the team's first-time Q3 appearance all year.

When it came time to race, the carbon-fiber fisticuffs began on the first lap. 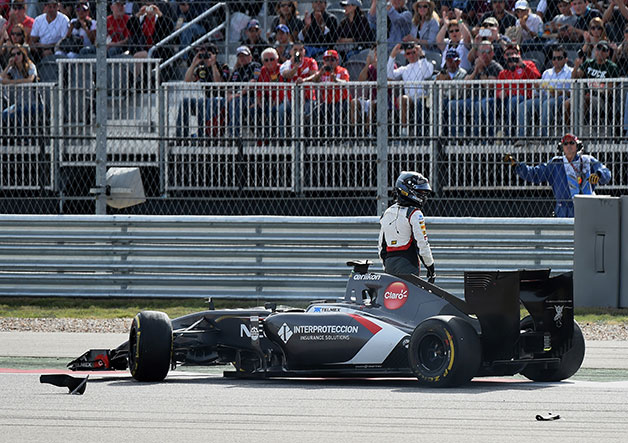 That's when Sergio Perez in the Sahara Force India tried to leapfrog up the pack from 12th position, but slid into the back of Räikkönen heading into Turn 14, then clobbered Sutil. The Sauber was out immediately, stuck on the kerb, pieces of it littering the tarmac. As Perez limped around to the pits, the Safety Car came out for three laps while recovery vehicles removed the Sauber. The Mexican, who retired in the pits, had two penalty points added to his license and will take a seven-place grid penalty in Brazil. 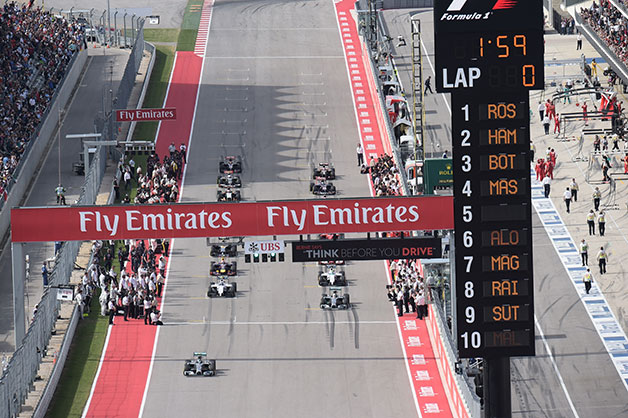 Up front, Rosberg and Hamilton were, as usual, getting away from the field. Massa had got around his teammate Bottas and tried to keep it game, but he was already two seconds behind Hamilton two laps after racing resumed, and six seconds behind eight laps later. 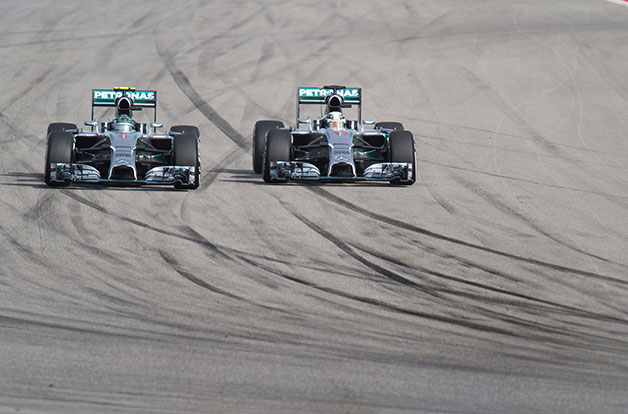 Hamilton shadowed Rosberg, staying around a second behind the German until after the first round of pit stops, when Rosberg's lead increased to 2.5 seconds on Lap 19. Over the next five laps, Hamilton hunted Rosberg down, taking chunks out of the lead, and on Lap 25 – after juking around in Rosberg's mirrors through a number of corners – Hamilton zoomed up the inside from a long way back into Turn 12, the two fought through the corner together, then Hamilton squeezed his teammate to the edge and claimed first place. Rosberg said he didn't defend as decisively as he could have, and he didn't get his ERS boost because he pressed the wrong button. But one lap later, Hamilton had got a 1.3-second gap on Rosberg, and that was the race - Rosberg never truly threatened him. Hamilton crossed the line first, 31 laps, later, Rosberg a touch more than four seconds back.

Mr. Revelation, Daniel Ricciardo did it again to finish in third, beating both Williams entries with brilliant passing and strategy. He got another one of his lackluster starts and slipped to ninth, but began retaking positions on Lap 1, slotting into his original grid position of fifth by Lap 5. He got past Bottas with an undercut during the first round of pit stops, taking fourth position, then did the same thing to Massa during the second round of stops, to take third. Even with the long straights at Circuit of the Americas, neither of the Martini boys could catch him and they finished in fourth and fifth, Massa preceding Bottas. 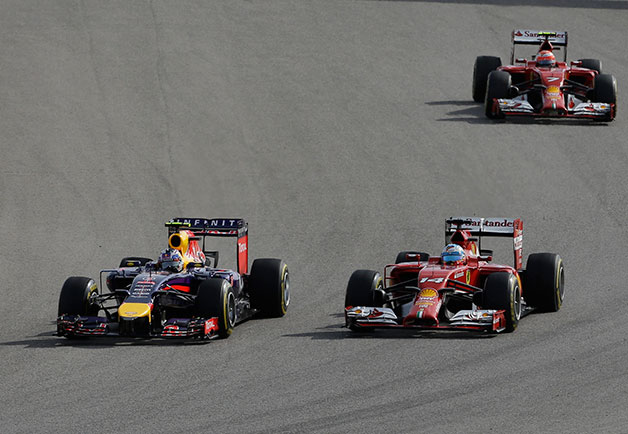 Alonso finished where he started, in sixth, after a mainly quiet race punctuated by passing binges after pit stops, fighting Magnussen, Button and Sebastian Vettel for numerous laps.

Vettel was bittersweet about his seventh-place finish. Starting from the pit lane due to a ten-place grid penalty over a power unit change, Vettel had shown pre-race pace that probably could have got him fighting in the top five. Yet after a strategy call that had him pit twice in two laps, his tires didn't want to work for him during the opening stint, and he was two seconds off his best. After his third pit stop he came alive, using another pit stop for new tires to work some tidy and sloppy on a train of cars on old tires in positions seven to 14. Magnussen crossed the line behind, the Dane, like Alonso, finishing where he started. 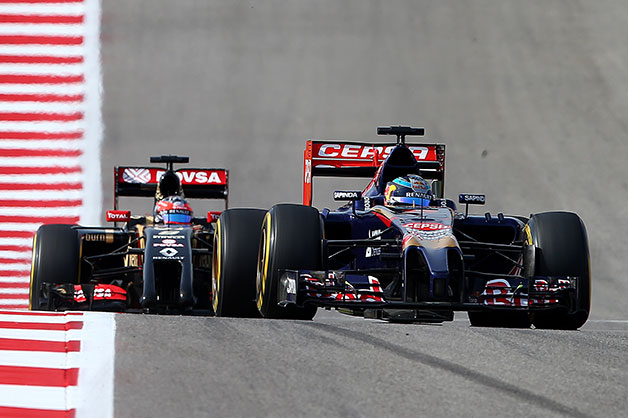 Toro Rosso's Jean-Eric Vergne, who has said he thinks he should stay with the team, and who incoming driver Max Verstappen wants to stay with the team, keeps making his case with drives instead of words. Vergne crossed the line in ninth, but he made contact during a wild pass on Romain Grosjean in the Lotus into Turn 1 on Lap 51, kicking Grosjean off track and back two places. The stewards added five seconds to his time, dropping him to tenth in the classification. Even so, if he had driven like this for the past couple of years, there's a chance he'd be at Red Bull instead of on the way out.

Pastor Maldonado, a name we haven't read in a while when it didn't have to do with crashes, crossed the line in tenth. He got moved up to ninth in spite of a five-second penalty of his own for speeding in the pit lane, but that got Lotus a welcome single point especially after Grosjean's incident. The penalty does, however, keep Maldonado at the top of the penalties-per-season table, a spot he's occupied three of the past four years. 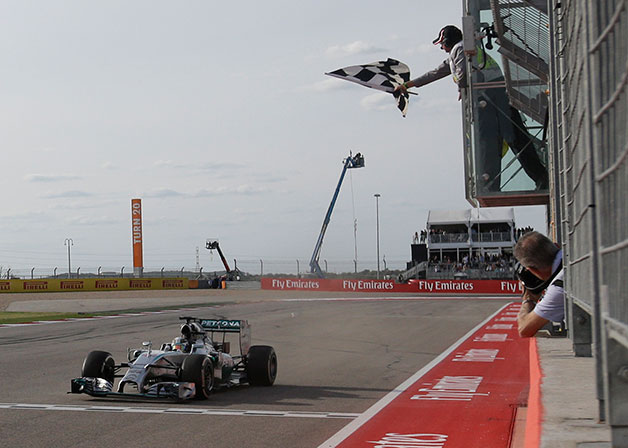 Lewis Hamilton's win gives him ten this season, makes him the winningest British driver in the sport, and puts him at 316 points in the Driver's Championship. Nico Rosberg falls a bit further behind, to 292 points, but he can't fall any further than that even if he sits out the last two races, with Daniel Ricciardo in third on 214 points.

The Constructor's Championship is wrapped up, and assuming Ricciardo keeps up his driving, Infiniti Red Bull Racing should be locked into second with 363 points at the moment, followed by Williams with 238. Ferrari fell further behind Williams, to 196 points, but put a little distance into McLaren, with 147 points, and Force India's double retirement means their seasonal second-half charge sputters once again, stuck on 123 points. 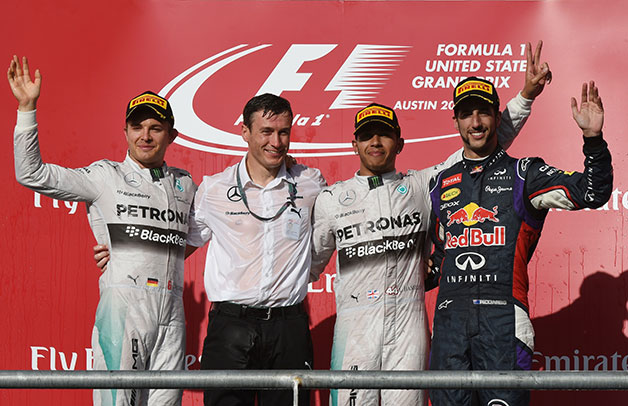 The next race is in Brazil on November 9. If there is such a thing as momentum, everyone will be expecting Lewis Hamilton to have plenty of it with him at Interlagos. We'll see you then.