BMW confirms limited i3 Electronaut Edition, says i5* is in development [UPDATE] Jacob Harb, head of electric vehicle operations and strategy for BMW, is excited these days. He's got a lot to sort out as the company's first large-scale production electric vehicle, the i3. Extending Electronaut leases, arranging tens of thousands of EV test drives and making sure there will be enough of the little city cars in the US when customer deliveries will start in May. Oh, and he's already working on the next BMW EV, which we think is likely to be the i5.

During the Detroit Auto Show this week, Harb declined to name the model (surprise) but he did tell AutoblogGreen, "You can probably take an educated guess at the next thought process, something a little bigger, maybe a little more range, relative to the i3. We've got everything trademarked and we're exploring the best, next iteration. It is coming. It's in development now." [ See update below.] An i5 has been rumored for years, but Harb said he's flying to Munich next week to "start the discussions further" on BMW's next-gen EVs.

But there's much more to do, given the upcoming i3 launch. For one thing, leases for the first participants in BMW's Active E electronaut program - which started in January 20121 - will end in the next week or so, and those who want to get an i3 – and an "overwhelming majority" have said they are interested - may get their leases extended so they don't have to revert back to a gas car in the meantime. BMW dealers will be able to start ordering the i3 in "the next few days" and the Active E Electronauts will get the first of those cars off the production line, "as a thank you to them for being part of this broad journey with us," Harb said.

There will also be a special Electronaut Edition of the i3, that will be upgraded from the standard i3 at not cost. Harb wouldn't say what's different, just that the "options and features" will serve to identify the car from the outside. It will be "as unique and compelling as possible," he said, with details coming in the next few weeks. The i3 is already on sale in Europe, the company won't start making US-bound vehicles until March. 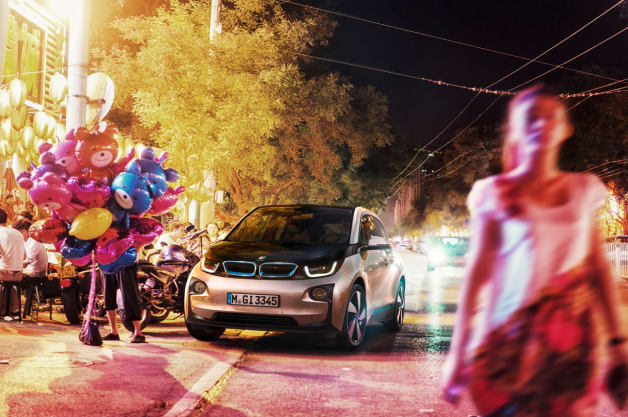 Since there are no official i3 orders in the system yet, Harb didn't know exactly what the split will be between pure EV and the range extender version, but that his estimate is 50/50. He also wouldn't talk about production numbers, but did say that. "It's full series production, there are thousands of units. We never talk about production of an X5 let alone the i3, but it is full series production, 50 state, like a normal car. If we need more, we can get more."


The Mini E was a crawl, the Active E was a walk and the i project is, finally, a run.

And there might be more, if BMW's promotional efforts pan out. At CES last week, for example, BMW conducted over 2,800 test drives over four days, Harb said, with some people waiting a half hour to get behind the wheel. There are 60,000 hand raisers, which means people who have taken a test ride or gone to the BMW i Facebook page or the official BMW website and requested more information. "We expected that demand would be pretty high in the United States so we have already started to explore what we need to do to get more volume," Harb said.

We likely would not be at 60,000 without the Electronauts and all those original Mini E drivers, Harb said. "From an infrastructure standpoint, we benefited a lot from the Mini E and the Active E," he said. "I always use a 'crawl, walk, run' analogy. So, it was crawl with the Mini E - there wasn't even J1772 then, there wasn't even a uniform format for public charging - and we cut our teeth with the Mini E and streamlined it with the Active E, rolling out a home solar unit and embraced that true EV lifestyle, and with i, now we run." We only have a few more months to see if it's a sprint or a marathon.

*UPDATE: So, it appears that different BMW messengers have different messages. BMW Product and Technology Communications' Dave Buchko told AutoblogGreen that what Harb said was not correct. While Harb never specifically said BMW was working on an i5 - he said we could make a guess the next i vehicle was "something a little bigger" - Buchko made clear that an i5 "is not a model in our pipeline at this point," Buchko said. "Jacob's suggestion of a BMW i model larger than the i3 is hypothetical at this point."