The 2013 Infiniti JX just went on sale this summer, but it's already experiencing some growing pains. The National Highway Traffic Safety Administration announced a recall for the all-new JX today for an issue that could leave drivers stranded. This recall, which begins on September 4, affects early JX models built between February 15 and June 22. That amounts to 7,842 units – through July, Infiniti has sold 9,724 JX models in total.

Infiniti's new luxury three-row crossover is being recalled due to a problem with a fuel line that can block the fuel level float that could yield an incorrect reading on the fuel gauge. With the gauge stuck at the same level, JX owners could run out of gas thinking they have more fuel than they do. Fortunately, the free fix for the problem is simply inspecting and, if necessary, rerouting the fuel line away from the fuel level float.

Summary:
Nissan is recalling certain model year 2013 Infiniti JX35 vehicles manufactured from February 15, 2012, through June 22, 2012. Due to an assembly issue, the fuel transfer tube may be misrouted inside the fuel tank. As a result, the fuel level float may be prevented from dropping as the fuel is consumed and the fuel guage may read a fuel level higher than actually exists.

Consequence:
If the fuel guage does not accurately show when the tank is becoming empty, the vehicle may run out of gas unexpectedly, stalling, and increasing the risk of a crash.

Remedy:
Nissan will notify owners, and dealers will inspect and re-route the fuel transfer tube and install a new O-ring, free of charge. The recall is expected to begin September 4, 2012. Owners may contact Nissan customer service at 1-800-647-7261. 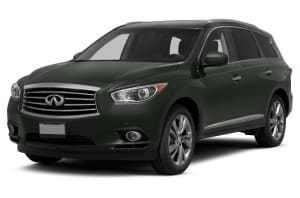