Coming soon to a select Ford dealer near you is the most efficient five-passenger car in America, the 2012 Ford Focus Electric, which the EPA has decided gets 105 miles per gallon equivalent, combined. This is better than what the Blue Oval was estimating publicly in December, when it said the all-electric Focus should get 100 MPGe. The Focus EV gets 110 MPGe in the city and 99 MPGe on the highway. As you can read in the press release after the break, Ford is using the official numbers to go after the Leaf for the all-electric passenger car market. Ford says its new electric car:

achieves a combined rating of 105 MPGe, topping Nissan Leaf by 6 MPGe while also offering more motor power, passenger room and standard features. Customers can make more use of this efficiency with Ford's faster charging technology that can recharge Focus Electric in about half the time of Nissan Leaf.

To compare with some other combined MPGe ratings for plug-in vehicles on the market or coming soon: the 2012 Chevrolet Volt gets 94 MPGe (one better than the 2011 model), the Toyota Prius Plug-In Hybrid gets 95 MPGe, the Nissan Leaf gets 99 MPGe, the Mitsubishi i is rated at 112 MPGe, and the current champion, the Tesla Roadster 2.0, officially gets 119 MPGe.

The EPA also says the Focus EV will have a range of 76 miles. As Ford is quick to point out, again, that's three miles more than the Leaf. Given the variances of EV ranges based on driving style and outside influences, those three miles won't make all that much real-world difference to most people, but it does give the engineering team one more thing to be proud about.

For all the comparisons Ford makes in today's announcement, it does leave one thing out: the Leaf's one big numerical advantage. The 2012 Leaf starts at just $35,200, while the Focus EV starts at $39,200.
Show full PR text
Ford Focus Electric Becomes America's Most Fuel-Efficient Five-Passenger Vehicle with 110 MPGe EPA Rating

Focus Electric bests Nissan Leaf in other ways, too – more passenger room and a faster charging system that allows for a full recharge in nearly half the time of Nissan Leaf.

"Ford is giving customers the power of choice for leading fuel economy regardless of what type of vehicle or powertrain technology they choose," said Eric Kuehn, chief nameplate engineer, Focus Electric. "The Focus and Fusion are great examples of how we transformed our fleet of cars, utilities and trucks with leading fuel efficiency."

The EPA-approved Focus Electric label also certifies that the car has a range of 76 miles on a single charge compared with the 73-mile range of the Leaf. The Focus Electric can be driven up to 100 miles on a single charge depending on driving habits. The average driver drives 29 miles a day, according to the Bureau of Transportation Statistics website.

The approved label also will say customers could save $9,700 in fuel costs over the course of five years compared with the average new vehicle. Comparative savings could go even higher if the current trend of rising gas prices continues. In California alone, the cost for a gallon of gas rose 20 cents in a seven-day period that ended last week.

Fuel-efficiency champs
Focus Electric is the flagship of Ford's transformed lineup that features 10 vehicles with leading fuel economy. Ford's other fuel-efficiency leaders include:

"We've been working for three years to make the Focus Electric America's most fuel-efficient vehicle of its kind," said Chuck Gray, Ford chief engineer of Global Core Engineering Hybrid and Electric Vehicles. "The entire group feels like a sports team that has just won a major championship. It's a good feeling to be at this point now."

Unlike competitors that have designed electric and hybrid vehicles from scratch, Focus Electric benefits from being based on the fuel version of Ford's global C-segment car.

"Focus Electric shares many of the same premium components and features as its gasoline-powered counterpart while delivering distinct efficiencies and a uniquely exciting driving experience," said Kuehn.

In addition to boosting quality, Ford's strategic decision to electrify vehicle platforms – instead of creating one-off vehicles – allows the company to offer customers more choices as part of its fuel-efficient product lineup.

Elec-tech
Focus Electric features an advanced charging system that allows the car's battery to fully recharge in four hours – nearly half the time of Nissan Leaf – using available 240-volt outlets that can be installed in residential garages.

Faster charging with 240 volts also can extend range as drivers can more quickly recharge between stops – up to 20 miles per charge hour – so they can significantly improve a car's range during a busy day of driving by recharging multiple times.

To cut charging costs at home, a unique value charging feature powered by Microsoft is designed to help owners in the U.S. charge their vehicles at the cheapest utility rates, which can make charging the Focus Electric less costly than charging the Nissan Leaf.

Tech sharing
Many of the technologies in Focus Electric are shared across Ford's electrified vehicle lineup. Some of the shared or soon-to-be-shared features include:

•SYNC® with MyFord Touch® offers multiple ways – including voice commands – for customers to manage and control their phone, navigation, entertainment and climate functions. Plug-in hybrids and all-electric models have additional options for monitoring information like battery state of charge
•MyFord Mobile enables access via smartphone or Web-based interface to perform key tasks, such as monitoring a vehicle's state of charge and current range or locating charge stations and planning routes to find them
•SmartGauge® with EcoGuide provides instantaneous fuel economy so drivers can adjust driving behavior accordingly if needed
•Regenerative braking captures and reuses more than 95 percent of the braking energy normally lost during the braking process
•Hybrid transmission, designed by Ford engineers in-house, is capable of operating at high speeds and in a smooth, fuel-efficient manner at the same time
•Lithium-ion batteries – the lithium-ion battery pack in Focus Electric is covered by an eight-year/100,000-mile component warranty
•Charge port (for electric and plug-in vehicles), conveniently located on the driver's side and near the front of the car, activates a light ring that illuminates the port twice when plugged in. The light ring then illuminates in quadrants as the car charges. Each quadrant represents 25 percent of the maximum battery charge
•Recycled fiber made from 100 percent post-consumer and post-industrial content is used in the seat fabric with the equivalent of 22 plastic, 16-ounce water bottles in each car

Production of the Focus Electric began in December 2011 at Ford's Michigan Assembly Plant in Wayne, Mich. More information about MAP can be found here.

Ford will ramp up Focus Electric retail production in the first half of 2012 for dealership availability in California, New York and New Jersey. By the end of 2012, Focus Electric will be available in 19 markets across the U.S.

More information about Ford's electrified vehicle lineup – including press releases, technical specifications and other related material – can be found online here. Photos of the Focus Electric can be found here.

About Ford Motor Company
Ford Motor Company, a global automotive industry leader based in Dearborn, Mich., manufactures or distributes automobiles across six continents. With about 164,000 employees and about 70 plants worldwide, the company's automotive brands include Ford and Lincoln. The company provides financial services through Ford Motor Credit Company. For more information regarding Ford and its products worldwide, please visit http://corporate.ford.com. 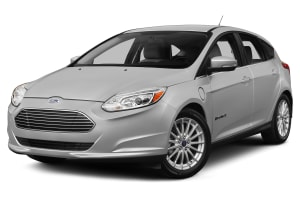