Toyota has boosted the miles-per-gallon-equivalent (MPGe) ratings for the Prius Plug-in hybrid-electric that it plans to debut in the U.S. next month. The Japanese automaker now estimates that the car will get 95 MPGe in its all-electric mode, up from its prior estimate of 87 MPGe, according to Toyota Division Group Vice President Bob Carter and cited by multiple media outlets.

Once the plug-in goes through its 15-mile all-electric range, the car will get 50 miles per gallon from its hybrid-electric powertrain, up from Toyota's prior estimate of 49 MPG.

By comparison, the most fuel-efficient car sold in the U.S. is the Mitsubishi i battery-electric vehicle, which gets an EPA-rated 112 MPGe. The Nissan Leaf battery-electric gets 99 MPGe while the Chevrolet Volt extended-range plug-in is rated at 60 MPGe. 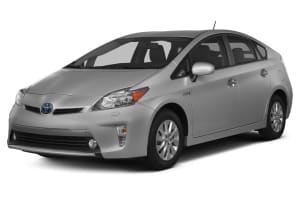