It will enter production halfway through 2022

Ford recently announced the electric F-150 will be the most powerful version of the 14th-generation truck. It released a dark preview image that indicates it will also be the most futuristic-looking member of the range.

Although the yet-unnamed electric F-150 will share its basic underpinnings with the new-for-2021 pickup, it will stand out with a powertrain-specific front-end design characterized by a thick, table-shaped LED strip that surrounds the headlights and the grille. Its lights look smaller than the ones seen on the gasoline- and diesel-powered models, and it appears to wear a new-look grille with three-dimensional elements. We can't tell if the grille is purely cosmetic or if it lets air through, though the Mustang Mach-E design suggests it's likely the former. The idea that electric vehicles don't need cooling is false, so there may be air dams positioned below the grille.

Power for the electric F-150 will come from a pair of electric motors (one per axle) linked to a lithium-ion battery pack. It will be the fastest-accelerating truck the company has ever built, which is an impressive claim considering the next-generation Raptor will allegedly receive a 5.2-liter V8 supercharged to anywhere between 725 and 750 horsepower. It will also offer a generously-sized frunk, plus competitive towing and payload ratings.

Ford is injecting $700 million into its River Rouge Complex in Dearborn, Michigan, to build the electric F-150, and production is scheduled to start halfway through 2022, meaning it will arrive on dealer lots as a 2023 model. When it lands, it will compete in the same burgeoning segment as the Rivian R1T, the GMC Hummer EV, the Tesla Cybertruck, and a Chevrolet-branded model, among many others. While pricing information hasn't been released yet, the battery-powered variant will very likely be one of the most expensive versions of the F-150. 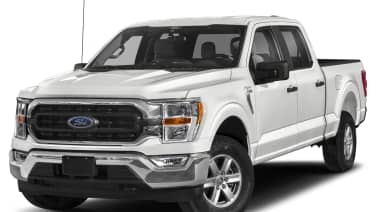 $47 - $1,690 Nat'l avg. savings off MSRP
See Local Pricing
I'm not in the market for a vehicle at this time. Please move this suggestion to the side for 30 days.
Huge Savings